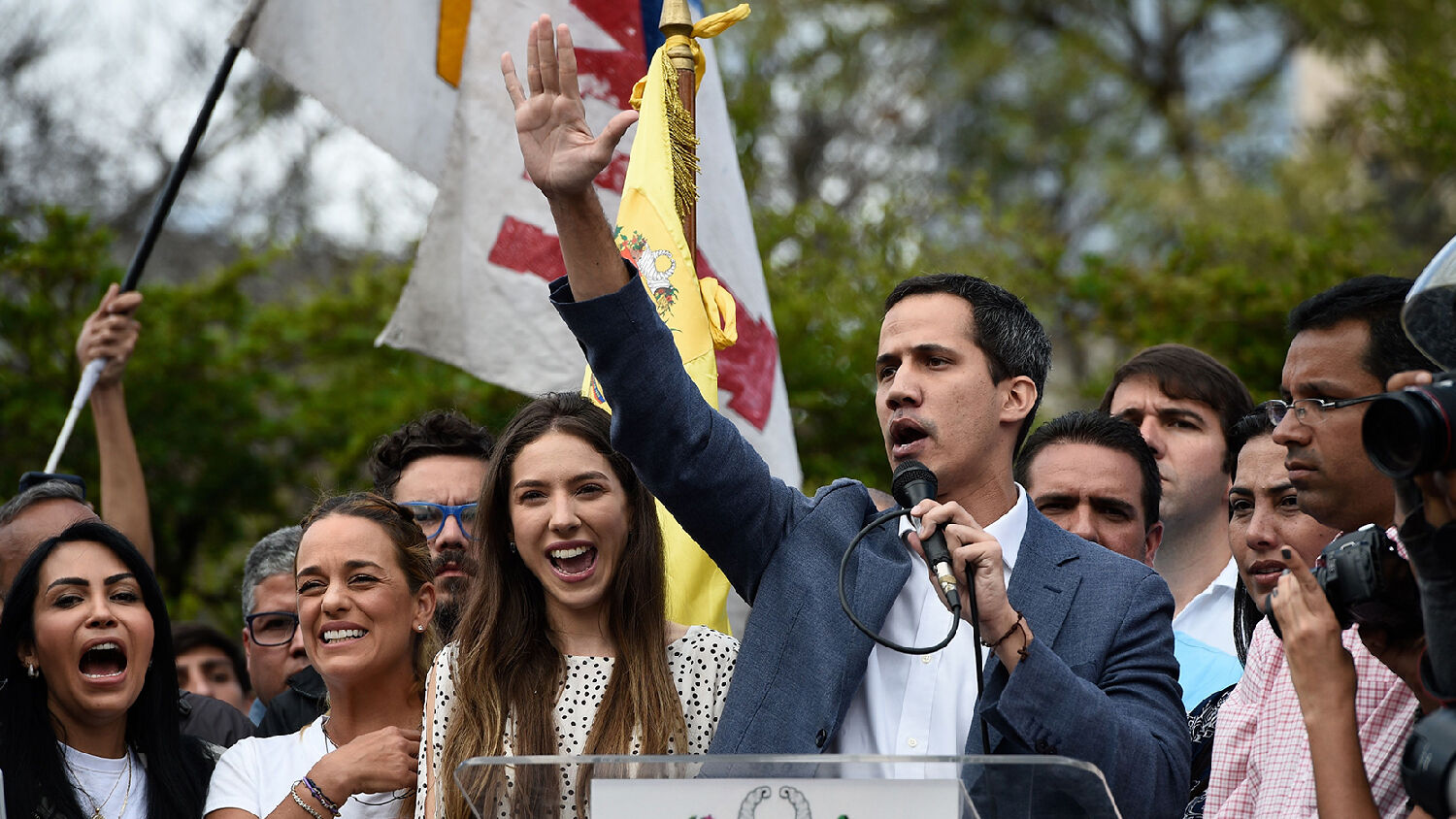 The head of Venezuela’s National Assembly and the country’s self-proclaimed “acting president,” Juan Guaido, speaks to a crowd of supporters in Caracas on January 26.
FEDERICO PARRA/AFP/Getty Images

Outside geopolitical blocs have differing goals for the nation.

Venezuelan opposition leader Juan Guaido declared himself the interim president of Venezuela on Wednesday, two weeks after incumbent President Nicolas Maduro was sworn in for a second six-year term. Since Maduro’s reelection was marred by claims of vote rigging, Guaido has labeled him an illegitimate president and called for free and fair elections. United States President Donald Trump has recognized Guaido as Venezuela’s legitimate leader, as have government officials in the European Union, Canada, Brazil and 10 other Latin American countries. But Venezuela’s military still backs Maduro, as do the governments of Cuba, China, Iran and Russia.

Now that Venezuela has two competing presidents, protesters in this impoverished country are pouring into the streets. Several people have been killed in clashes with government forces. In an attempt to bring peace to the nation, Guaido has offered Maduro amnesty if he goes into exile. Security experts are unsure about how this situation will play out.

The Bible, however, gives us a strong indication of Venezuela’s future. A decade ago, Trumpet editor in chief Gerald Flurry forecast the formation of a brief economic alliance between a German-led European Union and major Asian powers. This forecast is based on a prophecy in the biblical book of Isaiah. In Isaiah 23:1, China is referred to by its ancient name, Chittim. And in verse 13, Germany is referred to by its ancient name, Assyria. These two economic powerhouses are going to team up against the modern-day descendants of ancient Israel (the United States and Britain, primarily).

(All of these biblical identities are explained in Mr. Flurry’s booklet Isaiah’s End-time Vision and the late Herbert W. Armstrong’s book The United States and Britain in Prophecy.)

Logistically, the U.S. cannot truly be blockaded unless Latin America participates. Some of the most vital shipping and supply lines to America flow through the Caribbean Sea into the Gulf of Mexico. That is why Mr. Armstrong prophesied that Europe would draw a lot of power from an alliance with Latin America. His Plain Truth magazine stated in May 1962 that “the United States is going to be left out in the cold as two gigantic trade blocs, Europe and Latin America, mesh together and begin calling the shots in world commerce.”

Venezuela’s language (Spanish) and religion (Roman Catholicism) make it a natural ally of the EU. If Maduro is forced into exile, it is likely that opposition forces will realign their country toward Europe and the U.S., and away from Russia and China. But ultimately, the Bible reveals that Europe will turn its back on the U.S., make common cause with Russia and China, and use its Latin American allies to besiege and invade North America.

Consider the following quote from Chapter 7 of Isaiah’s End-Time Vision:

With a German-led Europe (the king of the north) possessing great maritime power, North America will be surrounded on the east by Europe and the south by Latin America. The Bible contains many prophecies of that European power attacking America—and many other prophecies of America being besieged. That is where China and the giants of Asia enter the picture. When the Holy Roman Empire attacks North America, there will be no help or sympathy from Asia. In fact, considering that China has come to possess most of the world’s strategic sea gates (which, ironically, at one time were held by Britain and America), we believe there may be a brief alliance between the German-led Holy Roman Empire and certain Asian powers (Russia, China, Japan—the kings of the east). Should Europe, the resurrected Holy Roman Empire, find a way to take advantage—even for a moment—of key resources and strategic holdings of China, Russia and Japan, it would have more than enough power to besiege the Anglo-Saxon nations and enslave them.

The current turmoil in Venezuela will give Germany and the Vatican an opportunity to increase their influence in Latin America. This is just one more step toward the time when foreign enemies will lay siege to the United States. Yet there is great hope in this 2,700-year-old prophecy. The same God who prophesied the rise of an economic bloc against the United States, has also prophesied the fall of that bloc. The whole context of Isaiah 23 is about the time when God destroys this mart of nations and sets up His own Kingdom in its place.