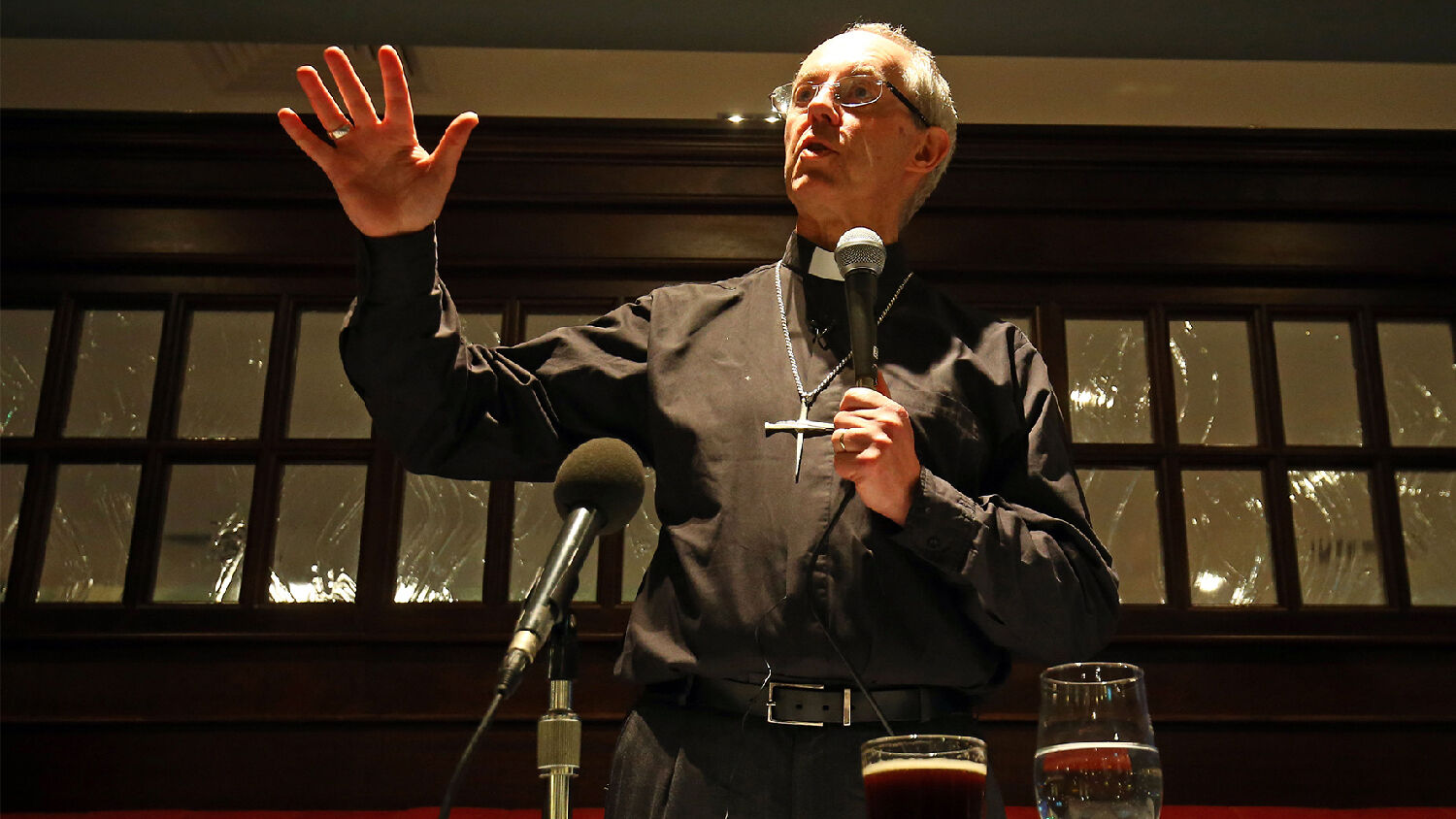 Archbishop of Canterbury Justin Welby takes part in a question and answer session with locals at the Wetherspoons Royal Victoria Pavilion in Ramsgate, Kent.
Gareth Fuller/PA Images via Getty Images

Is the ability to ‘speak in tongues’ evidence that a person has received the Holy Spirit?

“I pray in tongues every day,” said archbishop of Canterbury Justin Welby in an interview with Premier Christian Radio published on January 18.

Welby has previously said that he first started speaking in tongues at age 19 after becoming “overwhelmed by the love of God” while studying the New Testament.

Now he is the most senior bishop in the Church of England.

“It was from that moment and in the days that followed I realized that the Holy Spirit of God had touched me in a very powerful way,” he said in a 2015 interview with Anglican Communion News Service. “I began to speak in tongues and began to learn of the intimacy that Christ brings to us.”

Welby is far from the only Christian who speaks in tongues.

For some charismatic evangelical groups, such as Welby’s home church of Holy Trinity Brompton, and for many Pentecostal Christian denominations, “speaking in tongues” is a central tradition.

There is even evidence that the practice is growing in popularity in the United States.

Those who engage in tongue-speaking—or glossolalia as it is formally called—claim it is a Bible-based practice that demonstrates the presence of the Holy Spirit in them. Usually this is manifested by people in the congregation bursting into utterance of unintelligible syllables, or as in Welby’s case, speaking such sounds in private prayer.

Linguist William Samarin defines glossolalia as a purely physical phenomenon. It is “unintelligible extemporaneous post-babbling speech … without having consistent syntagmatic structure and that is not systematically derived from or related to known languages,” he writes in Language in Society.

What is the truth about speaking in tongues?

Is it evidence of the Holy Spirit—or babble? Is it necessary for salvation—or is it nonsense? Could it be dangerous? What do the Scriptures say, and how does that apply to those striving to follow Christ today?

It is important for us to “prove all things” (1 Thessalonians 5:21) on this topic, by studying what the Bible says about it.

Acts 2 describes the day of Pentecost in a.d. 31 when the 120 people who had been converted during Christ’s ministry (Acts 1:15) were assembled in Jerusalem. This was the day when the Holy Spirit was, for the first time, imparted to a multitude. Acts 2:1-4 read:

And when the day of Pentecost was fully come, they [the 120] were all with one accord in one place. And suddenly there came a sound from heaven as of a rushing mighty wind, and it filled all the house where they were sitting. And there appeared unto them cloven tongues like as of fire, and it sat upon each of them. And they were all filled with the Holy [Spirit], and began to speak with other tongues, as the Spirit gave them utterance.

Many modern tongues-speakers say they are repeating and replicating the early Church’s experience described in this passage. But the late Herbert W. Armstrong explained in his book Mystery of the Ages that the situation in Acts 2 was utterly unique:

Never has such a supernatural display occurred before or since. Yet the modern sect calling themselves “Pentecostal” claims to repeat this experience.

But in their meetings no such sound comes from heaven. No supernatural divided tongues of flaming fire sit on their heads. Some do break out in a kind of gibberish supposed to be some foreign language, but emphatically not anything like that happened on this one day of Pentecost in a.d. 31.

Acts 2 continues showing that those who witnessed the 120 being given the Holy Spirit and then heard them speak were from numerous nations. Egyptian Jews were present, as well as Greeks, Mesopotamians, Libyans, Medes, Cretans, Parthians, Romans and more. The remarkable thing was that “every man” from these various and far-flung locations heard the disciples who had received the Holy Spirit “speak in his own language” (verses 5-13).

Mr. Armstrong emphasized that this makes the account described in Acts 2 entirely unlike the modern “speaking in tongues” practice:

Today, in “Pentecostal” meetings one person may break out in a kind of gibberish that others in the meeting do not understand.

Mr. Armstrong pointed to a related passage in 1 Corinthians 14:27-28, which modern tongue-speakers also claim to be emulating. It says: “If any man speak in an unknown tongue, let it be by two, or at the most by three, and that by course; and let one interpret. But if there be no interpreter, let him keep silence in the church; and let him speak to himself, and to God.”

He explained that this is not discussing languages unknown to mankind, as many Pentecostals argue, but foreign tongues unknown to the bulk of the people present at the meeting. “It says if one speaks in a foreign language there must be an interpreter so the others can understand,” Mr. Armstrong wrote.

Mr. Armstrong went on to say that he would often use interpreters himself in such situations: “When I speak to an audience in Japan or some other country, I always have an interpreter who will interpret into the language of that country, every few words, my message in their language. When I speak in this kind of ‘tongues’ I speak with understanding, and the people get the message.”

Mr. Armstrong continued with some pointed words, but he wrote out of a genuine desire to help people worship God in spirit and in truth (John 4:24):

“Pentecostal” people have been deceived into thinking that one is what they called “saved” when one receives Jesus Christ as his personal Savior. They consider “the baptism of the Holy Spirit” evidenced by speaking in “tongues” as a subsequent imbuement of power. I have had a great deal of experience with these people. This “baptism” as they call it seems to loosen their tongues in what they call an “imbuement with power,” which, in practice, means power to speak emotionally, often braggingly.

He continued, saying, “The above explanation will not change those already hooked on this deception, but hopefully it will prevent others from becoming misled by this counterfeit emotional ‘spirituality.’”

In his 1970 booklet The Tongues Question, Mr. Armstrong wrote about how the modern practice of “speaking in tongues” can sometimes go beyond nonsensical babbling and enter dangerous spiritual territory. “If one … has been unsuspectingly lured into seeking what the Bible nowhere tells us to seek—‘tongues’ and physical sensations and thrills pleasing to the sensual self—then that one is caught off guard and becomes an open channel through which an evil spirit may enter and possibly take full possession of the mind,” he wrote. “There are fallen angels, demons, and without a question many today are speaking in the ‘tongues’ of these demons.”

Mr. Armstrong continued explaining what a person striving to worship God in truth should work toward instead of prioritizing speaking in tongues. He wrote:

He explained that while “speaking in tongues” can be feigned and counterfeited, the “fruits” embodied by true Christians cannot be. He wrote:

[T]he fruits of the Holy Spirit—love, joy, peace, patience, kindness, gentleness, goodness, meekness (most “tongues” people are not meek, but loud-mouthed and bragging), temperance, faith— these things in one’s life cannot be counterfeited. They are not natural. No one has sufficient willpower to force himself to show always these fruits in his life. It requires the miracle of the love of God shed abroad in our hearts by the Holy Spirit (Romans 5:5). Satan has no counterfeit for that!

Mr. Armstrong wrote that the “lives we live” serve as “the biblical evidence of whether or not we have received the Holy Spirit.”

Mr. Armstrong also recognized that the Bible discusses some genuine instances of the practice in Acts 10-11 and 1 Corinthians, which occurred years after the a.d. 31 Pentecost. But he emphasized that it was common human languages of the day that the converts were suddenly, miraculously speaking. He wrote: “We should banish all prejudice against the true manifestation of tongues which is the ability to speak in real languages. But we should get the tongues into the proper scriptural place of importance.” Continuing, he wrote, “Paul said he would rather speak just five words with his understanding, that he might teach others also, than ten thousand words in an unknown tongue” (1 Corinthians 14:19).

Mr. Armstrong concluded his booklet, writing: “Let us yield to God, and His Word. Let us seek more of His love, more of His faith, a better understanding, more power of service! And let us leave manifestations and feelings to Him!”

To understand the life-long process of yielding to God and learning to worship Him in spirit and in truth, order your free copy of Mr. Armstrong’s potentially life-changing book Mystery of the Ages.