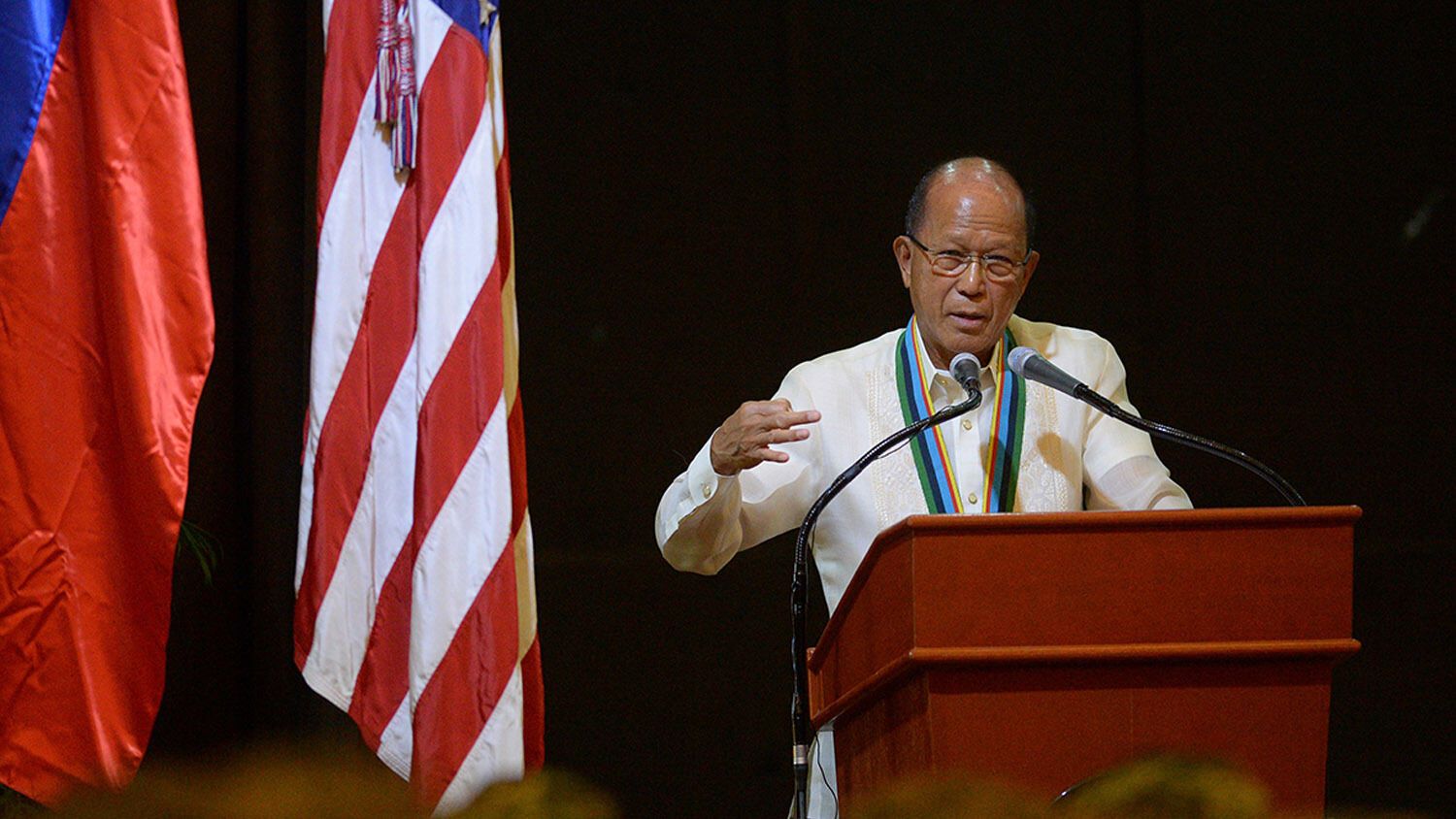 Philippine Defense Secretary Delfin Lorenzana delivers a speech during the closing ceremony of the annual joint U.S.-Philippines military exercise in Manila on May 19, 2017.
TED ALJIBE/AFP/Getty Images

China could gain a major victory in the region if the 67-year-old U.S.-Philippines Mutual Defense Treaty is revised.

The government of the Philippines is considering revising the country’s Mutual Defense Treaty with the United States. The review will aim to decide whether “to maintain it, strengthen it, or scrap it,” Defense Secretary Delfin Lorenzana said on December 28.

The 1951 treaty between the Philippines and the U.S. requires each nation to support the other if either is attacked. Under this treaty, the Philippines has been protected by the world’s superpower for a lifetime.

But times have changed. And many officials are questioning the relevance of the document. “That’s 1951. It’s a 67-year-old treaty. Is it still relevant to our national interest? That’s what we should look at. Let us look at it dispassionately, without considering about past ties, about future ties—dispassionately,” Lorenzana said, hinting at the possibility of scrapping the treaty. “There was this raging Cold War. There was a Cold War then. Do we still have a Cold War today? Is it still relevant to our security? Perhaps not.”

China’s expansionist behavior and America’s unwillingness to confront China is leading the Philippines to consider revising the treaty. Many analysts see public statements by Philippine leaders questioning the treaty as a bold declaration that if the U.S. doesn’t stand up to China and protect its allies in the region, the Philippines will scrap the treaty.

“With regard to the West Philippine Sea [South China Sea] dispute, which is the most pressing security issue now, the U.S. has opted to assume a seemingly hands-off attitude. We hope to hear a definitive stand on the matter,” Philippine Rep. Gary Alejano said.

“Now that U.S. military presence in the area has been drastically reduced, China is claiming the entire South China Sea as its own!” Trumpet editor in chief Gerald Flurry wrote in the July 2016 issue. He continued:

Each year, $5.3 trillion of trade passes through the South China Sea. That is roughly one third of the world’s maritime commerce! Since Japan’s defeat in World War ii, America has protected this vital trade route and brought peace to this part of the world. Now the American military is retreating, and other great powers are coming in to fill the vacuum. …

Mr. Flurry’s analysis is based on specific end-time Bible prophecies. Ezekiel 4 describes a time just before the Great Tribulation, an end-time period of unparalleled war and suffering. Verse 3 reads,”[S]et thy face against it, and it shall be besieged, and thou shalt lay siege against it. This shall be a sign to the house of Israel.” Mr. Flurry explained that this passage does not refer to the Jews, “but to the modern descendants of [ancient] Israel, specifically the United States and Britain.” He said that this passage “pictured a siege against the house of Israel.”

Isaiah 23 gives more details about this economic siege. It shows that a brief economic alliance between a German-led European bloc and major Asian powers will form to cut the U.S. and Britain out of world trade. The Bible calls this Eurasian alliance the “mart of nations.” Mr. Flurry continued:

To understand more about this subject, please read Mr. Flurry’s article “China Is Steering the World Toward War.”