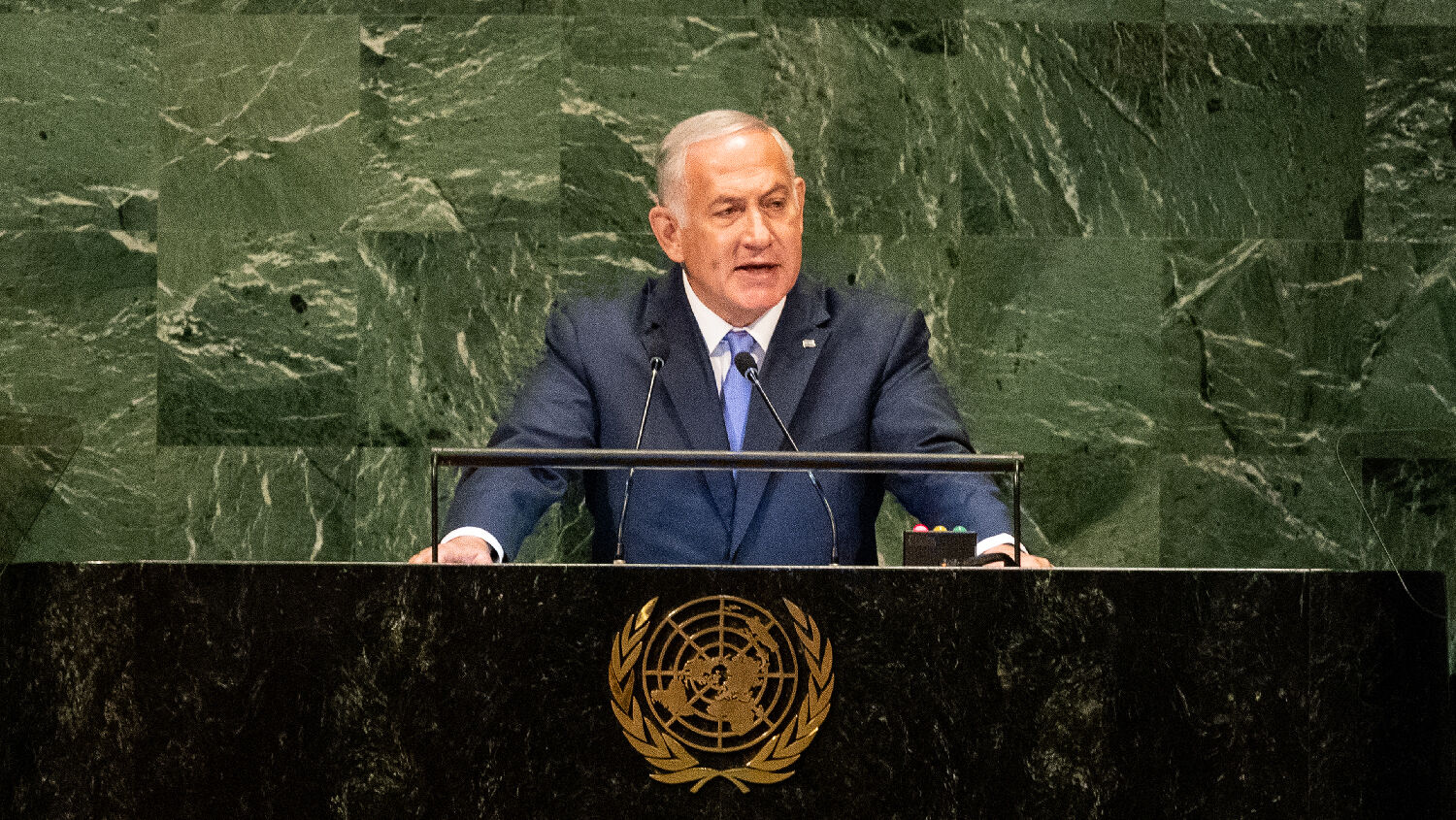 Israel stands against anti-Semitism as it formally leaves unesco.

The first day of January brought about more for the United Nations Educational, Scientific and Cultural Organization (unesco) than just a new year. Israel has officially pulled out of unesco. The Jewish state’s formal exit went into effect at 12 a.m., Paris time (unesco’s headquarters is located in Paris, France).

Starting in October 2017, Israel, along with the United States, threatened to leave unesco due in part to its anti-Israel bias.

“In withdrawing from unesco in 2017,” said Israeli Prime Minister Benjamin Netanyahu, “Israel and the United States made a clear moral statement that unesco’s anti-Semitism will no longer be tolerated. If and when unesco ends its bias against Israel, stops denying history, and starts standing up for the truth, Israel will be honored to rejoin. Until then, Israel will fight anti-Semitism at unesco and everywhere else.”

unesco hosted an event on anti-Semitism on September 26 in hopes that it would encourage Israel to reconsider its stance. But Prime Minister Netanyahu refused to attend the event, saying that the UN organization “must do more than host a conference on anti-Semitism. It must stop practicing anti-Semitism. And it must stop the absurdity of passing resolutions that deny the connection between the Jewish people and the land of Israel, between the Jewish people and our eternal capital, Jerusalem.” He pointed out that, despite hosting a conference on how to deal with anti-Semitism, unesco has passed 71 resolutions since 2009 that are critical and condemning of Israel. In the same time period, unesco has passed only two against all other nations combined.

Besides these 71 critical resolutions, the UN organization has also put forward other documents, which it passed in a compromised manner meant to encourage Israel to rethink its departure from unesco: Rather than being officially voted on, these resolutions were passed as having no legal status. However, the documents still display unesco’s hostility and double standard toward Israel.

One annex, passed in October 2018, follows suit with others as it refers to Israel as the “occupying power” in Palestinian territories. It states that it “[d]eeply deplores the ongoing military developments around the Gaza Strip and their heavy toll of civilian casualties,” ignoring the fact that many of these “civilians” belong to or work with the Hamas terrorist group and are actively trying to illegally break into Israeli territory, send flaming balloons descending into Israeli fields, and in some cases, firing at Israeli troops.

Another document references its “deep concern” over “Israeli censorship of the Palestinian curricula of schools and universities in East Jerusalem.” Once again, some very important details are left out of this critique, specifically that those Palestinian curricula refuse to teach the Jewish people’s historical connection to the land of Israel and leave out biblical names vital to Israel’s history.

unesco—and the UN as a whole—seems to be lacking any condemnation for the hundreds of rockets fired by the Palestinian terror group Hamas into Israeli civilian areas. It is this double standard and hostility toward the Jewish state that Israel is addressing through its withdrawal from unesco.

In his criticism of unesco, the prime minister is joined by Israel’s permanent representative to the United Nations, Danny Danon. Danon has been an outspoken critic of the organization, saying on January 1 that it is guilty of “continually rewrit[ing] history,” and is “manipulated by enemies of the Jewish state.”

Besides the resolutions that unesco has passed condemning Israel, the organization has also labeled historical Israeli sites, such as the Tomb of the Patriarchs and Rachel’s Tomb, “Palestinian heritage sites.”

Israel’s former ambassador to the United States, Michael Oren, also decried unesco’s condemnations against his country. “unesco,” he said, “has joined a long list—Assyrians, Babylonians, Greeks, Romans, ayatollahs—who deny the eternal connection between the Jewish nation and its capital of Jerusalem. We will be in our capital forever and unesco, like all those who came before it, will fail.”

Former U.S. Ambassador to the UN Nikki Haley tweeted about the United States’ withdrawal from unesco (which was made official at the same time as Israel’s), writing, “unesco is among the most corrupt and politically biased UN agencies. Today the U.S. withdrawal from this cesspool became official.”

UNESCO is among the most corrupt and politically biased UN agencies. Today the U.S. withdrawal from this cesspool became official. #USStrong❤️

The Jewish people have faced centuries of hatred and prejudice in the form of anti-Semitism and, since the formation of the nation of Israel, anti-Zionism. unesco’s example is just one of many instances of anti-Semitism in the world. It is part of a larger trend that the Trumpet watches. Specifically, we watch the rise of anti-Semitism in Europe, as it has direct ties to Bible prophecy.

In order to understand biblical prophecy, one must first understand the prophetic identity of nations. In prophecy, Israel refers mainly to Ephraim and Manasseh, or Britain and America, respectively. Judah refers to the Jews, or the modern-day nation of Israel. You can read our free book The United States and Britain in Prophecy, by Herbert W. Armstrong, for proof.

Hosea 5:13 reads, “When Ephraim saw his sickness, and Judah saw his wound, then went Ephraim to the Assyrian, and sent to king Jareb: yet could he not heal you, nor cure you of your wound.” Judah’s, or modern-day Israel’s, “wound” is the fruitless peace process that Israel has embarked on, starting in 1993 with the Oslo Accords. (Our free booklet Jerusalem in Prophecy can prove this to you.) Since then, Israel has given up valuable territory in return for a promise of peace that has not been kept. Israel still suffers disruptive and deadly terror attacks on a regular basis—often launched from or organized in the very land that it gave away.

With a terrible wound such as this, Israel is going to turn “to the Assyrian,” or to Germany, for help. (Request a free copy of our booklet Germany and the Holy Roman Empire to understand Germany’s ancient roots.) In his Sept. 7, 2006, article, “The Outcome of the Israeli-German Relationship,” Trumpet editor in chief Gerald Flurry wrote, “Lange’s Commentary states that the word Jareb, the German leader, means ‘warlike monarch.’ The Soncino commentary translates it as ‘King Contentious.’”

Daniel 8:23 calls this Assyrian leader a “king of fierce countenance.”

Why would Israel turn to Germany for help against its mounting Middle Eastern foes? Why not rely on America, its staunchest ally since its founding in 1948? After all, doesn’t it seem like Israel and America are very close, with both nations pulling out of unesco on the very same day, and America standing with Israel against the scourge of anti-Semitism?

Why would Israel put its trust in the nation that is guilty of the most heinous crime against the Jews in modern history, this “king of fierce countenance”?

In Zechariah 11:14, God says that He will “break the brotherhood between Judah and Israel.” Even now, as we see America standing with Israel against unesco, we also see America abandoning Israel in the Middle East. U.S. President Donald Trump has recently announced the removal of U.S. troops from Syria, leaving many Israelis fearful of a stronger Iranian presence in the region. Prior to this was the complete withdrawal of American troops from Iraq in 2011.

Former U.S. President Barack Obama did even more damage during his administration by reaching out to the Muslim world. Trumpet executive editor Stephen Flurry wrote in his article “Five Prophecies to Watch,” “President Obama went to Cairo in search of a ‘new beginning’ in the relationship between the United States and the Muslim world. By doing so, the U.S. effectively ended its brotherly and strategically critical alliance with Israel. That ‘unbreakable’ bond between America and Israel, the president’s assurances notwithstanding, is now broken. Israel knows it has been abandoned by the United States.”

Without other recourse, Israel will turn to Germany for protection. But that new alliance will not go the way Israel hopes. Gerald Flurry continued in his 2006 article:

This double cross that Mr. Flurry referred to is found in Psalm 83. “They have said, Come, and let us cut them off from being a nation; that the name of Israel may be no more in remembrance. For they have consulted together with one consent: they are confederate against thee” (verses 4-5). The following verses go on to list a group of nations led by Assur, or Germany, that seeks to bring this utter destruction upon the nations of Israel.

We see the same background of widespread hatred toward Israel today.

German-led Europe and its allies will be guided by the same, although greater and more focused, anti-Semitism that we see Israel fighting in unesco right now. God Himself is using this persecution to correct Israel for its sins! But in that very fact lies the hope. As soon as the people of Israel realize and repent of their sins, the punishment will be complete and God will be able to use the nations of Israel to fulfill their original purpose.

Mr. Flurry writes in his free booklet Great Again: “When God chose the biblical nation of Israel, He intended it to be an example and a blessing to all nations, leading them into a relationship with Him (read passages like Deuteronomy 4:5-8). Though that nation failed, the goal that God had for Israel anciently is still one He intends to accomplish. God still wants Israel’s descendants to fulfill the glorious purpose of serving as a shining example to the world! And one day soon, they will be!”

There will come a day when anti-Semitism will be a thing of the past—when all nations will admire the example that Israel sets in following God’s law, but that day can only come after the nations of Israel turn to God wholeheartedly.