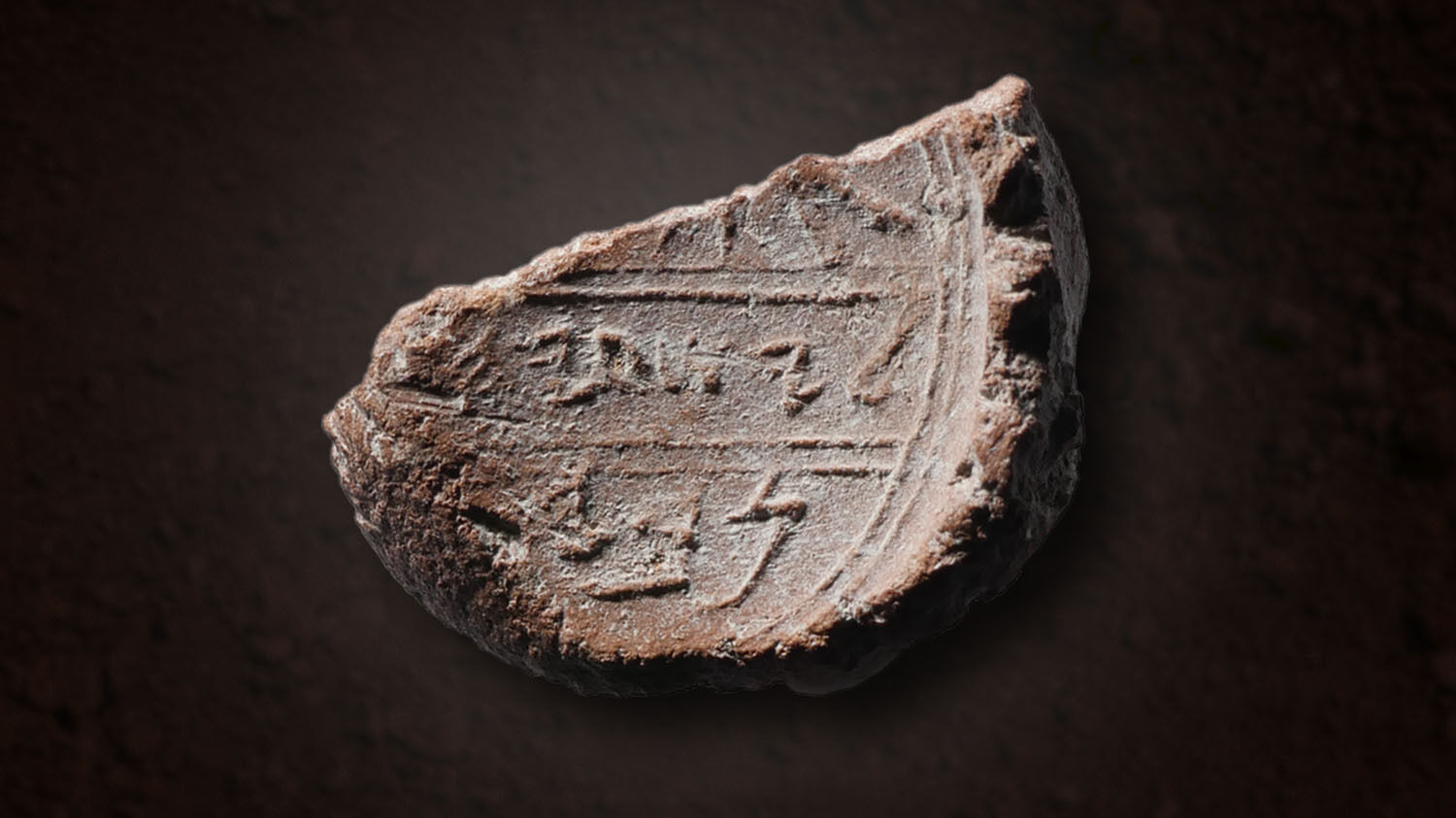 This is the season when journalists in various fields rush to post their recaps of the year’s most important events.

This is the season when journalists in various fields rush to post their recaps of the year’s most important events. Here in Israel, a couple of lists have already been posted, summarizing 2018’s important news in the world of archaeology.

Today at WatchJerusalem.co.il, the sister site of theTrumpet.com, we posted our own: “Top Discoveries in Biblical Archaeology 2018.”

I have read a couple such articles over the past few days. They list some of the same discoveries we do. But what stands out to me, and astounds me, is that only our website features the discovery of the seal impression of the Prophet Isaiah.

How is the actual signature of Isaiah the Prophet not the biggest archaeological news of the year, across the board?

The Isaiah bulla was unearthed in 2009 by Dr. Eilat Mazar on the first phase of renewed excavations at the Ophel. Its inscription was deciphered over the following years, with more concentrated research beginning in 2014. Its significance was announced to the public on Feb. 22, 2018. (I remember the date, because we ran the story two hours before my son was born.)

But February 22 was a big day for biblical archaeology as a whole. It was the day the world found out that we have discovered the first provenance of a biblical prophet, a prophet who has a biblical book named after him.

The main reason this bulla (tiny clay seal) was studied so intensively for several years was because it is partially damaged. It clearly reads “L’Yeshaiahu,” followed by a damaged portion, followed by “Navi,” then another damaged portion. The very first impression of anyone able to read ancient Hebrew is, Wow, that says Isaiah the Prophet. That is clearly the most logical explanation, but some have challenged it, saying that it might just mean “Isaiah From Nav.” However, a careful study of the writing style, the space for a couple of missing letters, and most importantly the context in which it was found—near the seal impression of King Hezekiah—all show that this was Isaiah’s seal.

As Dr. Eilat Mazar has said, given the evidence, how can this not be Isaiah the prophet?

If you, like me, value a rigorous scientific study, then it’s worth reading the article linked above to show how, without a doubt, this bulla belonged to Isaiah the prophet.

Christopher Eames summarizes what any objective archaeologist would conclude, given the evidence, in “Top Discoveries in Biblical Archaeology 2018.” He wrote, “This is the single greatest item of 2018—and surely, one of the greatest discoveries in a long time.”

And yet, the seal of Isaiah the prophet received not so much as a mention in some of the other lists of important 2018 archaeological discoveries.

And unfortunately, this is not the only attempt to write Isaiah out of the history that I observed this week.

The archaeologists found a massive, 2,700-year-old town from the time of King Hezekiah. Now the state must decide whether to keep the ruins as a tourist site or cover them up and build the road over the top. That this is even a debate speaks to the sheer wealth of archaeological material in Israel from the biblical period.

While that debate is good and well, it was the authors’ retelling of the history of Hezekiah and Isaiah in the article that was depressing.

The archaeologists discovered a massive destruction from the time of Hezekiah, which matches the accounts from the Bible and Assyrian annals of the destruction King Sennarcherib wrought when he barreled into the region besieging and torching every Jewish town he came across.

But what shocked the archaeologists was the discovery that the town was almost immediately rebuilt to a similar magnitude. “Big surprise,” archaeologist Dr. Zvi Lederman told Haaretz. “Beit Shemesh shows clearly that the settlement returned, big time, in the very years everyone thought the area had been empty.”

This is a shock because archaeologists assumed that the Jews who survived the disaster would have stayed in the high country near Jerusalem and not ventured far away from it, for fear of the Assyrians. Instead, the inhabitants of Beit Shemesh were confident enough to set about the task of rebuilding their town.

This is the type of boldness you would expect after the Jews had just experienced deliverance from Sennacherib’s army by God’s miraculous hand. Sadly, that reason isn’t even presented as an option in the Haaretz piece. In fact, God’s hand in delivering the Jews is not mentioned in the article at all.

This is how Haaretz summarized this momentous event in biblical history (emphasis added): “The Jewish rebellion did not go well. The infuriated Assyrians counterattacked, razing cities up and down the coast and besieging Jerusalem itself in 701 B.C.

“The Assyrians were in the habit of obliterating rebels from the face of the planet: The kings of cities such as Tyre and Ashkelon were slaughtered. Yet for some reason, Sennacherib spared Hezekiah.

“One theory is that while camped outside Jerusalem, the Assyrian forces were struck by rodent-borne plague. Another is that Hezekiah bribed Sennacherib to spare the city and himself. The fact is, Lederman says, we have no idea why the brutal Assyrian leader spared Hezekiah.

“‘It was very strange and highly uncharacteristic of the Assyrians to let Hezekiah survive,’ Lederman says. ‘The Assyrians had to be cruel: Their wars were very brutal, because they had a huge empire, and it was a small people with a small army, so they had to leave an impression. Having said that, Hezekiah remained king, which is astonishing.’”

They admit that something astonishing occurred. For some reason, King Hezekiah was spared, but they have no idea why. Maybe rats. Maybe cash.

In one fell swoop, Haaretz wrote God out of one of His most powerful interventions in biblical history.

But that’s not all.

The authors also wrote, “Lederman marvels at Hezekiah’s survival. He had to have been one of the smartest monarchs the kingdom had, and doesn’t get the respect he deserves, the archaeologist argues.

“‘He lived and ruled during a traumatic period for the people of Israel. In his lifetime, he saw how the city of Samaria, Israel’s capital, was destroyed. He saw the 10 [biblical] tribes sent into exile, saw the refugees, saw the deaths and heard of the Assyrians,’ Lederman says. ‘It must have been terrifying. However, he was a very entrepreneurial king: He seized the moment. He had a special opportunity to turn his little kingdom into something more important, and he did it well.’”

It’s a marvel that Hezekiah survived. Confronted by the Assyrian king, Hezekiah was so smart. Hezekiah was very entrepreneurial. He seized the moment. And he survived!

While it is true that Hezekiah was an entrepreneurial king, and was likely intelligent, if that is all he had going for him, his fate and that of Jerusalem would been the same as the other 46 Judean cities that Sennacherib conquered: destruction, death and slavery. His city of Lachish, the second-largest in Judah, was handily conquered by Sennacherib. The Assyrian king was so proud of it that after he left Judah, he had scenes of that siege carved in stone in his palace at his capital city of Nineveh. But of Jerusalem, he could brag only that he shut up Hezekiah like a caged bird—not that he had conquered him. Why?

In one of the most amazing turnarounds in history, Hezekiah and Jerusalem were saved, and the mighty Assyrian king was put to flight.

What is the real reason?

As attested to by the history of every righteous king in the kingdom of Judah before and after Hezekiah, the main factor in his success was his relationship with God’s prophet. If Hezekiah went to the Prophet Isaiah for counsel and did what he said, the kingdom thrived. If he didn’t, the kingdom suffered.

The Bible records that Hezekiah did try to bribe King Sennacherib—by stripping the gold from the doors to God’s temple. But that didn’t work: Sennacherib took the payment and attacked anyway.

Hezekiah’s payment, his intelligence, his entrepreneurial spirit didn’t save him from Assyria.

But you won’t read anything about that in Haaretz. You have a token mention of Isaiah in its article, but that’s about it.

What a lost opportunity for the power of God to be declared to the cities of Judah!

Here is what really happened.

The Bible records the details in 2 Kings 19. Sennacherib had just conquered over 40 fortified cities and many more towns. His troops had surrounded and besieged Jerusalem. The Assyrian commander had mocked the city’s defenders and their God, and had given them exactly one option: Open the gates in surrender and hope I keep my word to merely enslave and deport you, rather than massacre you. Hezekiah had prayed to God and counseled with Isaiah the prophet. The only hope they had was Isaiah’s promise from God to save them. Then, in one night, God supernaturally killed 185,000 Assyrian soldiers, and the remaining Assyrians withdrew, for good.

As I read through this piece from Haaretz, it confirmed something that a lot of us who worked on our archaeological exhibit already knew: that only we can faithfully retell the story of how God miraculously delivered Hezekiah and Jerusalem.

I mean no disrespect to others, but you can prove that statement by visiting our exhibit in Oklahoma. That is where the seal of Hezekiah, son of Ahaz, King of Judah, and the seal of Isaiah the prophet are located.

A paragraph from the introduction to our exhibit brochure, written by Trumpet editor in chief Gerald Flurry, highlights how different our approach is:

“In this exhibit, we have tried to bring to life some of the most dramatic and inspiring ancient history you will ever read. This is the story of Assyria’s conquests; it is a story of repentance, redemption and national salvation. It is the story of how God, through a remarkable king-prophet alliance, saved a city and its people from terrorism, war and conquest. It is the ultimate story of hope.”

In a world where authors, historians and even biblical archaeologists won’t even consider mentioning God, our exhibit highlights His miraculous ability to act in human affairs.

He did so in Hezekiah’s day, so why not today also?

Isn’t there a need for that ultimate story of hope, especially in the modern nations that have descended from ancient Israel and Judah, including the United States, Britain and Israel?

If you haven’t yet, I recommend that you visit our exhibit in Edmond, Oklahoma. If you are unable to make it, then check out our online exhibit page and, even better, request your free copy of the exhibit brochure.

This 38-page, full-color brochure has all the information from our exhibit. It can be a helpful resource for you, not just as an intellectual, scientific study of archaeology and the Bible, but also as a powerful source of hope in the dangerous times in which we live.