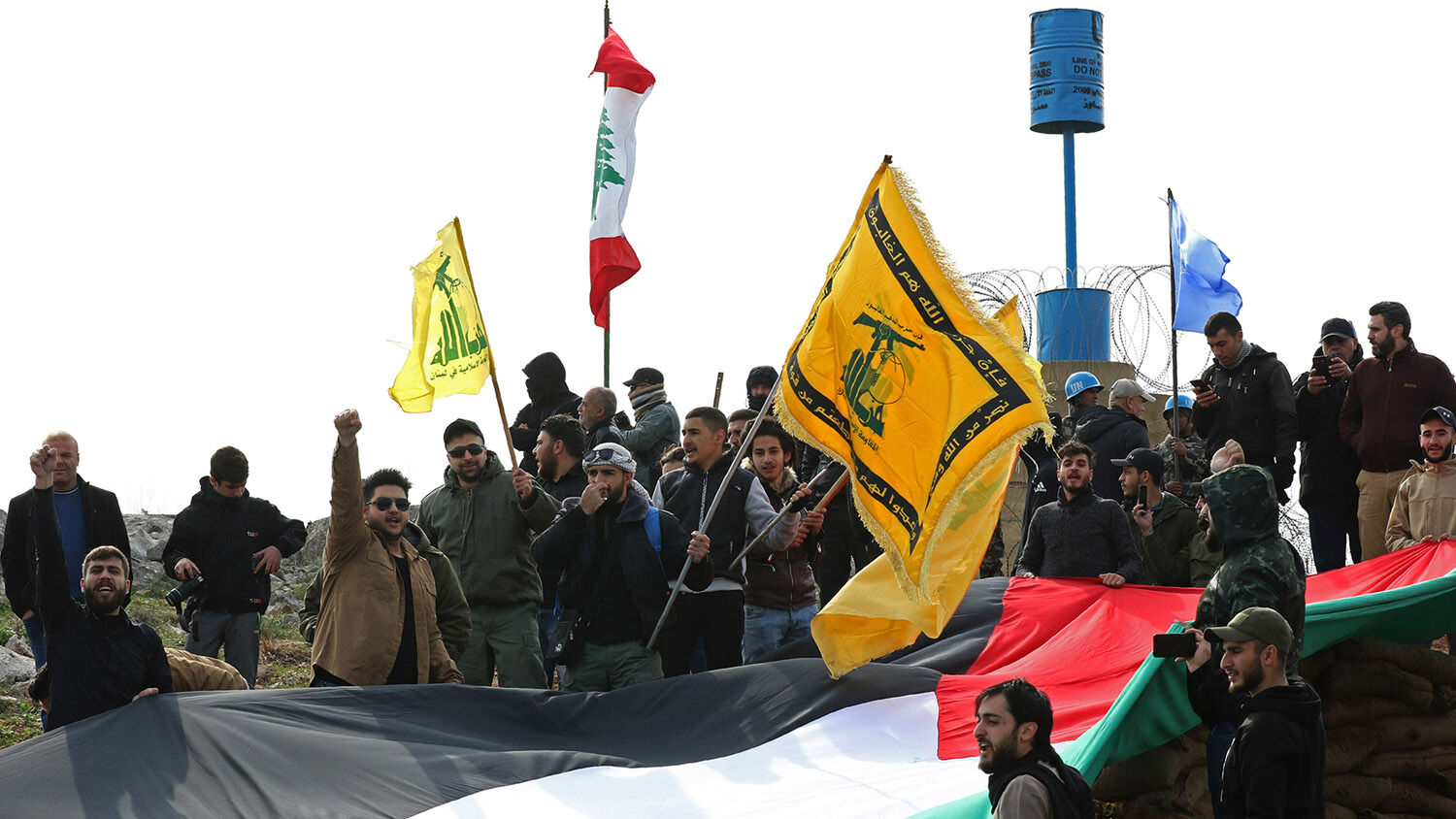 Hezbollah supporters wave Palestinian and Hezbollah flags during a demonstration on December 16 in the southern Lebanese village of Meiss al-Jabal on the border with Israel.
MAHMOUD ZAYYAT/AFP/Getty Images

As Iran garners more power in Lebanon, it is also becoming more accountable to the Lebanese.

jerusalem
November 22 should have been a day of celebration in Lebanon. That date marked the 75th anniversary of Lebanon’s independence from France. But no one was celebrating an independent and sovereign state.

This year, it is more apparent than ever that Lebanon is no longer independent. It is dependent on Iran.

Iran has achieved this control through funding and controlling Hezbollah, a Shiite group that dominates southern Lebanon.

While we in the West understand Hezbollah is a terrorist group, in Lebanon, Hezbollah is an official political party that won the most seats in the Lebanese Parliament in an election earlier this year.

Lebanon is the most religiously diverse nation in the Middle East. Lebanese Shiites, whose main political representation is Hezbollah, account for only a quarter of the population. But not all of them support Hezbollah, politically or otherwise.

Most observers write off Lebanon as being nothing more than an Iranian vassal. But there are actually many indications that Lebanon is about ready to throw off Iran’s powerful hold.

Even though elections were held eight months ago, Lebanon is still without a functioning government. Ordinarily, this wouldn’t be a huge issue.

However, Lebanon is facing extreme financial pressure. According to Lebanon’s president, unemployment is just under 50 percent. Public debt sits at 150 percent of gross domestic product, making Lebanon one of the most indebted nations on Earth. Add to this the fact that one quarter of those living in Lebanon are actually refugees from Syria, and you have a desperate need for cash.

The formation of a government is critical in order for Lebanon to legislate financial reforms. And financial reforms are required by the International Monetary Fund before it will grant Lebanon any loans.

This past weekend, thousands took to the streets to protest the broken political system that offers no solutions.

And there is a growing understanding in Lebanon that the reason for the government gridlock is Hezbollah.

By virtue of its diverse ethnic makeup, the Lebanese Constitution calls for a division of seats and positions of power among the nation’s Sunnis, Shiites, Christians and Druze. This is largely what has given Hezbollah the ability to control the political process, even though it doesn’t hold a majority itself. The government is inherently fragmented; Hezbollah just has to make itself the largest fragment.

Hezbollah received around 70 percent of Shiite voters’ support. This enabled it to negotiate a majority coalition with Christian and Sunni parties.

But eight months after the election, Lebanon still lacks a functioning government. Hezbollah is demanding that key government positions be granted to its preferred legislators. Others have resisted, so Hezbollah is refusing to allow the Sunni prime minister, Saad Hariri, to form a government.

As Caroline Glick pointed out this week, Hezbollah is trying to control the Health Ministry, including its $338 million budget. The group could then funnel this money toward free social programs, health care and other benefits as rewards to the families of Hezbollah fighters killed or wounded in Syria. This aid is essential for Hezbollah to maintain support among its base.

Loss of U.S. aid to Lebanon would be disastrous not only for the Lebanese Armed Forces but also for the entire nation.

So the deadlock remains. And the Lebanese are becoming more bitter toward Hezbollah’s leadership.

Hezbollah Pushing Too Hard at Israel

In addition to the economic struggles caused by Hezbollah, the Lebanese are increasingly aware that Hezbollah’s Iranian-directed military endeavors are putting their whole country in the line of fire.

Hezbollah’s paramilitary is estimated at about 45,000 men, and it is loaded with a missile arsenal that rivals that of some European nations. The group has long justified the existence of its fighting force by claiming that it is needed to protect Lebanon from an Israeli attack in the south.

However, when Iran deployed Hezbollah to prop up the Assad regime in the Syrian civil war, the Lebanese people saw proof that Hezbollah did not exist solely to defend their southern border. They saw it for what it is—a proxy force whose loyalties lie with Iran rather than Lebanon.

Anger against Hezbollah has increased with this month’s revelation that it has built tunnels to be used in an offensive mission against Israel. While most Lebanese accept Hezbollah as a necessity to defend against Israeli attack, they do not accept Hezbollah’s provocation of Israel. If or when Hezbollah provokes Israel into a military response, the lives of many Lebanese would be threatened.

Earlier this week, the Middle East Media Research Institute translated and published a series of powerful comments made recently by Lebanese lawmakers and media personalities expressing outrage against Hezbollah. Most of these comments come from either Sunni or Christian leaders, which together represent 70 percent of the nation. Reading through a sample of them (below) will give you an indication of the brooding disquiet felt by many Lebanese.

“Lebanon, which Hizbullah has hijacked by force of arms, is unable to escape the circle of danger. … The only solution is for Hezbollah to [either] return to the Lebanese fold or else leave Lebanon. … The world must have sympathy for Lebanon and realize it has been hijacked, and that great efforts must be made to free it from its captors.” —Mustafa ‘Aloush, a member of the Al-Mustaqbal Party’s political bureau

“Hezbollah wants to control what is still left of Lebanon’s decision-making, for Iran’s sake. … We say to Nasrallah for the thousandth time: We bow only to God and belong only to Lebanon. Do not delude yourself that by raising your voice you can intimidate the free people [of Lebanon]. Your weapons do not frighten us; we will oppose your plan as long as we live. Lebanon has been hijacked. It is imprisoned by Iran, and it is our responsibility to liberate it. We must oppose the Persian hegemony plan.” —Former minister Ashraf Rifi

“Just as the Kataeb overthrew the French patronage in 1943 and [later] the Palestinian and Syrian patronage, today they are staging a revolution against the existing situation and the endless postponing of the [task of] building the Lebanese state. … Our advice to Hezbollah is to stop [its attempts to] take over the country, because nobody can do that. Hezbollah may be able to overpower the politicians, but not the entire Lebanese people. … Hezbollah may be able to thwart [certain measures] for a while, but not indefinitely. We call on Hezbollah to take a courageous decision and reach out to all the Lebanese people in order to build a sovereign, free, independent and stable [Lebanese] state. [We call on it] to subject itself to the authority of the Constitution and laws. If Hezbollah continues to consider itself above the other Lebanese, permitted to do what others are not, it will eventually drive the public to launch an intifada against the existing situation.” —Sami al-Gemayel, chair of the Kataeb Party (the Phalange)

“If Hezbollah continues to consider itself above the other Lebanese, permitted to do what others are not, it will eventually drive the public to launch an intifada against the existing situation.” Those are extremely strong words.

The more power that Hezbollah garners in Lebanon, the more accountable it becomes for Lebanon’s difficulties.

The Lebanese are not dumb. They recognize that their nation has been hijacked by a despotic power in Iran that obviously cares less for the Lebanese than its own people—which is not much to speak of.

If history is our guide, when a nation-state is controlled by an unresponsive, unsympathetic power a thousand miles away, revolt is only a matter of time.

A yet-to-be fulfilled prophecy in Psalm 83 details an end-time alliance of nations that includes biblical Gebal, or Lebanon, and the “inhabitants of Tyre,” referring to southern Lebanon. Other nations in this alliance are Turkey, Syria, Jordan and Saudi Arabia.

As we have written in our Trend article on the subject, this alliance of moderate Middle Eastern nations are largely an anti-Iranian alliance, which is further indication that Lebanon will flip from a proxy of Iran to an adversary. This could not happen if Hezbollah maintains its power in Lebanon.

We understand how bold it is to claim that Lebanon will fall out of Iran’s grasp, even as we report often on how powerful Hezbollah is. Nevertheless, the Bible is clear about Lebanon’s future, and Iran will have no part in it. The internal struggles that Lebanon is facing right now show how close we are to this coming change.

It’s important to continue to watch Lebanon as calls for Hezbollah to quit its allegiance to Iran or leave the country grow louder. Given how critical Hezbollah has been for Iran’s plan to threaten Israel, it is only logical that Hezbollah will not retreat without being forced out.

To understand more of where these events in Lebanon fit into Bible prophecy, please read Trumpet editor in chief Gerald Flurry’s article “Why You Need to Watch Lebanon.”