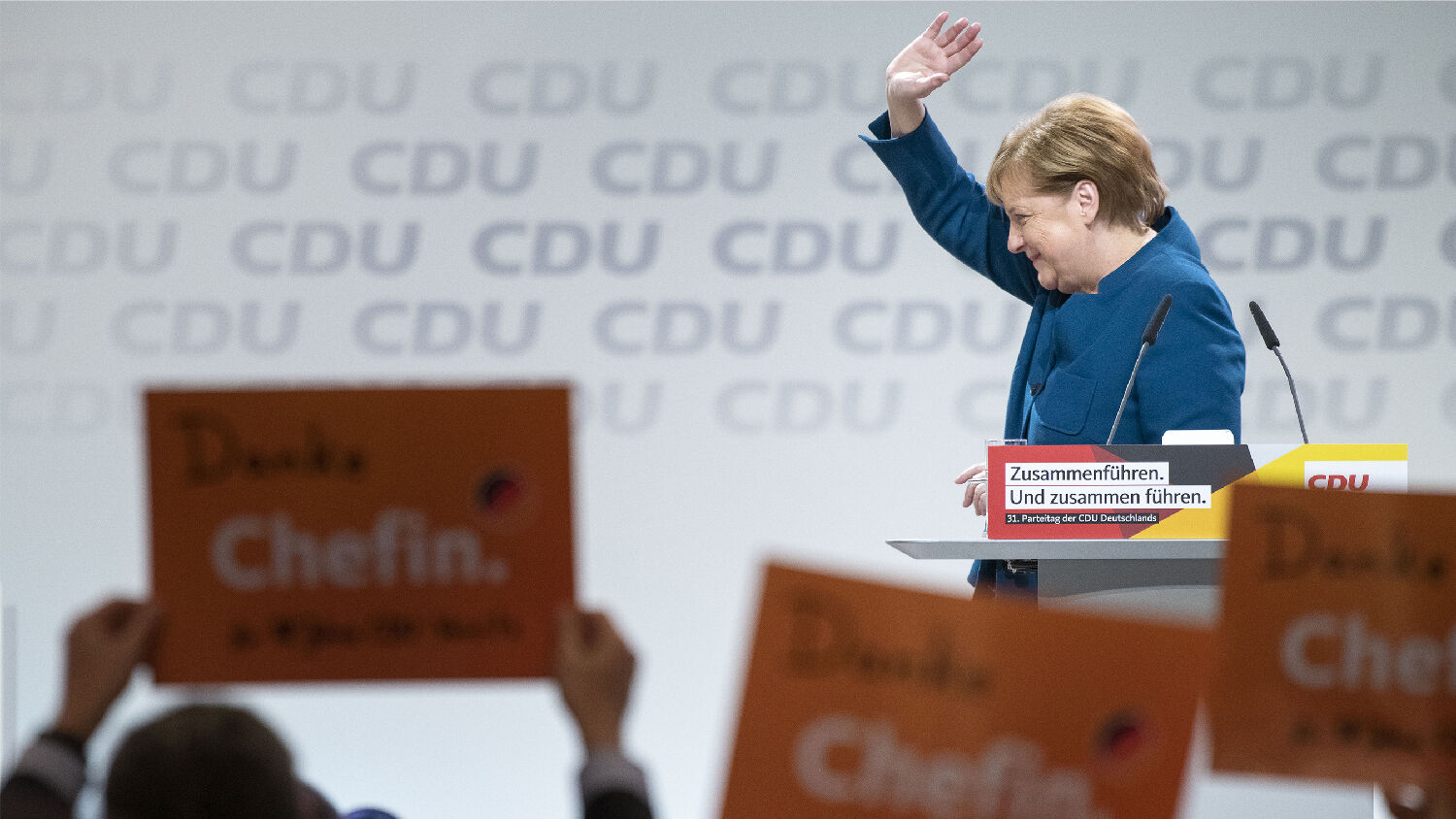 German Chancellor Angela Merkel waves after her final speech as cdu leader at the federal executive board meeting on December 7 in Hamburg, Germany.
Getty Images

Angela Merkel’s era is coming to an end. But the new party leadership has left Germany’s Christian Democrats terribly divided.

Today was a historic day for Germany and the world. December 7 marked the end of an 18-year era. In 2000, Angela Merkel took over the leadership of the Christian Democratic Union in Germany. In 2005, she led the cdu to victory and became Germany’s first female chancellor. And today, she has resigned as cdu chairwoman.

While the decision about who will replace her as cdu party head has already been made, the upcoming race for the chancellorship is still ongoing. The Bible prophesies of a drastic leadership change in Germany.

What happened today in Germany was most unusual. In the history of the cdu, there had been only one other time when a second candidate contested the party leadership. In every other case, the position had been uncontested. This time, three politicians were vying for the position.

Merkel’s control of her party was undisputed for almost two decades. But this year, a revolt arose. More and more members voiced their criticisms, and Merkel started to lose significant political battles.

The tipping point was reached after the cdu suffered a historic election loss in the German state of Hessen. cdu rebels had said that such a loss would be the sign to force her out of power. But Chancellor Merkel preempted the rebellion by announcing that she would not run for party leadership in December, nor would she seek reelection after her current term as chancellor ends in 2021. The ball was put back in the court of the rebels, who now had to present their alternatives.

After today’s election, it is clear that the party is divided into two camps. One group is in favor of a continuation of Merkel’s policies, as upheld by Annegret Kramp-Karrenbauer; the opposing camp, however, is represented by Friedrich Merz and Jens Spahn.

Merz resigned from politics—largely due to his disagreements with Merkel—in 2009. But with encouragement from cdu member and former Finance Minister Wolfgang Schäuble, he dared a political comeback.

Schäuble is seen by many conservatives as the father figure of the cdu. His words and recommendations are highly respected in the party. In the week leading up to the party congress, Schäuble publicly voiced his support for Merz. His recommendation was seen by many as an attempt to end the Merkel era early.

Jens Spahn, the current health minister, entered the race as an outsider. He is widely seen as Merkel’s strongest and most vocal critic in the cdu. His rise was also enabled by Schäuble.

But as the much-anticipated day arrived, everyone knew that the race was between Kramp-Karrenbauer and Merz.

After Merkel gave her final speech as party leader, the candidates presented their last speeches before the voting began.

All of Germany greatly anticipated the result. The next party leader needed a clear majority from the 1,001 delegates who would be voting at the party congress.

Since none of the candidates received a clear majority, the delegates voted again. This time, the voting was between Kramp-Karrenbauer and Merz, with Spahn’s votes up for grabs between the two. The anticipation in the room couldn’t have been more intense.

In the decisive round of voting, 52 percent of cdu delegates elected Annegret Kramp-Karrenbauer to take over the leadership from Merkel. The hope for change in the eyes of the other 48 percent of the delegates languished.

For 56-year-old Annegret Kramp-Karrenbauer, a new life is beginning. But as the sun set in Germany today, everything was different.

Tomorrow, the people of Germany will wake up in a different country. At first glance, much will seem the same. Kramp-Karrenbauer is not much different from Merkel. The hopes for a radical leadership change have grown dim. Schäuble’s attempt to bring in a different leadership through conventional means has failed. But most of all, today marked the end of an era in Germany.

Kramp-Karrenbauer is not the leader that Germany’s conservatives hope for. Neither is she the leader that the rising radical right in Germany demands, nor the one that the radical left demands. Does this mean that all these demands will remain unheard and that the world will just continue as it is?

No. Bible prophecy foretells that Germany will get drastically different leadership. Daniel 8 prophesies that a man of “fierce countenance” will rise in Germany, a leader who understands “dark sentences.” This man is prophesied to radically transform Germany.

The stage is now set for this man to return. The longer the German people have to wait for his appearance, the more likely his ascension to the top of German government becomes.

Editor in chief Gerald Flurry commented in the latest issue of the Trumpet magazine:

The Bible prophesies that this strongman will not be elected through a party congress, nor through the vote of the people, but rather through “flatteries.” Mr. Flurry continued:

The plea of many Germans for a strongman will eventually be heard. In his article “The Holy Roman Empire Goes Public—Big Time!” Mr. Flurry stated:

Daniel 11 describes the European strongman as being eloquent and coming to power by flatteries. Merkel’s coalition in Germany is very weak; it is on the verge of failing. I believe when Merkel leaves office, you will see the strongman of the Holy Roman Empire get control.

Bible prophecy is clear that we are about to see a dramatic change in the leadership of Germany. Merkel’s resignation as the cdu party leader marks a clear turning point in German history that will end with drastically new leadership. Read Mr. Flurry’s article “Germany—A New King Is Imminent” and request a free copy of his booklet A Strong German Leader Is Imminent to learn more about what is ahead for Germany.