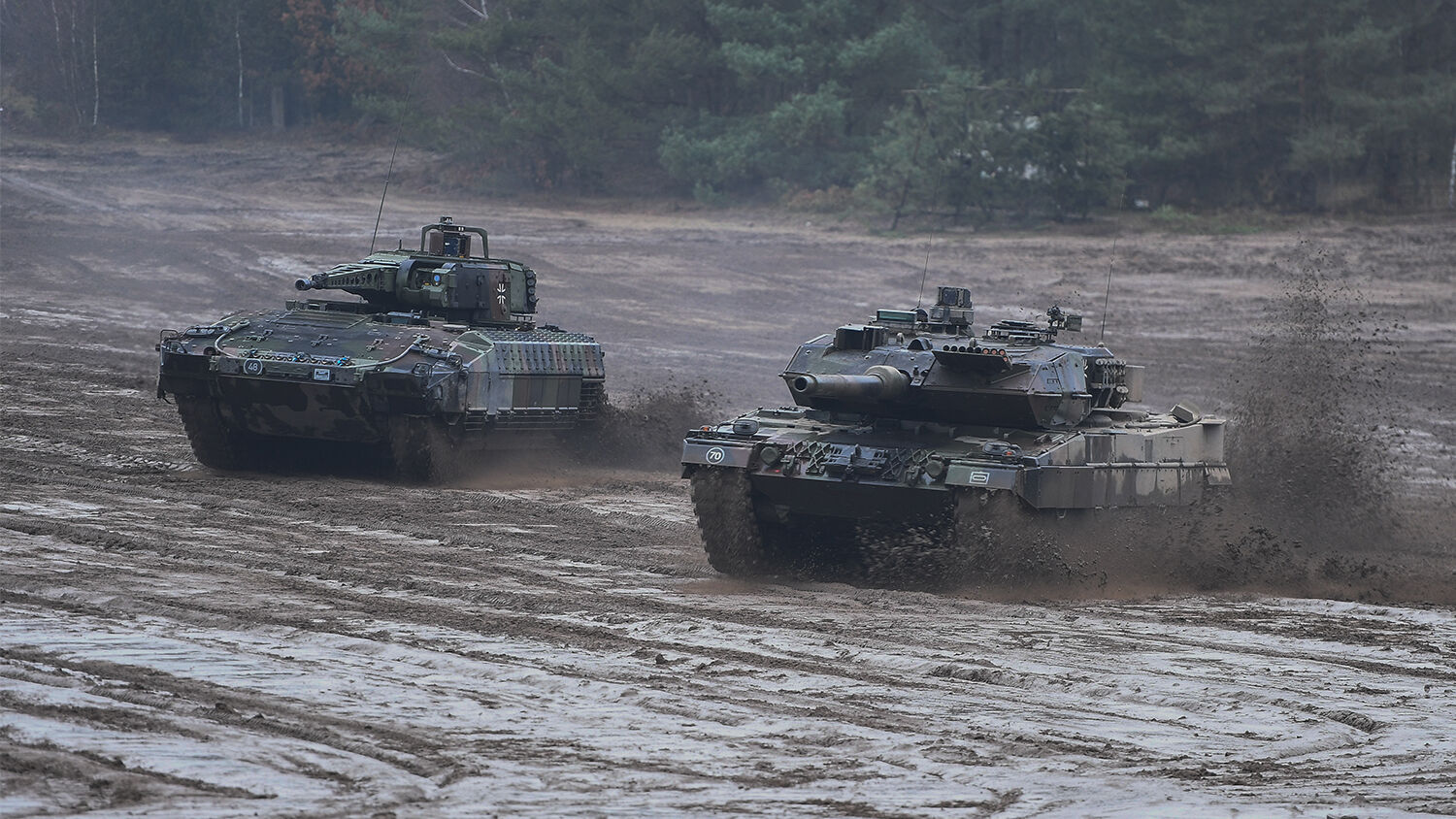 A Leopard 2 and Puma tank of the German Bundeswehr train at the infantry training facility on December 6 in Munster, Germany.
Getty Images

For the first time since Word War ii, polls show a plurality of Germans supporting a stronger military.

Since World War ii, when German aggression led to the deaths of tens of millions, German leaders have tried to increase the size and strength of the military, but they have often been held back by a lack of public enthusiasm.

“The survey suggests that the public is beginning to swing behind [German Chancellor ] Angela Merkel’s government, which has announced plans to raise military spending to 1.5 percent of gdp by the middle of the next decade and ultimately to the nato threshold of 2 percent,” wrote the Times of London. “Historically there has been only muted enthusiasm for such a move.”

Due to guilt over the atrocities of World War ii and the Holocaust, most Germans have rejected militarism and embraced pacifism. To this day, many Germans are skeptical of a military buildup. But that is changing. There are now more Germans who support a stronger military than there are those who oppose it.

One reason that a plurality of Germans see the need for a more capable military is that fewer and fewer believe they can rely on the United States for protection. According to the same survey, 43 percent of Germans believed that America was their number one foreign partner in 2017. This year, that figure dropped to 35 percent.

Chancellor Merkel has voiced support for increased military spending, suggesting that Germany’s defense budget could increase to 2 percent of the country’s gross domestic product by 2025. That, however, would be a long, slow process. With Merkel already on the way out, however, chances are the process could be quickened.

This change of heart was predicted decades ago—since the end of the World War ii, in fact! As far back as 1956, when Germany was still recovering from the devastation of the war, Herbert W. Armstrong wrote that Europe was “thinking more and more about the coming United States of Europe! … [Europe is] going to unite against us! And now Europe is about ready for it! The stage is all set! All that’s lacking now is the strong leader—the coming FÜHRER! The Germans are coming back from the destruction of World War ii in breathtaking manner. Germany is the economic and military heart of Europe. Probably Germany will lead and dominate the coming United States of Europe.”

Now we are seeing not only Germany’s leaders but also many of its people wanting Germany to once again rearm itself. This is a major step toward the “United States of Europe,” as Mr. Armstrong referred to it, becoming a unified superpower!

What Germany—and all of Europe—now needs is a strong leader!

With popular opinion hostile toward the U.S. and supportive of a stronger, more militant Germany, we can expect to see that strong leader arise soon.

In his recent article titled “Germany—A New King Is Imminent,” Trumpet editor in chief Gerald Flurry wrote, “There is a strong demand for a new leader in Germany. People can’t agree on what his policies should be—but they want someone different from Merkel, and someone with vision. …

Daniel 8 and 11 prophesy of a strongman who will lead the king of the north. (Read our free booklets Germany and the Holy Roman Empire and The Holy Roman Empire in Prophecy for proof that the biblical “king of the north” is the German-led European superpower.) Germany and Europe will soon have “a king of fierce countenance, and understanding dark sentences” (Daniel 8:23), who will come to power “peaceably, and obtain the kingdom by flatteries” (Daniel 11:21). This “king” will not come to power through Europe’s established current democratic electoral process, but by “flatteries.” Mr. Flurry wrote, “In other words, a deceived public, or a group of European leaders, likely invites this man into power.”

Everything we see going on in the world is pushing Europe toward its prophesied strongman and its united military!

Recently, Mr. Flurry has focused on the bold comments French President Emmanuel Macron made about the need for Europe to defend itself “with respect to China, Russia and even the United States” (emphasis added). The French finance minister openly called for a European “empire.”

“Macron’s recent remarks,” Mr. Flurry wrote in “France Is Betraying America and Fulfilling Bible Prophecy!”, “echo what high European officials are already thinking and discussing. They want a Holy Roman Empire army that can stand up to any enemy. The empire is already there. They are just waiting for the prophesied strongman to lead it (Daniel 8:23).”

Mr. Flurry’s recent Key of David television programs have consisted of a three-part series on France’s prophesied betrayal of America. You can watch those episodes here:

A united European army is getting closer and closer, and the French will be a part of it. But they will not lead it. In the third part of this Key of David series, Mr. Flurry highlighted President Macron’s statement: “We will not protect Europeans unless we decide to have a true European army.” He pointed to the fact that the EU’s military budget is around three times larger than Russia’s and about half of that of the United States. With popular support behind it, expect that budget to grow even larger.

The stage is set. The European empire is already in place. As Mr. Flurry has said multiple times, all that is needed is for the empire to be consolidated and wielded by a German strongman!

At his November 11 Personal Appearance Campaign in Columbus, Ohio, Mr. Flurry said, “There is this strongman that’s ready to come on the scene. They’re already pushing Angela Merkel out, and they could do it right away. And who is going to replace her? Every leader in Europe would like to do it, but there’s only one … and we believe we know who he is.”

The Trumpet has, for years, identified Karl-Theodor zu Guttenberg as the most likely possibility to fulfill this role as Germany and Europe’s strongman and leader of the Holy Roman Empire! (Read A Strong German Leader Is Imminent, by Gerald Flurry, to learn why.)

God is going to correct America, Britain and Israel for their sins, and He will use the Holy Roman Empire, led by Germany, to do it! The German public is increasingly in support of a more militarized Germany, and they are seeing America in a less and less favorable light.

Despite this bleak, short-term future for the end-time nations of Israel, it is all leading to the greatest event ever: the return of Jesus Christ to this Earth! There is a hope, both physical (an escape from the Great Tribulation and the terrible suffering that will precede Christ’s Second Coming) and spiritual (birth into the Kingdom of God), which you can have if you heed God’s warning message!

Individuals can still qualify to have this hope if they turn to God in repentance of their sins. If you believe Bible prophecy and see the events happening in the world—especially the shifting attitude in the German public and the imminent rise of the European strongman—do you have any other choice?

Watch Mr. Flurry’s Key of David programs and Personal Appearance Campaign message for a clear picture of how Europe is closer than ever to becoming the unified superpower referred to in the Bible as the king of the north.