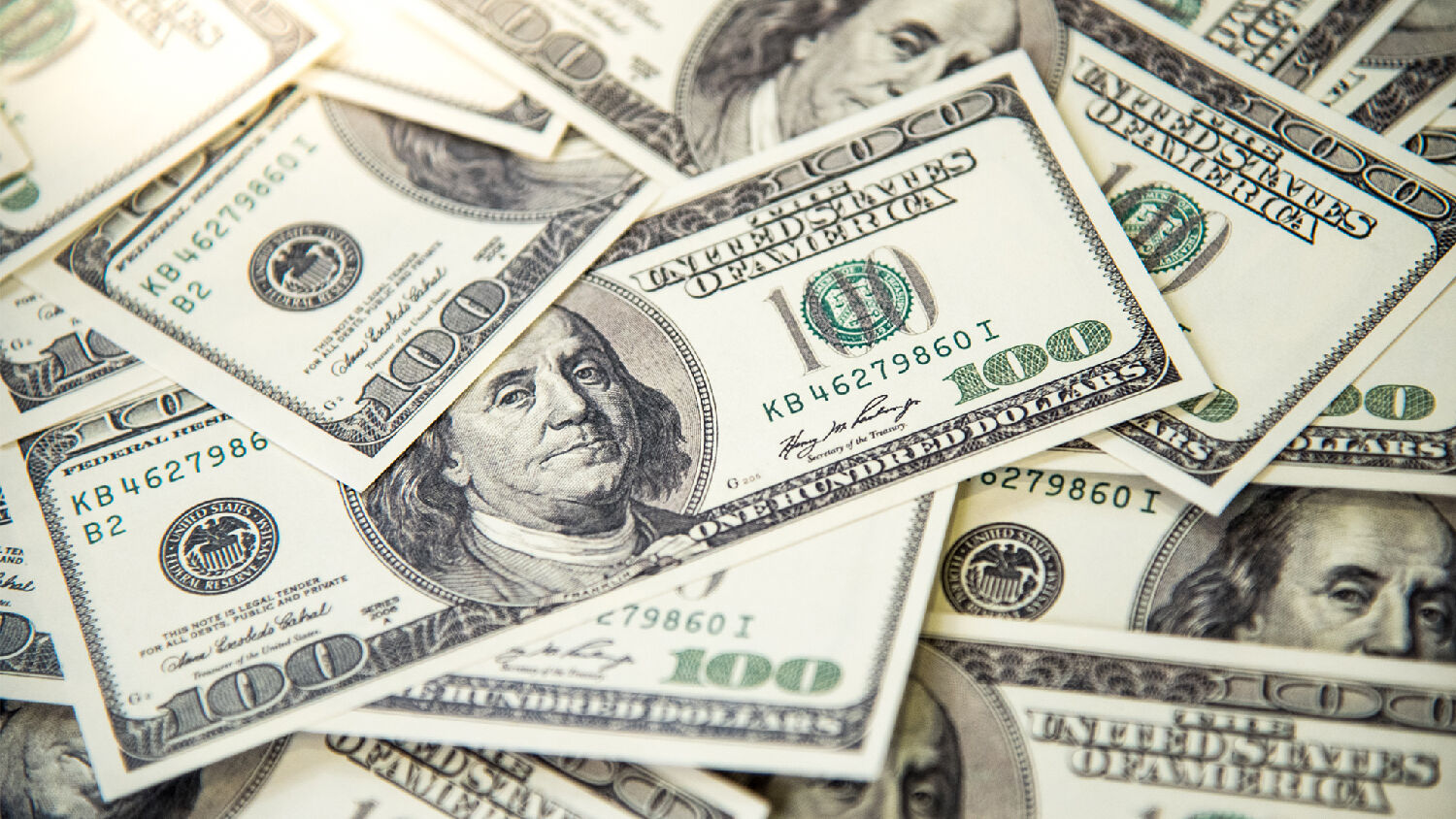 What are we buying with our elections? Here’s a biblical perspective.

America’s 2018 midterm elections are in our rearview mirror. But let’s take a moment to reflect on one aspect that got little press. It reveals something fundamental about our system of government worth thinking about:

As in so many other aspects of life, you learn a lot when you follow the money. And in these midterms, there was an enormous amount of money to follow: enough dollar bills to fill 5,000 forklift pallets—enough pallets to fill a container ship.

And all of them were spending lots and lots of money.

Every serious candidate had to rent offices, hold rallies, print signs, produce advertisements, purchase television time, buy online ads, and pay advisers, researchers and other campaign workers. All this money is spent whether they get elected or not. Even running a losing campaign is enormously expensive.

How much money are we talking about?

And you could do it every two years.

It’s actually quite stunning to think of how all this money in politics is used to sway voters, who decide who will rule—when you look at the declining wisdom and judgment within the voting public. As Winston Churchill said, “The best argument against democracy is a five-minute conversation with the average voter.”

Now, this money doesn’t come from the candidates’ personal bank accounts, except in fairly rare cases. This money comes from donors. And most of it comes from big donors. As much as politicians like to talk about all the small donations they receive, less than 10 percent of Americans have contributed to a political campaign, ever. And very few Americans give more than $200, which is the amount that has to be reported to the Federal Election Commission: That number has never exceeded more than 0.5 percent of Americans.

Most of the money comes from large individual donors, and from political action committees (pacs). And most of these committees are sponsored by corporations, trade associations and other business and professional groups.

Some individuals spend tens, or even hundreds, of thousands of dollars supporting their chosen political candidate or party.

And money is a primary determinant of whether a candidate will win.

A 2017 study found that early fundraising strongly predicted which candidates won their primary races. Most candidates who out-fundraise and out-spend their opponents also out-perform them on election day. There are exceptions to the rule: Some big spenders actually lose. It’s also true that incumbents usually win, 9 to 1. So money isn’t all-important, but it is extremely important. When you think about it, it is too important.

“There are literally hundreds of different special interest groups seeking to promote their agendas by way of the wallet—from Big Oil to Big Labor, pharmaceutical companies to cable tv operators, and a full spectrum of ideological groups from the Sierra Club to the National Rifle Association,” writes OpenSecrets.org. “The money they deliver to politicians, year after year, is what pays the biggest part of the bill for American elections.”

These spenders consider it a financial investment: If the candidates they donated to win, they expect, in some way or another, to receive benefits. These donors, to some degree, influence policy. And there are certainly cases where the amount of influence corresponds not to the merits of their policy preferences but to the amount of cash they hand over.

Money has a perverse effect on government.

There is a reason God gave His people Israel a law telling the leaders, “Thou shalt not wrest judgment; thou shalt not respect persons, neither take a gift: for a gift doth blind the eyes of the wise, and pervert the words of the righteous” (Deuteronomy 16:19).

All that money in American politics influences and perverts our politics in countless ways—from who wins elections to what they do once they are in office.

Did you know that the four richest counties in the United States are suburbs of Washington, D.C.? Think about that: Government and money are supposed to be two different things. But in America today, they have become absolutely inseparable.

And this effect is only getting worse. Since 1998, the cost of midterm elections has more than doubled. In just 20 years, we have gone from spending just under $2.5 billion to spending more than $5 billion! (Without inflation, this number is even higher: $1.6 billion to $5.1 billion.) And in those 20 years, America has spent a grand total of more than $38 billion on midterm elections. This does not include presidential elections!

Was that $38 billion well spent? Has it bought us senators and representatives with policies and character that have benefited this nation?

These are worthwhile questions to ask. But few really ask them honestly.

Yes, there is a growing general dissatisfaction with our political system, if we are to judge by Congress’s basement-level public approval ratings. And there are louder and louder calls for revising or doing away with various aspects of our system. People seem to want to move more toward direct democracy—getting rid of the electoral college, for example, or allowing everyone voting rights, including prisoners and illegal aliens—as if the wisdom of the multitude will increase by adding in such voices. There are revolutionary forces at work in America.

But one tangible outcome of our dissatisfaction is that we are pouring even more money into the political system we have. Even if it means electing people who are fighting against that system.

It is worth thinking about what lessons we can take from the direction America’s politics have taken. It’s good to step back and evaluate the big picture.

After all, right now there is a strong trend among many nations to move away from American-style democratic representation. More and more countries are moving away from this type of electioneering. Many are virtually dispensing with the trappings of democracy altogether.

Are there any nations that look at America and see a government model worth following? America has become a model of terrible division—of infighting and bickering—of one political party checking the other—of inertia and gridlock.

Whether or not we realize it, this system is not the way of the future. It is about to become a relic of the past. The world is rapidly moving in a different direction.

Looked at from an even wider view, all human history teaches lessons about different types of government—their pros and cons, strengths and weaknesses.

America’s founders looked at all that history—and they created a system that tried to carefully balance elements of democratic representation with elements of aristocracy and with one-man rule. They were very aware that democracy had the tendency to become the tyranny of the majority. Founder John Adams said, “Democracy has never been and never can be so durable as aristocracy or monarchy; but while it lasts, it is more bloody than either. … Remember, democracy never lasts long. It soon wastes, exhausts and murders itself. There never was a democracy yet that did not commit suicide.”

Few people step back and consider these truths.

We at the Trumpet consider them—because we aim to look at all world events and trends through the lens of the Bible. The laws of the Bible warn us about the dangers of money influencing politics, for example. The prophecies of the Bible tell us what America’s future will be, where the current political trends are leading this nation. And it is extremely alarming.

The Bible also gives a critical perspective on how much influence God has over the politics of nations. It plainly says that God sets up and removes leaders to serve His purposes:

There is a spiritual dimension to politics—even to elections, if we believe the Bible. This is a truth that very few consider: Even elections are subject to God’s authority!

But you can also see His hand in how election results sometimes defy logic and conventional wisdom—like the last presidential election—and you can see evidence of God’s hand in that. Trumpet editor in chief Gerald Flurry has pointed to a specific Bible prophecy showing that God is using the current president to save the nation temporarily.

One last point to consider: The Bible also reveals a model for a perfect government that will replace the failed governments of this world. There were some details about this government in the system God put in place in ancient Israel. Then, when Jesus Christ came to Earth, He brought an announcement of this coming government. His gospel message was actually advance news of the soon-coming Kingdom of God, which is a world-ruling government.

Herbert W. Armstrong wrote about this in his book Mystery of the Ages. This is a book you really need to read. We will gladly send you a free copy if you ask for one.

Drawing on the prophecies of the Bible, here is what he wrote about it—and think about these words from Mystery of the Ages, in comparison to the 2018 midterm elections:

There will be no election campaigns. No campaign fundraising dinners. No dirty political campaigns, where each candidate attempts to put himself forward in the most favorable light, defaming, denouncing, discrediting his opponents. No time will be wasted in mudslinging campaigns in the lust for power.

No human will be given any government office. All in government service will then be divine Spirit beings, in the Kingdom of God—the God Family.

All officials will be appointed—and by the divine Christ, who reads and knows men’s hearts, their inner character, and abilities or lack of ability.

What a refreshing contrast to the trends we see today. That is a government worth thinking about and setting your heart on!

Dig in to what your Bible says about this. Study it by reading Chapter 7 of Mystery of the Ages by Herbert W. Armstrong: “The Mystery of the Kingdom of God.”