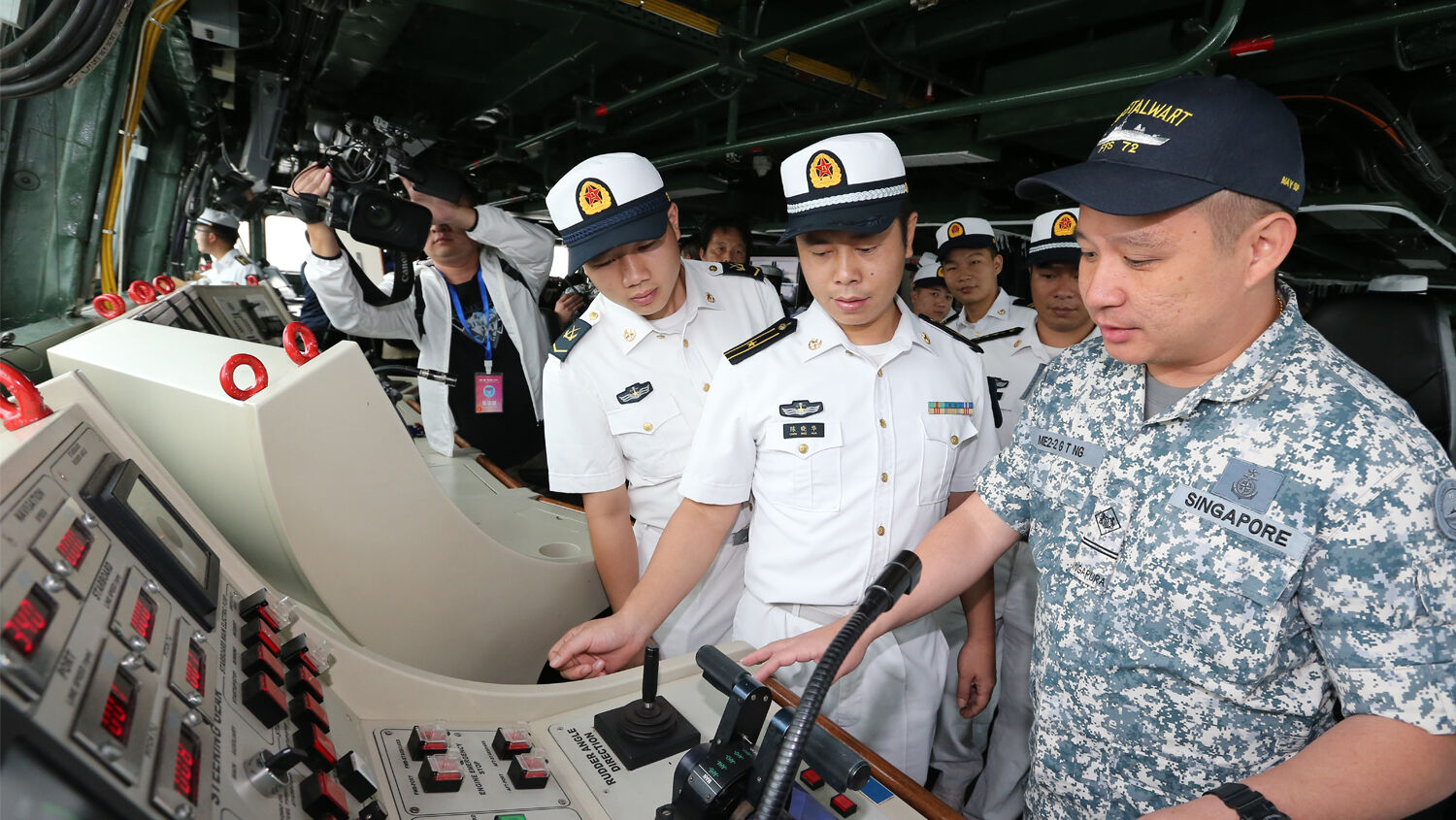 Chinese People’s Liberation Army Navy members and a Singaporean Navy member are seen on Singaporean frigate Stalwart during an open activity of the asean-China Maritime Exercise 2018 on October 24 in Guangdong province of China.
Getty Images

ASEAN was established to give smaller Asian nations a unified voice against China. Now, the group appears to be warming up to China.

China and the Association of Southeast Asian Nations (asean) took part in their first ever joint maritime drill in Zhanjiang, China, from October 22 to 27. The drills reveal a potential shift in asean’s geopolitical alignment.

asean was founded in 1967 by Indonesia, Malaysia, the Philippines, Singapore and Thailand; Vietnam, Laos, Brunei, Cambodia and Myanmar later joined. One of its purposes was to give its members a strong unified voice against coercive or expansionist activities in the region. Thanat Khoman, former Thai foreign minister and one of asean’s founding fathers, said:

The first [reason] was to prevent external powers from exploiting the power vacuum left after rapid decolonization of the region. Second, the founders of asean saw an opportunity to foster cooperation among countries with common interests in the same geographic region. Third, the founders were convinced that the countries of Southeast Asia would have a stronger voice in addressing major global powers if they could speak together.

In recent years, by building and militarizing islands in parts of the South China Sea that are claimed by other nations, China has been exhibiting exactly the kind of behavior that asean was designed to confront.

Four of the 10 asean nations have claims in the South China Sea that overlap those of China, which claims almost the entire sea as its own. But with the asean nations now engaging in military drills with China, questions arise as to whether the group is now realigning itself with China, perhaps out of intimidation.

This is exactly what Trumpet editor in chief Gerald Flurry forecast would happen. Regarding the South China Sea, he wrote in the July 2016 issue:

Since Japan’s defeat in World War ii, America has protected this vital trade route and brought peace to this part of the world. Now the American military is retreating, and other great powers are coming in to fill the vacuum. …

Mr. Flurry’s forecasts are founded on specific end-time Bible prophecies, and asean nations could play a role in these prophecies. Revelation 16:12 refers to an end-time bloc of Asian nations called “the kings of the east.” Prophecy shows that this union of Asian nations, primarily led by Russia and secondarily by China, will field a staggering army of 200 million men (Revelation 9:16). Troops from populous asean member states, such as Indonesia, the Philippines, Vietnam and Thailand, could be assimilated into this massive army. In his free booklet The Prophesied ‘Prince of Russia’, Mr. Flurry writes (emphasis added):

With other Asian nations joining in, you quickly reach combined populations of 3.5 to 4 billion people! Under extreme circumstances like those described in these end-time prophecies, it is not hard to imagine 1 in 10 or 20 people going to war.

asean was created in large part to strengthen these smaller Asian nations to stand together against China. It appears to be cooperating with China, which might lead directly to the fulfillment of Bible prophecy.

To understand more about China’s rise in the South China Sea and the assimilation of populous asean nations into a gigantic bloc known as “the kings of the east,” please read “China Is Steering the World Toward War,” by Gerald Flurry.