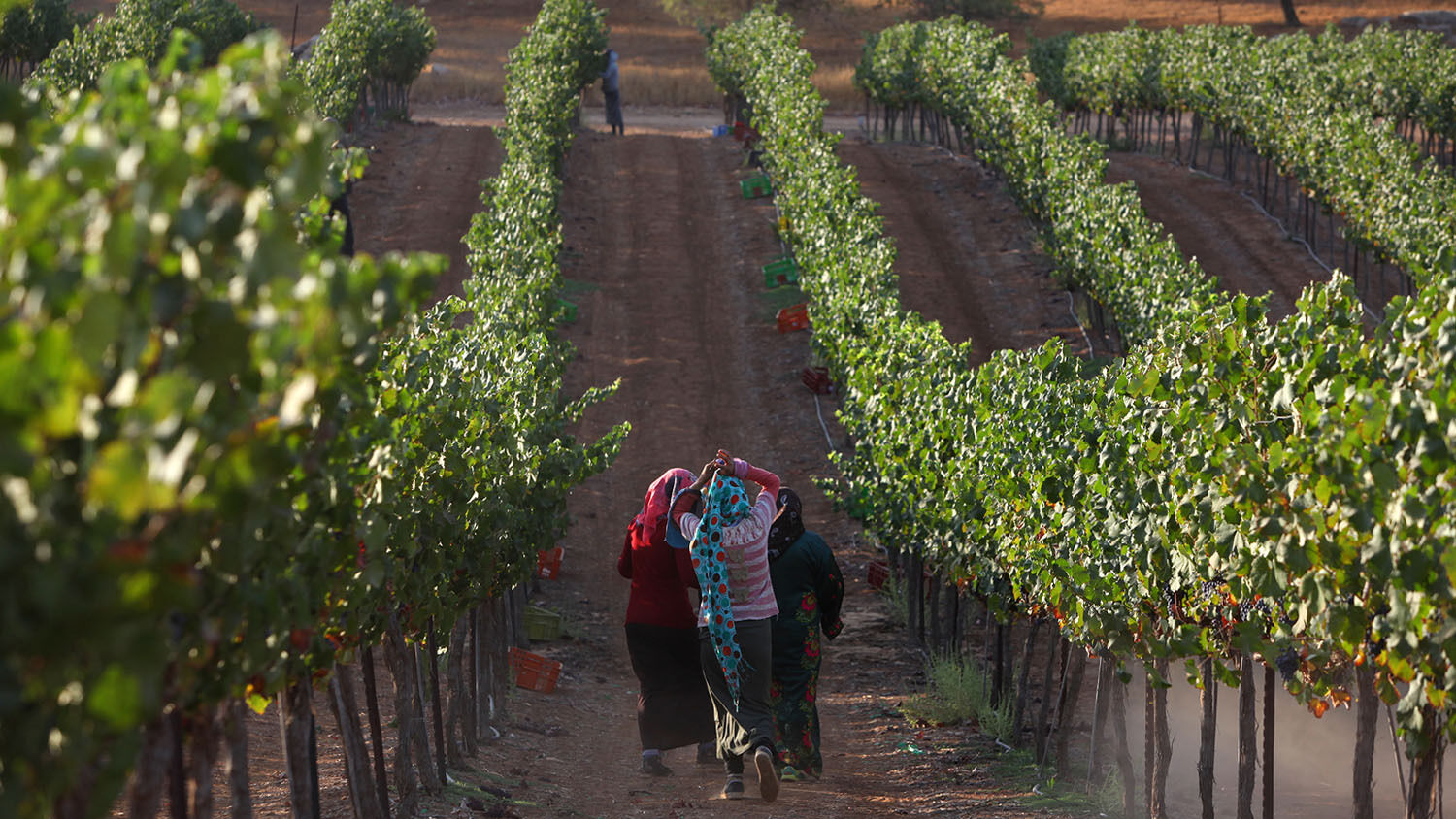 A dramatic change in the Israeli-Jordanian relationship is coming.

Relations between Israel and Jordan can and do change rapidly. Just 50 years ago the two nations were at war. Today, relations are not so violent, but they are far from friendly.

Many attribute this “calm” to the Israel-Jordan peace agreement signed on Oct. 26, 1994, which settled major issues like territory, security and water rights between the neighbors. For 24 years, this treaty has bound the two nations in a series of social, security and economic agreements.

But last week, Jordan surprised the world, announcing a change in the status quo of the treaty. King Abdullah ii announced that Jordan would not renew a land lease to Israeli farmers. In one year’s time, they will be forced to vacate over 1,000 acres of Jordanian farmland.

Under Annex i of the peace agreement, Jordan agreed to grant Israel private farming rights in the regions of Naharayim and Zofar. These fertile farmlands are in Jordanian territory, yet maintained by Israeli farmers. They are also policed by Israeli forces. The 25-year lease was set to automatically renew unless either party chose not to renew one year prior.

“Baqoura and Ghumar [Arabic names for the two regions] are Jordanian lands and will remain Jordanian, and we will exercise full sovereignty over our territory,” the king proclaimed.

Over the past few years, tensions between Jordan and Israel have been high. Economic problems are fanning the flames of Jordanians’ discontent. Jordan is facing water and energy shortages. On top of that, the influx of 1.5 million Syrian refugees means the nation is desperate for more farmland. In the lead-up to the deadline, hard-liners have been active, marching in the streets and calling on the king to end the lease.

Israeli Prime Minister Benjamin Netanyahu was all smiles as he met with King Abdullah ii in June. Even so, the warm handshakes do not represent the will of the people—nor many in the Jordanian leadership. It is hard to hide the fact that the relationship, like the peace treaty, is eroding.

Eighty-seven members of Jordan’s Parliament petitioned the government to cancel the lease. The peace treaty is opposed by Jordanians—more than half of whom are of Palestinian origin. Last year, an Israeli soldier killed two Jordanian nationals. In the aftermath, protesters took to the streets of Amman calling for an end to the treaty. Others attempted to storm the Israeli Embassy.

King Abdullah ii’s announcement is just the latest blow in a series of disagreements that have fractured the Israeli-Jordanian relationship. Is history about to repeat itself yet again? Will the two nations have another violent falling-out?

Relations between ancient Israel and the forefathers of Jordan, the Moabites, often swung from peace to war. One instance in 2 Kings 3 records how Mesha, king of Moab, gifted sheep and wool to Israel’s King Ahab. But when Ahab died, the Moabites rebelled. This led to a bloody slaughter of the Moabites. Israel destroyed their wells, ruined their farmland, and cut down their trees.

The Bible warns that a similar extreme change in the relationship will occur in modern times. Only this time, it will end on a far more positive note for those who take heed!

One soon-coming event God records in Scripture is a war between two powers known as the king of the north and the king of the south. You can prove from your Bible that these are German-led Europe and Iran-led radical Islam. Request your free copies of Germany and the Holy Roman Empire and The King of the South for more insight.

“And at the time of the end shall the king of the south push at him: and the king of the north shall come against him like a whirlwind, with chariots, and with horsemen, and with many ships; and he shall enter into the countries, and shall overflow and pass over. He shall enter also into the glorious land, and many countries shall be overthrown: but these shall escape out of his hand, even Edom, and Moab, and the chief of the children of Ammon” (Daniel 11:40-41).

Who are Edom, Moab and the children of Ammon that escape this war?

Anciently, Edom was located in the southern part of Jordan. The rocky fortress of Petra was at one time the Edomite capital. Moab was the central part. There is a small city in Jordan today called Moab. The children of Ammon were from the north. The capital of Jordan today is Amman (spelled almost the same as Ammon). The name of the capital city is only one indication of many that this is the area called Jordan today.

Study Daniel’s prophecy: The king of the north is going to be victorious in this battle. The radical Islamic camp will be conquered.

Shortly after that battle, Jerusalem will be taken captive by the king of the north. That means people all around Jordan will be conquered—but this prophecy says that Jordan will “escape out of his hand.”

But Israel does not escape. Psalm 83 shows that Jordan will align with Germany against Israel. This is explained in our article “A Mysterious Alliance.”

And how does Jordan respond to Israel’s captivity? They celebrate. Notice: “The word of the Lord came again unto me, saying, Son of man, set thy face against the Ammonites, and prophesy against them.” Why? “… Because thou saidst, Aha, against my sanctuary, when it was profaned; and against the land of Israel, when it was desolate; and against the house of Judah, when they went into captivity” (Ezekiel 25:1-3).

A Warning to Jordan

The people of Jordan will cheer when God’s warning to Israel becomes a reality. The peace treaty will be long forgotten. But through Ezekiel, God is warning Jordan too!

“Behold, therefore I will deliver thee to the men of the east for a possession, and they shall set their palaces in thee, and make their dwellings in thee: they shall eat thy fruit, and they shall drink thy milk” (Ezekiel 25:4). This is the outcome of the terrifying tidings out of the east mentioned in Daniel 11:44.

Jordan will not be laughing at Israel’s downfall anymore.

After Europe defeats the king of the south and the modern-day nations of Israel, it will have to face what the Bible calls the kings of the east. God warns that this Asiatic power will annihilate Jordan as it fights the Europeans.

Jordan will be caught in the crossfire of world powers battling for world domination.

The Prophet Jeremiah warned Jordan of this outcome too. “And the spoiler shall come upon every city, and no city shall escape: the valley also shall perish, and the plain shall be destroyed, as the Lord hath spoken” (Jeremiah 48:8).

To those new to the Trumpet and the subject of Bible prophecy, this may seem overwhelming. Yet God makes clear that great world powers will soon battle for world supremacy. And much of that fighting will occur in and around Israel, Jordan and the Middle East.

The kings of the north, south and east will go to war. Jordan will be in the center of it all. But there is hope here for Jordan. With the warning, God provides a way of escape.

Notice what Mr. Flurry writes in Jordan and God’s Church in Prophecy:

There is still good news physically and spiritually for Jordan. “O ye that dwell in Moab, leave the cities, and dwell in the rock, and be like the dove that maketh her nest in the sides of the hole’s mouth” (verse 28). The obedient people of Jordan are to leave the cities and dwell in “the rock”—Sela, or Petra. This is the only fortress or place of protection for them.

I believe this is a very encouraging verse. It shows that God will protect carnal-minded people if they have the faith to flee.

Today, God is warning both Israel and Jordan. If you want to read more about it, be sure to request a free copy of Mr. Flurry’s booklet Jordan and God’s Church in Prophecy.

There is still time for individuals to respond. Nowhere else will you see or hear a warning like this. God loves all men and doesn’t want to see any go through the terrible times ahead. He will provide a way of escape for any who will listen and have the faith to get up and go. We need to know Bible prophecy, because these events are at the door.