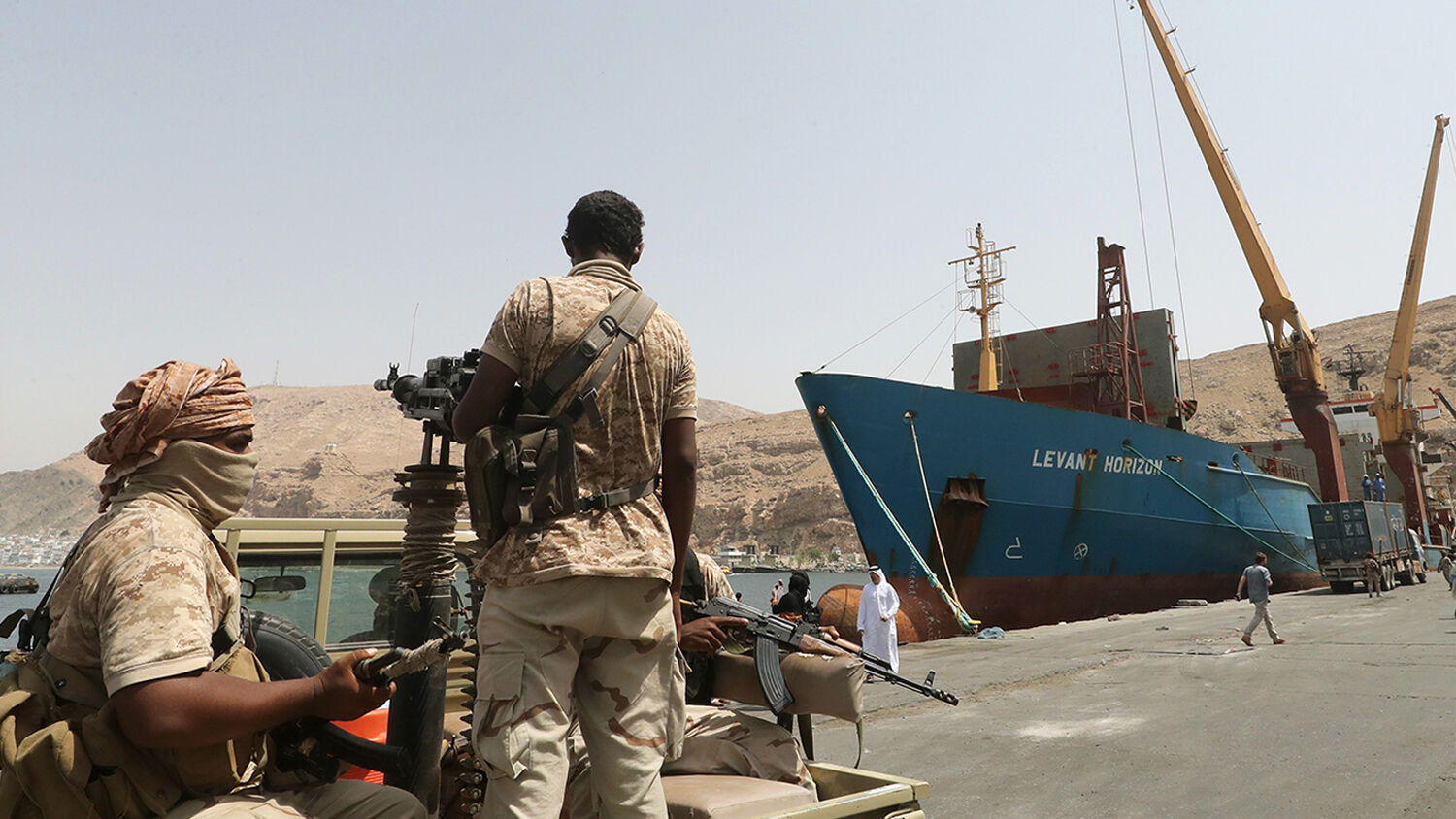 Yemeni soldiers loyal to the Saudi and U.A.E.-backed government stand in front of a ship moored at the dock in Mukalla on August 8.
KARIM SAHIB/AFP/Getty Images

The Houthi militia in Yemen can now threaten critical oil shipments sailing through the Red Sea. A video released recently by Houthi media clearly shows the fighters in possession of naval mines and threatening to place them in the Red Sea and the Bab el-Mandeb.

The video constitutes further evidence that Iran is arming the Houthi militia. This is another example of Iran’s strategy to influence and control nations bordering the Red Sea and the southern Mediterranean Sea.

Analysts agree that the Houthis most likely do not have the technical ability to build their own mines. The same is true for other advanced weapons they use, such as ballistic missiles. Iran is the main supplier of these weapons.

Najib Gallab, the head of the al-Jazeera Center for Studies, believes Iran is encouraging Houthis “to carry out terrorist acts through booby-trapped boats and missiles to target the international trade corridor in the Red Sea.” This is because “Iran wants to show its maritime terrorist capabilities through Houthis on the west coast.”

Increasing its influence and control over Yemen and neighboring nations surrounding this vital seaway would give Iran immense strategic leverage.

Iran’s actions affect Europe too. Oil shipments passing through the Bab el-Mandeb choke point are vital to the European economy.

According to data collected by the Energy Information Administration and published by Bloomberg, roughly 4.8 million barrels of oil and petroleum passed through the strait in 2016. More than half of that was bound north toward Europe.

If the Red Sea became impassable due to mines, tankers would have to reroute around the entire continent of Africa. The voyage from Fujairah, Saudi Arabia, to Rotterdam, the Netherlands, would increase in distance by 78 percent. Reaching Italy would take three times as long. This would be a major disruption in a vital supply chain.

The Trumpet has warned for years that Iran and Europe are on a collision course. Since 2011, we have drawn attention to Iran’s attempts to influence and control nations bordering the Red Sea and the Mediterranean.

In his article “Libya and Ethiopia Reveal Iran’s Military Strategy,” Trumpet editor in chief Gerald Flurry wrote about how and why Iran is pursuing control over the nations bordering the Red Sea and the Mediterranean, and how those ambitions will lead to a military clash with Europe.

If Iran gets control of that trade route, it could create enormous damage and chaos in America and Europe almost overnight. Germany and the Vatican, the heart of the Holy Roman Empire, are not going to allow the king of the south to get control of … the world’s number one trade route!

You can understand Iran’s ambitions and where its strategy in the Red Sea is leading. Request your free copy of The King of the South, by Gerald Flurry.