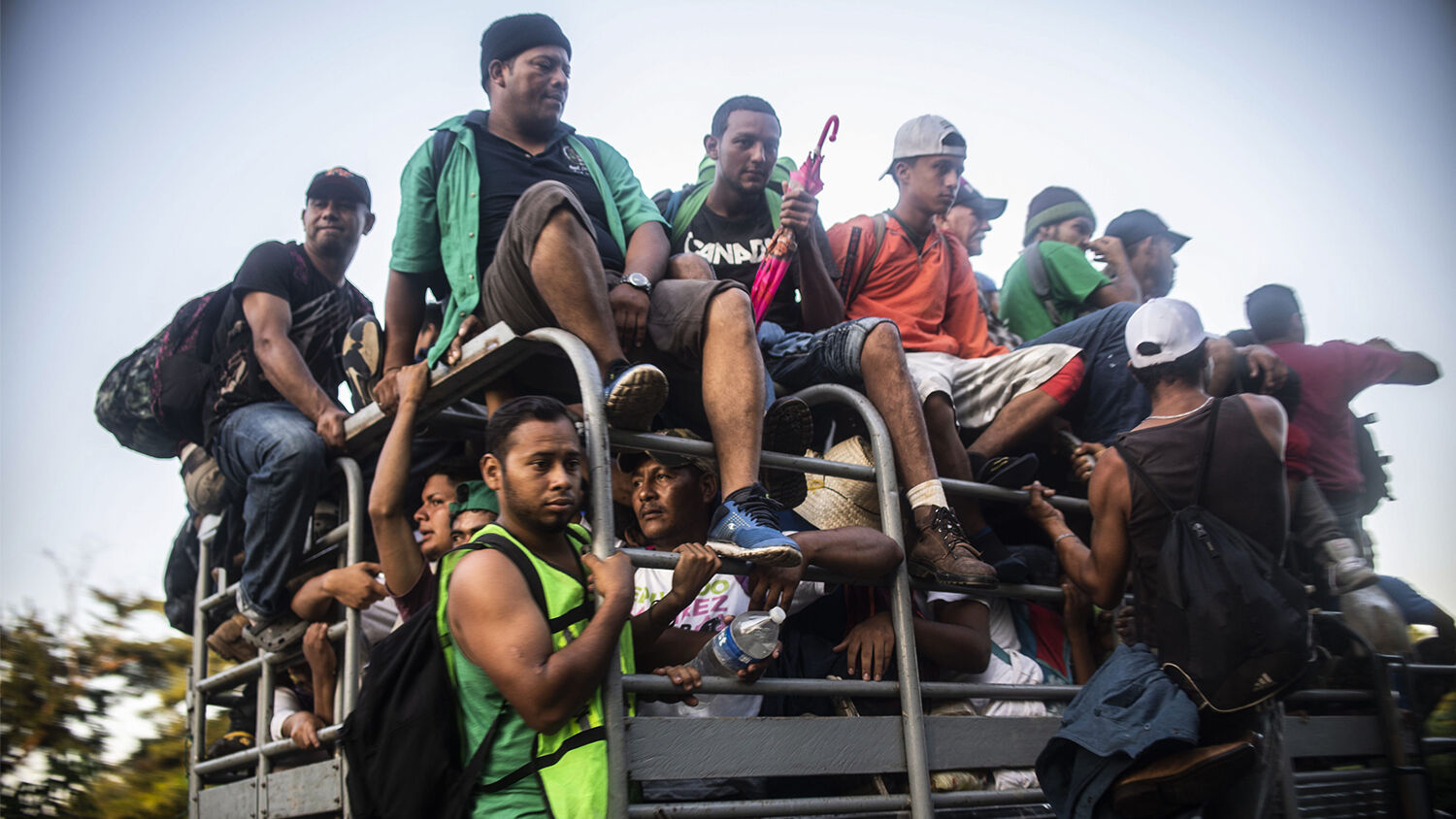 Honduran migrants traveling in a caravan to the U.S. cross Chiapas state in Mexico on October 25.
PEDRO PARDO/AFP/Getty Images

A caravan of foreigners headed toward the U.S. border is a harbinger of much bigger problems to come.

A procession of several thousand migrants set out on October 12 from Honduras on a quest to enter the United States illegally. After the caravan crossed Honduras and Guatemala, it illegally entered Mexico. This prompted U.S. President Donald Trump to rebuke the governments of Honduras, Guatemala and Mexico for not halting the group.

According to municipal authorities in Mexico, roughly one third of the 7,000-person strong caravan is comprised of military-age adult males. Citing reports that criminals and unknown Middle Easterners may be mixed among them, President Trump published a series of posts on Twitter on October 22 declaring a state of “national emergency.”

Sadly, it looks like Mexico’s Police and Military are unable to stop the Caravan heading to the Southern Border of the United States. Criminals and unknown Middle Easterners are mixed in. I have alerted Border Patrol and Military that this is a National Emergy. Must change laws!

President Trump has threatened to send as many military troops as necessary to the border to stop these illegal immigrants. This is not the first time the president has issued such a warning. He proposed sending troops to the southern border last April in an effort to stop a caravan of illegals. His efforts stopped 1,000 immigrants from illegally crossing the border, but they have not prevented thousands of others from illegally sneaking into the U.S.

The migrants in this month’s caravan are unlikely to get across the border. Their brazen act of defiance against the U.S. government is meant to be a political statement. Central American migrants are determined to come to the U.S., and they are declaring their intentions to the world to drum up political support for their cause.

Already, political division between Republicans and Democrats over the issue of illegal immigration is tearing at the fabric of the nation. Meanwhile, illegal immigrants in the U.S. workforce are taking jobs from America’s lowest-skilled laborers, thus trapping them in a cycle of poverty. The result is political radicalization and economic stagnation.

One perceptive columnist at Universal Press Syndicate, Georgie Anne Geyer, predicted this sobering state of affairs in a syndicated column published May 8, 1984:

The United States has about five years left before the population imbalance in the entire Southwest will be so tilted toward the illegal aliens that there will be no possibility of passing any legislation at all. … Within 20 years, this illegal community will begin organizing politically, demanding rights even as they refuse to become citizens. (Mexicans have the lowest rate of naturalization of any ethnic group; they look at the Southwest as still part of Mexico.) They will be led by self-styled caudillos and gangs. The rule of law will pass with the idea of American citizenship. If the Marxist civil wars in Central America are not contained, we will see a hemorrhage of Central Americans, many of them carrying with them extremist, Marxist and irredentist ideologies.

The problems Geyer described have grown progressively worse since 1984. Central American migrants are hemorrhaging into the United States—bringing radical ideologies and bolstering the numbers of street gangs like MS-13. Yet Geyer was not the first to predict this problem. Almost 3,500 years ago, the Prophet Moses recorded God’s promise to bless Israel for obedience to His laws and curse it for disobedience. One of the curses that God said would come on Israel for disobedience was an open border—foreigners flooding uninhibited into the land.

“But it shall come to pass, if thou wilt not hearken unto the voice of the Lord thy God, to observe to do all his commandments and his statutes which I command thee this day; that all these curses shall come upon thee, and overtake thee …. The Lord shall bring a nation against thee from far, from the end of the earth, as swift as the eagle flieth; a nation whose tongue thou shalt not understand …. And he shall besiege thee in all thy gates, until thy high and fenced walls come down, wherein thou trustedst, throughout all thy land: and he shall besiege thee in all thy gates throughout all thy land, which the Lord thy God hath given thee” (Deuteronomy 28:15, 49, 52).

Herbert W. Armstrong explained in his most popular book, The United States and Britain in Prophecy, that these verses and many others apply primarily to the end-time descendants of ancient Israel: the U.S. and Britain. The reference to Israel’s “high and fenced walls” coming down is about open borders where foreigners flood into the land. Currently, the foreigners flooding across America’s borders are from nations like Honduras, Guatemala and Mexico. But the Bible prophesies in other passages that foreign enemies from Europe will soon join their ranks.

The Prophet Isaiah calls Assyria “the rod” of God’s anger and “the staff” of His indignation (Isaiah 10:5). The United States and Britain in Prophecy also explains how the ancient Assyrians settled in modern-day Germany. It will ultimately be Germany, therefore, that partners with hostile nations in Latin America to besiege and invade the United States.

Pointing to Bible prophecy, Mr. Armstrong wrote in 1956 that barely a third of Americans would survive this time of besiegement and invasion (Ezekiel 5:1-2). Then he explained what will happen to that remaining third: “And that surviving third will be uprooted from their homes—transported like cattle as slaves to Europe, and probably some to South America (the Germans are fast gaining dominance and control in South America).”

As shocking as that statement sounds, the Bible makes clear that this is the punishment to come from failing to “hearken unto the voice of the Lord thy God, to observe to do all his commandments and his statutes.” To learn more about what is prophesied to happen to America in the near future, request a free copy of The United States and Britain in Prophecy.