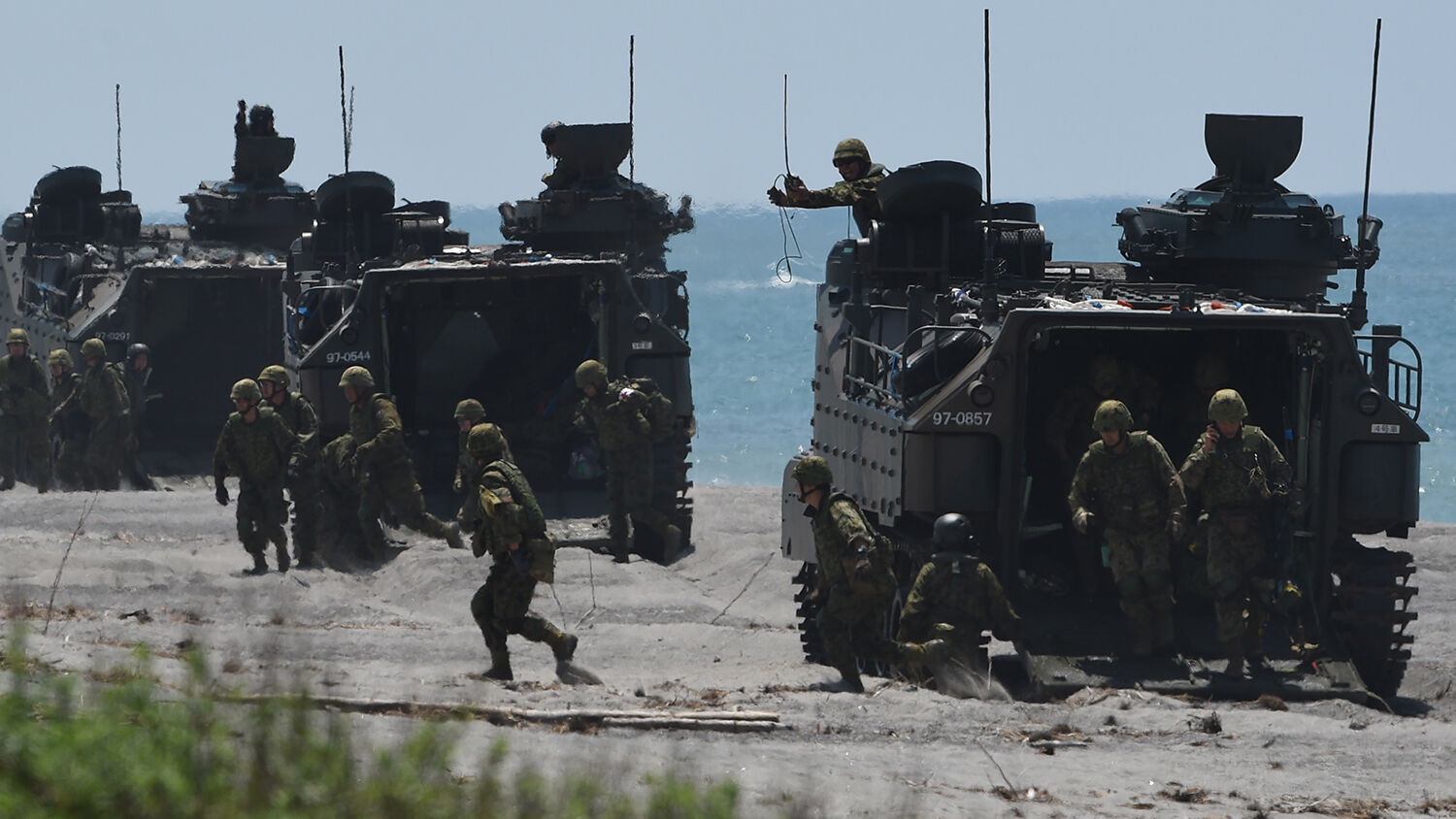 Japanese Ground Home Defense Forces disembark from their amphibious assault vehicles during a landing exercise at beach of the Philippine Navy training center on the South China Sea, north of Manila, on October 6.
TED ALJIBE/AFP/Getty Images

Japan’s amphibious unit is new, but its push for militarism is not.

Roughly 150 Japanese marines in amphibious vehicles stormed a Philippine beach on October 13 as part of the annual Kamandag military exercises. This marked the first time since World War ii that Japanese fighting vehicles have deployed on foreign soil. The Philippines, the United States and Japan participated in this year’s exercise, with Japan demonstrating its new Amphibious Rapid Deployment Unit, a group similar in strategic purpose to the U.S. Marine Corps.

The Amphibious Rapid Deployment Unit consists of roughly 2,100 marines and will continue to grow. According to Nikkei Asian Review, it is specifically designed “to take back islands in the case of a foreign occupation.” At its activation ceremony in early April, Japanese Vice Defense Minister Tomohiro Yamamoto stated, “Given the increasingly difficult defense and security situation surrounding Japan, defense of our islands has become a critical mandate.”

Although Japan labeled Kamandag as a counterterrorism drill, the exercises clearly have an application to China’s increasingly bold behavior in the region. The amphibious landings practiced last week could be used to recapture small islands in the event of “a foreign occupation,” such as China acting on its claim to the Senkaku Islands.

From 2012 to spring 2015, Japan participated in 53 military drills with foreign powers. From April 2015 to June 2018, it held 66. The annual Kamandag exercises in the Philippines usually involve only the militaries of the Philippines and the U.S. Earlier this month, Japan’s amphibious unit also participated in a similar exercise, Operation Keen Sword, with American sailors and marines.

In September, Japan conducted anti-submarine warfare drills within China’s so-called Nine-Dash Line, a region including most of the South China Sea. The drill—involving a Japanese submarine, helicopter carrier and two destroyers—prompted a warning from Chinese Foreign Ministry spokesman Geng Shuang, who cautioned Japan to “refrain from doing anything that will undermine regional peace and stability.” After completing the drills, the submarine made a stopover in Vietnam, which is involved in the South China Sea territorial dispute.

Chinese expansion in the South China Sea concerns the Japanese government and is a motivating factor in Japan’s push for military development. Six nations have claims in the South China Sea, with China the most aggressive and militaristic among them. If it takes full control of the area, which includes vital shipping routes, it will gain a massive amount of economic, political and strategic leverage.

According to Japan’s annual military white paper, “The security environment surrounding Japan has become increasingly severe, with various challenges and destabilizing factors becoming more tangible and acute.” For example, in the first half of 2018, Japan was forced to scramble fighter jets 20 percent more times than the same period in 2017. These conditions compel Japan to militarize, regardless of its pacifist Constitution.

Japan’s solution for Chinese aggression is clear: The military must be strengthened.

Speaking at the Japan Self-Defense Force Day ceremony on October 15, Prime Minister Shinzō Abe pledged to renew his fight to revise the nation’s pacifist Constitution. He told the 4,000 personnel present that they had “gained public trust” and that his responsibility was to create a legal environment where the Self-Defense Force could “accomplish their duties with [a] sense of pride.”

By some estimates, Japan’s military is already the fifth-most powerful in the world. Japan has developed aircraft carriers in all but name; with modifications to their flight decks, Japanese helicopter carriers Kaga and Izumo would be able to launch and recover F-35B stealth fighters. This sends a definite message to China, which is working to expand its navy and has recently deployed its own aircraft carrier.

Herbert W. Armstrong predicted Japan’s return to militarism. “Japan today has no military establishment,” he wrote. “But we should not lose sight of the fact that Japan has become so powerful economically that it could build a military force of very great power very rapidly” (Plain Truth, March 1971).

We ask in our Trend article “Why the Trumpet Watches Japan’s March Toward Militarism”:

Mr. Armstrong’s view was informed by specific Bible prophecies. Journalists sometimes mention the biblical word Armageddon found in Revelation 16:16, but it is rare to hear talk of “the kings of the east” discussed in verse 12 of that same chapter. The Bible shows that these “kings of the east” will be a massive bloc of Asian nations that pool their militaries together in the end time. They do this in order to confront another power bloc led by Germany. Revelation 9:16 says that the Asian army will be comprised of a jaw-dropping 200 million soldiers.

For more on why Japan will be part of these “kings of the east,” read “Why the Trumpet Watches Japan’s March Toward Militarism.”