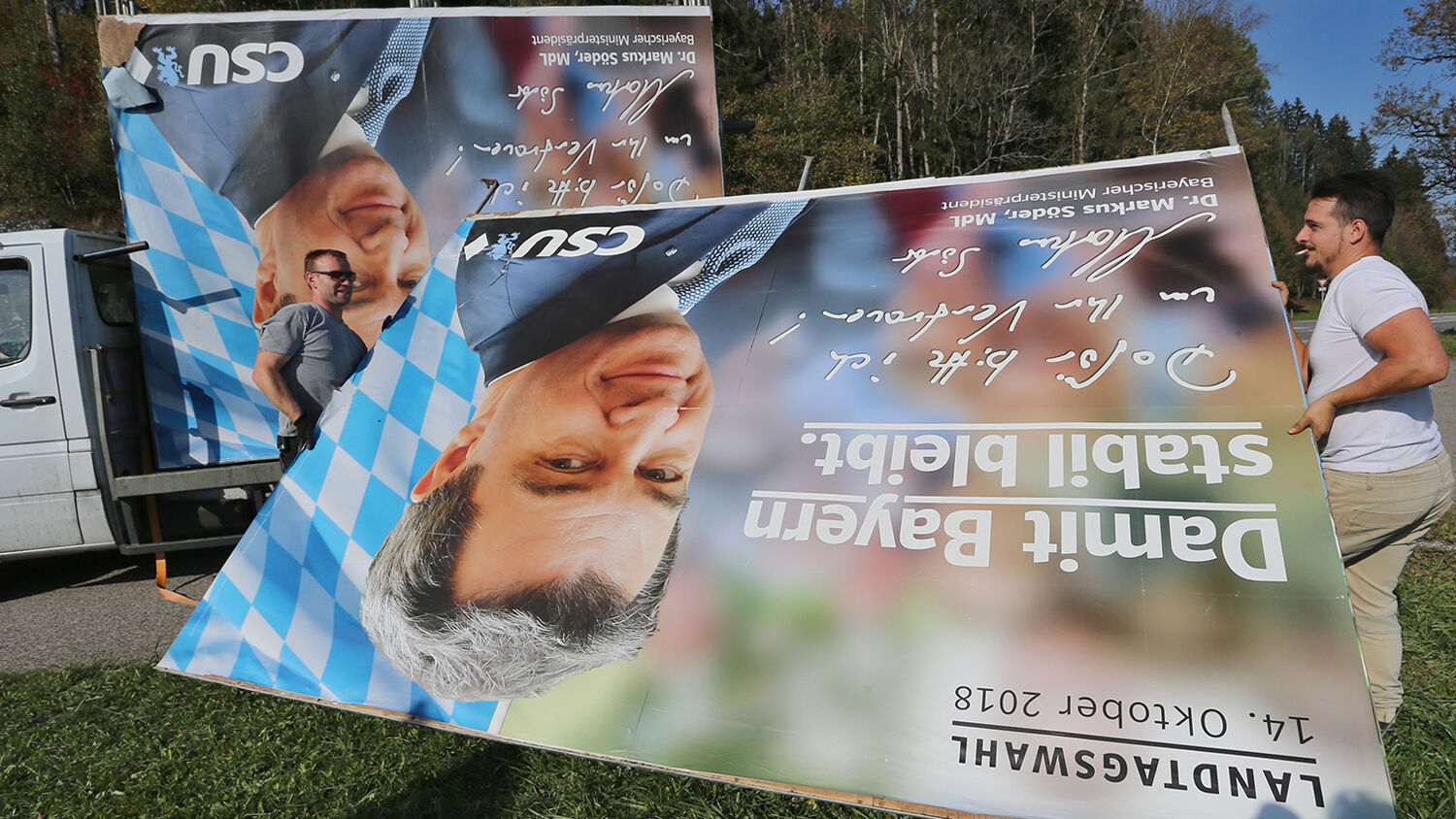 Are we about to see job vacancies in one of Germany’s most important political parties?

The German state of Bavaria held an election on October 14. The result showed that many are upset—not only with Bavaria’s leadership but also with Berlin’s.

The conservative Christian Social Union (csu) has ruled Bavaria for decades, most of the time with an absolute majority and no need for a coalition partner. But on Monday, the csu suffered its worst election result in 68 years and a rare loss of its absolute majority. Over the past five years, support for the csu has fallen 10.5 percentage points.

Alternative für Deutschland (AfD) received 10.2 percent of the vote and entered the Bavarian parliament. If the upcoming election in Hesse goes as predicted, the five-year-old right-wing party will soon have members seated in every German state.

The Greens Party, which focuses on environmental protection and social justice, won 17.5 percent of the vote and will enter Bavaria’s legislature as the second-strongest party. The Free Voters won 11.6 percent and are considered a good coalition option for the csu.

The Social Democrats (spd) are seen as the biggest losers of the election. The party lost more than half of the votes it had received in 2013. spd national chairwoman Andrea Naples said, “There’s no doubt that one reason for our poor performance in Bavaria was the poor performance of the grand coalition here in Berlin.” German newspaper Die Welt reported: “This Defeat Might Mean the End of Merkel’s Grand Coalition” (Trumpet translation throughout).

Many believe that the historic defeat for the csu and spd will result in a dramatic leadership change. The large loss of over 20 percent collectively by the spd and csu is seen largely as a result of the continued infighting in Berlin. If nothing changes in Berlin, the people will continue to vote for change, no matter who is running Bavaria. spd deputy leader Ralf Stegner told Phoenix tv that “the citizens delivered a resounding slap” to the governing parties and that, unless something changes at the top, “the grand coalition won’t last much longer.”

However, the AfD also underperformed in the election. The party leadership had hoped for big gains in conservative Bavaria, which has been heavily afflicted by the refugee crisis. Deutsche Welle reported October 14:

Part of the AfD’s difficulties may have been the lack of a charismatic lead candidate and the reticence of Catholic voters in the face of some of the populists’ more hard-line positions. The Free Voters, who beat out the AfD for third place, likely also siphoned off some conservative voters disgruntled with the csu.

The csu and AfD have fought over the same pool of voters while neglecting the more liberal parts of the population. Most who voted for the AfD did so mainly to show their opposition to German Chancellor Angela Merkel’s refugee policy. The AfD campaigned with the demand that “Merkel has to go.” But beyond strongly opposing Merkel, the AfD had little more to offer Bavarians than the csu already does.

Sensing the disquiet and fearing big losses to the AfD, the csu drifted toward the right to regain voters. But since it is still in a coalition with Chancellor Merkel’s Christian Democratic Union (cdu)—and is therefore tacitly supporting her lenient refugee policy—csu slogans espousing right-wing views came across as disingenuous.

The loss of support for the cdu and csu is causing more and more party members to revolt. In two weeks, state elections will be held in Hesse. If the predictions are right, the Social and Christian Democrats will again suffer historic losses. This might heavily influence the cdu’s next election for party leadership, which is set for December. Merkel currently holds the chancellorship, and she has led the cdu for 18 years, but the recent poor performance in state elections might cost her the leadership of the party and the nation. Opposing candidates seem puny compared to her, but poor state election results and infighting make anything seem possible.

At the same time that Merkel is watching the uproar in her own party, she is also dealing with a coalition partner fighting for its survival. The Social Democrats know that as long as they appear as a mere puppet of Merkel’s, they will never recover their historic losses.

Where are these political earthquakes leading? Who can put an end to them?

Since 2017’s devastating national election results, the csu has tried everything to secure its power in Bavaria. With State Premier Markus Söder, the party had hoped to give the election an untainted face from the turmoil in Berlin; Horst Seehofer was forced to retreat to Berlin. But the attempts to please the largely conservative, Catholic Bavaria failed miserably. The Guardian reported:

“A lot of trust has been lost,” the German chancellor said at a business conference on Monday, a day after her Bavarian allies in the Christian Social Union (csu) were handed their worst result since 1954 in the prosperous southern state.

She said the result had shown that even a thriving economy and high employment were not enough to win over voters. As a consequence, her biggest takeaway from Sunday’s trouncing was that she “must better ensure that this trust is there and also make the results of our work visible,” she said.

Many in the csu had hoped to be able to imitate Austrian Chancellor Sebastian Kurz’s results. He was able to adopt many of the far-right ideas while at the same time presenting himself as a Christian chancellor. Instead of being rebuked by churches, like the AfD and csu were, Kurz was supported and promoted by high-ranking bishops. He got what the csu and AfD failed to get: the trust of the people. Austrians see in Kurz a leader who is not only protecting them from huge influxes of refugees but also serving as a moral guide. (Read more about how Kurz uses his Catholic faith in his politics in “The Holy Roman Empire Goes Public—Big Time!”, by Trumpet editor in chief Gerald Flurry.)

Germany is lacking charismatic leaders who convey such trust. In his latest Trumpet Brief, Richard Palmer highlighted the prophecies that we need to keep in mind while watching the aftermath of Sunday’s election. He wrote:

Many prophecies throughout the Bible talk about the rise of a strong leader in Germany. Daniel 8:23-24 describe the rise of “a king of fierce countenance, and understanding dark sentences.” Verse 25 says that he will be defeated after he stands up “against the Prince of princes,” revealing the time frame for this fierce king’s reign. He will come to power in the very end time, right before Jesus Christ’s Second Coming.

As Trumpet staff members watch for this leader, our attention has been drawn to politicians from the Christian Social Union. Herbert W. Armstrong thought that perhaps the late chairman of the csu, Franz Josef Strauss, could fulfill this role. Strauss died in 1988, but he is still revered today. (On the 30th anniversary of his death last week, all the top csu leaders attended a ceremony in honor of their political “father figure.”) Our attention was next drawn to former chairman Edmund Stoiber, a Strauss protégé. Then we focused on Stoiber’s protégé: csu rising-star Karl-Theodor zu Guttenberg.

Guttenberg was forced out of politics in 2011. But a major shake-up in the csu and a crisis in German politics could help persuade him to return.

In this brief e-mail, there isn’t space to present the full proof from the Bible of why these scriptures apply to modern Germany—and why we think Guttenberg fulfills this role prophesied in Daniel 8. But we have a free booklet on exactly this subject—titled A Strong German Leader Is Imminent. Order your free copy, and while you’re waiting, have a look at our 90-second video “Who Is Karl-Theodor zu Guttenberg?”