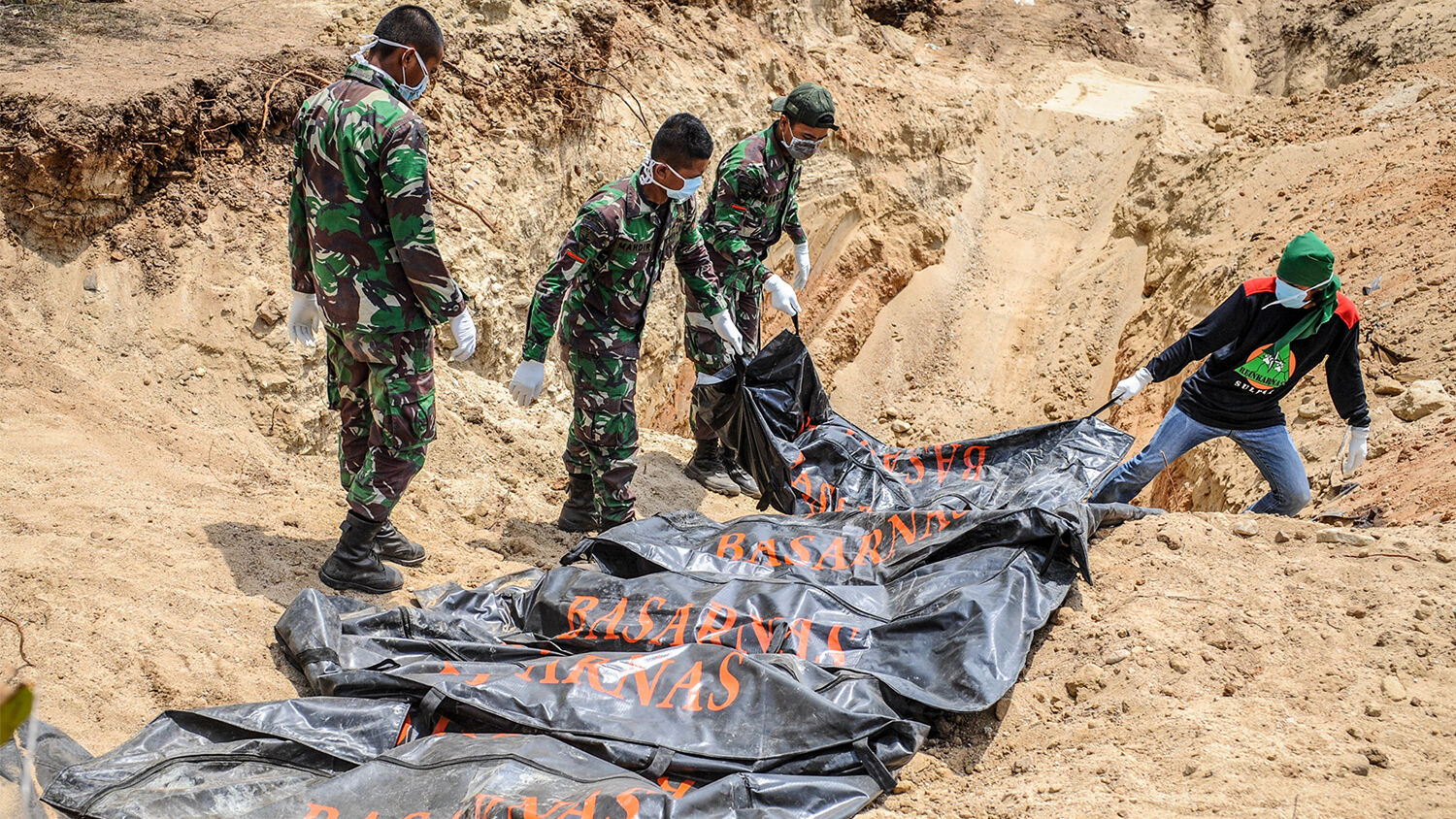 Officers place the bodies of victims into a mass grave in Poboya.
Getty Images

A wake-up call for the world

More than 1,900 people are dead and another 5,000 missing after a 7.5-magnitude earthquake struck Indonesia on September 28. Survivors recounted horrific tales of the ground lurching, being flung into the air, and watching as their homes and loved ones were engulfed in liquefied earth.

The quake struck the Indonesian island of Sulawesi, causing the regional capital of Palu to crumble. Away from the city, people fared no better. Sandy soil liquefied, wreaking havoc on towns throughout the region. Some survivors said it felt as though a giant earthworm was moving beneath them, chasing them and dragging them below the ground.

Towering up to 20 feet high, the tsunami caused by the earthquake pounded the Indonesian coastline. Battered survivors could do little to escape the barreling wall of water. Ships thundered into Palu. Cars flipped over and buildings destroyed by the earthquake were swept away.

On October 3, the same island was struck by a volcanic eruption. While nobody was killed, more were evacuated as Mount Soputan spewed ash 19,000 feet into the sky.

More than 70,000 people are now homeless. Those who cannot search for survivors await evacuation and supplies.

In the aftermath, the blame game has begun. Many are critical of the government for not maintaining adequate tsunami warning systems. The antiquated and dilapidated warnings did little to spare the residents of Palu. The first waves struck just four minutes after the earthquake. How could the residents plan their escape?

Yet in another sense, the people were warned. In fact, there has been a worldwide warning. It has been issued for thousands of years and was first uttered by Jesus Christ Himself. Any people or nation exposed to the truth of the Bible has been warned of impending “natural” disasters.

While Christ didn’t specify the where and when, notice what He forecast: “And ye shall hear of wars and rumours of wars …. For nation shall rise against nation, and kingdom against kingdom: and there shall be famines, and pestilences, and earthquakes, in divers [different] places” (Matthew 24:6-7). Luke’s account of the same prophecy reads, “And great earthquakes shall be in divers places, and famines, and pestilences; and fearful sights and great signs shall there be from heaven” (Luke 21:11).

Christ foretold that “natural” disasters would increase as His return drew closer. Throughout the world we have seen this increase. Scholars, scientists and academics would love to foist blame on climate change or some other phenomena. Anything but the fulfilment of Bible prophecy.

We do so at our peril.

Christ tells us, “All these are the beginning of sorrows” [Matthew 24:8].

The point at which we find ourselves today, Christ told us, is only the beginning of sorrows!

Where are we in Bible prophecy? We are at the beginning of sorrows! The disasters occurring before our eyes are just the beginning. They are going to get much worse.

For many in Palu, today may seem like the end of the world. But Christ warns that more disasters are coming worldwide. God is shaking the nations as never before!

These are not normal times. The Bible says earthquakes, droughts, floods, tornadoes, hurricanes and tsunamis are anything but normal. They are curses man has brought upon himself as a result of disobedience to God’s laws. And the Bible says that, in the modern nations of Israel, these curses are about to explode—they are about to get so bad that they can legitimately be compared to the events described in the pages of the Holy Bible!

God is not cruel, deriving pleasure from seeing men suffer. Instead, God is trying to get through to hard-headed human beings before it gets much worse! “God, in His mercy, is trying to shake our peoples out of their drunken stupor before the real Armageddon-like events hit home!” (ibid).

And even then, God will mercifully cut the suffering short (Matthew 24:21-22).

Christ rebuked the religious leaders of His day. They could discern the weather, but they couldn’t discern the signs of the times. They wouldn’t obey and they wouldn’t heed Christ’s warning! If you would like to heed the warning and make sense of our world filled with “natural” disasters, order your free copy of Why ‘Natural’ Disasters?

God is sending out a warning to every one of us. Now, more than ever, we need to understand why “natural” disasters are happening.