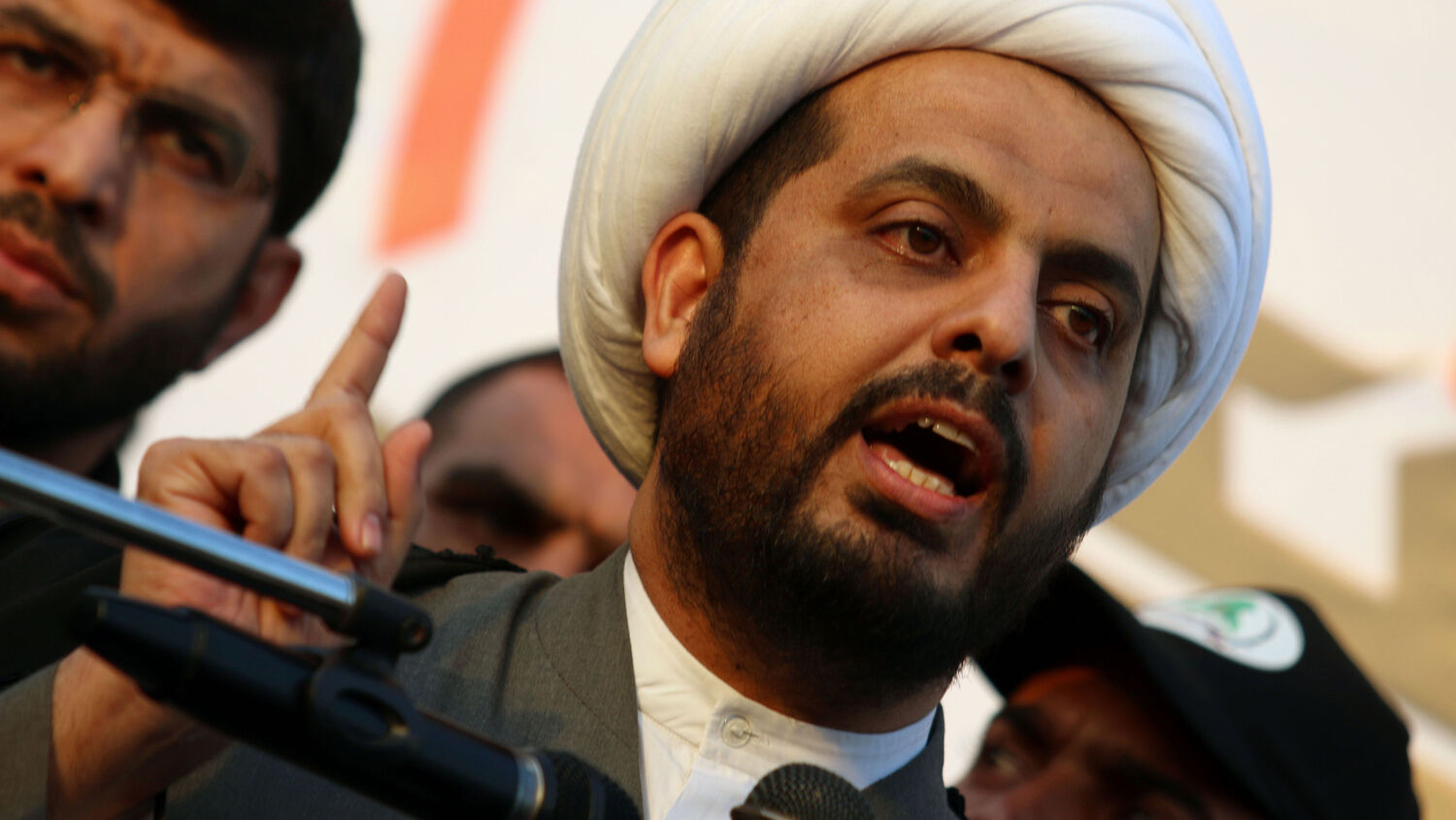 “The most powerful [Islamic] country in the Middle East is Iran. Can you imagine the power it would have if it gained control of Iraq, the second-largest oil-producing country in the world?”

Trumpet editor in chief Gerald Flurry asked this question in “Is Iraq About to Fall to Iran?” That article was published in December 1994. (We published an updated version of this article in 2003.) Today, there is no denying Iran’s aggressive efforts to take over Iraq.

Anyone who still has doubts should learn about Iraq’s Iranian killer kingmaker.

His name is Qais al-Khazali, and he is a murderer and a terrorist. He is also a driving force behind Iran’s effort to embed itself in Iraqi politics. He is a former student of Mohammed Sadiq al-Sadr, the father of Iraqi warlord Muqtada al-Sadr.

Khazali rose to prominence fighting against the United States in the Iraq War. He authorized the 2007 kidnapping of five U.S. soldiers, who were captured and executed. A mock-up of the kidnapping location was later discovered in Iran.

Khazali is linked to the “special groups” that carried out over 6,000 attacks on coalition forces. His hands are also wet with the blood of his own countrymen. Khazali and his militiamen have played a significant part in capturing Islamic State territory—and the subsequent ethnic cleansing of Iraq’s Sunni and Kurdish populations.

But it is Khazali’s hatred of Americans that sets him in a league of his own. Notice the following report from conservative think tank American Enterprise Institute:

As bad as Sadr was, Khazali made a name for himself by his single-minded bloodthirstiness. Whereas Sadr was mercurial and inconsistent, Khazali was relentless in his efforts to kill coalition personnel. While Sadr was just as interested in protecting and succouring the Iraqi Shia community, Khazali was interested only in killing.

This single-minded, anti-American mindset was something Iran could support. During his rapid rise, Khazali has rubbed shoulders with Iran’s elite, including the infamous Qassem Suleimani. Khazali runs a Shiite militia called Asa’ib Ahl al-Haq—also known as the Khazali Network. It is funded by Iran.

Details of Khazali’s past have emerged from recently released interrogation reports. Khazali was captured in 2007 and released in a prisoner swap in 2010. But not before he “spilled the beans” on his fellow jihadists and even his Iranian taskmasters. The reports show Iran’s role in targeting U.S. and coalition forces during the war.

The interrogation reports were undoubtedly declassified to undermine Khazali’s role in Iraq. The reports show he was happy to turn in his partners, from his lieutenant all the way down to his chauffeur, to save his own skin. Despite this, after his release Khazali remains a key Iranian puppet. This shows how important the man is to Iran’s goal of controlling Iraq.

As Iran’s impact in Iraq has grown, so too has that of the Khazali Network. The terrorist group is a key member of the Popular Mobilization Units, which have lingered after the Islamic State’s departure. Not content to be confined to the battlefield, the Khazali Network formed a political group in 2017.

Today Khazali—corrupt, sectarian, Iran-backed terrorist and killer of Americans—is also a kingmaker. In Iraq’s May 12 elections, the Khazali Network won 15 seats in parliament. The elections were widely seen as corrupt and fraudulent. But Khazali—and his Iranian masters—have not been challenged. Most groups received a similar number of seats as in the previous election. But the Khazali Network leaped from its one seat in 2014 to taking 15 this year. As the American Enterprise Institute noted, the group has done little to gain 15 times the amount of support. Other parties that fought the Islamic State gained no headway. The Badr militia, for instance, won 22 seats last time and 22 this time. This makes the Khazali Network’s rise all the more suspicious.

Khazali’s 15 seats might seem inconsequential in a parliament of 329 seats. But they are not. The problem is that the parliament is split among several groups, and a coalition of multiple parties is required to form a government. There are two general opposing sides. One is dominated by Sadr and Haider al-Abadi. This is the U.S.-preferred group. Then you have the opposition: former Prime Minister Nouri al-Maliki and the pro-Iranian militias, which currently include the Khazali Network.

Both groups are trying to coerce lawmakers from the opposing camp. It is a desperate race to see who can form a majority first. Last Sunday, both sides claimed to have the numbers for a government.

Khazali and his supporters are part of an alliance of militia groups known as the Fatah Alliance. This alliance is dominated by the Iranian-funded Badr militia and its leader, Hadi al-Amiri.

In the aftermath of the May elections, Sadr has tried to form a government with both sides. First he tried with the Fatah Alliance, now he is trying with Abadi’s party.

With the larger groups at odds and vying for more power, smaller parties like the Khazali Network suddenly become kingmakers.

Whether Khazali’s party makes it into the government remains to be seen. Regardless, the mere presence of this man shows the political clout Iran now holds in Iraq. “It makes you realize how far Iraq has fallen, and how badly we have handled Iraq in recent years,” wrote the American Enterprise Institute’s Kenneth Pollack. “One of [Iran’s] main proxies is now a kingmaker, and possibly soon a cabinet minister, in the Iraqi government.”

History shows how Islamic extremism can dramatically change the politics within a country, and it gives us an indication of the kind of power Iran could be very close to achieving.

That is exactly what has happened since the arrival of the Islamic State! Iran has capitalized and is now seizing the reins in Iraq! Mr. Flurry continued:

[T]hough the current U.S. administration is vowing not to allow an Iranian-style theocracy to gain hold in Iraq, there are also signs in the way it is rebuilding the country that show a fundamental lack of political will to see this pledge through. Perhaps it will not be during the term of the current president, but the Bible shows that America will fail to contain Iran the way it hopes to.

And where does the Bible forecast regarding Iran’s success? Daniel 11:40 describes Iran-led radical Islam as “the king of the south.” The following video explains this in brief, specifically showing which specific nations will be included in this radical alliance.

The aforementioned 2003 article has also been included in a powerful booklet by Mr. Flurry titled The King of the South. Follow this link to order your free copy.

The political theater in Iraq might seem chaotic, but we know the end result. God is clear in detailing who will come out on top in Iraq—in the short term.

“In the short term” because prophecy does not end with Iran’s rise to power. God also records the sudden demise of this king of the south. It will come about in a whirlwind.

Khazali and Iran might have their day today, but God says it will come to a swift end.

And God even prophesies what will come after that! God lays out the specific details that lead all the way to the spectacular return of Jesus Christ!

If the chaos of the Middle East seems hard to distill, consider reading or rereading Mr. Flurry’s booklet. It explains in detail the big picture of what God says will happen. It tells us the nations that will be involved. It answers questions like “Is Iraq about to fall to Iran?” It will show you how to avoid the dangers ahead. And most importantly, it explains how you can be a part of the amazing future that lies beyond.