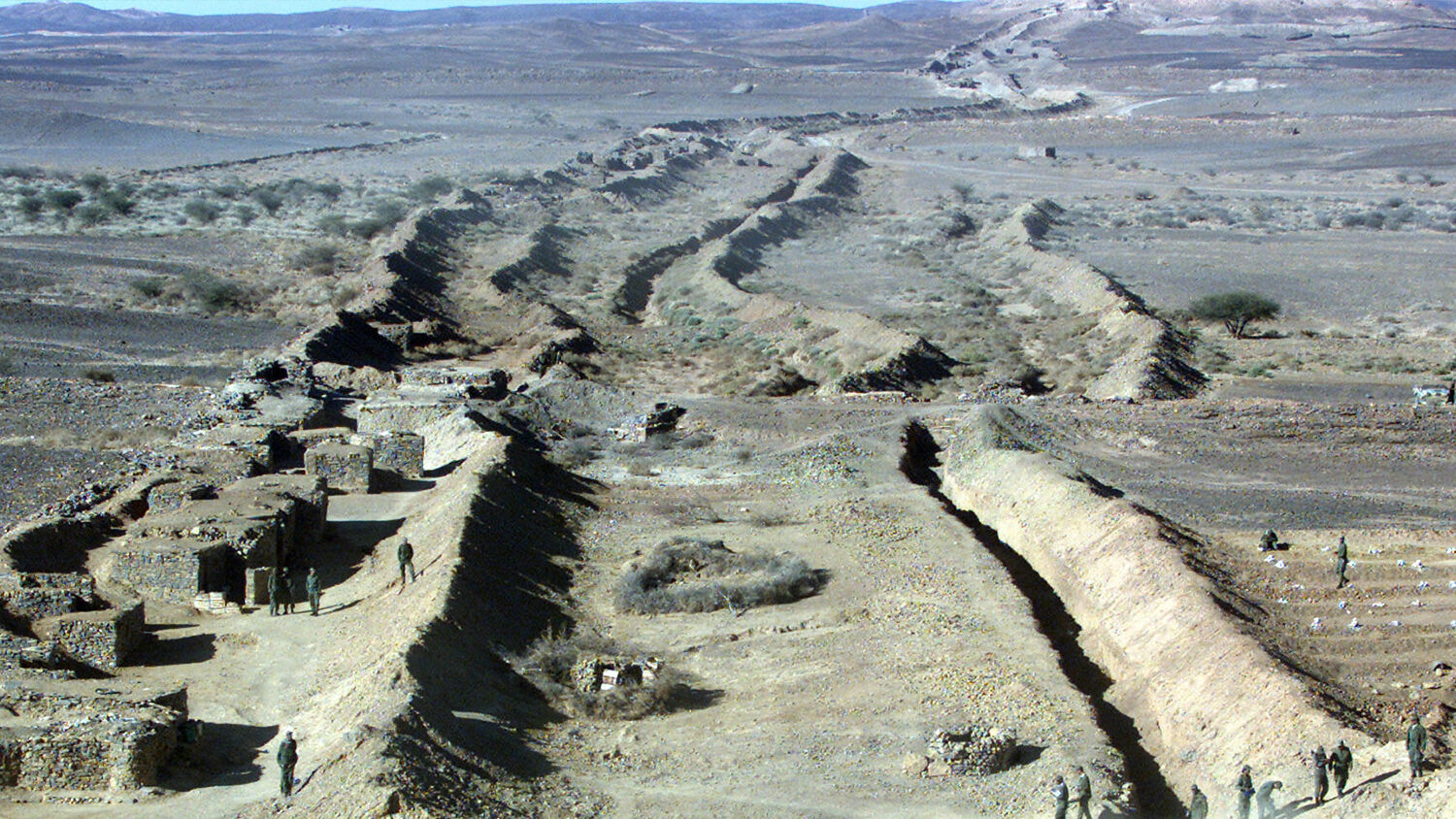 brisbane
The Moroccan Western Sahara Wall looks like a long and ragged scar on the desert. The sand and stone berm reaches 9 feet high, clearly visible over the harsh landscape. It runs more than 1,700 miles through Western Sahara and into Morocco. The only signs of life are the artillery, trenches and military installations along the berm. The wall also includes the longest continuous minefield in the world.

The wall is here to guard against the forces of radical Islam. It is here that Iran appears to be mounting a fresh offensive in the battle to establish a Shia Crescent.

Western Sahara is a disputed territory in the Maghreb region of North Africa. Morocco controls the broad section west of the wall. The east is occupied by the Sahrawi Liberation Army, also known as the Polisario Front, which is reportedly sponsored by Iran.

The Polisario Front has been seeking the creation of an independent state, the Sahrawi Arab Democratic Republic (sadr) for years. But in 1975, Spain and Morocco signed the Madrid Accords, whereby Spain withdrew from the region and the land was annexed by Morocco. There has been violence between the Polisario Front and Moroccan forces ever since.

A United Nations ceasefire in 1991 deescalated the tension. But Moroccan forces stand guard at the wall to this day.

The Polisario Front has some support at the UN for independence. At various times, 84 UN member states have recognized sadr. Iran is a notable inclusion in the list: Its regime recognized sadr just one year after the Iranian Revolution.

Morocco has much more support, including the backing of the United States. Many nations in the West are reluctant to see sadr break away. With very little to support an economy, there is a high risk that sadr could collapse into a failed state. With little military power, it could also become a home for radicals. Or worse, it could become a proxy of a foreign power like Iran.

On May 1, Morocco cut diplomatic ties with Iran and withdrew its ambassador to Iran. Moroccan Foreign Affairs Minister Nasser Bourita made some bold claims: He announced that the government had evidence of Iran supporting the Polisario Front and that Iran was providing military training and weapons to Polisario soldiers through Hezbollah.

“Hezbollah’s actions seek to undermine Moroccan interests and constitute an attack on the country’s territorial integrity,” Bourita told Morocco World News in May.

Iran has rejected the claim. And Moroccan authorities have refused to release all their proof. But there is plenty to indicate Moroccan authorities are telling the truth. For one, the Polisario Front is based out of Algeria, a known playground of Hezbollah. On May 16, Bourita claimed to have a file that included “proven and precise facts: dates of visits by senior officers of Hezbollah in Algeria, dates and venues of meetings with Polisario officials, and a list of names of agents involved in these contacts.”

The evidence dates to 2016, when Hezbollah set up a committee to support the Polisario Front. The claims have been verified by Algerian news outlets. The Algerian Times ran a story in April discussing “continuous military training from Hezbollah in tunnels, dug under the Moroccan defense wall.”

Photographs have surfaced of senior Polisario leadership meeting with Hezbollah members in Lebanon. Iran is accused of funneling missiles to the Polisario Front via its embassy in Algeria. Such direct Iranian involvement is unprecedented in Morocco.

Not so across the rest of Africa. In 2012, it supported the Egyptian terrorists who carried out the infamous Benghazi attack. In 2013, Iran-sponsored terrorists seized a natural gas facility in Algeria. Radical Islam is also flourishing in Mali. In late June, Islamic terrorists seized territory and imposed Islamic law. They slaughtered civilians, soldiers and even some French troops who were reinforcing Malian soldiers.

Then there is Boko Haram. These terrorists gain their arms and money from a variety of sources. That includes fellow terrorist groups al Qaeda and Somalia’s al-Shabaab. These two have a lengthy history of being armed, sponsored and trained by Iran.

There is nothing new about Iran’s efforts to sponsor radical Islam in Africa. But Morocco is an extremely consequential frontier.

The Polisario Front represents an opportunity for Iran to extend its power and broaden the Shia Crescent all the way to Europe’s doorstep.

Morocco sits nine miles off the coast of Europe, an ideal launching ground for illegal migrants trying to reach Europe. What happened to Libya after Muammar Qadhafi was overthrown is a good example of what could happen to Morocco.

Iran would love to destabilize Morocco through groups like the Polisario Front. Tehran knows how much this would rattle Europe and inflame the immigration crisis. The last thing Europe needs is another radical Islamic staging ground so close to home. If it happened, Iran would have incredible leverage over European politics.

But there is another reason Iran would love to export radicalism to Morocco. It has to do with Iran’s maritime strategy.

Across the Middle East and Africa, Iran is sponsoring uprisings near the world’s sea-lanes. Tehran already controls the Strait of Hormuz. It is sponsoring the Houthi uprising in Yemen—right next to the Bab el-Mandeb. Up the Red Sea, Iran has relations with Eritrea. Following the Arab Spring, Iran quickly developed ties with the ruling Muslim Brotherhood. When Libya was overthrown, it became a radical Islamic camp. These efforts show radical Islam and Iran are trying to seize control of vital sea-lanes.

The world economy relies on free passage through these critical thoroughfares. Controlling them would give Iran incredible power and leverage.

That is why Iran would love to gain influence in Morroco—near the Strait of Gibraltar. Twenty-five percent of the world’s shipping passes through this sea-lane, an estimated 120,000 vessels per year. To disrupt this flow—as the Houthi is attempting to do in Yemen—could throw Europe and the world economy into chaos.

Morocco is doing all it can to keep Iran out. And vast walls and minefields are not enough. That is why the Iranian Embassy was closed. It is also why the Moroccan government reintroduced the military draft.

The government claims the draft is meant to restore “the spirit of patriotism in young people.” It is also to help get kids off the streets. Youth unemployment is at 18 percent, according to the World Bank. For a stable nation like Morocco, that is enough to send discontent rumbling through the populace. Geopolitical Futures noted, “Unemployment is never good from an economic perspective, but from a security and political perspective, youth unemployment is especially troubling. Disgruntled youths in Morocco have started leading protests and marches in economically marginalized areas, such as Rif and Jerada.” The think tank also noted that extremism is on the rise:

The Economic and Social Council in Morocco study also noted that there is a strong tendency among contemporary youth toward greater religiosity. In the past, Morocco has been known for its rather secular and pro-Western society, even going so far as to ban the manufacture and sale of burqas in early 2017. But anti-West sentiment and religious zeal are both on the rise, which is raising concerns in Rabat and elsewhere about the potential for religious extremism to take hold.

Radical Islam loves to take over uprisings. Look at Syria. Look at Egypt. Grassroots protests quickly intermingle with extremists. This has happened in Morocco this year, when 30,000 protesters in Rabat were joined by 6,000 to 8,000 members of the banned Islamist movement al-Adl wal-Ihasan. The group is vying to create a Sufi Islamist state within the nation.

Add to all this the sure word of Bible prophecy. Did you know, for instance, that the Bible forecast Iran’s rise long ago? Daniel 11:40 even discusses Iran’s maritime strategy. These verses refer to Iran as “the king of the south.” Ensuing verses even show which nations will align with Iran. Ethiopia and Egypt are included in this list. Both are seen as relatively stable when compared to their neighbors. But God warns they will soon join the radical Islamic camp.

While Morocco is not mentioned in those prophecies, this geopolitically significant nation would fit perfectly into the Iranian sea-gate strategy.

In his 2013 article titled “Watch Algeria!”, Trumpet editor in chief Gerald Flurry wrote, “The Daniel 11:40 clash between the king of the south and the king of the north is about to be fulfilled! All of this violence in Africa is just a prelude to the fulfillment of this prophecy.”

You can read much more about this astounding prophecy in our free booklets The King of the South and Libya and Ethiopia in Prophecy. The Prophet Daniel warned of Iran’s pushy foreign policy and how it will soon get a response. There will be what the Bible describes as a whirlwind attack! And it is going to come from a German-led Europe. This prophecy is also explained in our free booklet Germany’s Secret Strategy to Destroy Iran.

Many news-watchers will be quick to dismiss the Bible as a news-watching source. But one third of the Bible is prophecy—news in advance! And time and again, we are seeing Bible prophecy vindicated.

The vast wall that runs through the deserts of Western Sahara might be far away, but it is important. It is the latest battleground in a soon-coming confrontation between Iranian-led radical Islam and a German-led Europe. Your Bible says that Europe will not stand for Iran’s pushy foreign policy much longer. The time to understand this terrible earthshaking forecast, how to avoid it, and the millennial future beyond, is now.