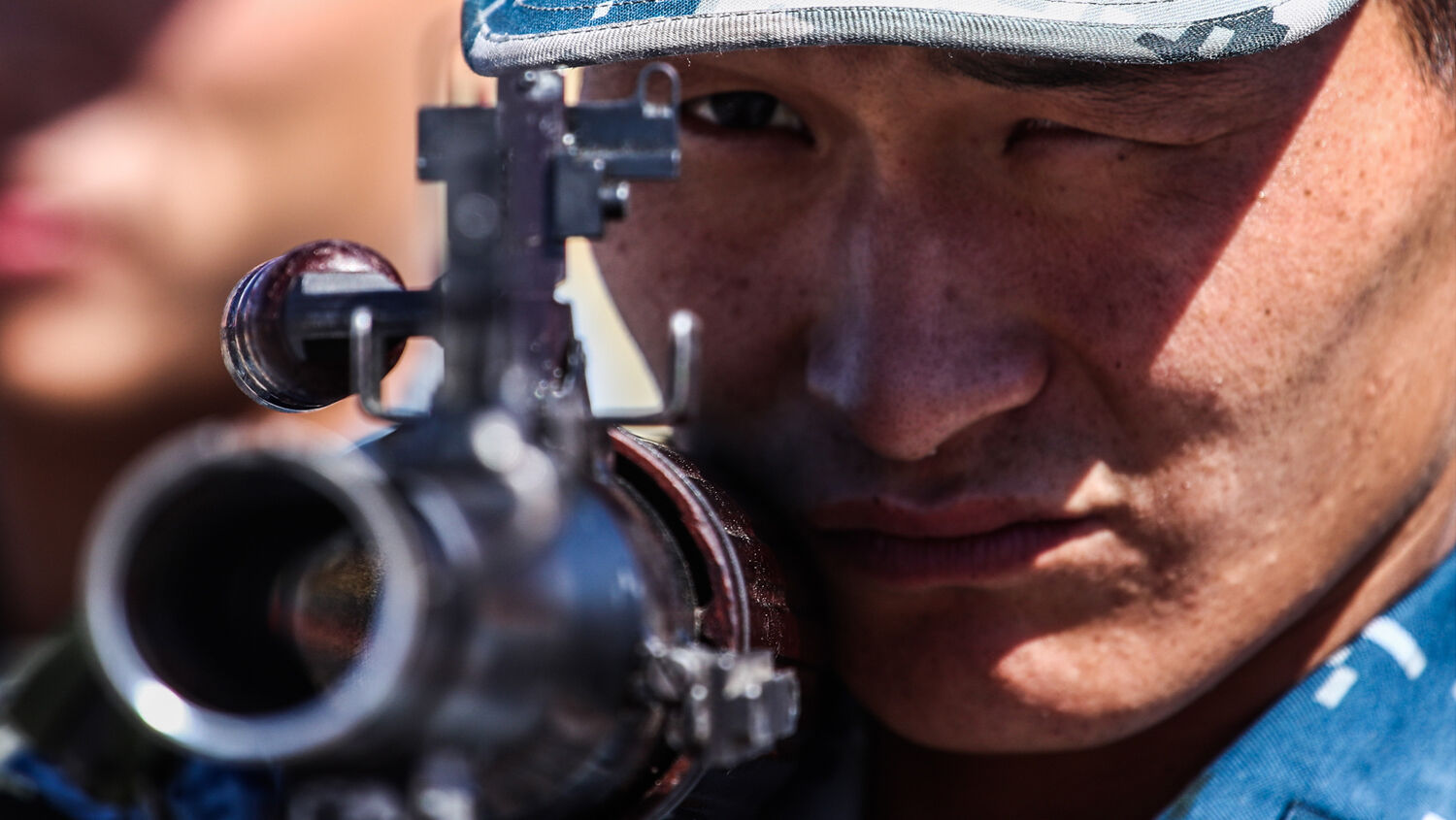 A participant from the People’s Republic of China competes in a relay race incorporating an obstacle course for air assault units with small arms during the Airborne Platoon contest at the 2018 International Army Games.
Getty Images

China is advancing its capability to strike United States targets and the island of Taiwan, according to the Pentagon’s latest annual report to Congress about “the current and probable future course” of the Chinese military, released August 16.

According to the report, the People’s Liberation Army (pla) is “likely preparing for a contingency to unify Taiwan with China by force, while simultaneously deterring, delaying or denying any third-party intervention on Taiwan’s behalf.” The report said that China has accumulated an array of military options against Taiwan which include a sea and air blockade, a full-scale amphibious invasion, threats of a full-scale amphibious invasion, and a surprise attack designed to “force rapid military and political resolutions before other countries could respond.” And should the U.S. respond, “China would try to delay effective intervention and seek victory in a high-intensity, limited war of short duration.”

Already, the pla is likely “training for strikes against U.S. and allied targets” and boosting its “capability to strike U.S. and allied forces and military bases in the western Pacific Ocean, including Guam,” according to the Pentagon.

China clearly is now a force to be reckoned with, and its use of force will have dramatic global ramifications.

Chinese leaders have branded the years since the turn of the 21st century as a “period of strategic opportunity.” Through enterprises like the Belt and Road Initiative, they have improved economic and trade cooperation with various countries. And they have used those seemingly benign enterprises to deter confrontation or criticism from trade partners and also as investments for advancing “potential military advantages for China.”

The report noted two key factors working in China’s favor: strong political will and fiscal strength. The Bible forecast thousands of years ago that nations like China would indeed grow in economic power and willpower while nations like the United States would greatly diminish in those critical factors for military success. (See Leviticus 26:16-19 and Deuteronomy 28:43-45.)

China is the world’s second-largest defense spender after the U.S. Analysts expect it to continue increasing its defense budget.

China has “continued to advance an ambitious agenda of military modernization and organizational reforms,” the report said. The current reforms are actually “the most comprehensive restructuring of forces in its history to fundamentally change the way Chinese forces fight.”

For the past 30 years, China’s air force has not been part of its nuclear weapons strategy. The report noted that the Chinese Air Force has now been “reassigned a nuclear mission.” For the first time ever, China now possesses the nuclear “triad”—systems for delivering nuclear strikes by land, sea and air.

In August 1998, Trumpet editor in chief Gerald Flurry asked, “How could anyone fail to see that Taiwan is destined to become a part of mainland China?” The Taiwanese, he said, “are going to be forced into the Chinese mold.” He based his prediction on history and on reports similar to the Pentagon’s. And he also based that forecast on “a more sure word of prophecy” (2 Peter 1:19).

Expect China to continue “to develop and deploy increasingly advanced military capabilities intended to coerce Taiwan, signal Chinese resolve, and gradually improve capabilities for an invasion,” as the Pentagon expects (emphasis added throughout). We can expect it to continue “increasingly undertaking military operations in other countries’ [exclusive economic zones],” not only Taiwan’s, the Philippines’ or Japan’s. We can expect the pla to develop “increasingly sophisticated weapons” and pursue “an increasingly global role.”

This is the trajectory prophesied in the Bible for China. Our article “Why the Trumpet Watches the Rise of China As a Superpower” explains this trend in detail. Read it for a better understanding of the significance of Chinese military developments. Also request a free copy of our booklet Russia and China in Prophecy.