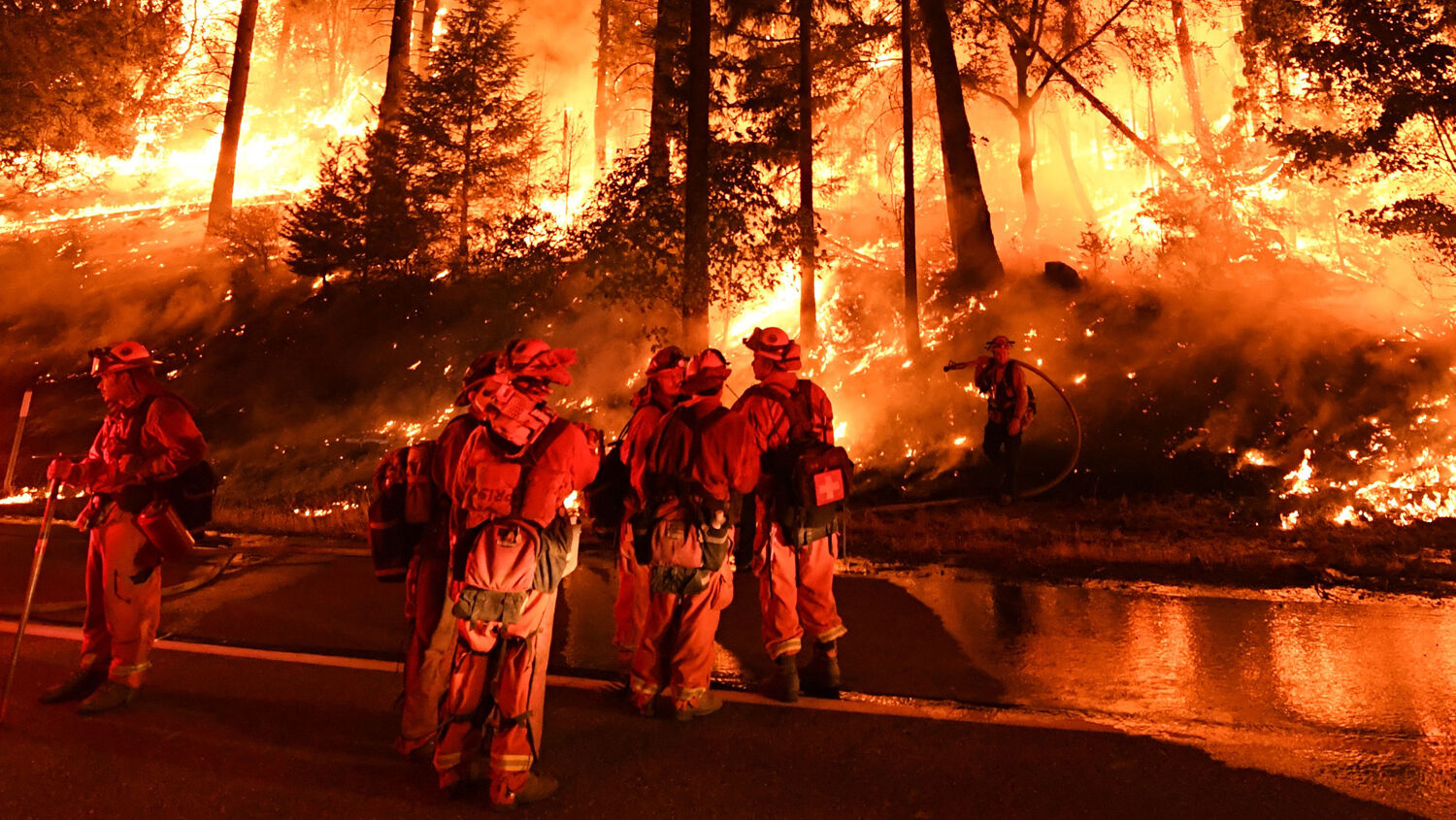 Firefighters try to control a back burn as the Carr Fire continues to spread toward the towns of Douglas City and Lewiston near Redding, California.
MARK RALSTON/AFP/Getty Images

California’s wildfire epidemic continues to worsen. Is this just a random increase in natural disasters? Or is there a purpose?

One of the most destructive fires in California’s history is still blazing. The Carr Fire in Shasta County has destroyed over 1,200 buildings and killed six people.

The Carr Fire started on July 23 and has grown to become 2018’s largest wildfire so far. According to the state’s Department of Forestry and Fire Protection (Cal Fire), the fire was ignited by vehicular mechanical failure. This is just one of dozens of fires raging in the Golden State at the moment.

The Carr Fire is already one of the top 10 most destructive wildfires in California’s history. Within Shasta County, around 110,000 acres have burned already—and firefighters have been able to contain only about a quarter of the fire.

Among those who have been killed by the fire are the wife and great-grandchildren of a local man, Ed Bledsoe. He had been gone from his house for only about 15 minutes when he received a desperate call from his wife. Bledsoe tried to reach his family to save them, but the flames cut off his path. Two men died separately fighting the fire, and another was found dead in his burned home.

Alongside the Carr Fire is the Ferguson Fire, which has burned over 50,000 acres of land since it was sparked on July 13. Dozens of smaller fires are also stretching containment resources thin.

The wildfire crisis in California is rising steadily and dramatically.

The weather is providing favorable conditions for these historical wildfires. This year, California has received 50 percent to 70 percent less rain than normal.

“Wildfires are bigger, burn longer, cause more damage, and kill more people than before,” according to research contributed to by Ray Rasker, the executive director of Headwaters Economics. According to this research, the number of acres burned per fire in California, as well as the length of time these fires burn, has doubled since the 1990s. The time period each year when the Western United States is more prone to wildfires has also increased. In the 1970s, wildfire season was approximately 140 days long. Now, it is about 220 days long.

More and more damage by wildfires is destroying residential areas in the United States as a whole. In the 2000s, the average number of buildings destroyed by wildfires was 2,300 per year. After 2010, the average nearly doubled to 4,300 per year. Such property losses mean increased costs. Insurance losses have risen from an average of millions of dollars per year before 2000 to over $1 billion after the turn of the century. In 2017 alone, insurance losses reached a staggering $17 billion—over 50 percent of these losses in California alone.

Why is there an increase in these natural disasters? Are these California fires really just the random results of the weather? Many people who claim to believe in God are angered, saddened or just plain confused. Why would an all-powerful, all-loving God allow such destruction and suffering? Is He really all-loving? Does He even exist?

Phil Hotsenpiller, a senior pastor of Influence Church, was forced to evacuate his home in 2017 because of a California wildfire. He wrote an article published by Fox News titled “California’s Devastating Wildfires and God,” saying:

Thinking about all of this, I found myself asking, “Where is God?” As a nation, we are facing an increase in lawlessness and what appears to me, an unusual number of natural disasters.

It’s a natural human response to ask questions for things we can’t understand or process. I get it; moral evil can be explained by the free will of man but much of the things we face (cancer, death, hurricanes and fires) are not a result of our free will. So where do I go from here? Either God or nature (which He created) must cause these physical evils. But these things seem incompatible with an all-loving, all-powerful God.

I’m left with what I call a “divine tension.” I affirm the greatness of God and yet, at the same time, wonder as the condition of the world.

He doesn’t have any satisfying answers. But the Bible does have the answer.

Our free booklet Why ‘Natural’ Disasters? explains that the Bible reveals the truth about weather occurrences, natural disasters and God’s hand in it all. This booklet states:

The Bible reveals that God has set spiritual and physical laws in motion, and that He is presently allowing humans to develop their own ways of living—contrary to His laws—and to reap the natural consequences that result from those ways, including weather upsets. To be sure, some of the suffering we experience today is our simply reaping the results of our own mistakes, mismanagement and sin. …

The Bible also shows that God, in His great purpose, permits Satan the devil—the current (and temporary) unseen ruler of this world—to interfere with weather patterns and to have a role in producing catastrophic weather, for man’s ultimate learning (see, for example, Job 1).

But there is an even more important dimension revealed in Scripture that we must recognize: Even during this 6,000 years of mankind, in general, being cut off from its Creator, God is still actively involved in events in order to ensure that they unfold according to His ultimate purposes!

The God of the Bible claims that He controls the weather and natural phenomena! He says He causes the sun to rise on the evil and on the good, and sends rain on the just and on the unjust. He sends the snow and ice as well as drought and heat.

The author of Psalm 148 understood God’s power over the elements. He wrote in verse 8 about “[f]ire, and hail; snow, and vapour; stormy wind fulfilling his word.”

Considering how dependent we are on favorable natural conditions, this is certainly a way that the Power who can create such conditions can demonstrate His benevolence and favor to us. In fact, Scripture is full of promises from God to bless people with good climatic conditions. Open the book and read them for yourself! In Leviticus 26:4-5, for example, He promises a mild climate, seasonal rain and bumper crops. In Deuteronomy 28:11-12 He makes similar promises. …

Look at those promises again! Rain in due season, favorable weather for abundant crops and so on. Looking at our simultaneously parched and flooded lands, seeing our battered farms and wasted crops, shouldn’t we be asking, Where is this God?

God has as much control over natural phenomena today as He did then. In His omnipotence He can stop the elemental forces that so often wreak havoc in our modern world; after all, Jesus Christ stilled a storm with just a few words (Mark 4:39).

But notice again the context of those promises. They come with a condition: “If ye walk in my statutes, and keep my commandments, and do them” (Leviticus 26:3).

This begins to reveal the crucial dimension in this issue that so many people want to ignore.

God promises blessings for obedience and curses for disobedience. Looking honestly at the world—at all the destructive weather phenomena we are plagued with—it is easy to see that we are not receiving God’s blessings, but rather His curses.

As this booklet states, mankind is cut off from God today, and Satan is the temporary god of this world. God is allowing mankind to be punished for its sins to show us that living Satan’s way of life brings heartache and suffering, but God’s way brings joy, happiness and prosperity.

Read our free booklet Why ‘Natural’ Disasters? to understand the true purpose behind the wildfires in California. Soon, once men have learned their lessons, such disasters will be eradicated completely. That is the hope that is clearly revealed in the Bible.