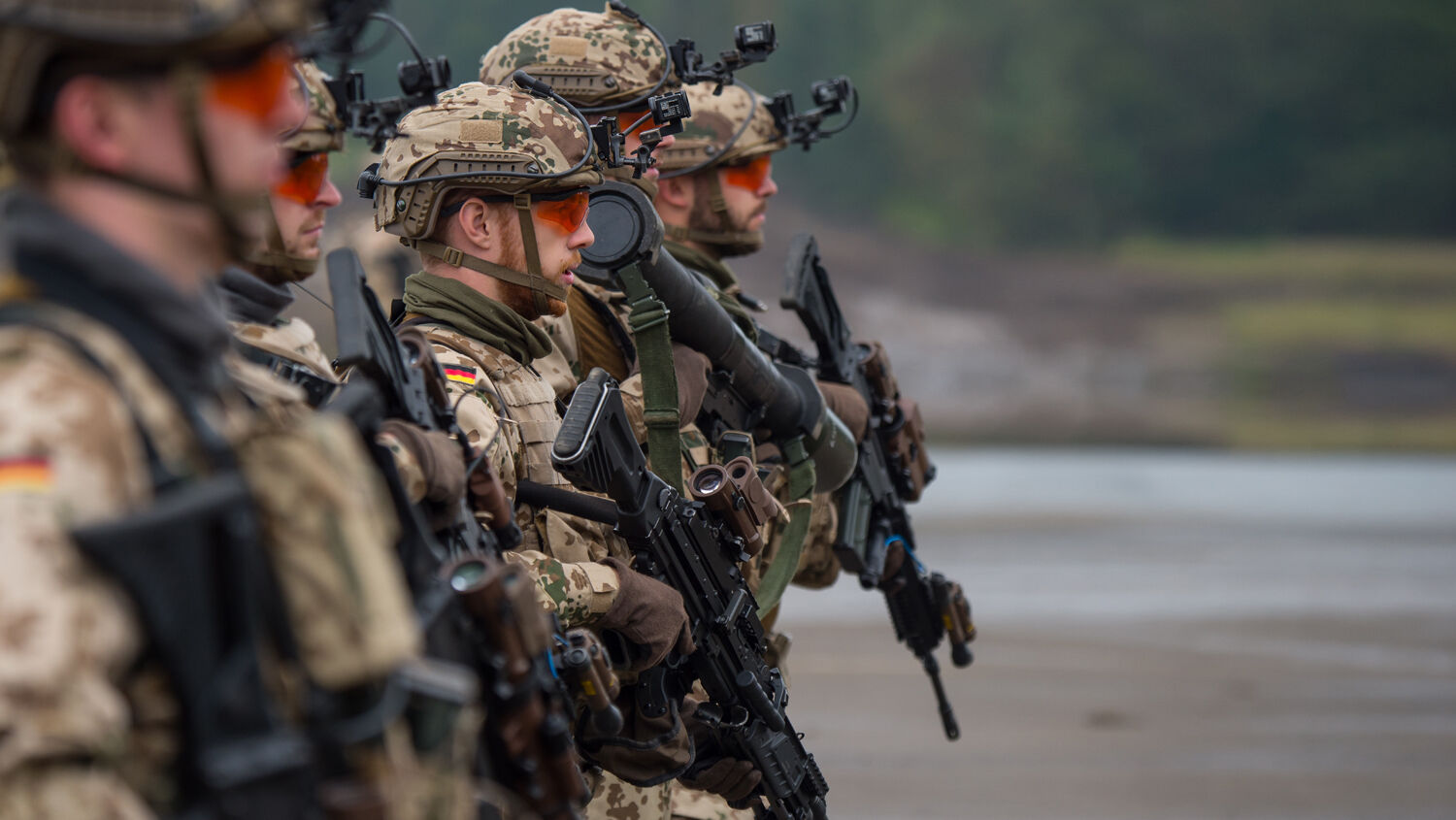 German ‘Bundeswehr’ army soldiers pictured at the training ground during the preparations of the ‘Landoperationen 2017’ military exercise in Munster, Germany,
Philipp Schulze/picture alliance via Getty Images

The U.S. president wants Germany to be the world’s third-largest military spender.

United States President Donald Trump agrees a lot with the Trumpet when it comes to world news. Certainly not always. But consider his recent trip to Europe.

He warned that Germany was too close to Russia. Last year we called that alliance “The Russian Alliance You Really Have to Worry About.” He said that Europe is attacking America on trade. Ten years ago, Trumpet editor in chief Gerald Flurry warned that Europe was waging “a quiet but concerted war on American commerce.” President Trump complains that the U.S. spends billions defending Europe. In the 1950s, Herbert W. Armstrong warned that “in spending unprecedented billions of your dollars and mine—tax dollars—preparing Germany and Europe for defense,” America was making a huge mistake.

A few weeks ago, someone wrote in to ask me why I’m so pro-Trump. This is not about being pro-Trump or anti-Trump. We are saying what we have always said—he just happens to be saying it too.

So there was a lot to like about his Europe trip. But there is also a major danger.

Donald Trump’s Europe trip could be a milestone in making Germany great again, and in turning Germany against America.

Mr. Trump is right that Europe is exploiting America. I wrote about this in my recent article “Europe and America: They’ve Lost That Loving Feeling.”

His solution is radical. Although it doesn’t appear so at first glance.

He wants Germany to beef up its military spending—yesterday.

Germany and every other nato member has committed to spending 2 percent of their economic output each year on their military. Germany has not done that in 25 years. What would the world look like if the Germans suddenly spent $30 billion more on defense to finally meet its obligation?

First, Germany’s position in Europe would change dramatically. It already dominates the Continent, but it is not Europe’s biggest military power. Both France and the United Kingdom spend more.

If everyone in nato spent 2 percent of gross domestic product on defense, Germany would become the undisputed military leader, outspending France by 30 percent. Currently it spends four times more than Poland does. This would jump to seven times Poland’s spending—even if you assume Poland also boosted its spending to the 2 percent level.

“[W]hat would the standoff over Greek debt or the EU’s asylum policies look like if Germany were not just an economic powerhouse but also wielded real military might?” asked the EU Observer last year. “How would it shape the country’s relations with the Czech Republic, which expelled 2.5 million ethnic Germans from the Sudetenland after World War ii? And what about with Poland? [I]f Europeans are to spend more on defense, they need to be careful to do it in a way that does not resuscitate the Continent’s old demons.”

It’s like getting into an argument over money with a hard-muscled hulk, as opposed to, well, someone like me. The words may be exactly the same, but knowing what the hulk could do to you adds menace.

These changes also upset the global order. Germany would emerge as the world’s No. 3 military spender—overtaking Russia. It would be on track to becoming the world’s third-strongest military. Look at what Russia can do, even with a backward economy, because it has a powerful military and a government willing to use it. Germany’s economy is more than twice the size of Russia’s—and much more advanced.

Combined, the EU already outspends the world’s No. 2 military spender, China. (Chinese stats are hard to come by, so I used spending estimates from the Stockholm International Peace Research Institute throughout this article.) If all nato members spent 2 percent of gdp on their military, the EU would be spending $100 billion more than China on its military, every year.

But Mr. Trump did not stop at 2 percent. In an interview with Britain’s Sun newspaper, he said that “all the countries in Europe should pay 4 percent” of their gdp for defense. Officials say that he made similar demands on European leaders in private.

A Europe that spends 4 percent of its economy on defense would be a superpower. At this level, Germany’s defense spending would double Russia’s. The European Union would suddenly rival America as the world’s No. 1 defense spender.

Mr. Trump also said some other things to spur Europe to spend more on defense. He questioned whether America would continue to defend Europe under the nato alliance. He even called Europe a “foe” of America’s.

Again, he’s right. Europe is behaving like a foe in so many ways. But how will Europe respond to this? If it can no longer rely on America to defend it, Europe will have to spend more and build up its own forces.

Mr. Trump also condemned Germany’s relations with Russia. Again, he’s spot on. He called out Germany for its pipeline deal with Russia, just like we have. Some of Germany’s Eastern neighbors refer to the Nord Stream ii natural gas pipeline as the Molotov-Ribbentrop ii pipeline. Russia and Germany divided Eastern Europe between them by signing the Molotov-Ribbentrop Pact just days before Germany invaded Poland and launched World War ii.

But how will the Germans respond to the American president calling them out on these issues and calling Germany a “foe”? They will move yet closer to America’s other foe: Russia.

This isn’t about supporting or opposing President Trump. It’s about world events that will affect everyone. And more importantly, it’s about Bible prophecy.

We base our warnings on the Bible. Donald Trump’s presidency itself ties in to some important Bible prophecies. The Bible also warns of the rise of a rival power of the United States. In some ways, Mr. Trump sees this rise better than any major politician on the scene. He is bold enough to publicly expose Europe’s trade assault against the U.S. and Germany’s alliance with Russia.

But at the same time, he may push this power to rise even faster. To finish off the quote from Mr. Armstrong that I started with:

Yet, in spending unprecedented billions of your dollars and mine—tax dollars—preparing Germany and Europe for defense against the war that isn’t going to come, stupid bungling America is spending its wealth and resources to produce the Frankenstein that is going to turn on us in an offensive war of invasion, and destroy our United States! …

And that’s the real news of today—and tomorrow!

That military development may not come until Europe has new leadership. But Europe will have to become more aggressive militarily simply to survive without American help.

Mr. Armstrong showed in his book The United States and Britain in Prophecy that the Bible reveals Britain and America to be the modern-day descendants of ancient Israel. And biblical prophecy warns that Israel will trust in lovers—foreign allies—that will destroy it.

“All thy lovers have forgotten thee; they seek thee not,” warns God in Jeremiah 30:14.

“They give gifts to all whores: but thou givest thy gifts to all thy lovers, and hirest them, that they may come unto thee on every side for thy whoredom,” God says in Ezekiel 16:33. Could this apply better to any nation other than the modern United States? America has built and protected Europe for decades, even providing it with some of the most powerful weapons ever created.

The Bible prophesies that these lovers will ultimately turn on the U.S. This is why pushing Germany to become the world’s No. 3 military spender is dangerous.

God says He uses these lovers to punish Britain and America (Jeremiah 30:14; Ezekiel 16:37). These countries have no idea that their lovers will turn against them. Their defense strategies suppose the worst threat to be China or Russia. But the Bible warns that their “lovers” in Europe will strike the fatal blow. And it will happen according to a definite plan. To learn more about this plan, and what the Bible says about Britain and America, read our free book The United States and Britain in Prophecy.