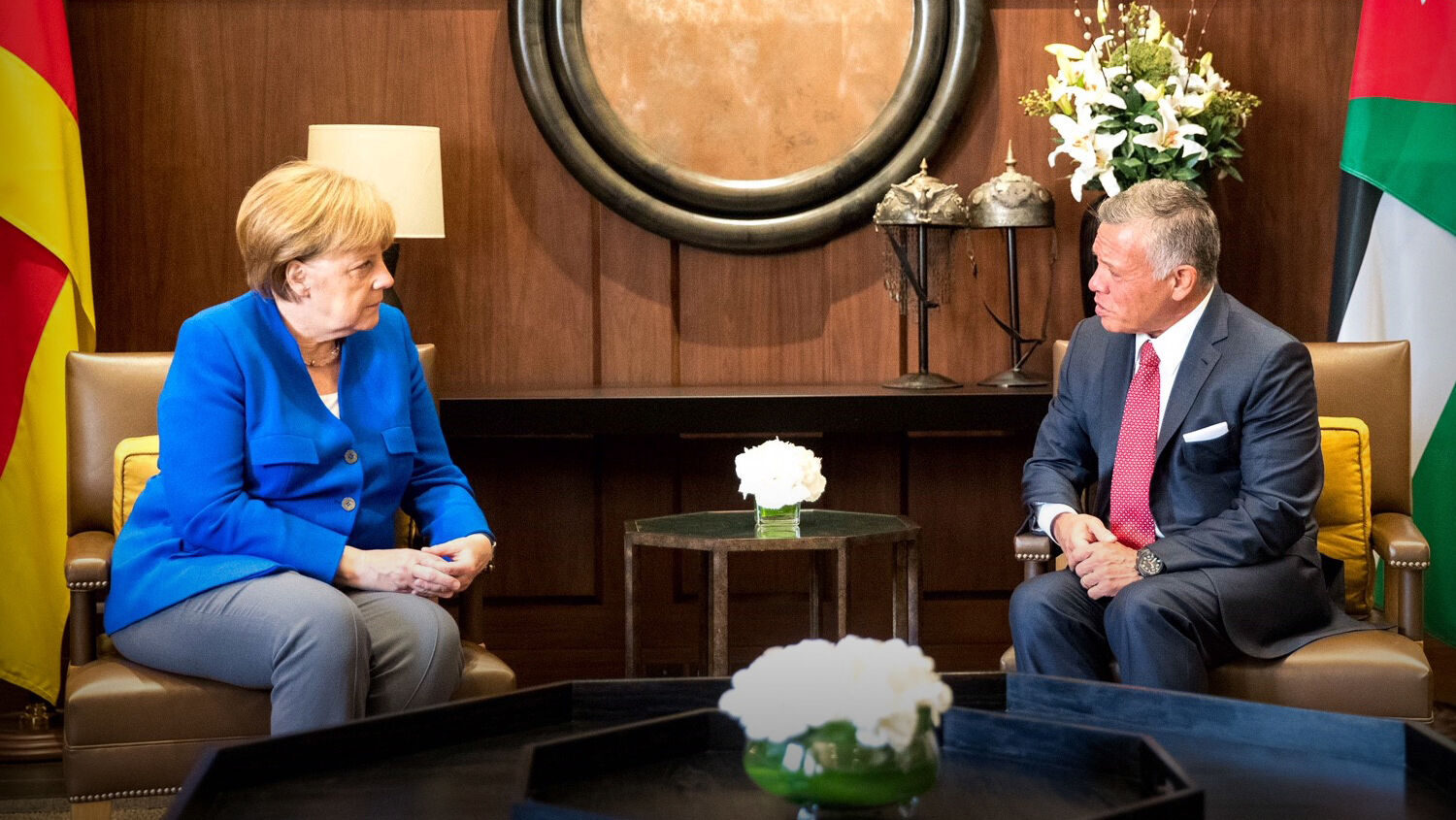 On a visit to Amman, the German chancellor confirms support for Jordan in the face of Iranian aggression.

Merkel made the pointed remarks during a joint press conference with Jordan’s King Abdullah ii, while visiting Amman to confer on Jordan a €100 million (us$117 million) loan.

After the United States, Germany is the second-largest foreign donor to the Middle East nation, providing over $1.2 billion of aid since the beginning of the Syrian civil war in 2012.

More than the large cash infusion, however, it was Merkel’s comments concerning Iran that captured attention.

“Of course we have very much in common when it comes to the question of [Iran’s] ballistic missile program,” Merkel stated. “When it comes to its presence in Syria and the war in Yemen—that is where Iran’s aggressive tendencies should not only be discussed, but where we also urgently need solutions.”

Generally reticent to call out Iran for its numerous acts of aggression, Merkel decided to forgo the usual diplomatic talk and pin the blame for Jordan’s humanitarian crisis squarely on the Tehran regime.

Merkel is currently trying to escape her own refugee crisis back home. Her place as Germany’s chancellor is in jeopardy as her Bavarian coalition partner is threatening to break up the decades-old alliance if she doesn’t change her refugee policy—a policy that saw over 1 million migrants enter Germany in 2015.

Jordan currently houses more than half a million Syrian refugees inside its borders, a tide of humanity that is trying to escape the civil war in Syria, which is north of Jordan. While Merkel was in Jordan, an aggressive military offensive by Syria’s Assad regime began in Dara province, just across the border from Jordan, threatening to send more refugees southward.

The same day that Merkel spoke with King Abdullah, Jordanian tanks were spotted being transported to the north of the country in order to deal with any potential spillover from the fighting.

Merkel also addressed these concerns over Iran’s activity in southwestern Syria, which rubs up against Israel and Jordan. “You live not just with the Syrian conflict, but also we see Iran’s activities with regard to Israel’s security and with regard to Jordan’s border,” she said.

Like Israel, Jordan is concerned that Iran would use the Syrian civil war as an excuse to set up bases on its borders. It managed to set up a “deconfliction zone” in the area in a deal worked out with the United States and Russia. However, as of this week, this same area is experiencing heavy fighting and an aerial assault by the Syrian regime and the Russians.

It is under these pressing circumstances that Germany’s chancellor is looking for urgent solutions.

While it would likely take a much more direct assault by Iran to motivate German military intervention in the region, Berlin has been using the last few years to ramp up its military support for the Gulf states and Jordan, the direct adversaries of Iran.

Jordan has long feared Iranian interference in the region. As far back as 2004, King Abdullah warned the U.S. that Iran had a view to establish a “Shiite crescent” extending from Lebanon on the Mediterranean coast eastward through Syria, Iraq and into Iran. As Courcy’s Intelligence Review stated at the time, “What is startling is the degree of fear of Iran that has revealed itself in Jordan.” A decade and a half later, what the king feared is reality.

The king is voicing the same alarm to Germany. Merkel’s response seems to indicate that Germany’s attitude toward Iran may be hardening.

While Germany has traditionally pushed back at Iran through arms sales to Iran’s enemies, Bible prophecy states that in the near future Germany’s response will be much more robust. Merkel’s comments are indicative of this coming change in response.

Based on prophecies found in Daniel 11 and Psalm 83, we can know that the nation of Germany will ally with Jordan, and that they will work together to forcibly put down Iran’s pushy foreign policy.

As we have noted, the seeds for a more robust military partnership are already present in the German-Jordanian relationship. Although it is possible that Germany will react to Iranian aggression under Merkel’s leadership, we fully expect an imminent change in the German leadership.

If you want to understand more of our analysis regarding the Iranian and German clash, as well as the alliance Germany is now forming with the Arab states, please read two of our Trend articles “Iran and Europe Heading for a Clash of Civilizations” and “An Alliance Between Arab Nations and Europe.”