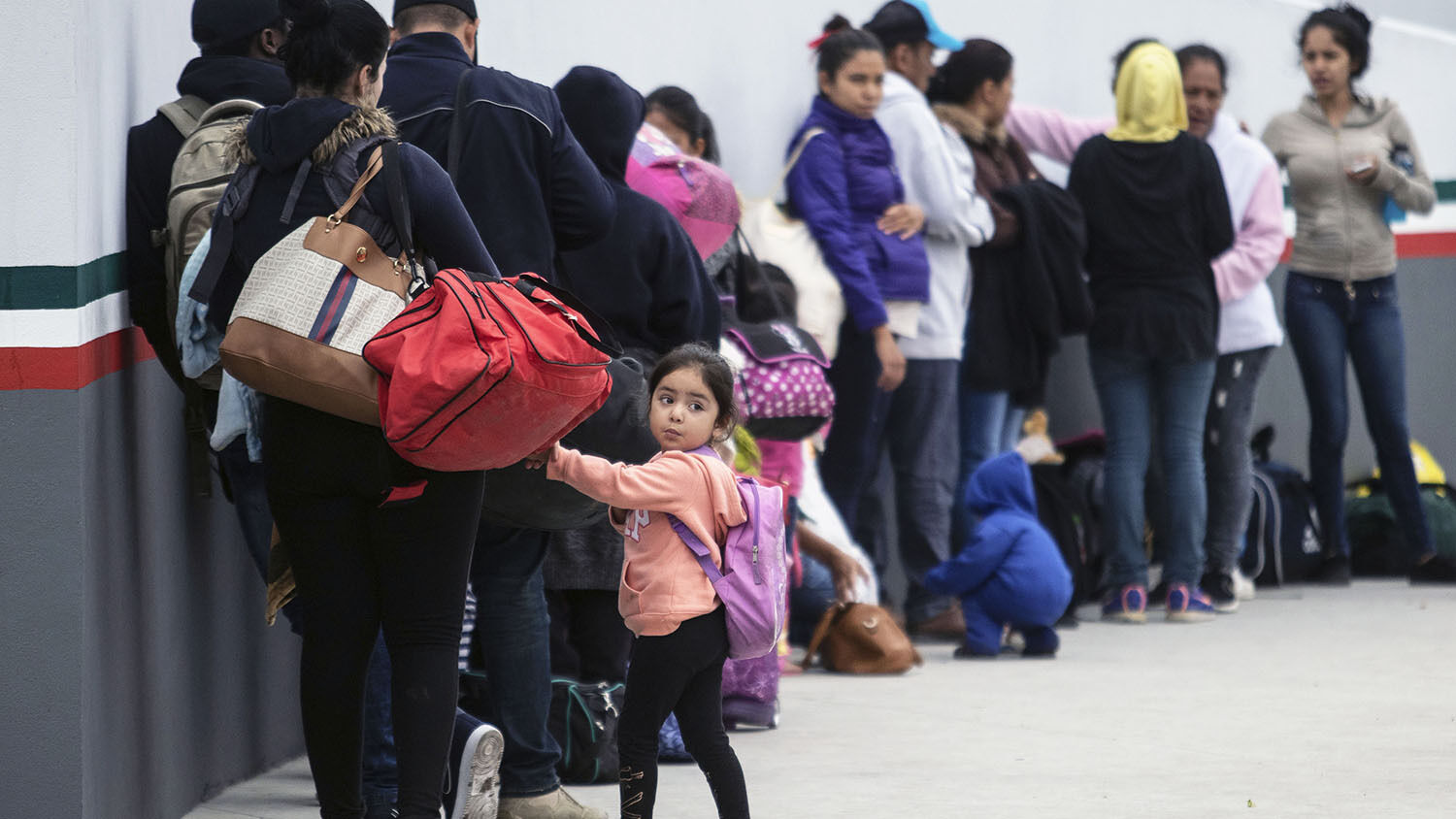 Migrants line up at El Chaparral port of entry in Tijuana, Mexico, on the border with the United States on June 21.
GUILLERMO ARIAS/AFP/Getty Images

President Trump wants to keep families together—but it is not so easy.

United States President Donald Trump signed an executive order on June 20 that will allow families crossing the U.S.-Mexican border to stay together. The flip side is that this will allow families to be held in detention indefinitely while the illegal immigrants are prosecuted for entering the country illegally.

This order is meant to correct the issue of family separation. Due to the Flores settlement agreement, a court ruling made in 1997, unaccompanied minors who crossed the border illegally are prohibited from being detained for an extended period of time. A Ninth Circuit ruling in 2015 expanded upon the Flores settlement, ruling that unaccompanied and accompanied children and minors who cross the border illegally are not allowed to be held by the government for more than 20 days. This creates a problem, as adults who enter illegally must still be prosecuted, which can take much longer than 20 days. Thus, children are forced to be taken from their parents because the law does not allow them to remain in custody, even though their parents can’t be released.

President Trump’s executive order, titled “Affording Congress an Opportunity to Address Family Separation,” provides an opportunity, as the name implies, for Congress to pass legislation that will essentially do away with the Flores agreement. If Congress does not act, the Supreme Court can revoke the executive action, because it goes against the 1997 court ruling.

Both sides of the political spectrum have criticized the actions of the United States Border Patrol and the U.S. Immigrations and Customs Enforcement (ice), and blamed President Trump specifically, for the separation of families.

Time magazine released a controversial cover featuring a 2-year-old Honduran girl crying and a cutout of President Trump stares down at her. Besides being provocative, this cover is misleading—the young girl was never even separated from her mother.

“The administration’s current family separation policy is an affront to the decency of the American people, and contrary to principles and values upon which our nation was founded,” said Sen. John McCain

Despite these claims, the Trump administration never wanted to separate families. When people illegally enter the country, they are committing a crime and must be prosecuted—even if they have children. The Flores agreement ruling means children cannot be detained with their parents. As Homeland Security Secretary Kirstjen Nielsen said, “We [the Trump Administration] do not have a policy of separating families at the border.”

So why did they? Because that was the only way to prosecute the criminals who entered the country illegally.

“Children and parents get separated every day across this country when a parent is charged with a criminal offense,” said Thomas Homan, the acting director of ice. “It’s sad to see children cry when you take a parent out of a home, but because it’s sad, doesn’t mean that we ignore the law.”

It is the policy of this administration to rigorously enforce our immigration laws. Under our laws, the only legal way for an alien to enter this country is at a designated port of entry at an appropriate time. When an alien enters or attempts to enter the country anywhere else, that alien has committed at least the crime of improper entry and is subject to a fine or imprisonment under section 1325(a) of title 8, United States Code. … It is also the policy of this administration to maintain family unity, including by detaining alien families together where appropriate and consistent with law and available resources.

President Trump said in a June 15 press conference, “I hate to see separation of parents and children.”

The separation of families is a terrible thing. Children being taken from their parents is something that should never have to happen. But there is a much larger problem here than many realize.

Before President Trump signed his executive order, he was criticized for taking children away from their parents. Now that he has done something to reverse that, he is ridiculed for not doing enough and for issuing a confusing order.

The left is completely hypocritical in its treatment of President Trump. When former President Barack Obama did the same things in 2014, there was no similar outburst. This indicates that those who claim to be outraged and are emotional about keeping families together are not concerned about families, they are concerned about politics.

[T]he media uproar over these children is not a sympathetic reaction—it is part of an agenda. Leftists in the media, entertainment and politics are not as concerned as you might think about children staying in special facilities for a few weeks. If they were, they would have set off an uproar during the Obama administration, when some of the exact same things were taking place. In fact, former Obama speechwriter Jon Favreau widely circulated an image of detained immigrants sleeping on the floor which sparked outrage from leftists. What they and Favreau didn’t realize is that the image was from 2014, right in the middle of Obama’s second term.

This fiasco is one example of the hypocrisy that our nation is now immersed in. This hypocrisy is part of a war being waged within the United States. It is an ideological war, and its purpose is to destroy the few remaining principles in our society that allowed America to become a great nation.

President Trump is on a campaign to save America, to make America great again. And he is winning some major battles. But his success will only be temporary, as Trumpet editor in chief Gerald Flurry explained in his article “Saving America From the Radical Left—Temporarily.” The true enemy bringing down America is not physical; it is a spiritual evil!

What President Trump is doing, such as his actions to mend the immigration crisis, will only slow America’s descent. For more detail about this war within the United States, request Mr. Flurry’s free booklet America Under Attack.