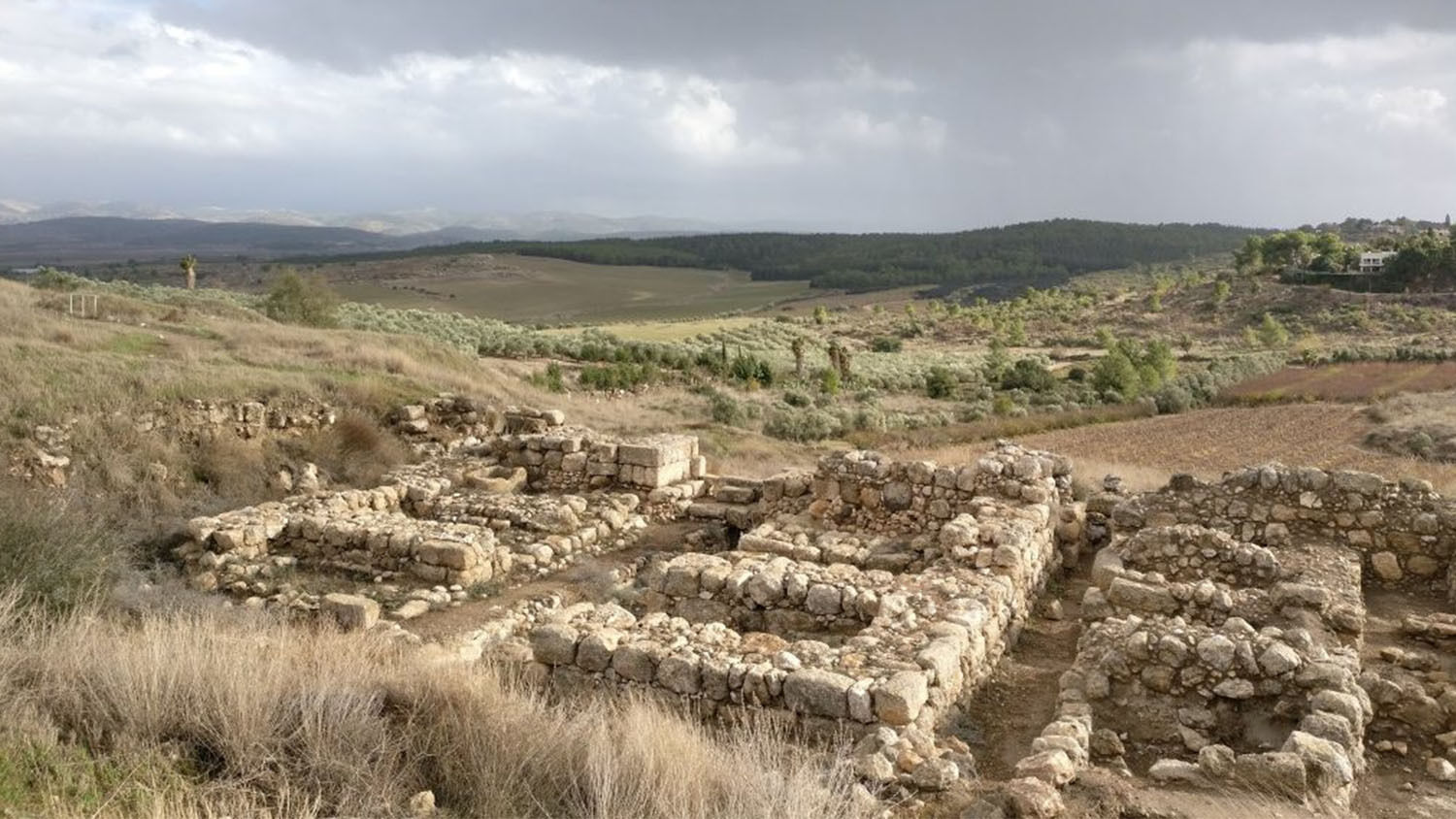 View of the “Solomonic Gate” from inside the city of Gezer, looking toward Jerusalem.
Watch Jerusalem

jerusalem
Last month, Cornell University released a provocative paper innocuously titled “Fluctuating Radiocarbon Offsets Observed in the Southern Levant and Implications for Archaeological Chronological Debates.” Don’t let the mundane title or topic fool you; the paper had some stinging potential conclusions that would undermine the archaeological discoveries that historically have supported the biblical narrative—specifically the period related to the greatest kings of Israel, David and Solomon.

Here is why (and please bear with me).

Historically, and still so today, the most important tool for archaeologists in assigning a date to a layer is pottery. The fact that the humble pottery vessel changes over time and is found everywhere over the ancient world makes it the perfect candidate for determining the date of a layer. By knowing the age of each of the different styles of pottery, archaeologists are able to deduce the age of the layers. And if you can date the layers, you have a good idea of the other artifacts found within that strata and, by process of deduction, the walls or buildings associated with those layers.

Instead of describing the biblical personality associated with those types, or even a specific date, the changing pottery types are classified into ages: the Bronze Age, Iron Age, etc. Traditionally, archaeologists have believed that the beginning of David’s reign marks the start of the archaeological period called Iron IIA. This period covers a massive increase in building throughout Israel. Traditionally, this building program was associated with David and Solomon.

But in the past two decades, a hypothesis known as low chronology was developed whereby the pottery styles that were associated with the start of Iron IIA (as well as the monumental building program) no longer belonged to David or Solomon, but rather to later kings. Proponents of this view said that David and Solomon belonged to the simpler, far less-advanced civilization of Iron I, a period normally associated with the judges—and with decentralized, weak, unimpressive Israelite trade, institutions, government and construction.

Essentially, believers of low chronology disagree fundamentally with the Bible’s description of the kingdom of David and Solomon.

Just as the low chronology camp was gathering more disciples, however, evidence of more monumental buildings was unearthed. These were dated increasingly through the use of carbon dating (also known as Carbon 14 dating) rather than just pottery analysis.

Excavations under the direction of Prof. Josef Garfinkel at Khirbet Qeiyafa, a site located on the border of ancient Israelite territory against Philistine land, yielded remains of a hefty city wall, gates and a large public building. A series of carbon samples were taken from within early Iron IIA strata. These samples date at the latest to 969 b.c., a date associated by all archaeologists to the time around King David’s death.

Around the same time, Dr. Eilat Mazar of Hebrew University was excavating in the northern part of the City of David in Jerusalem. She discovered a massive structure with associated Iron IIA pottery, and again, she found numerous carbon samples to support the traditional dating to King David’s time.

Earlier this year, excavations at Tel Eton on the outskirts of Beersheva revealed more carbon samples that dated a massive Israelite house to the very time period of King David.

At these three excavations carbon samples, and not just pottery, were used to accurately date the large structures to dates associated with the United Monarchy, before the nation of Israel split in two.

Just as low chronology stated that the pottery associated with David and Solomon was off-track, Cornell is now going after the carbon samples, saying that they can no longer be trusted.

Using data collected from tree rings in the Southern Levant from the past 400 years, the Cornell study argues that the standard calibration curve for Carbon 14 is off by about 20 years, and that carbon samples taken in the holy land should be calibrated by a separate system. From their data set, they deduce that the dates associated to the carbon samples in this region are, on average, about 20 years younger.

Just as low chronology stated that the pottery associated with David and Solomon was off-track, Cornell is now going after the carbon samples, saying that they can no longer be trusted.

Thus, the latest Khirbet Qeiyafa sample is not from 969 b.c., but rather from 20 years (or more) later.

Twenty years doesn’t seem to be a lot; it still puts that sample inside the dates of the United Monarchy. However, the contention that all future and past carbon samples are 20 years too old will further muddy the waters in terms of using carbon samples to accurately date discoveries.

Where carbon samples could be used as good evidence for dating, now, at least to Cornell, we really can’t be sure.

Reading through the Cornell paper, it becomes obvious that for scientists, they haven’t tried very hard to hide their bias.

The data collected is wonderful and seems to be accurate, but conclusions are hastily extrapolated back to biblical times from a very limited data set.

For example, the study itself was conducted by a study of tree rings from the Southern Levant that go back only 400 years. In that time period, they do see variations that indicate that the traditional dates were off by an average of 19 years, but in many cases, only as much as five years. Furthermore, they deduce, that possibly, warmer weather tends to make samples appear older than colder weather. Then, they deduce that since it seems that it was warmer during 1200–600 b.c., we should assume that the dates for the biblical period are likely younger as well.

It seems the authors are in part aware of just how much they are guessing by extrapolating the findings back to biblical times when they write sentences like this (emphasis added throughout):

Where such calibration time series are not yet available (namely, before a.d. 1610 for the Southern Levant case at present), our data set better indicates the circumstances under which a likely potential range of error may apply for earlier periods—assuming that similar conditions and processes apply in earlier periods and accepting some possible variations—rather than offering any specific average correction factor.

They even realize that they might not even know if it was warmer during the biblical period:

Available paleoclimatic data for the Southern Levant for the earlier Iron Age are inconclusive, but, after indications of cooler and arid conditions in the period around the close or the Late Bronze Age through initial Iron Age, there are some (though not always consistent) suggestions of wetter and/or warming conditions in the Eastern Mediterranean region.

Based on just the above two quotes, the study could have been summarized this way:

Based on tree ring data from the past 400 years, and that we think it might possibly have been warmer in the Iron Age than at other times, we believe that the carbon samples from 3,000 years ago may possibly be, on average, 20 years younger than previously thought.

I’m not a scientist, but it seems to me there is a lot of guesswork going on here. So much guesswork that it is borderline dishonest, and definitely premature, to even bring up how this data set affects carbon dating from the biblical period.

Still, Cornell decides to frame its whole discussion, including the title and abstract, around how this might “potentially undermine” the traditional position in the chronological debate regarding David and Solomon. And then, when it is reported in the press, editors take the study and run with it stating, “Cornell University professor shows how archaeologists’ data could be skewed by decades—potentially disproving the narrative of David and Solomon’s United Monarchy.”

Potentially yes, but looking at the actual study itself, probably not!

Nevertheless, simply muddying the waters with hasty extrapolations damages both sides of the argument, whether for low chronology or traditional dating. It promulgates the notion that we can never know one way or the other. Furthermore, it sows unnecessary doubt in the minds of the unsuspecting who do not have the time to read the study itself.

If you would like to educate yourself on what exactly has been found so far in the field of biblical archaeology, spend some time on our sister site watchjerusalem.co.il. Click on the archaeology tab and read a few articles or watch some of the videos. You can also click on the exhibit tab and read about some of the latest biblical artifacts that have been unearthed in Jerusalem, now on display at our headquarters in Edmond, Oklahoma. Furthermore, for those with open minds, be sure to request our free booklet The Proof of the Bible.