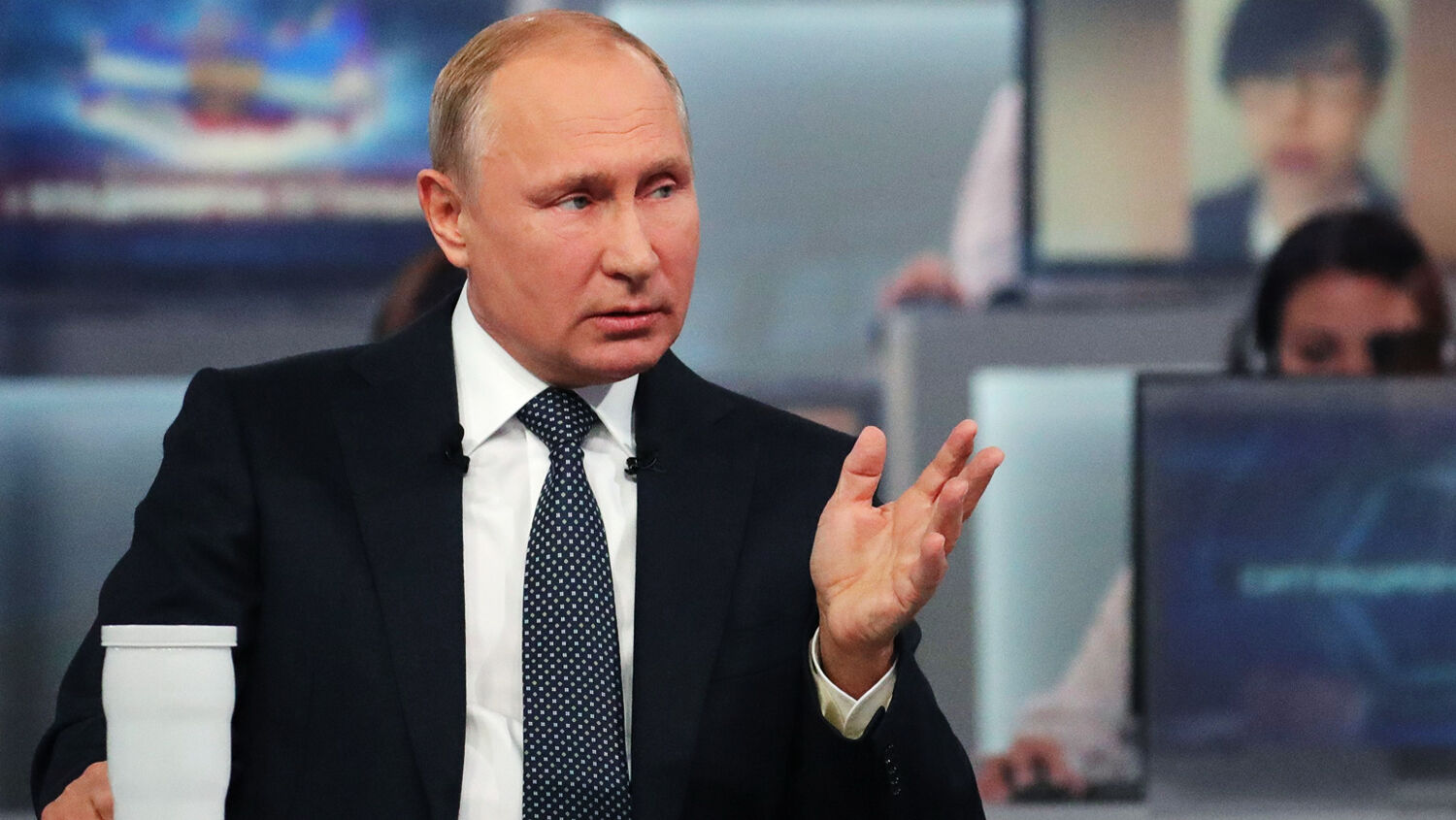 Russian President Vladimir Putin warned on Thursday that a third world war would lead to the “end of civilization.”

The statement came during the annual “Direct Line With Vladimir Putin” television program, in which the president fields questions from journalists and citizens from all around Russia.

After being asked if a third global war will break out, Putin quoted Albert Einstein, saying: “I know not with what weapons World War iii will be fought, but World War iv will be fought with sticks and stones.”

Putin added: “The realization that a third world war could bring the end of civilization should deter us from taking dangerous steps globally.”

He continued: “We’ve been living in a period of relative peace following the Second World War. We know that there are regional conflicts out there. … But we’ve never had any global conflicts since then. Why? Because global military power has established a strategic parity. And you might find my words inappropriate, but it’s true: The fear that each country has instills respect in their opponents.”

But Putin then said current trends are threatening to bring an end to the relative peace the world has experienced since World War ii.

Many analysts agree with the view that nuclear arsenals have, ironically enough, brought mankind into an era of relative peace. As American astronomer Carl Sagan described it: “The nuclear arms race is like two sworn enemies standing waist-deep in gasoline, one with three matches, the other with five.” In a major nuclear war, no one wins. The idea of being the first country to “drop a match in the gasoline” is irrational. As Putin said, fear has restrained the nuclear powers from confronting each other.

But the problem is that human beings are not always rational, particularly in wartime.

For this reason, Herbert W. Armstrong, whom world leaders often labeled an unofficial ambassador for world peace, explained that faith placed in nuclear deterrence is faith misplaced. On the March 12, 1981 World Tomorrow television program, he said:

There is no guarantee that an instance of wartime desperation would not compel a man commanding a nuclear arsenal to press the button. Mankind’s war-torn history shows that when war breaks out, men ultimately do not sit on their most potent weapons. They use them.

And Bible prophecy indicates that nuclear weapons will be used in great numbers during a third world war.

As they sat on the Mount of Olives in Jerusalem some 2,000 years ago, the disciples of Jesus Christ asked Him: “Tell us, when shall these things be? and what shall be the sign of thy coming, and of the end of the world?” (Matthew 24:3).

“World” in this passage is a translation of the Greek word aion, which has a variety of meanings. In this context, it means “epoch” or “age.” The disciples were asking about the end of the age of mankind ruling over himself. This age is what Putin referred to as “civilization” in his comments.

The disciples wanted to know when man’s civilization would end and when the age of Christ ruling over humanity would begin. They asked Him what events would lead up to that momentous transition.

Jesus gave them a detailed answer.

He explained that prior to His return, religious deception would victimize many (verses 4-5). He also said people would learn of “wars and rumors of wars,” fierce international tensions, and “famines, and pestilences, and earthquakes” (verses 6-7). These are all early-warning indicators, but they do not mean the end of the age of man is imminent. Christ said, “[A]ll these things must come to pass, but the end is not yet.”

In verses 21-22, Christ speaks of an event to occur which does mean the end of the age of man is imminent—and that His return is at the door: “For there will be greater anguish than at any time since the world began. And it will never be so great again. In fact, unless that time of calamity is shortened, not a single person will survive …” (New Living Translation).

At the time that Christ spoke those words upon the Mount of Olives, a global war that could threaten to kill every “single person” was not yet technologically possible.

But today—during this age of proliferation of nuclear weaponry—a war capable of extinguishing all human life from the planet is not only possible but dangerously probable. “Mankind has never been in this position before,” British Prime Minister Winston Churchill said after World War ii. “Without having improved appreciably in virtue or enjoying wiser guidance, it has got into its hands, for the first time, the tools by which it can unfailingly accomplish its own extermination.”

Only in the modern era has mankind had the ability to exterminate himself. This shows that many key Bible prophecies about World War iii could only be possible in the modern nuclear age. The time of unprecedented destruction prophesied in Matthew 24:21-22 refers to what we would now call World War iii.

Yet as we see that global conflict approach, there is cause for profound hope! In Matthew 24, Christ says that the world war at the end of this age will be so devastating that it could kill all human life. But He then adds a key detail in verse 22: “But it will be shortened” (nlt).

World War iii will be interrupted! Before mankind detonates enough weapons to entirely annihilate itself, Jesus Christ will interrupt the war. Immediately after that time of unprecedented destruction, He will usher in a new epoch of unprecedented peace.

In his booklet Nuclear Armageddon Is ‘At the Door,’ Trumpet editor in chief Gerald Flurry writes about how near this age of peace is: “Christ’s return is ‘at the very door.’ He really is coming back, and He will rule this world and show people, through a great turning point in the history of man, how to be successful and build a paradise on Earth.”

Understanding how near we are to that radiant future can give us perspective that fills us with deep hope. For more about the growing threat of World War iii and the enduring peace that will follow immediately after it, read Nuclear Armageddon Is ‘At the Door.’