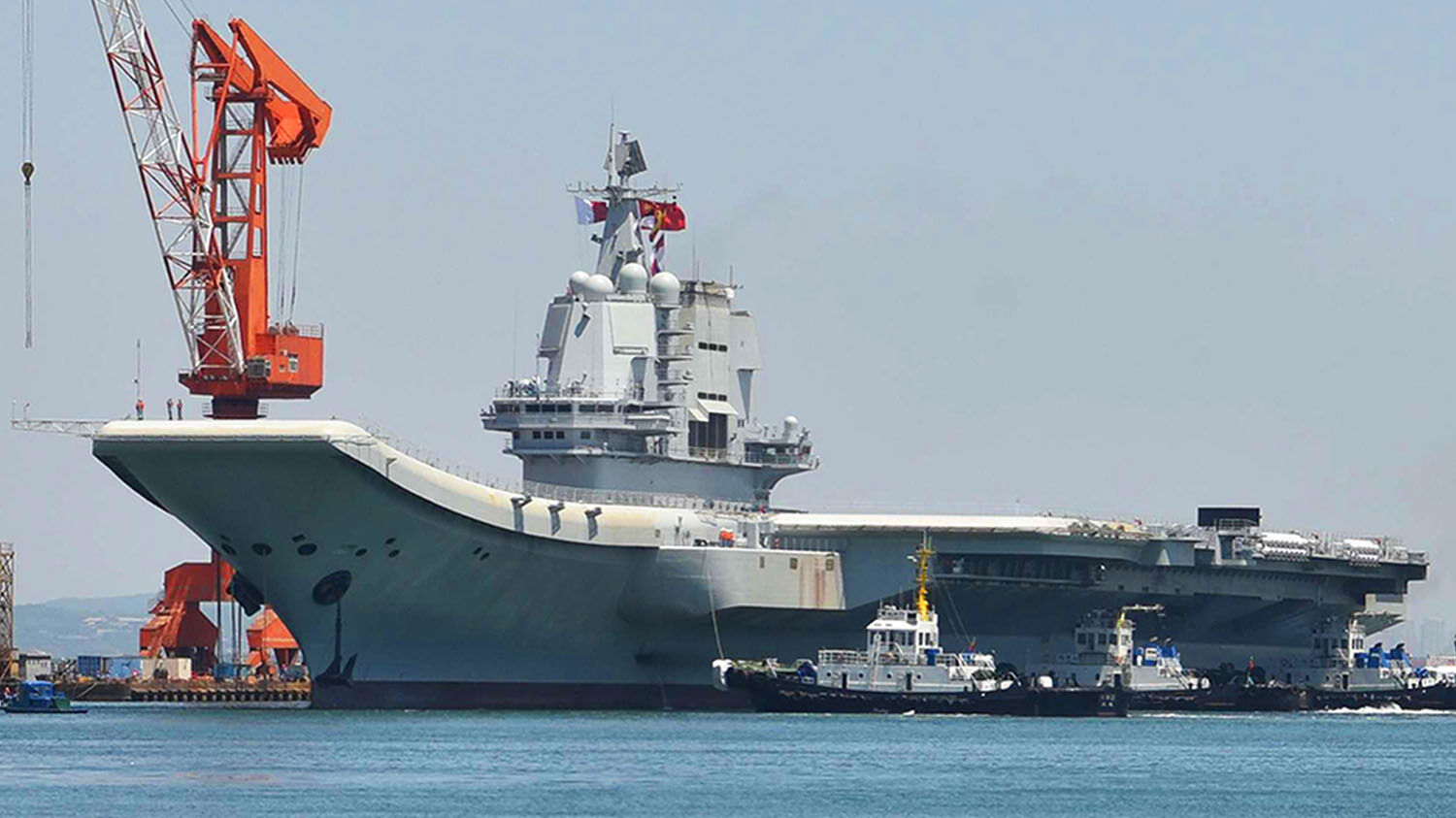 China’s second aircraft carrier, Type 001A, arrives at Dalian Shipyard after conducting its first sea trials on May 18.
Wang Xizeng/VCG via Getty Images

From aircraft carriers and stealth fighters to hypersonic missiles and space weapons, the Chinese military is advancing quickly.

China’s first homemade aircraft carrier, temporarily named the Type 001A, set sail from its shipyard in northeastern Dalian early Sunday, May 13, to begin its first set of sea trials. Also this month, China’s J-20 stealth jets began their first maritime combat training sessions. These, along with other developments, show that China is continuing to build up militarily—on sea, land, air and even in space.

The Type 001A aircraft carrier was first launched in a lavish ceremony just over a year ago and was hailed as the most powerful symbol of China’s rising military might.

The Type 001A, which took only a couple of years to build, is an upgrade from the Liaoning, China’s first aircraft carrier launched back in 2012. The Liaoning took 13 years to develop and is a repurposed Soviet-era vessel purchased from Ukraine. Not only does the Type 001A vessel build off the Liaoning, but Chinese engineers also studied some of America’s advanced military technology, according to naval experts. The Type 001A is around 65,000 tons, has advanced radar systems, and can carry 32 aircraft, compared to the Liaoning’s 24.

The vessel will require several more sea trials to test its most basic functions before it can be handed over to the People’s Liberation Army Navy for military trials, which won’t be till early next year.

Once it enters commission, it will enhance China’s ability to project its power in the disputed territory of the South China Sea. China’s ambition to build a world-class navy with blue water capability is no secret, and the Type 001A is a big step forward in that direction.

The successful development of a homemade carrier means China now has the capability and experience to produce more vessels of even higher quality.

Chairman of the China Shipbuilding Industry Corp. Hu Wenming said, “In the future, if the country wants to develop any type of aircraft carrier, we have the capability to do it.”

This vessel, known as the CV-18, will incorporate an electromagnetic aircraft launch system, increasing the longevity of the aircraft and enabling quicker launches—an improvement over the ski-jump systems of the previous two carriers.

In addition to the carriers, it’s been predicted that China could produce approximately three destroyers per year up until 2030. The nation is also working on producing silent nuclear submarines and introducing their Type 075-class amphibious, helicopter assault ships.

China’s navy is increasing so rapidly that it’s estimated that by 2030 it will be almost double the size of America’s active navy. According to Robert Ross, a Boston College professor of political science, China’s naval vessels increased from 210 to 320 ships between 2010 and 2017.

In his testimony on China’s Worldwide Military Expansion submitted to the House Intelligence Committee on May 17, former Navy intelligence officer James Fanell said:

In the past, it was logical to say that America’s advanced military technology would make up for a lack in numbers. But “it is no longer credible to make that argument,” said Fanell. “From a technological standpoint, the prc [People’s Republic of China] has quickly achieved parity with U.S. Navy standards and capacities for warship and submarine production.”

Fanell said that the bottom line is “America needs to get back to being a maritime power, supported militarily by strong allies, something that has been sorely neglected since the fall of the ussr. … We have already slipped. If we fall any further, we may not recover.”

In the pursuit of sea dominance, reports from U.S. intelligence earlier this month also revealed that China has continued to militarize the South China Sea. According to reports, the Chinese military fortified three more artificial islands with advanced antiship and anti-aircraft missiles during its recent military drills in the area. Some experts have called the islands, which are capable of hosting military aircraft, “unsinkable aircraft carriers.”

Not only has China been advancing militarily on land and sea, but also in the sky. The J-20A fighter jet conducted its first maritime sea combat trials this month, having been in service for just over a year. This is just one of many exercises that demonstrate the combat readiness of the J-20A. The fighter is China’s most advanced, domestically built aircraft, specifically designed for long-range missions.

It has been estimated that there are currently six to 13 J-20As in active service, with three new J-20As being produced every month. The pla Air Force (plaaf) aims to have more than 100 in operation by the end of the 2020.

Aside from America, China is the first country to produce a fifth-generation combat aircraft. Its American counterpart is the U.S. F-22 Raptor, which has been struggling to have its capabilities upgraded since the program officially ended in 2011. Meanwhile, the J-20 has continued to improve in performance, leading some in the West to worry that it may not be long before it surpasses its American counterpart.

The J-20A will also increase China’s ability to deter hostile aircraft and warships from entering the South China Sea, which it claims to own. The J-20A is equipped with long-range air-to-air missiles, meaning it can destroy U.S. aircraft from distances beyond their range of retaliation. This could pose challenges for any American naval or air force missions conducted in the region.

The plaaf also has plans to develop a new long-range, nuclear-capable bomber.

However, China’s vision for military supremacy goes far beyond the confines of Earth, reaching also into space. Chinese military expert Rick Fisher warned that China is developing space-based systems capable of taking out enemy satellites. His warning is supported by Chinese engineers’ publication of a 2017 paper revealing how to build a weaponized satellite capable of taking out enemy satellites in low-Earth orbit.

One of China’s first courses of action, should war break out, Fisher said, would be to take out enemy assets in space. If funding goes according to plan, the satellite could be in orbit by 2023. If successfully employed, it would seriously threaten U.S. military capabilities during future conflicts.

“[D]estroying or capturing satellites and other sensors will deprive an opponent of initiative on the battlefield and [make it difficult] for them to bring their precision-guided weapons into full play,” stated a pla analysis of U.S. military operations.

A congressionally sponsored report on China’s Advanced Weapons Systems dated May 12 reveals yet more ways China is trying to gain military superiority over the United States. The report shows China is currently working on plans to use the moon as a military base as well as develop anti-satellite missiles, hypersonic missiles, lasers, high-speed rail guns, artificial intelligence technology, cyberweapons and a hyper-spectra imaging satellite.

“The United States has a small window, only a decade at most, to develop new capabilities and concepts for countering the cascading disruption of China’s advanced weapons programs,” the report says.

Rick Fisher also warns that the United States only has “about a decade” to counter China, and says that America has failed for years to properly assess the seriousness of the growing Chinese threat.

Late educator Herbert W. Armstrong warned as far back as 1959—almost 60 years ago!—that China would be a threat to the world order. China today has nearly achieved its dream of becoming a world superpower.

In order for China to achieve its dream, Trumpet editor in chief Gerald Flurry writes in his book Ezekiel: The End-Time Prophet, “Europe and Asia may work together to economically besiege America.”

Your Bible prophesies in Isaiah 22 and 23 of a coming “mart of nations” (Isaiah 23:3)—a temporary alliance involving both European and Asian nations. This alliance will dominate global trade for a short period of time, at America’s expense. China, also known as Chittim in your Bible, will play a major role in this economic alliance. If you would like to learn more about who Chittim is today, read our article “Is China in the Bible?”

In “China Is Steering the World Toward War,” Gerald Flurry wrote (emphasis added):

The Bible contains many prophecies of that European power attacking America. This is where China and the other giants of Asia enter the picture. Considering that China now possesses most of the world’s strategic sea gates (at one time held by Britain and America), the German-led Holy Roman Empire will need to form a brief alliance with the Asian powers identified in Isaiah 23 (Russia, China, Japan—the “kings of the east”).

If Europe finds a way to take advantage of key resources and strategic holdings of China, Russia and Japan—even for a short period—then it would have more than enough power to besiege the Anglo-Saxon nations.

Watch as China continues to rise militarily, exerting more influence over its territorial claims in the South China Sea. America has traditionally protected this vital trade route through which one third of world maritime trade traverses each year. As the balance of power shifts in the region, it will dramatically affect trade around the world, especially for America.

If you would like to learn more about what your Bible prophesies about this rising military giant, read our article “The Rise of China as a Superpower.” It will help you understand the significance behind the news you see today.