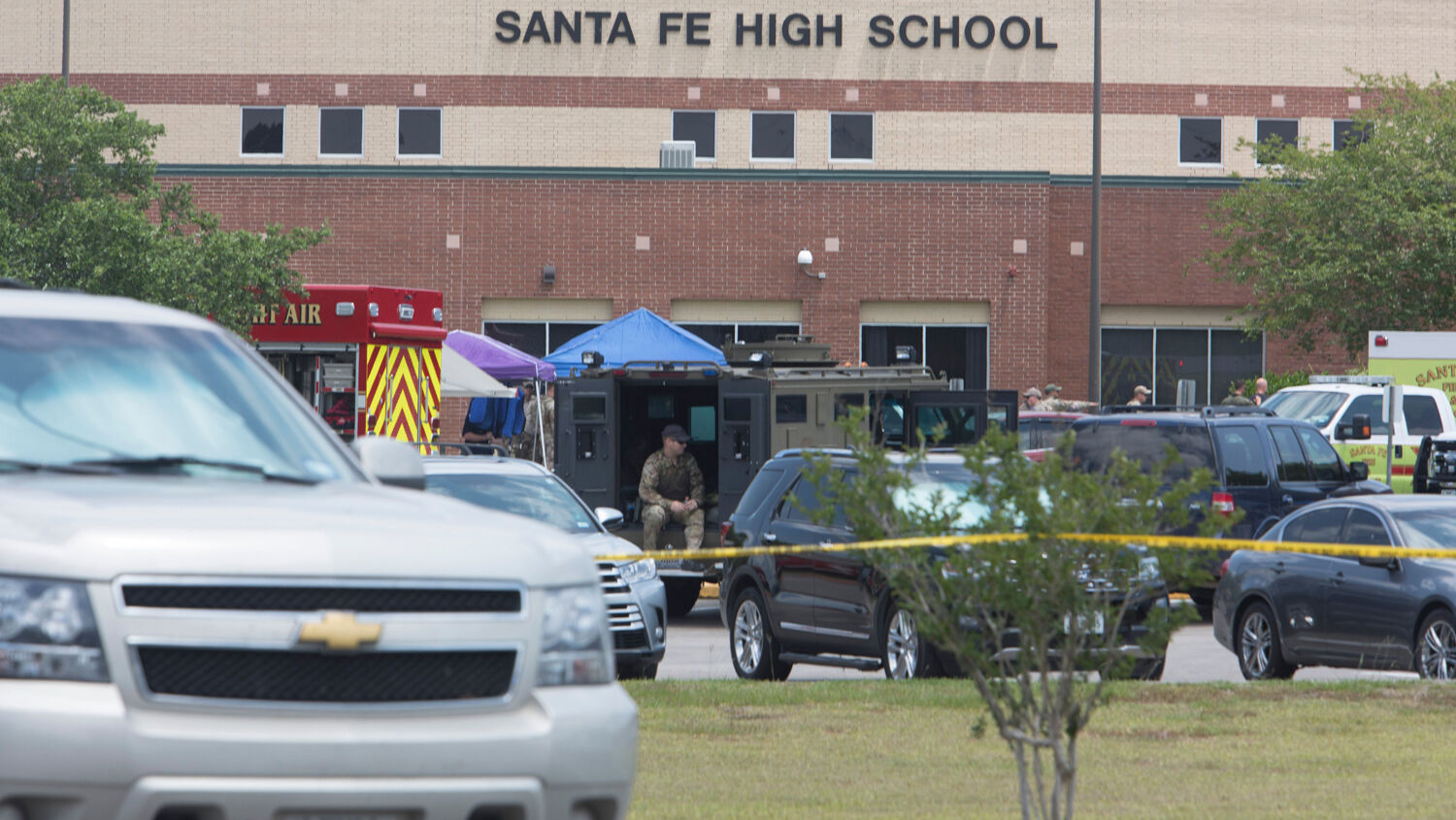 Emergency crews gather in the parking lot of Santa Fe High School where at least eight people were killed on May 18, 2018 in Santa Fe, Texas..’
DANIEL KRAMER/AFP/Getty Images

Ten people are dead and 13 are wounded after another maniacal school shooting.

At 7:30 a.m. on Friday, May 18, tragedy struck a small southeast Texas town. A 17-year-old student opened fire at Santa Fe High School, killing 10 people and wounding 13. The shooter, Dimitrios Pagourtzis, was armed with a shotgun and a pistol owned by his father. He wore a T-shirt that read “Born to Kill.”

Pagourtzis opened fire in an art classroom, allegedly shooting first a girl who had refused to be his girlfriend. A teacher in a nearby classroom heard the screams and the sound of gunfire and barricaded his classroom door, telling his students to hide. He warned them, “Get down! Cover your mouths. Don’t scream.”

In the art classroom, some of the students hid in a closet, but that didn’t save them from Pagourtzis’s bullets. He shot others as they ran away. School police officer John Barnes was “ambushed” by the shooter and hit in the arm. As police arrived, they engaged the killer in a shoot-out for several minutes.

Half an hour after he began shooting, Pagourtzis surrendered to police. He had killed eight students and two teachers. It was the fourth-deadliest mass shooting ever in a U.S. public school. Santa Fe is mourning the loss of members of its community: a cheerful exchange student from Pakistan, an aspiring artist, a beloved sister, a substitute teacher, a football player who had “lots of heart,” among others.

The judge who charged Pagourtzis told the Wall Street Journal, “We had been watching with sympathy and frustration to a degree at the shootings around the country. We can’t believe it happened here.”

As always after a tragedy of this magnitude, people are asking why. A clear motive hasn’t been revealed yet. Not much is known about the shooter’s family. He was known as a quiet but bright student and a football player. According to Texas Governor Greg Abbott, there were few warning signs that Pagourtzis might do something like this. The governor said that unlike the Parkland shooting and others like it, the warning signs were “either nonexistent or very imperceptible.”

There have been some calls for stricter gun control in the aftermath of the shooting, but in general, Santa Fe’s reaction has been similar to the reaction of Charleston after the tragic church shooting in 2015. Texas is largely a Bible-based, Republican state. There has been shock, horror, disbelief—but not widespread calls for gun control.

Governor Abbott called for stricter security, armed teachers and fewer entrances and exits in schools. But for many, that’s not the real solution. Pamela Pannell, a member of Santa Fe’s deeply religious community, told National Public Radio, “We need God back in our schools.”

npr explained: “Almost two decades ago, the U.S. Supreme Court told the Santa Fe Independent School District that it had to stop allowing student-led prayers at school events. It’s a case that still reverberates in the community today.” In their view, it’s not the guns that are the problem—it’s the fact that God has been taken away.

The leader of one Santa Fe church told npr that the problem with America is “we want the other things, but we don’t want God.” He also said, “Guns helped shape America. Guns have insured our freedom. It’s the heart in a man that steers him to do wrong.”

One of the Santa Fe victims, a 15-year-old, had posted a message on social media only a few days before his death. His family was building a new house. The photo showed him standing next to the door frame of what was to be his bedroom. On the door frame, he had written out Psalm 46:10: “Be still, and know that I am God; I will be exalted among the nations. I will be exalted in the earth.”

According to Mass Shooting Tracker, this was the 133rd mass shooting in the United States in 2018. That is a tragic statistic—133 shootings in less than five months, leaving hundreds dead. One member of the Santa Fe community, Robert Ross, told the New York Times that the reason why these things happen is “Satan’s right there.”

Unfortunately, school shootings are becoming more and more common. But that doesn’t make them any less tragic. A reporter asked Paige Curry, a student at the Santa Fe High School, whether she was surprised that the shooting happened. She shook her head, saying: “It’s been happening everywhere. I felt—I’ve always kind of felt like eventually it was going to happen here, too. … I wasn’t surprised; I was just scared.”

Trumpet editor in chief Gerald Flurry wrote in “Why School Violence” in May 2001:

There is a reason for school violence, and for more than 60 years we have been explaining that answer—via radio, television and the print media—to anyone who will listen.

The answer to the school violence problem is clearly revealed in God’s instruction book for mankind: the Holy Bible.

In Ezekiel 7:22-23, God states, “My face will I turn also from them, and they shall pollute my secret [holy] place: for the robbers shall enter into it, and defile it. Make a chain: for the land is full of bloody crimes, and the city is full of violence.” Here, the Almighty Creator of mankind promised that He would not bless or protect His chosen nations of Israel if their leaders would tolerate bloody crimes in their lands!

Over the past five years, there has been a chain of bloody crimes in America’s schools. God is clearly upset about this ongoing problem! He is deeply concerned about kids killing kids—as well as the other bloody crimes which prevail in our land. …

The Fifth Commandment requires children to honor their parents—and by extension every human being, including their classmates. The Sixth Commandment forbids murder. Both of these laws are still very much in effect today.

Curbing school violence must start in the home. It’s all about family. Then, after that, the problem must be addressed in schools and workplaces—and eventually, peace will spread to the nation and the world. That’s exactly how God will bring peace to this entire world when Jesus Christ returns! He will use family government and law to do it.

If you want to learn more about why we have tragic school shootings like the one in Santa Fe, please read Mr. Flurry’s article “Why School Violence.” You can also watch his Key of David program “Why the Virginia Tech Shooting?” That program is from over a decade ago, but it is very relevant to this latest tragedy.