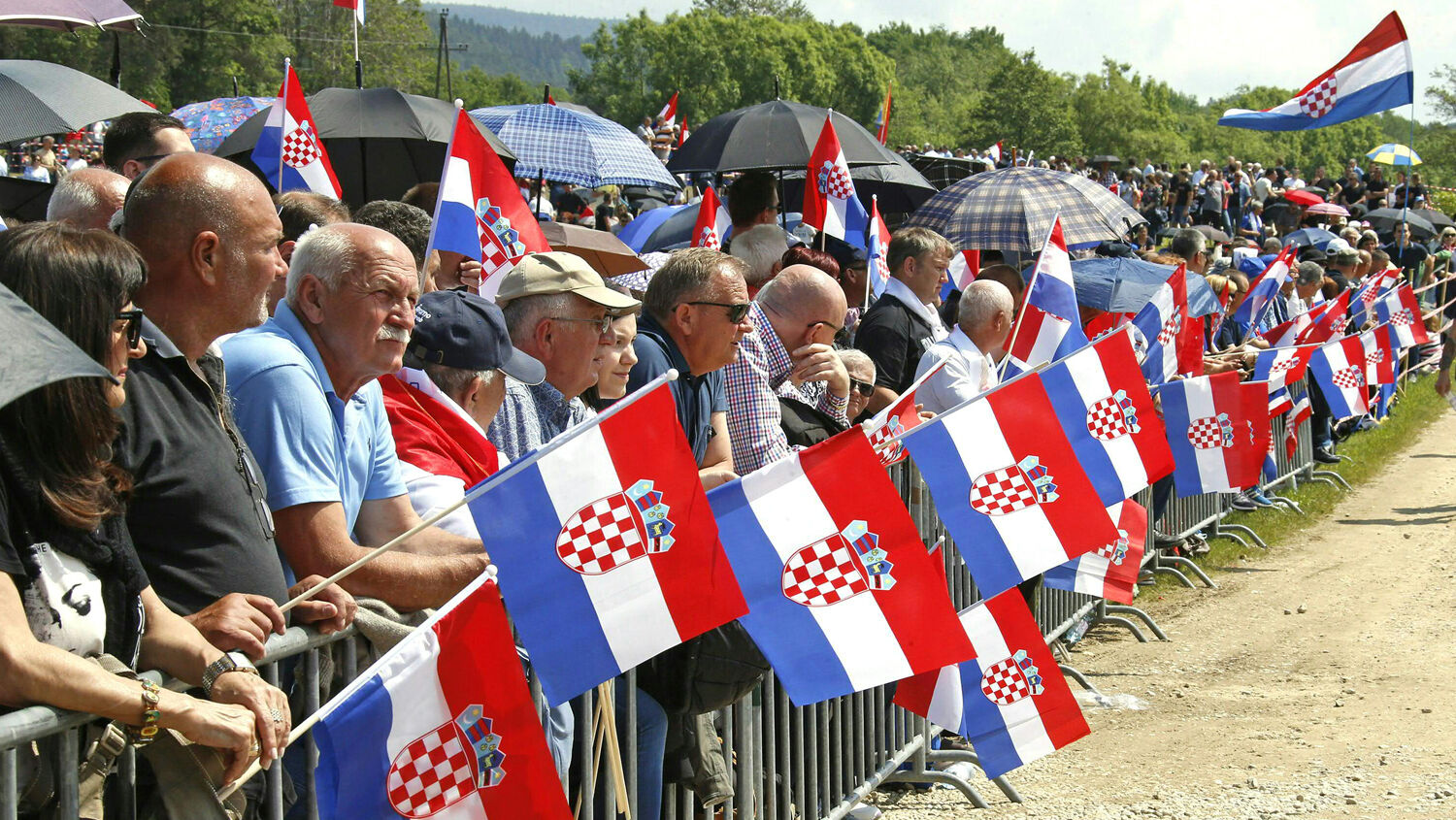 Participants with Croatian flags attend a commemoration rally at the Loibacher Feld in Bleiburg, Austria, on May 12.
GERT EGGENBERGER/AFP/Getty Images

Last weekend, around 10,000 people gathered in a field near the town of Bleiburg in southern Austria for what the Documentation Centre of Austrian Resistance calls the “largest regular neo-Nazi rally” in Europe. Hitler salutes, racist flags and slogans were common. Kids ran around with fascist slogans on their T-shirts. Featured guests gave speeches defending fascism.

Efraim Zuroff, the East European Affairs director for the Simon Wiesenthal Center, called the event “an affront to the memory of Holocaust victims.”

But the most surprising part of this event may be the identity of its organizer: the Croatian Bishops’ Conference of the Catholic Church.

What is the Catholic Church doing organizing a neo-Nazi rally? A look at history points to the answer.

The event commemorates the death of thousands of Ustashi soldiers (estimates vary wildly, but 45,000 seems to be the most commonly cited number). The Ustashi was a fascist movement that ruled the Nazi puppet state of Croatia during World War ii.

In May 1945, with the Nazis on the brink of defeat, thousands of Ustashi soldiers fled Yugoslavia to British-occupied Austria. The British handed them over to their allies—Josip Tito’s partisans—who killed them. The rally in Bleiburg commemorates their deaths.

But take a look at the Ustashi who are being mourned. According to Encyclopedia of the Holocaust, published by the World Holocaust Remembrance Center in Israel, the Ustashi killed over 600,000 people, 500,000 of whom were Serbs. The Ustashi-ruled Independent State of Croatia had a population of around 6.3 million, meaning the Ustashi killed around 1 in 10 of its own people. Eighty percent of the nation’s Jews were murdered. Almost 1 in 4 of its Serbs were killed, and another quarter exiled or forcibly converted to Catholicism.

The Ustashi were gratuitously cruel. As Brad Macdonald writes in The Holy Roman Empire in Prophecy:

Killings were performed in some of the most gruesome ways imaginable. Ustashi soldiers were recorded to have torn victims apart limb by limb, and slit people’s throats with special knives, and removed organs one by one, and smashed people’s heads with sledgehammers. Others were burned alive. No one was spared, and many of these vile acts were performed on children and infants. There are records of Ustashi soldiers cutting open pregnant mothers and ripping out the unborn child.

In other words, the execution of these soldiers by partisans was far from the worst crime committed in the region.

The rally in Bleiburg commemorating these soldiers’ deaths is far from a one-off event. The Council of Europe’s European Commission Against Racism and Intolerance warned that the Ustashi are increasingly being “glorified.”

Austria’s government claims it is powerless to stop the event but said fascist symbols would be banned this year. Journalists on site, however, painted a different picture. Vice’s Roman Möseneder wrote:

Despite a ban on clear political symbols, speeches and uniforms, one attendee proudly performed the—illegal—Nazi salute several times straight into my camera, and in the presence of local Austrian police officers. Tomo Bilogrivić, of the United Croatian Right movement, made a speech in defense of fascism, while racist symbols and flags were openly displayed throughout the field. And though I noticed two people being denied entry for wearing T-shirts bearing the Ustaše slogan, Za Dom Spremni (“For the Homeland”), plenty of others, including children, proudly wore theirs throughout the day.

Year after year, the Catholic Church organizes this event. More than that, it provides the event with an ecclesiastical fig leaf, giving secular authorities an excuse not to shut it down. The Austrian authorities say they’re powerless to stop it because it is an “ecclesiastical” event.

Again, why would the Catholic Church do this?

Alojzije Stepinac, archbishop of Zagreb from 1937 to 1960, was sentenced to 16 years in prison after the war because of his collaboration in the murder of Serbs and Jews. But he was released after only five years. Pius xii made him a cardinal in 1952, and Pope John Paul ii beatified him.

Croatia was not the only fascist regime supported by the Vatican. Pope Pius xi praised Benito Mussolini as “a man sent by providence” after the fascist dictator signed a treaty with the Vatican making Roman Catholicism the only state-recognized religion. The German Catholic Centre Party helped Adolf Hitler rise to power and become a dictator. Its leader, Ludwig Kaas, was a close friend with the man who would go on to become Pope Pius xii. Less than four months after becoming dictator, Hitler signed a treaty with the Vatican. The priests agreed to keep out of politics, while the Catholic Church was granted a major role in education throughout the Reich. The Catholic Church blessed the Reich and ordered its bishops to swear allegiance to it.

And now, 70 years later, the Catholic Church is commemorating the regime it supported.

Such history makes the more than 1 billion Catholics in the world uncomfortable. Thus it is left out of most discussions of World War ii history. If it were included, fewer people would be surprised that the Catholic Church organizes Europe’s “largest regular neo-Nazi rally” to this day.

Catholic ties to this dark period in history are worth remembering. So perhaps there is some benefit to the Croatian Bishops’ Conference keeping them alive.

Read our free book The Holy Roman Empire in Prophecy to learn more of the abundant and clear proof of these ties. Chapter 7 “World War II and Hitler’s Pope” covers these proofs in great detail.

The book will also help you understand what this history means for Europe’s future. As European leaders begin talking again about religion, it’s important to understand what happened last time they traveled down that road. The Bible prophesies that this church will soon become powerful in Europe once again. The Holy Roman Empire in Prophecy will show you, both from history and biblical prophecy, what it will be like.