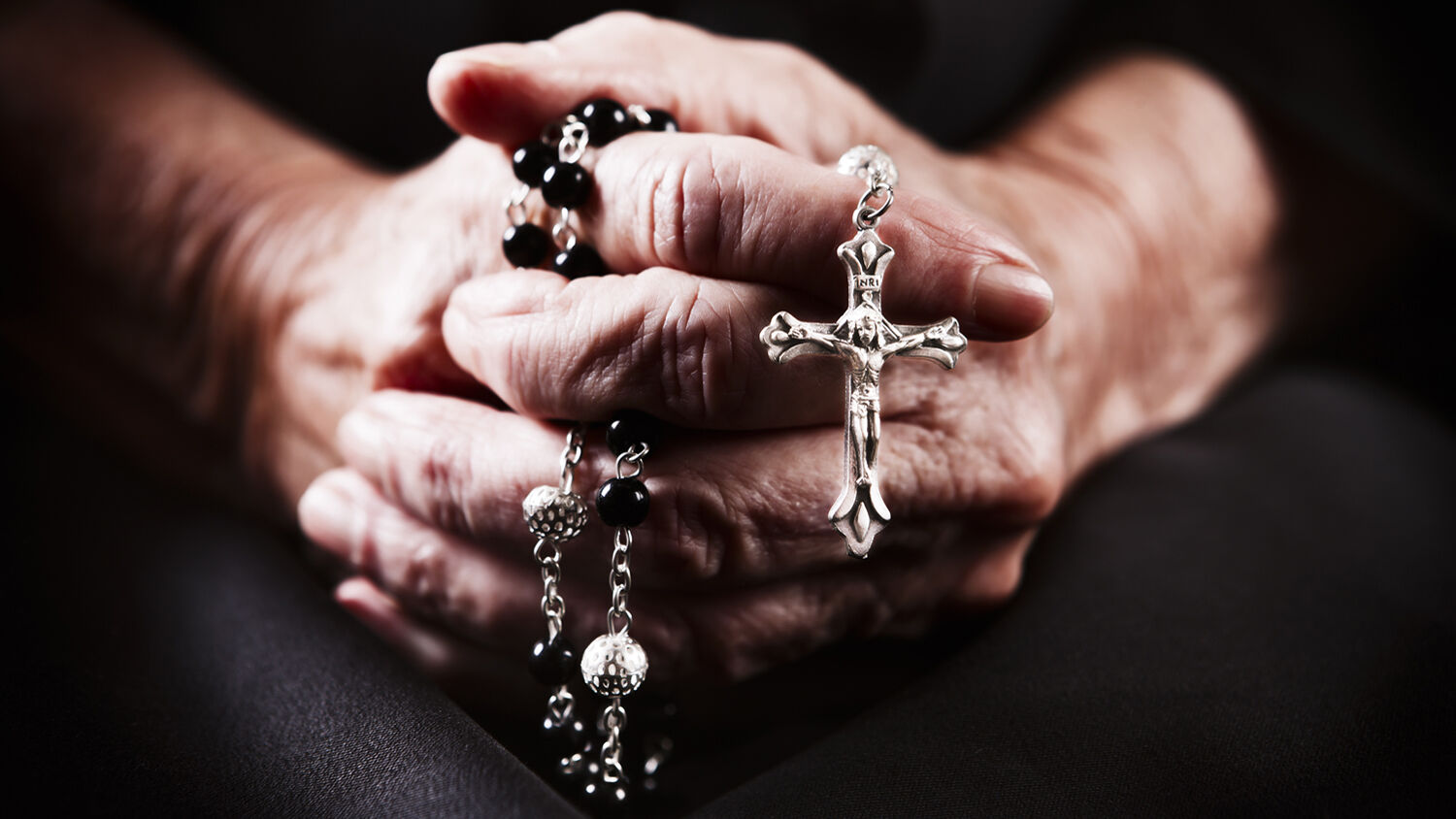 It’s a bit of a silly title, I’ll admit, but I didn’t invent the term “zombie Catholics.” A couple of sociologists coined it a few years ago. Robert Zaretsky helped popularize it in English in his December 2016 Foreign Policy article.

He was writing about the very religious François Fillon. At the time, Fillon seemed on course to win the French elections. His overt religious observance was causing a stir in secular France. “Help, Jesus Has Returned!” declared a headline in the Libération newspaper (Nov. 24, 2016).

These “Zombie Catholics” didn’t attend services but turned out in droves to support Catholic social policies—and Catholic politicians like Fillon.

Emmanuel Todd and Hervé Le Bras describe in their book Le Mystère Français “the rise of social movements shaped by a religion that has disappeared as a metaphysical belief.”

“Catholicism seems to have attained a kind of life after death,” they write. “But since it is a question of a this-worldly life, we will define it as ‘zombie Catholicism.’”

Then Fillon crashed and burned in the 2017 French election after an expense scandal. Talk of zombie Catholics died down. But these zombies didn’t die (again). They’re still here, and once again they are making headlines in France.

French President Emmanuel Macron gave a speech to the Bishop’s Conference of France on April 9. He told the bishops that “the link between church and state has been damaged, that the time has come for us, both you and me, to mend it.”

“A president of the French republic who takes no interest in the church and its Catholics would be failing in his duty,” he said.

In other countries, this may not be controversial. But secularism and a strict separation between church and state has been at the core of French government since 1905. His statement implies that France needs to rethink this century-old relationship—or rather, lack of a relationship—with Catholicism.

Reuters wrote, “Emmanuel Macron has blurred a line that has kept French government free of religious intervention for generations, critics said on Tuesday, after he called for stronger ties between the state and the Catholic Church.”

“It took three centuries of civil war and struggle to get to where we are and there’s absolutely no reason to turn the clock back … because of an intellectual whim of the president’s,” said Jean-Luc Melenchon, a far-left opponent of Macron’s. But even more moderate figures were similarly critical. Manuel Valls, the former prime minister and a Macron supporter back in 2017, tweeted that “secularism is France.”

But why change something so fundamental that it is included in Article I of the French constitution? Reuters hits the nail on the head, under the subhead “The Role of Islam.”

Macron’s “government is now struggling to redefine the role of France’s second-most popular religion, following a spate of attacks by Islamist militants that have killed around 240 people since early 2015,” it wrote. “Hardline Islam sits uneasily with France’s secular foundations, and Macron is under mounting pressure to address voter fears that its influence may spread via mosques and prisons that offer fertile ground for radical proselytizers.”

The rise of radical Islam has forced the issue of religion and secularism back into public discussion.

In 2004, France banned all religious apparel in schools. In theory, this ban includes crucifix necklaces, Sikh turbans and the Jewish kippah. But this was not its intent. The press sometimes called it the headscarf ban: It’s against Islamic religious wear.

In 2010, a ban on hiding the face in all public places was passed. Again, any talk of masks only hides the intent of the ban: the Islamic headdress of the niqab and burka.

Around the same time, political leaders talked more about adjusting France’s secularism. Then presidential candidate Nicolas Sarkozy called France “the eldest daughter of the church.” While in office, he warned that France had adopted a negative secularism and needed to change to a more positive version. This was echoed by then Pope Benedict xvi, who, in a visit to France in 2008, called for “a new reflection on the true meaning and importance” of France’s secularism.

This renewed focus on France’s Catholic heritage makes sense. In response to the very visible rise of Islam, people are asking what it means to be French—what is the common heritage that all Frenchmen should adopt. So much of that gets back to Christianity and the Catholic Church.

Rogers Brubaker, a sociologist at the University of California–Los Angeles, summed up this renewed French interest in Christianity last year in the Atlantic magazine. “It’s a matter of belonging rather than believing,” he said. Brubaker described it as a Christianity that says, “We are Christians, precisely because they are Muslims. Otherwise, we are not Christian in any substantive sense” (May 6).

This is the “zombie” Christianity rising all across Europe.

Christianity is not motivating people to attend religious services or to obey religious rules, but it is being used to drive people to vote for religious-sounding leaders.

The trend is even more visible in Eastern Europe. But its success in France is probably most remarkable. If a religious revival can happen in such an aggressively secular Western nation, it can happen anywhere.

I wrote on this trend last November in my article “A Religious Revival in Europe?” This is my conclusion to that article:

The Trumpet and, before us, the Plain Truth have been watching for this development since the 1930s. For decades Herbert W. Armstrong forecast that Europe would unite into a 10-nation superpower. But most of the Continent’s history is of one European nation fighting another. What force is strong enough to bind Europe together?

Attacks on Europe from outside are one powerful motivating force. Europeans certainly have one common enemy: radical, extremist Islam. But there is one other important factor all European nations share: their Christian heritage.

In August 1978, Mr. Armstrong wrote in the Christian-living magazine Good News, “Europeans want their own united military power! … They have made a real effort toward union in the Common Market. … But they well know there is but one possibility of union in Europe—and that is through the Vatican.”

Mr. Armstrong forecast a European union, with a common currency, led by a united Germany. He said nations then locked behind the iron curtain would be part of it. This has all happened, but we still haven’t seen the full union he forecast. Why? Mr. Armstrong wrote, “In only one way can this resurrected Holy Roman Empire be brought to fruition—by the ‘good offices’ of the Vatican, uniting church and state once again, with the Vatican astride and ruling …” (Plain Truth, January 1979).

As I wrote last year:

The Catholic Church has been the one missing ingredient in European unity. And now that ingredient is being added back into the mix.

The same prophecies that forecast European unity also foretell that a church will have a major role in leading this new superpower. Revelation 17 describes a woman that sits “upon many waters.” Her power stretches over a vast portion of the Earth. Typically in the Bible, a woman represents a church. The “kings of the earth have committed fornication” with this woman, meaning that she is a major political power.

Revelation 17 gives us other important details about this power. It says this power “was and is not.” This power exists, then vanishes—only to “ascend out of the bottomless pit.” It seems dead—and then it’s back.

The term “zombie Catholics” may not be so silly after all.

The Bible has a great deal to say about what this “zombie” European religious power will look like. And so does history. Religious empires, in close alliance with the Vatican, have repeatedly risen in Europe.

Our free book The Holy Roman Empire in Prophecy puts this history and prophecy together. It proves how much of this prophecy has already been fulfilled. It shows what is to come in the near future, while at the same time proving what a sure foundation Bible prophecy is.