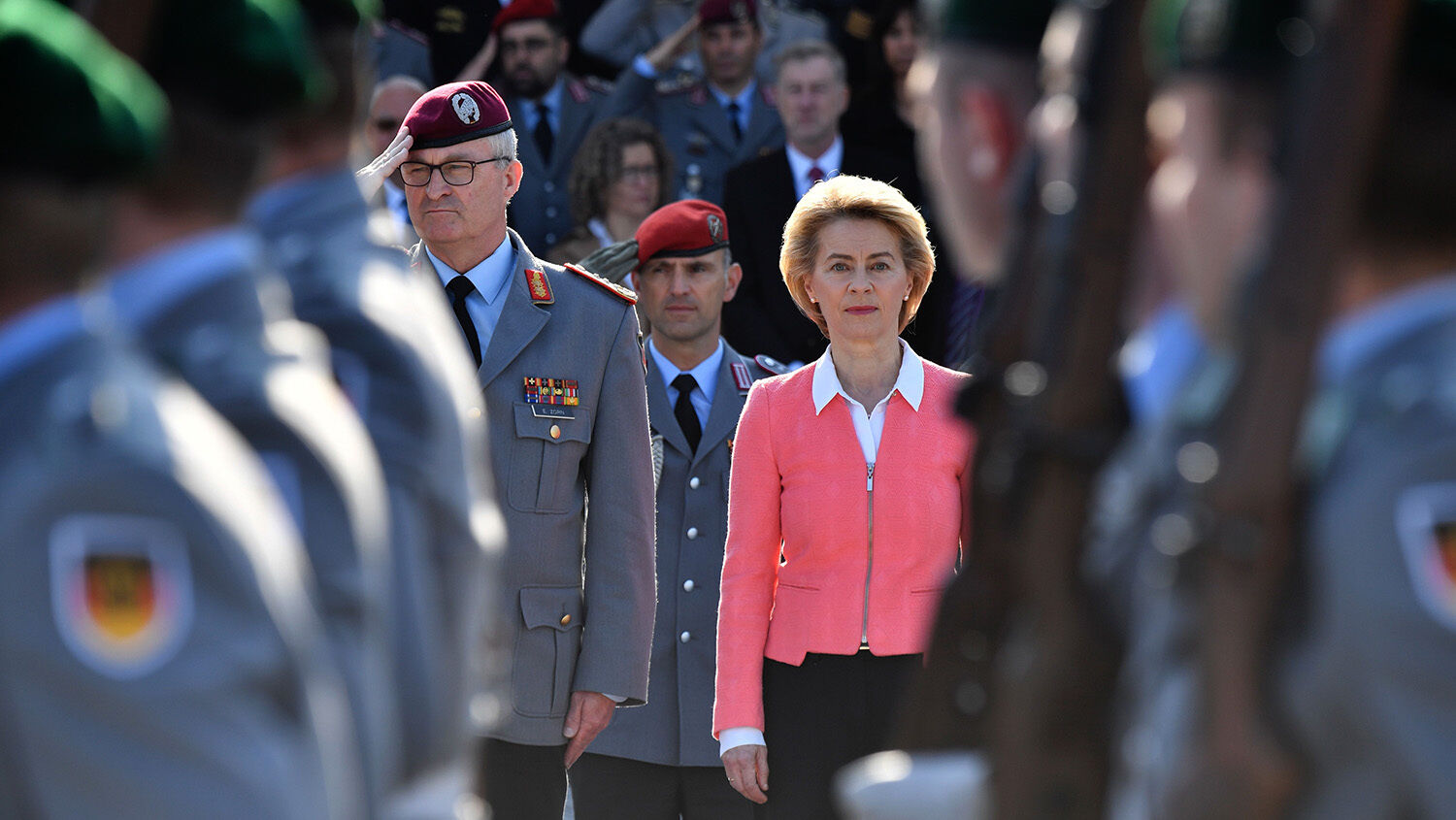 Germany’s military wants more money. Exactly how much money it will receive is a divisive subject within the new government.

United States President Donald Trump continues to demand that Germany spend 2 percent of its gross domestic product on its military. Doing so would cause German military spending to parallel that of Russia’s at $69 billion.

In 2017, Germany increased its military budget by 3.5 percent to $44.3 billion. It pledged to boost the defense budget by around $6.5 billion over the next four years. But in light of “outstanding requirements and need for modernization,” the Defense Ministry describes the additional $6.5 billion as “inadequate.”

German newspaper Bild reported on April 29 that Defense Minister Ursula von der Leyen is trying to hold the federal government to ransom to get more cash. In 2019, she says, the military budget should be increased by $3.5 billion; in 2020, by $4.7 billion; and in 2021, by another $5.9 billion. Those increases would raise Germany’s defense budget by $14 billion, which would bring it up to nearly $70 billion.

“This is about the future capability of our armed forces and Germany’s ability to stand by our allies,” von der Leyen said.

A recent revelation should give von der Leyen’s demand even greater urgency. Der Spiegel reported that only four out of Germany’s 128 Eurofighters are currently ready for combat. But concerns were already on the rise earlier this year. The British Telegraph reported:

A parliamentary watchdog warned in February that equipment shortages are putting Germany’s ability to meet its nato commitements “in question.” Only 95 of the German Army’s 244 Leopard main battle tanks were operational at the time because of maintenance issues. None of the German Navy’s six submarines were operational at the end of last year, and only nine of a planned 15 frigates were in service. None of the Luftwaffe’s 14 A400M transport aircraft were airworthy on several occasions last year, and replacement aircraft had to be chartered to bring serving troops home.

If she doesn’t get her way, von der Leyen is threatening to end joint arms deals with France and Norway. Germany is currently building submarines for Norway, while Norway provides antiship missiles. Germany’s arms industry is also working on six C130 Hercules aircraft for a joint military transport squadron with France. If von der Leyen pulls out, the German arms industry will suffer and Chancellor Angela Merkel will have to deal with the diplomatic fallout.

Von der Leyen already revealed how she wants to spend the extra money. The first €450 million (us$533 million) has been divided into 18 packages each worth about €25 million. Bild published a few of the planned purchases:

As German-Foreign-Policy.com pointed out, the military budget will probably not be enough to cover the expensive arms projects under discussion. Among these are the German-French main battle tanks, multipurpose combat ships and new fighter jets. The development costs of the new jets alone are estimated to be $94.8 billion.

While its stock of the Leopard battle tank are planned to increase from 230 to 328, new tanks are already being designed. Together with France, Germany plans to build a new battle tank, currently referred to as Main Ground Combat System (mgcs). The mgcs is designed to counter Russia’s recently produced T-14 Armata supertank.

Another project that will account for billions in Germany’s future military budget is the production of its own fighter jets. Instead of purchasing the U.S.-made F-35, the European Union seeks to produce its own, to gain greater independence. Together with France, Germany plans to develop a fighter jet capable of competing with its American counterpart. The two countries are also working on a Future Combat Air System (fcas). The new system will equip the jets with the ability to operate with other fighter jets, guiding weapons, drones and drone swarms.

German-Foreign-Policy.com also pointed out that the German arms industry is preparing to face off against Russia’s naval force. The newly built F125 frigate is not even deployed yet, but Germany is already considering another addition. While the F125 is most useful in missions against pirates and smugglers, Berlin is now urgent to develop a naval force ready to engage in regular warfare. Therefore, it is planning to construct the MKS 180.

These super warships are 200 meters long, have a 5,000-ton water displacement, and will be able to transport 180 people. They will surpass their predecessors in various abilities. Die Welt reported that the warship will be able to ward off underwater, surface and air attacks. The $4.7 billion ship is planned to launch by the end of 2026.

The MKS 180 will join the five corvettes currently under construction and set to launch in 2022. The corvettes, as German-Foreign-Policy.com pointed out, are “smaller and more maneuverable than frigates and ideally suited for operations in coastal and inland seas—like the Baltic Sea where the navies of various nato countries systematically position themselves against Russia.”

Independence From the U.S.

Germany is leading Europe to become an independent military superpower. This has been Germany’s long-standing goal. One of the nation’s first defense ministers, Franz Josef Strauss, wrote in his 1965 book The Grand Design:

The European nato countries are justified in reading into the text of the Atlantic Treaty an obligation to seek ways and means in the future of making their defense possible from within Europe itself, just as America is able to defend herself. An unsuitably and inadequately armed Europe is of no benefit to America.

Strauss opposed nato’s structure as “an American protective alliance for free European countries” and instead wanted it to be transformed into “an American-European Alliance of Equals” (ibid).

At the time, Strauss’s views were considered to be radical, as he made them only decades after World War ii. America and its allies still remembered the atrocities committed by the German military.

Germany, of and by itself, had been a force to reckon with. Imagine what could happen if all European militaries pulled together, each providing its own specialized forte.

Europe is being pressured to unite into a military superpower in the face of Russian aggression. At the same time, Europe is making great strides toward independence in its production of military equipment and in leading military operations.

There was a time in recent history when Germany suddenly remilitarized and shocked the world. Similar to today, its military suffered from severe “malfunctions.” A few sounded the alarm, but the warning was unheeded. World War i resulted.

Within a few years, the German military was ready for another round after its defeat in World War i. Adolf Hitler transformed its heavily restricted and crippled military into an army that frightened the whole world. That army was also defeated.

But Bible prophecy warns that we are about to see a much more frightening army rise again in Europe. Only this time, Germany will be leading Europe, not seeking to conquer it. Its renewed goal will be complete world dominance.

For decades, late educator Herbert W. Armstrong, founder of the Plain Truth magazine, boldly warned of German remilitarization. As in the lead-up to World War ii, many scoffed at his predictions. But he was proved right. How could he have known? He founded his forecasts on Bible prophecy. We detail his Bible-based prophecies and their fulfillment in our booklet He Was Right, which is free upon request.

In 1957, when Germany was a pile of rubble, Mr. Armstrong said, “Germany is going to rise again with great power.” He said the same thing in 1970. In 1980, Mr. Armstrong wrote, “I have been forecasting this revived Roman Empire publicly since February 1934. Now, it may go together suddenly, rapidly.” It is doing just that today! In 1983, he said, “The Bible prophesies of this coming United States of Europe, a new united superpower, perhaps more powerful than either the Soviet Union or the United States.” He went on to say that we don’t realize the thoroughness of the Germans, and that they are going to carry through what they started in World Wars i and ii in another world war—World War iii.

Note carefully what Mr. Armstrong warned about. He warned that Germany would again rise to power, even though the Allied forces pledged to never allow that to happen. He further warned that Germany would ally both militarily and politically with its European neighbors. He also predicted that this rising superpower would be able to compete militarily with Russia and the U.S. Today, we see these prophecies being fulfilled.

Mr. Armstrong based these forecasts on prophecies found in passages like Revelation 13 and 17 and elsewhere in the Bible. These prophecies describe a militarily powerful group of European nations in this end time.

To learn more about these prophecies and how they’re being fulfilled in Europe today, read our article “Europe’s ‘Underground’ Army.”