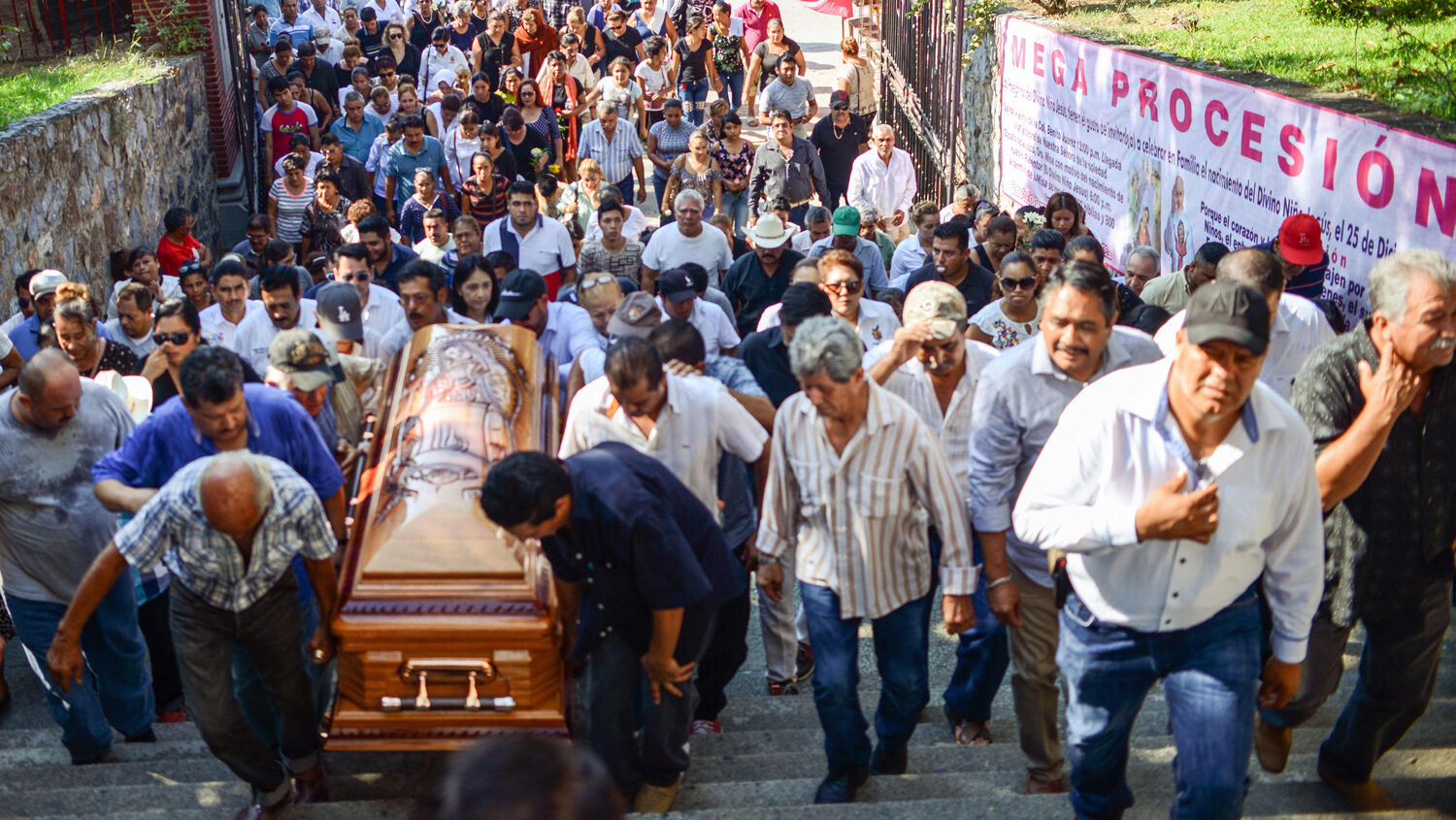 Relatives and friends of the mayor of the Mexican community of Petatlan, Arturo Gomez, carry his coffin during his funeral on Dec. 29, 2017, a day after he was shot dead while dining at a restaurant.
FRANCISCO ROBLES/AFP/Getty Images

Spiritual sickness threatens to plunge the entire North American continent into an unprecedented epidemic of violence.

Mexico is suffering its bloodiest election campaign in history. Over 80 political candidates have already been assassinated in the lead-up to Mexico’s federal and local elections, which are scheduled for July 1.

“This is the most violent election in Mexico’s history,” Rubén Salazar Vázquez, director of the risk consultancy Etellekt in Mexico City, told CNSNews.com.

According to an analysis released by Etellekt, 90 percent of the violence has occurred against politicians running for state or municipal offices, with 66 percent of the assassinations occurring in the well-known drug trafficking states of Guerrero, Oaxaca, Puebla, Veracruz and the State of Mexico.

Among the casualties is 25-year-old Maribel Barajas Cortes, a Green Party candidate, whose body was discovered with multiple stab wounds near her car in an area known as a battleground for local drug gangs. Then there is Juan Carlos Andrade Magana, who was running for reelection as mayor of his small town until he was found dead in his Toyota with multiple gunshot wounds. Both slayings are still under investigation. With approximately 3,400 political offices open this election, drug cartels are undoubtedly behind the wave of violence. If drug traffickers can intimidate or control police and politicians, they can continue their deadly business uninhibited.

Vicente Sanchez, professor of public administration at Colegio de la Frontera Norte in Tijuana, explained to Reuters that cartel leaders are looking to instate puppet lawmakers and take out their contenders, while intimidating reformers who may want to curb their flow of traffic.

This task is made easier when you have an army at your disposal. The United States Defense Department estimates that over 100,000 drug traffickers work directly for Mexican cartels. That’s almost as many as the 130,000 soldiers who work for the Mexican military. And drug cartel ranks have continued to swell since the 2016 capture of drug lord El Chapo and the subsequent splintering of the nation’s two largest cartels.

In addition to slaughtering civil servants, drug cartels control local municipalities by demanding taxes from local businesses and a cut from government budgets, according to a report from the Irish Times. This dirty money is making its way into financial institutions and local economies, creating an unholy marriage between the cartels and society that is getting harder and harder to annul.

Drug cartel violence is turning Mexico into a failed state, and it is not limited to the nations south of the Rio Grande. U.S. law enforcement officials estimate that Mexican cartels have infiltrated more than 3,000 U.S. cities.

The 2017 National Drug Threat Assessment released by the U.S. Drug Enforcement Administration shows the grip drug cartels have in several Texas cities. They are reportedly pumping cocaine, heroin, methamphetamines and marijuana into the state from El Paso to Galveston.

And their scope of operations is expanding into states such as North Carolina. Between 2010 and 2014, Rockingham County jailed 194 illegal immigrants on criminal charges, according to local Sheriff Sam Page. Sheriff Page told the Washington Times, “We’re only a two-day drive from the border, and have already seen the death and violence that illegal crossings bring into our community.” Frederick County, Maryland, is another community feeling the ramifications of unfettered illegal immigration, with 9 percent of arrests involving illegals. Of the 1,250 illegal immigrants arrested by Frederick County law enforcement since 2008, 4 percent have connections to Mexican cartels.

While many U.S. Border Patrol agents are faithfully waging war against these evils, a growing number are facilitating them.

“The agents are bought,” a cartel boss in the armed wing of the Juárez cartel told Mexican newspaper El Universal in 2016. “The large loads pass by the checkpoint, pass by Migration; they are well arranged. The car greets them and it gives them an envelope with a lot of money, and already they are told what color and what brand is the car coming with the load, and they let it pass.”

The Center for Investigative Reporting documented 153 corruption investigations showing that this type of criminal collusion, while infrequent, is not uncommon. In 2016 the New York Times reported that, from 2006 to 2016, nearly 200 employees of the Department of Homeland Security took nearly $15 million in bribes. Although these employees represent less than 1 percent of the total workforce, they can wreak considerable havoc.

Former Border Patrol agent Ivhan Herrera-Chiang is perhaps the best illustration of this fact. According to the New York Times, Herrera-Chiang “provided maps of hidden underground sensors, lock combinations to gates along the United States-Mexico border, and the locations of Border Patrol traffic checkpoints to an individual who provided them to cartels. The cartels used the information to bypass Border Patrol agents and transport methamphetamine, cocaine, and marijuana in the country ….”

President Donald Trump’s pledge to “break the back” of the cartels by building a wall on the Mexican border is an admirable one, but how effective is a wall if its custodians covertly remove its bricks? Mexican drug cartels target Border Patrol agents because of America’s insatiable appetite for their products. This demand perpetuates the corruption of our officials and even the defection of our soldiers.

Cartels have been recruiting corrupt U.S. soldiers to act as hit men in the U.S., paying them to assassinate federal informants and crime rivals. It will not be long until America’s drug habit causes the type of political assassinations plaguing Mexico to spread north into the U.S.

Conservatives say this problem can be fixed with a border wall, while progressives say that legalizing marijuana and decriminalizing “hard drugs” like heroin and methamphetamines will help turn criminal cartels into law-abiding enterprises. But the truth of the matter is that politicians are being shot and border control agents are being bribed because a spiritual sickness has taken root throughout North America.

The Bible calls this sickness “pharmakeia,” and it is listed as one of the works of the flesh in Galatians 5:19-20. The King James translation renders this word as “witchcraft,” but a more exact rendering is “the use or the administering of drugs.”

Even during the time period of the New Testament, the hypnotic qualities of the poppy plant were well known. The ancient Greeks used opium in their pagan religious ceremonies. Things have only become worse in the past 2,000 years. Today, approximately 25 million U.S. citizens and 4 million Mexican citizens use opium, heroin and other drugs in a vain attempt to fill the spiritual void in their lives with drug-induced moments of fleeting euphoria. But the fruits of drug addiction only make their spiritual void worse.

In the Old Testament, the Prophet Hosea foretold that the modern-day descendants of ancient Israel (the peoples of America and Britain) would suffer serious problems if they rebelled against God’s law.

“Hear the word of the Lord, ye children of Israel: for the Lord hath a controversy with the inhabitants of the land, because there is no truth, nor mercy, nor knowledge of God in the land. By swearing, and lying, and killing, and stealing, and committing adultery, they break out, and blood toucheth blood. Therefore shall the land mourn, and every one that dwelleth therein shall languish, with the beasts of the field, and with the fowls of heaven; yea, the fishes of the sea also shall be taken away” (Hosea 4:1-3).

This passage describes cause and effect. Because there is “no truth, nor mercy, nor knowledge of God in the land,” people swear, lie, kill, steal and commit adultery. The resulting immorality breaks apart families, leading millions of hopeless youth to join gangs and take drugs. The end result is that that “blood toucheth blood.” The violence becomes so bad that there is hardly a reprieve between stabbings, shootings and political assassinations.

This isn’t a problem that will be solved by the White House. It is a problem that must be solved in the 168 million homes spread across Mexico, the United States and Canada. If there isn’t repentance on a nationwide scale, the ripple effects of transgressing God’s law will continue to spread until the entire North American continent experiences a tsunami of violence even worse than the horrific crime wave that has already inundated Mexico.

God promises to bring peace and prosperity to Mexico, the United States, Canada and every other nation. But first, the people of these nations must learn that any society without God’s sacred moral code to govern the actions of individuals cannot stand.