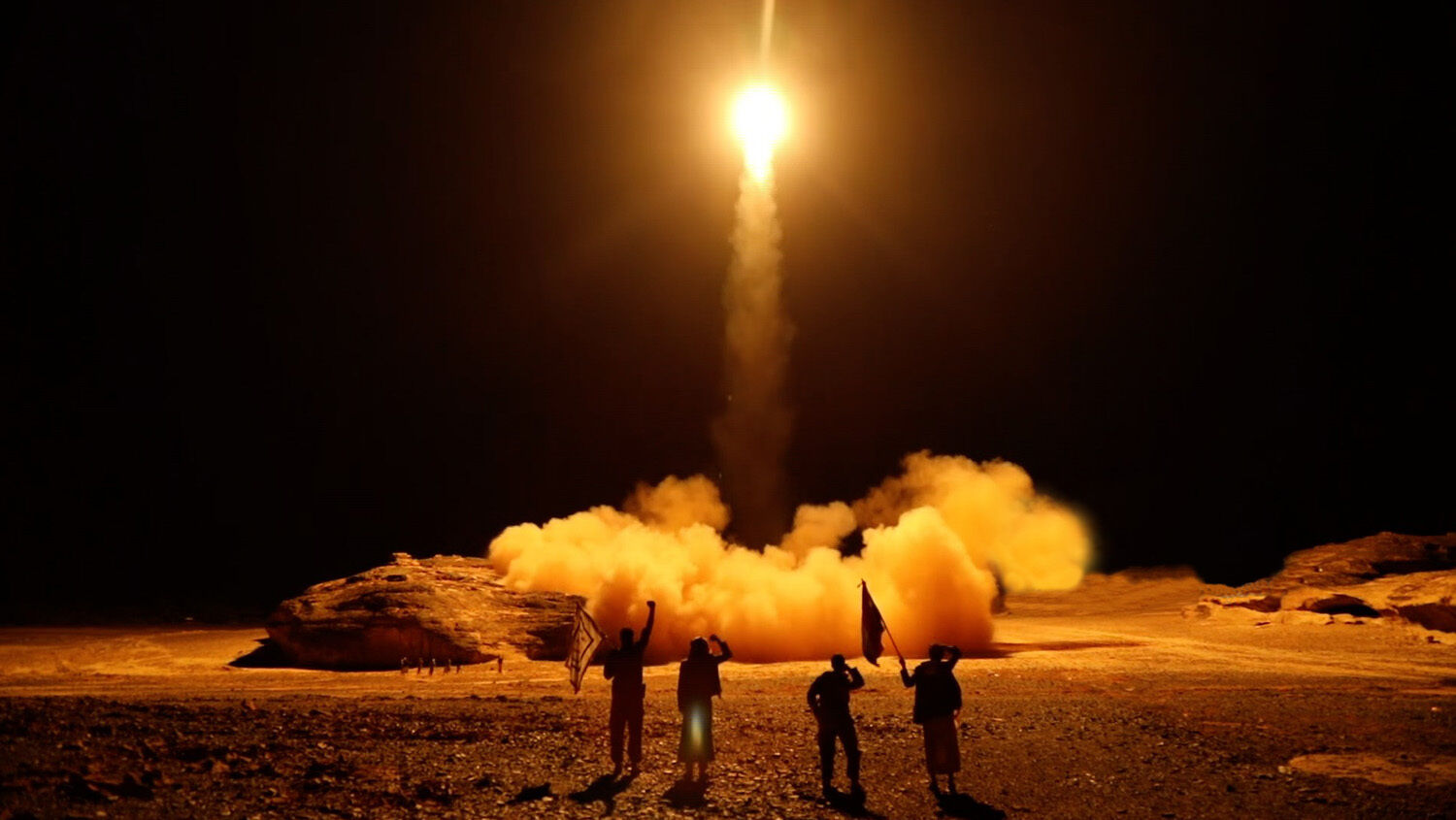 An image grab from a video handed out by Houthi rebels on March 27 shows what appears to be Houthi forces launching a ballistic missile on March 25, reportedly from the capital Sanaa.
AFP/Getty Images

Iran and Saudi Arabia are attempting to outmaneuver each other in the Red Sea. We know who will win.

Houthi attacks on Saudi oil facilities are increasing. The Yemeni rebels have claimed eight attacks since early March, though the Saudis dispute the number.

Even so, Houthi efforts to target these facilities could have global implications.

The latest attacks have targeted Saudi company Aramco, the world’s largest oil company. Aramco is in the final stages of developing an oil refinery at its port facility in Jazan. The port is on the Red Sea, north of Yemen. This makes it a prime target for the Houthi.

On Monday, April 23, the Houthis tried again. Two ballistic missiles were launched toward the site. Both were intercepted over the Jazan province. It remains unclear what type of ballistic missile was launched. It stands to reason that it would be the same as the April 11 variety—the Qasef-1. According to a 2017 report by Conflict Armament Research, the Qasef is “consistent with descriptions and imagery” of Iran’s Ababil-T missile.

Many analysts doubt the missiles are homemade. Common knowledge suggests the Houthis lack the resources and skill to design the rockets. Evidence suggests Iran has been supplying the firepower.

So why then are the Houthis and their Iranian sponsor targeting Saudi oil facilities? It has everything to do with subjugating Riyadh and controlling the world oil market.

The Jazan facility will process 400,000 barrels of crude per day. From there, the oil can flow north to Europe via the Suez Canal. In this way, Saudi Arabia bypasses Iranian chokepoints at the Strait of Hormuz and the Bab el-Mandeb.

Through these choke points sail tankers carrying the vast majority of Middle East oil. This gives Iran immense leverage to control world oil prices. Were Iran to shut down either sea-lane, global trade could be brought to its knees. The Trumpet regularly warns of this looming crisis.

On Oct. 25, 2016, Foreign Policy wrote, “If a coastal foe can menace shipping transiting [the Bab el-Mandeb] seaway, it would disrupt the shortest, most convenient sea route connecting Europe with South and East Asia. Doing so would carry significant economic and military repercussions.”

The facility in Jazan is part of a large project by Aramco to boost its oil trade to 6 million bpd (barrels per day) of crude and refined products by 2020. That is up from 3.6 million bpd at the moment. The more it produces, and the more Red Sea facilities it has, the less Saudi Arabia can be affected by Iranian interference.

Aramco has been working to expand the capacity of the East-West crude oil pipeline. This line carries oil from the Persian Gulf to the Red Sea. Right now it can carry 5 million bpd.

Iran’s desire to control the Bab el-Mandeb is paramount to its strategy. And the ability to attack Saudi oil facilities is a great side benefit for Iran.

And it won’t end with missile attacks. Prophecy indicates Iran is about to gain a far more devastating tool to control the oil trade: Egypt.

Scripture shows that Riyadh is about to be outfoxed by a powerful alliance.

The Trumpet often references Daniel 11 when discussing the Middle East. Verse 40 describes a power called “the king of the south”—referring to radical Islam led by Iran.

Notice who is part of this alliance. “He shall stretch forth his hand also upon the countries: and the land of Egypt shall not escape” (verse 42). This indicates Egypt will be part of this alliance with Iran! Some might say this is hard to believe, but remember 2011. In a moment, Egypt transformed into a radical Iranian ally. It will happen again.

Now consider how this affects Saudi Arabia and Europe. Suddenly Iran will have total control over Saudi oil leaving the Middle East. Three sea-lanes—the Strait of Hormuz, the Bab el-Mandeb and the Suez Canal—and all three are in regions controlled by the king of the south.

In April 2011, Trumpet editor in chief Gerald Flurry wrote, “If Iran gets control of that trade route [through the Red Sea], it could create enormous damage and chaos in America and Europe almost overnight.”

Prophecy speaks of Iran wielding this terrible economic weapon. Daniel 11:40 says that Iran is going to “push” at Europe. As Mr. Flurry wrote, “The king of the south is going to push at the king of the north, probably from its trade route power.”

The following February 2015 Key of David program is a must-see for anyone who wants to understand this “push.”

Iran will get a reaction. The ensuing verses of Daniel 11 show Europe—the king of the north—will destroy Iran’s alliance. If you want to know how a German-led Europe is preparing for this assault, read our free booklet Germany’s Secret Strategy to Destroy Iran.

“Yemen is one of the most strategically important countries in the world, certainly in the Middle East,” Mr. Flurry said in his Key of David program titled “The Yemen Crisis.” The Houthi takeover of Yemen is “changing the course of the Middle East in many ways. And that is what we need to understand, and it’s going to affect all of us. It is going to affect individual lives in this country [the United States] in a way that I think is hard for people to imagine.”

Right now Saudi Arabia and Iran are attempting to outmaneuver each other in the Red Sea. Prophecy indicates Iran is about to gain the upper hand with deadly consequences. For more information, request our free booklet The King of the South.