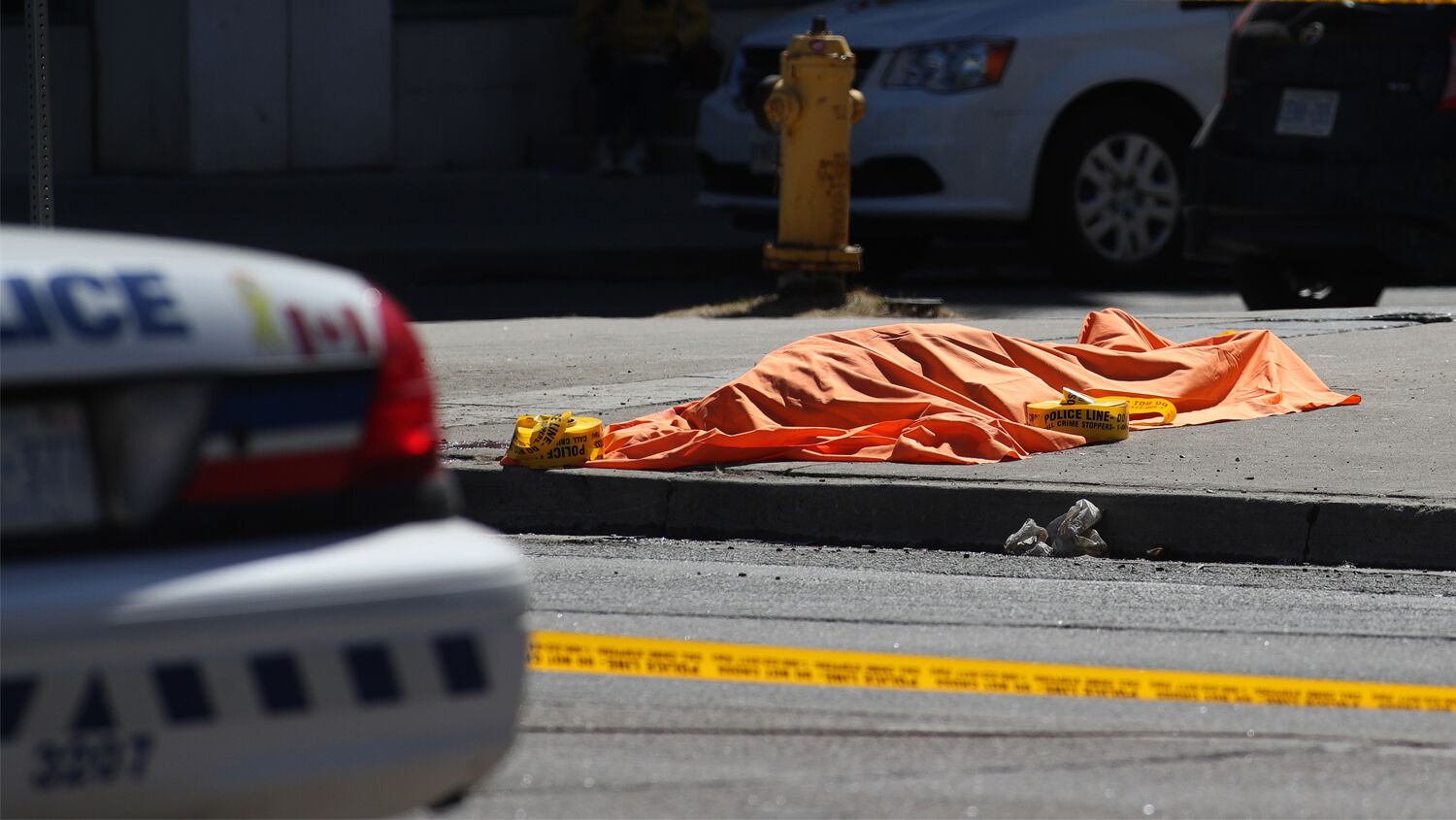 An unidentified victim lies on a sidewalk after a terrorist mowed down a crowd of pedestrians in Toronto, Ontario, on April 23.
LARS HAGBERG/AFP/Getty Images

There is a cause that most people ignore.

Was it mental illness, or an act of terrorism, when demented Alek Minassian drove a rented van down a sidewalk in Toronto, intentionally running over and murdering as many victims as possible on Monday afternoon? Canadian authorities still don’t know the motive. Setting aside the macabre details, 10 were murdered, 15 were injured, and the disturbed young man was taken into custody after trying to goad a policeman into shooting him in the head.

Sadly, this latest terror attack in Toronto is just another of many similar, grisly scenes playing out with increasing frequency in major cities around the world. Disturbed young men are getting behind a wheel and plowing down innocent bystanders. Torontonians are the latest to be left wondering what in the world is going on with this world.

After the attack, social media and politicians quickly banded together in a show of unity. Toronto was bruised but not broken. Good would triumph over evil.

Helpless to change the bloody events of the day, by the time of puck-drop for a major professional playoff hockey game in downtown Toronto later that night, the city was ready to move on.

Helpless to effect a personal change for the better, mass murder was quickly reduced to the emotional level of hearing about a bad car wreck with some fatalities.

Helpless to make sense of the sheer evil and indiscriminate nature of the crime, the city immediately fell into a “keep calm and carry on” attitude—giving tacit acceptance of terror as a part of day-to-day life.

I was in Toronto when news of the terror attack broke, and I was stunned to learn it occurred on the exact sidewalks where my wife and I had once frequently visited. Broadcast images of dead bodies were shown lying motionless where I had once walked hand-in-hand with my wife, or by myself on an errand, and had even let my little children run ahead of me carefree.

The images showed the same Asian fast-food stand we had visited—one of its employees had been mowed down and killed. Above the sidewalks, gleaming towers of glass housed thousands of people, each one a potential target. On these sidewalks, babies in strollers were a common sight.

In retrospect, the sidewalks targeted were ideal for this insidious crime: broad, and usually teeming with people walking to or from a nearby subway station, or enjoying the sights and sounds, or eating at one of the many ethnic restaurants that fronted the 1-mile terror spree corridor. It is amazing that more people were not killed.

Every Canadian knows something deeply evil occurred on the streets of Toronto, but are at a complete loss to explain why it happened. The usual suspects have fast come under the spotlight—terrorism and mental illness (though the distinction between the two is purely academic).

When a crime of this nature occurs, the depth of evil is beyond most people’s capacity to understand. Most conclude the crime to be utterly senseless—although all crime is. What generally follows is a deep investigation into why the crime occurred. How could this happen? The life of the assailant will be picked apart by media, the court system and mental health experts, and still other experts will be called upon to divine some meaning from it all. Thereafter, maybe, but probably not, some law will be passed or some new approach to psychology or mental health policy derived. But such moves cannot prevent these crimes—and will never prevent them. They can provide no solace or hope. And faced with such confounding futility, most people have accepted this kind of unimaginable evil as a normal part of life.

Few stop to ask themselves where evil comes from. Hardly a parent in the world purposely raises a child to be an evil monster. So why and where and how do people end up committing such atrocities? What led Alek Minassian to rationalize this heinous evil as something good? Surely whatever it was is twisted and grotesque.

Only the Bible supplies the answers and the hope and the solution to world evils, and to the crimes of the nature Toronto is now trying to come to terms with today. Most would accept, without question, a faulty human medical hypothesis to explain why these evils. Will we accept God’s sure answer? The Word of God unequivocally says good, as well as evil, are spiritual in nature. There is a spiritual component to every human life.

The Bible refers to God as the originator of love and goodness and of the qualities most people hold in high regard today. However, the Bible also refers to a lawless spirit being named Satan and his fallen angels, now demons, that are confined to Earth! (Revelation 12:12). Satan is the god of this world (2 Corinthians 4:4). He rules this present evil world. He is the original author of every evil; and, with the demons, he has been cast down to Earth. They are in a frothing, red-hot rage. Many people are agitated and influenced emotionally and mentally by demons. Others are possessed by them, and go on to commit murderous, heinous crimes.

Toronto, like the rest of the world—but especially America, Britain, the Commonwealth nations and the State of Israel—is under attack. For this reason, the Trumpet has been sending out a strong warning as a witness to Toronto. Since April, we have been distributing free copies of the Trumpet magazine in multiple public transportation sites in the city, including a bus stop that Minassian took out with his van. The busy pedestrian mall of Yonge Street, now closed because of the attack, has multiple newsstands that offer the Trumpet. The Trumpet’s editor in chief, Gerald Flurry, is planning a public appearance campaign in Toronto for June this year.

This is part of the Trumpet’s effort to warn all nations and to freely give the plain truth and understanding behind the anxiety-riddled headlines we read today.

The evil behind the latest Toronto terror attack is not unfathomable. It can be understood. Satan and the demons are cast down to the Earth. All who seek true understanding as to why evil exists should also seek God’s protection by obeying His commandments.