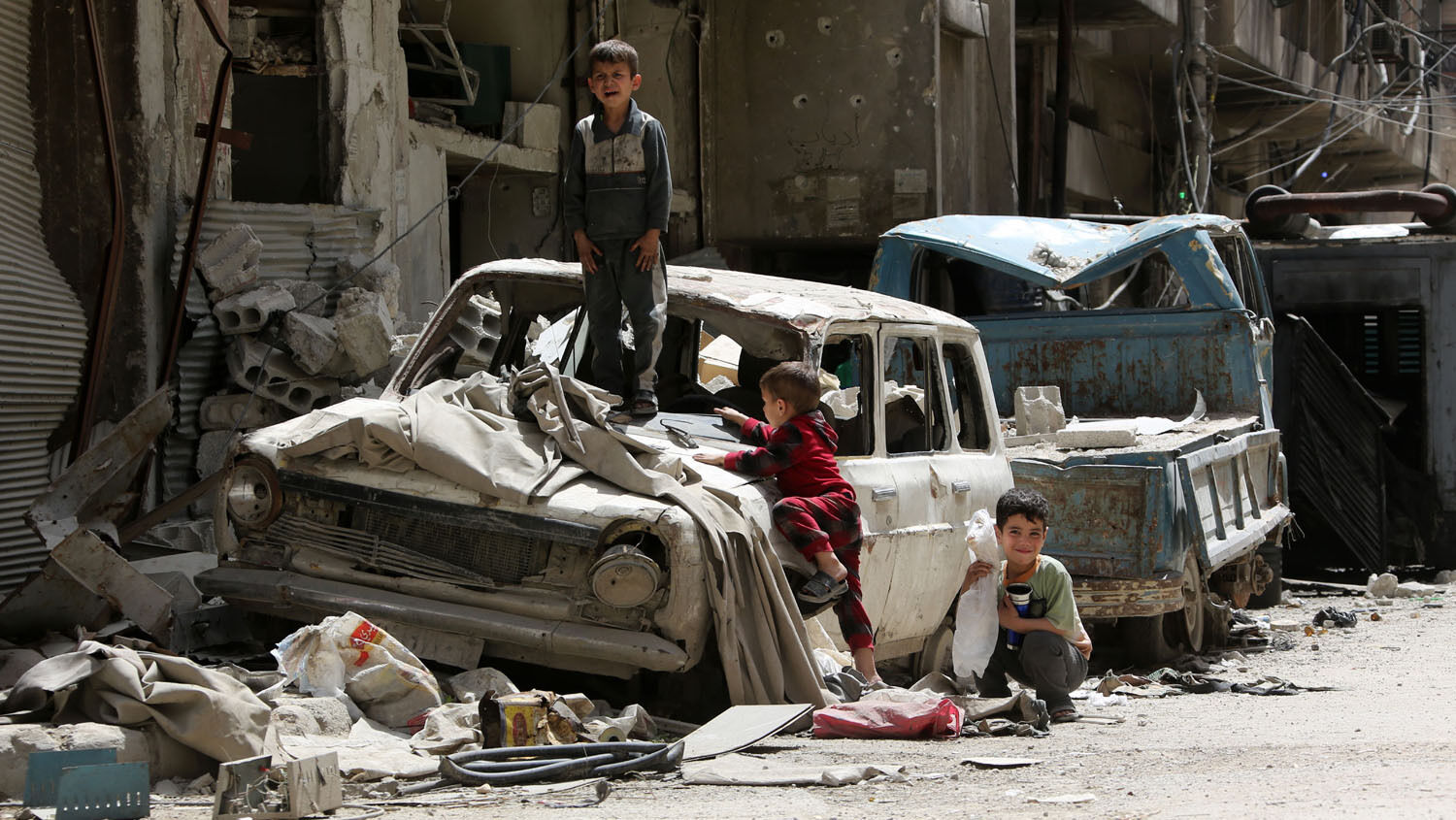 Syrian boys play on a destroyed car in the former rebel-held Syrian town of Douma on the outskirts of Damascus on April 19.
STRINGER/AFP/Getty Images

Former defense minister says he has had enough of Germany’s ‘cheap excuses.’

Germany supports military action against Syrian President Bashar Assad—but it doesn’t want to do the “dirty work.” This is how former German Defense Minister Karl-Theodor zu Guttenberg summarized his nation’s position on Syria.

“We support the fact that our American, British and French allies have taken responsibility in this way as permanent members of the UN Security Council,” Merkel said. At the same time, she made clear that Germany would not take part in military action against Syria.

This provoked unusual direct criticism from Germany’s former rock-star politician. “When people are slaughtered, you also have to intervene,” Guttenberg said (Trumpet translation throughout).

Guttenberg accused the chancellor of sending wrong signals to the public and reducing awareness of the barbaric acts of Assad’s regime. He said that when “human rights are trampled on and men are slaughtered,” one has to intervene. “Of course, it is easy to say we leave the dirty work to others and draw back to the safe side,” Guttenberg continued. “But in the long term, one won’t get around it that way.”

The Syrian civil war has continued for more than seven years. Chancellor Merkel has insisted for years that the future of Syria must “be without Assad.” Guttenberg agrees, but he also argues that Germany’s commitment “has to go beyond fine and pretty words.” Germany could contribute through various forms of logistical support or through its intelligence services, he said. But to “wiggle out of it dialectically” gives a totally wrong impression. “We are talking about the use of poisonous gas,” he stated. “We are talking about a grievous violation of human rights. I believe always drawing back is not the right approach.”

Thus Guttenberg appealed to the German federal government to intervene in Syria and take part in the dirty work.

His criticism made headlines throughout Germany and even internationally. “Guttenberg Attacks Merkel,” the Frankfurter Allgemeine Zeitung reported on April 16. “Angela Merkel’s possible successor has slammed the chancellor’s lack of intervention in Syria,” wrote the British newspaper Express.

Guttenberg’s message is controversial. After instigating multiple wars, including losing efforts in World War i and World War ii, the Germans have been reluctant to engage in warfare, even as their economic, industrial and political power have grown to dominate the Continent.

Even today, most Germans agree that their nation should not involve itself in the Syrian civil war. Guttenberg thinks differently.

Guttenberg Is a Man Willing to Wage War

In 2009, when he was defense minister, Guttenberg referred to Germany’s involvement in Afghanistan as war. Due to the nation’s 20th century history, which resulted in the Allies proclaiming that German militarism must be permanently destroyed after World War ii, politicians and journalists took pains to avoid referring to German military operations as “war.” Guttenberg was not so shy. “Our engagement in Afghanistan has for years been a combat operation,” he told Bild. “But the feeling is—and not just among our troops—that the Taliban is waging a war against the soldiers of the international community.”

Though it was merely a change in terminology, the defense minister’s words made headlines throughout the country. To this day, his words are branded in the memories of many citizens and reporters. Beyond breaking a German taboo, his words signaled a turning point in German post-World War ii history. Previously, Germans had been timid to engage in any kind of warfare and certainly to publicly state as much. Guttenberg’s words sparked a change in that mentality. German soldiers and citizens celebrated his willingness to speak out, and his words enabled Germans to begin leaving behind their postwar timidity.

As defense minister, Guttenberg also dramatically changed the makeup of the German Army. Under his command, the Bundeswehr was transformed from a conscription army to a professional force. The larger, conscripted army was intended to provide Germany with the ability to protect itself against a possible Russian invasion. The purpose of the smaller, better-trained professional force is to give Germany the ability to conduct foreign missions.

Guttenberg has a long-term view that goes beyond merely defending German borders from a worst-case-scenario Russian onslaught. His vision is for a globally deployed, well-trained German Army.

Guttenberg’s latest comments may be controversial, but the call for Germany to stop using its history as an excuse to let others do the “dirty work” has become common. More and more are demanding that Germany let go of its history and deploy its military to contribute to the security of the world.

It has already contributed militarily in various regions in the Middle East. And it has a unique opportunity to intervene in Syria.

There are multiple arguments for German involvement: the atrocities committed by the Syrian regime, Germany’s strategic location, its membership in nato. Moreover, Germans are personally affected by what happens in Syria, since millions of Syrians are seeking refuge in Europe. Germany not only has the means to strike Assad militarily but also has the economic power to rebuild Syria.

The Syrian minister of economy said in 2017 that his hope in the rebuilding of Syria lies in Germany. The Deutsche Presse-Agentur GmbH commented on this in an article titled “Syria Eyes Postwar Germany for $200-Billion-Dollar Reconstruction”:

Even with the civil war still raging in much of Syria, the government in Damascus is already shaping its reconstruction plans. German companies are seen as ideal partners with their reputation for quality and technical expertise, but also because of the country’s huge experience of rebuilding from the ashes of World War ii.

Even the population in Syria cries out for German intervention, as interviews conducted by Bild show. The paper quoted one Syrian who said, “We know that Germany helped many Syrian refugees. But it should not be forgotten how many people still suffer here.”

Guttenberg may be sincere in his humanitarian reasons for intervening in Syria. But Germany has some important, self-interested reasons to get involved.

The nation’s most direct interest in Syria is closely related to the migrant crisis. Europe’s entire political system is being destabilized by the millions of migrants who have escaped from Syria. This mass migration is overloading the government, costing enormous sums of money, diluting European culture and allowing terrorists to enter more easily.

Germany is also concerned about the leverage Syria affords to Iran. Through its relationship with Syria, Iranian warships and troops have access to the strategic Mediterranean Sea. Iran, the world’s number-one sponsor of terror has pushed hard against Europe, and part of its strength to do so comes from having Assad’s regime controlling Syria.

The Bible prophesies that Iran and radical Islam will continue to push against Catholic Europe until the two erupt into open warfare. Daniel 8 and 11 prophesy of the emergence of a strong leader in Germany. The Trumpet has openly stated that this leader is most likely Guttenberg.

These prophecies say this strongman will lead Europe to war in the Middle East—confronting “the king of south” (which the Trumpet identifies as radical Islam, led by Iran). Now Guttenberg is calling for Germany to go to war in Syria.

In February 2010, shortly after Guttenberg called Germany’s involvement in Afghanistan a war, Trumpet editor in chief Gerald Flurry wrote: “Baron Guttenberg calls war and terrorism what they really are—not vague or deceptive ‘euphemisms.’ That makes the German military ecstatic. At the same time, he is swinging the German population into a military mindset. That has to be extremely disturbing to those people who understand Germany’s history.”

This, Mr. Flurry wrote, “signals a dangerous turn in Germany’s foreign policy! And the whole world is going to be greatly impacted by that new direction. … Watch Baron Guttenberg!”

Eight years later, Guttenberg is out office, but he is still making waves. Continue to watch this man closely, and read our free booklet A Strong German Leader Is Imminent. It outlines the biblical prophecies about this strong leader in Europe and it gives the background you need as you watch Guttenberg and Germany.