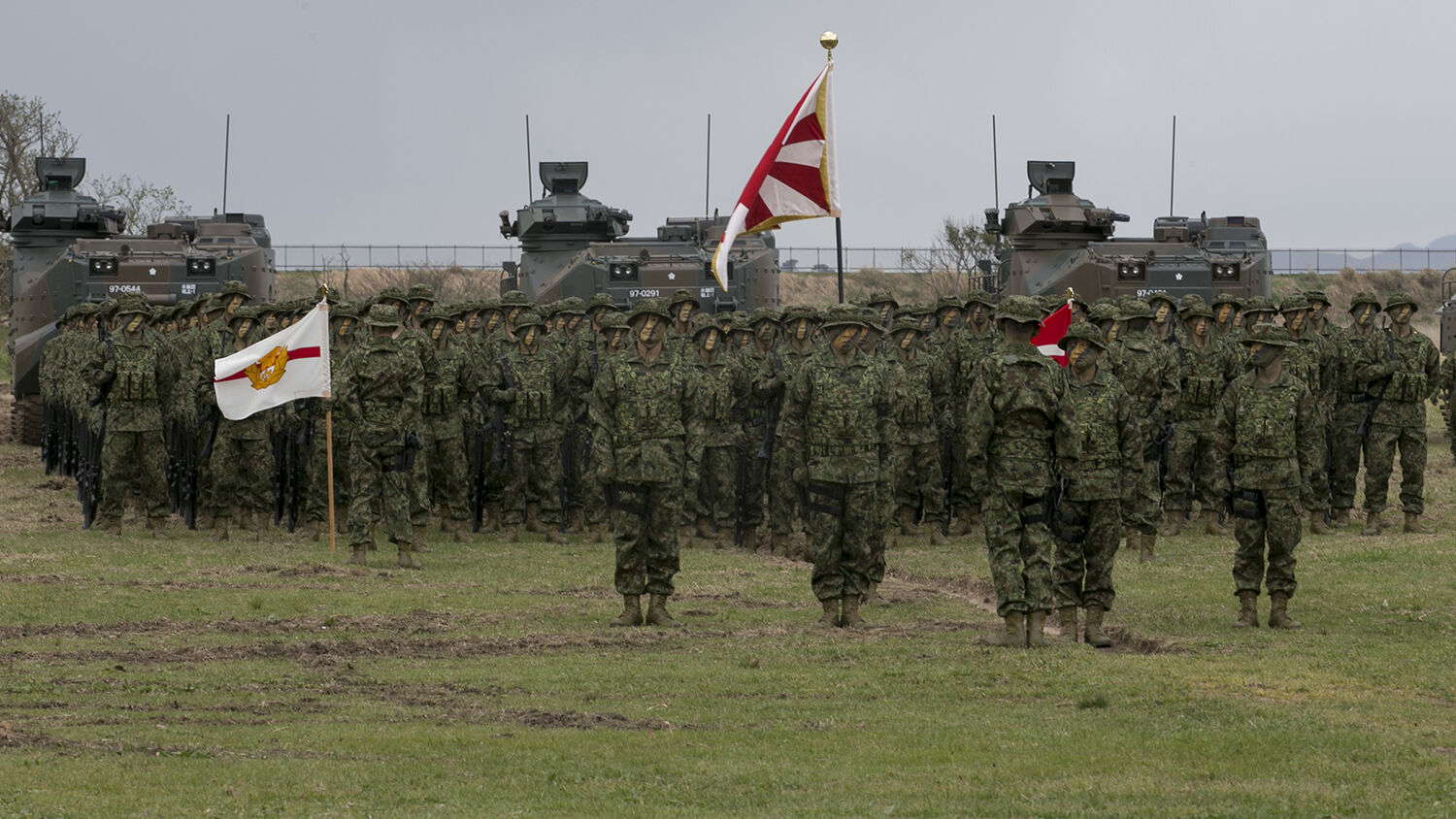 ‘Militarism is again rearing its ugly head in Japan.’

For the first time since World War ii, Japan has commissioned a special marine unit capable of projecting military force in the East China Sea and possibly beyond. During a ceremony marking the establishment of the Amphibious Rapid Deployment Brigade (ardb) on April 7, a senior official from the Japanese Defense Ministry said the marine unit “will show to the international society our firm resolve to defend our islands.”

About 1,500 of those marines did just that when they simulated an attack to recapture one of Japan’s East China Sea islands from invaders. Some American marines also participated in the military exercise.

The ardb will consist of up to 3,000 personnel. Reuters reported that the activation of the ardb “takes Japan a step closer to creating a force similar to a U.S. Marine Expeditionary Unit (meu) able to plan and execute operations at sea far from its home base.” Reuters then quoted Grant Newsham, a research fellow at the Japan Forum for Strategic Studies, as saying, “If Japan put its mind to it, within a year or year and a half, it could have a reasonable capability.”

This is a dramatic development, considering that Japan’s post-World War ii pacifist Constitution allowed only defensive military units and explicitly forbade the formation of offensive ones. The development is not surprising, however, because Japan has been slowly slipping off the pacifist restraints imposed after World War ii. The Trumpet has been watching this trend for three decades now.

More than 80 years ago, Japan unleashed one of the finest amphibious fighting forces in history, going toe to toe with the Americans in the Pacific and very nearly prevailing. But the country had gone without a dedicated amphibious force in the decades since—until last weekend. … The move is just part of the largest overhaul of the Japan Ground Self-Defense Force since its founding in 1954.

During the April 7 ceremony, one Japanese defense official said, “Given the increasingly difficult defense and security situation surrounding Japan, defense of our islands has become a critical mandate.” He likely was referring primarily to North Korea’s belligerence in the region and China’s military aggression in the South China Sea and the East China Sea. Japan and China have conflicting territorial claims in those waters. This territory is especially critical for Japan because of its heavy economic dependence on maritime import and export routes.

Japan’s fear of aggression from some of its Asian neighbors and its response is, paradoxically, striking fear in nearby Asian nations—particularly China.

China’s state-run People’s Daily newspaper wrote on April 9: “Militarism is again rearing its ugly head in Japan.” Another state-run newspaper, the Global Times, wrote that Japan’s newly established marine unit is part of its “excuse to revive militarism,” and said, “Asia needs to be wary of militarism revival in Japan.”

Actually, the whole world needs to be wary of Japan’s militarism revival.

“Today, animosity and distrust linger between the peoples of Japan and China,” we wrote in “Why the Trumpet Watches Japan’s March Toward Militarism.” But Bible prophecy indicates that Japan could lay aside its differences with China and join it to fight against a bigger and more threatening foe. “In such a scenario, it’s easy to see that the survival instinct would prompt the Japanese people to humble themselves before the Chinese … and to lend their burgeoning military might to [an Asian axis]. They would do so based on the belief that the alliance would be only temporary” (ibid.).

Keep watching Japan’s march toward offensive militarism. Much of the international community will encourage it, partly because of the military aggression of other nations in Japan’s neighborhood. This is a major step toward the formation of what the Bible says will be the largest army ever amassed by man.