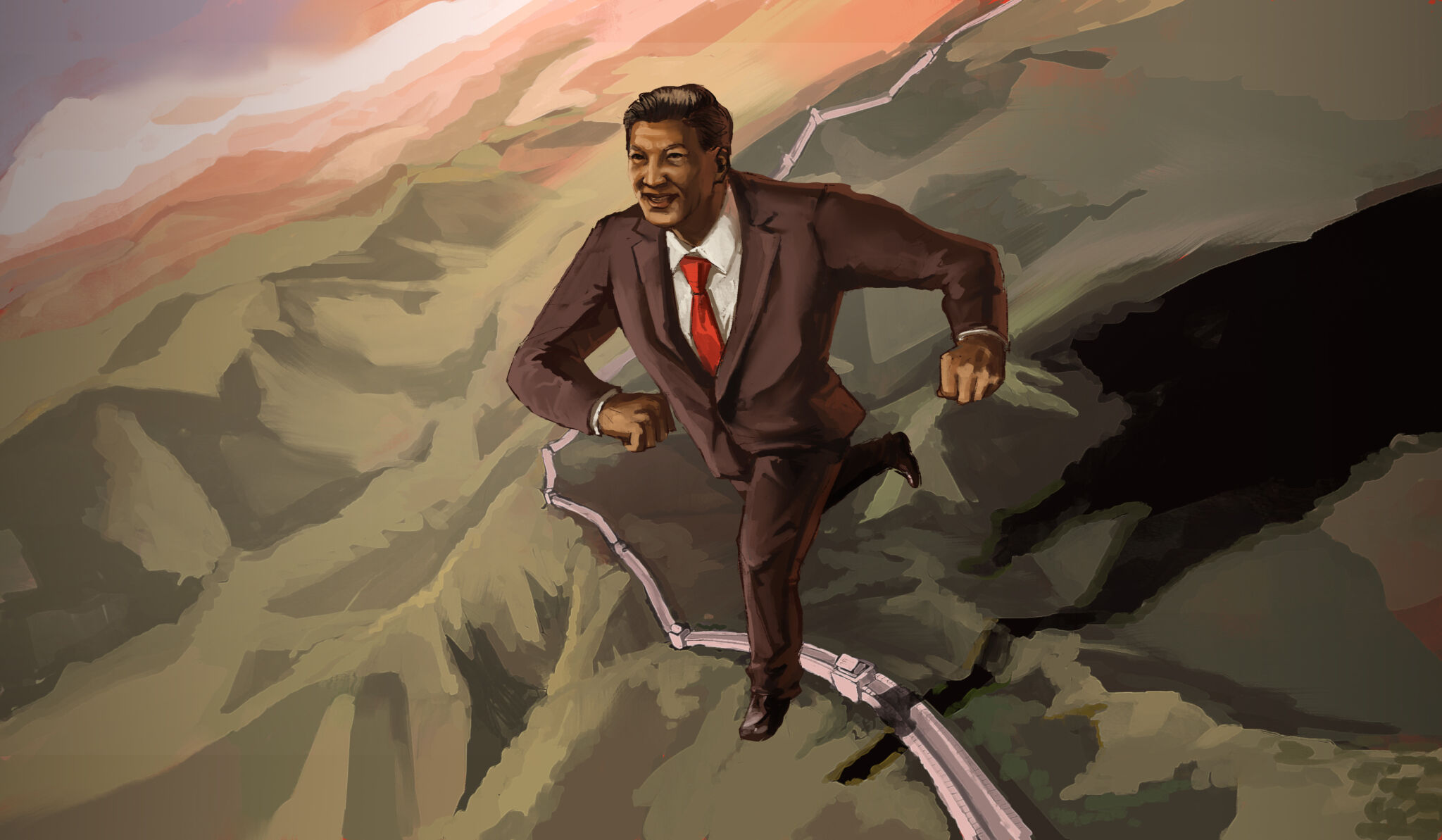 Xi Jinping’s power grab places the might of the world’s most populous nation in the hands of one (ambitious) man.

From the May-June 2018 Trumpet Print Edition

The announcement from Beijing on February 25 was a bombshell. China’s ruling Communist Party said it would abolish a constitutional clause that limits presidential service to two terms. The move enables President Xi Jinping, already China’s most powerful leader in decades, to rule the country indefinitely.

Two weeks later, China’s largely ceremonial parliament approved the proposal with a vote of 2,959 to 2, with three abstentions, deleting the clause stating that the president and vice president “shall serve no more than two consecutive terms.”

President Xi came to power in 2013. Before the constitutional change, he would have had to leave office in 2023, after his second five-year term ends. But now he can continue ruling the second-largest economy and the largest national population in the world for as long as he lives.

Regardless of the constitutional revision, Xi, 64, can retain his positions as leader of both the Communist Party and the military indefinitely. The constitutional term limits pertained strictly to the office of president, which is inherently less powerful than the two other posts. But retaining the presidency, perhaps for life, consolidates his power completely and makes him what many Chinese refer to as “the paramount leader.”

It may be too late for the people of China to stop their nation’s great leap into authoritarianism.

With Xi holding the trinity of top posts, his authority is unquestioned, unchecked and undivided.

This has alarming implications for the future of China and the world.

In the Absence of Power Limits

The presidential two-term limit was established in 1982 by Chinese leader Deng Xiaoping. It was put in place, along with other checks on presidential power, in an effort to prevent China from ever returning to the era of chaos it had suffered under Deng’s predecessor, Mao Zedong.

Mao founded the People’s Republic of China in 1949. He ruled the nation with almost godlike status for nearly three decades. He brought an end to generations of civil clashes and disorder that prevailed when foreign powers ruled, and he prepared China for its return to international relevance.

But Mao accomplished much of his agenda with endless purges and such catastrophic campaigns as the Great Leap Forward and the Cultural Revolution. He demonstrated an utter disregard for human life. His disastrous and cold-blooded leadership killed tens of millions of Chinese. The only force that brought an end to his rule was his death in 1976 at age 82.

There were no term limits for Chairman Mao, and few meaningful limits on his power. He was accountable to no one and scornful of all advice. The combination of his ruthlessness, incompetence and disdain for counsel made his rule incomparably tragic. Mao’s name is etched in history as the man responsible for the deaths of more people than any other individual.

His rule “ranks alongside the gulags and the Holocaust as one of the three greatest events of the 20th century,” said historian Frank Dikötter. “It was like [Cambodian Communist dictator] Pol Pot’s genocide multiplied 20 times over.”

Some Chinese are voicing alarm about Xi’s abolishment of term limits and his moves toward authoritarianism. Li Datong, a former editor for the state-run China Youth Daily, lived through the Maoist era. In a February 26 letter posted in a private group on China’s WeChat phone messaging app, he wrote: “It was the highest and most effective legal restriction meant to prevent autocracy or putting individuals above the party and the state. Lifting the term limits of national leaders will be ridiculed by civilized nations all over the world and also sow the seeds of chaos for China.”

But China’s propaganda machine shifted into overdrive to counter such criticism. WeChat users who attempted to share Li’s letter had their posts blocked. The government has completely blocked dozens of words and phrases on social media, including “disagree,” “personality cult,” “emigrate,” “immortality,” “my emperor,” “lifelong” and “Xi Zedong,” a fusion of Xi Jinping and Mao Zedong.

Within China, the critics of Xi’s power grab do not appear to be numerous. And this heavy-handed Internet censorship may be enough to keep the criticism from spreading.

Even before the latest power grab, Xi had little patience for disagreement, and he often countered it with force.

During his first five years, instead of maintaining the “first among equals” style of leadership used by his recent predecessors, he adopted a strongman approach. He bypassed State Council authorities by forming policymaking party groups, many of which he chairs himself. He took personal control of writing policy on everything from China’s economy and international relations to its environmental strategies and Internet regulations. He implemented painful military reforms that positioned him as unchallenged commander in chief of China’s enormous People’s Liberation Army.

These moves placed Xi at the center of what Time’s Hannah Beech called “a personality cult not seen in the People’s Republic since the days when frenzied Red Guards cheered Chairman Mao’s launch of the Cultural Revolution” (March 31, 2016).

Retaining the presidency, perhaps for life, consolidates Xi’s power completely and makes him what many Chinese refer to as “the paramount leader.”

Most of China Supports Xi’s Rise

Li Datong and other Chinese openly decry Xi’s lurch toward indefinite one-man rule. But the Communist Party and most Chinese support the move.

In fact, Xi’s rapid ascent and his move to scrap term limits could not have happened without the full consent and assistance of Communist Party leadership.

The Chinese elite and many ordinary citizens see that the global order is unraveling. They see the rise of extremist parties in Europe. They see the so-called stable democracies destabilizing. They see American power declining and leadership vacuums opening up. They see that the international stage is primed for conflict, and they see a chance for China to take advantage of the volatility and emerge as a superpower.

Chinese top leaders recognize that for their nation to become a superpower it needs a ruler whose hands are not bound by red tape and who is not limited by checks and balances. They need a strongman who is free of political encumbrances and capable of decisive actions. They need a new Mao.

These sentiments led Communist Party elite to allow Xi to rise so rapidly and so high. Now these same sentiments compel the Chinese people to support Xi as emperor for life.

The World Should Be Alarmed

Xi’s abolition of term limits and leap toward autocracy also has major implications outside of China and for the global order.

Under Mao, China was a military lightweight. This meant that although his ambitions wrought havoc on hundreds of millions, they rarely spilled over China’s borders in a significant way.

But in recent years, China’s military has become a formidable force.

Under the streamlined leadership of a man who vowed last year to make China “stand taller and firmer in the world,” such a military should be taken seriously.

Even before the constitutional revision, President Xi led China on a path of international belligerence, grabbing territory from its neighbors and exerting illegal control over vital international waters.

Now that Xi is positioned essentially as China’s emperor for life, and since the Communist Party and most of the country’s population support him, the world should expect China to become even more aggressive on the international stage.

The Trumpet watches Xi’s tightening grip on power because Bible prophecy reveals that as America’s influence on the global stage diminishes, two power blocs will emerge. One will be a European bloc functioning in the tradition of the Holy Roman Empire. The other will be an Asian entity called in Scripture “the kings of the east,” headed by Russia, with China in a secondary leadership position. The Bible makes plain—in such chapters as Jeremiah 50, Daniel 11 and 12, Revelation 16 and Matthew 24—that a clash between this European power and this Russo-Chinese-led bloc will play a major role in the most violent conflict in human history.

The fact that Xi can now rule for as long as he lives is deeply significant. His ongoing rise and increasing control over China’s military and foreign policy is vital to watch. It indicates how the Chinese president could join forces with his fellow strongman in Russia and how China will be brought on its prophesied collision course with Europe. The February 25 announcement about scrapping term limits also indicates how near this future clash could be.

Although this points to a dark time in the near term, that time will be closely followed by the brightest imaginable future!

As Trumpet editor in chief Gerald Flurry writes in his booklet The Prophesied ‘Prince of Russia’: “This immense war between European and Asian forces will end in the return of Jesus Christ! … The conclusion of that battle will mark the beginning of a peaceful and prosperous new age for the entire Earth!”

At that time, for the peoples of China and the whole world, an era of true stability and abundant, joyous living will begin.

To learn what Bible prophecy says is in store for China, request a free copy of Russia and China in Prophecy.