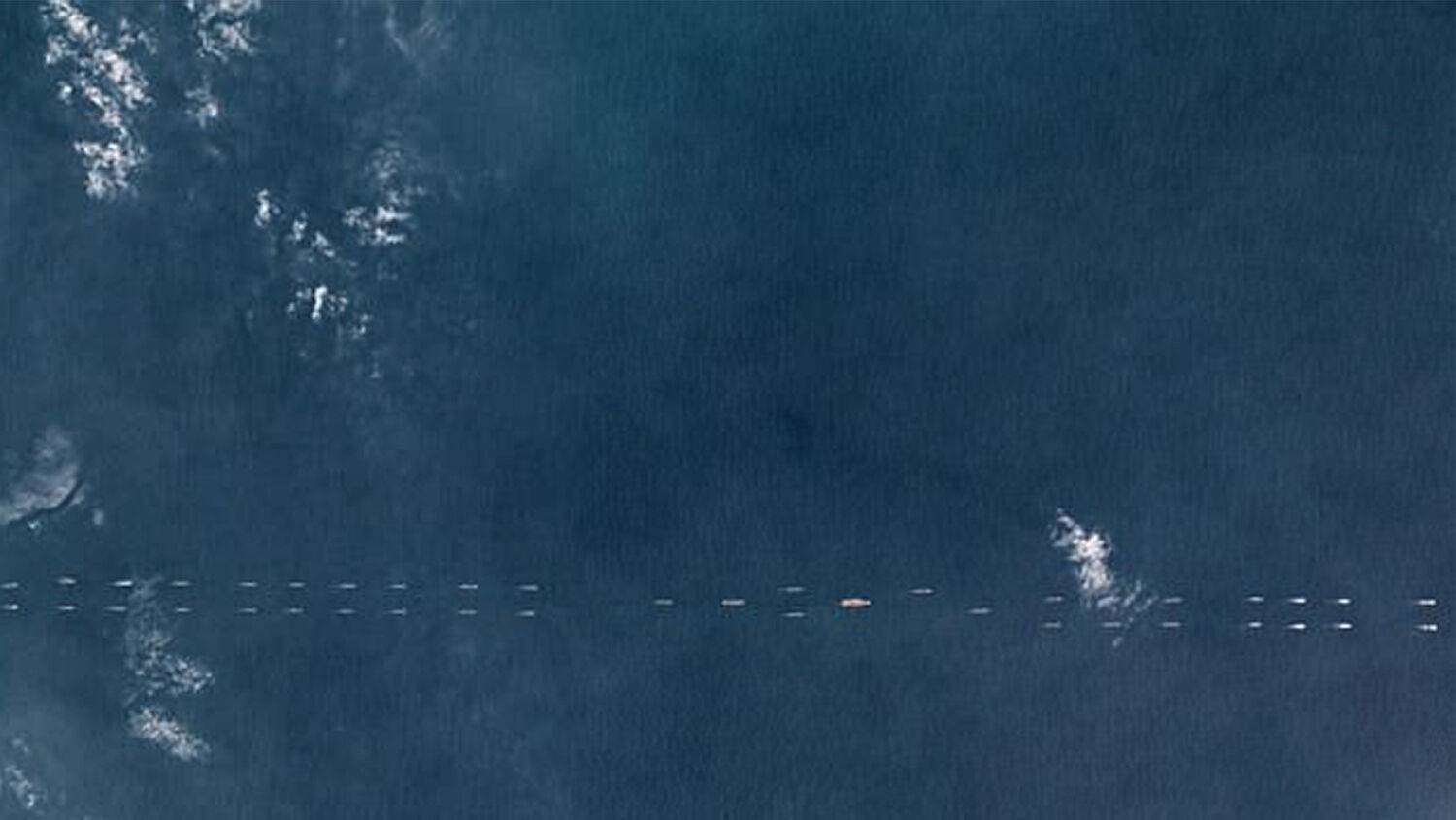 This satellite photo provided as a handout from Planet Labs shows at least 40 Chinese ships and submarines south of Hainan, China.
Planet Labs/Handout

Satellite imagery captured March 26 revealed what analysts have described as an unusually large display of Chinese naval warships in the hotly disputed South China Sea. The images, provided by Planet Labs, show China’s sole aircraft carrier, the Liaoning, sailing in formation with at least 40 submarines, destroyers, frigates and other ships.

These naval exercises come nearly four weeks after Chinese President Xi Jinping formalized his power to govern without term limits and one week after he announced that his nation was ready to wage “bloody battles” to retain its perceived superpower status.

The Chinese Defense Ministry said the exercises were “normal and routine” and that they don’t “target any certain country or party,” but this is dubious.

En route to the South China Sea for the exercises, the Liaoning carrier group sailed from its home port in northeastern China through the Taiwan Strait. The close proximity of the warships and their accompanying warplanes prompted Taiwan to scramble fighter jets in response. China not only continues to claim sovereignty over Taiwan but also claims the same waters of the South China Sea that Taiwan claims.

Vietnam also claims parts of the South China Sea. China recently pressured Vietnam to stop oil exploration off its coast. Its military exercises are intended to send a strong message to that nation as well.

In early March, the uss Carl Vinson sailed to Vietnam, marking the first time an aircraft carrier from the United States Navy has visited the country in more than 40 years. Later that month, the uss Mustin conducted a Freedom of Navigation exercise near one of China’s artificial islands in the Spratlys archipelago. China condemned the operation as a “serious political and military provocation.” Yue Gang, a Chinese expert and former official in the People’s Liberation Army, was quoted by the Financial Times as saying, “The U.S. aircraft carrier has stayed long within this region. China now is showing that it’s not afraid.”

Japan and Britain have also recently deployed warships in the region.

Collin Koh, a security expert at Singapore’s S. Rajaratnam School of International Studies, spoke to cnn about China’s naval exercises involving the Liaoning. “This show of force is not just to symbolize that China is ready to fight. There is a lot more resolute determination on the part of China to push the military to much greater degrees of readiness,” he said “[T]his is the new normal, and this will not be a one-off show of force.”

Over $5.3 trillion in maritime cargo passes through the South China Sea each year, equating to roughly one third of global maritime trade. America has controlled and defended this vital sea-lane for decades, but now China is challenging that control.

The Liaoning’s display of potential force comes after China has built illegal and controversial artificial islands in disputed waters, has claimed sovereignty over other disputed islands, has become increasingly aggressive with its fishing fleets, and has increased its influence over vital sea gates beyond the South China Sea.

Whoever controls the South China Sea controls one third of the world’s maritime commerce—so this is an issue that will directly affect the economy and the security of the United States and many other countries.

Trumpet editor in chief Gerald Flurry wrote about the importance of the South China Sea in his 2016 article “China Is Steering the World Toward War.” He noted, “What is happening today is very much like what happened in Southeast Asia in the 1940s under Imperial Japan. Emperor Hirohito and Prime Minister Hideki Tojo tried to draw the nations of Southeast Asia into a Greater East Asia Co-Prosperity Sphere so they could force Western influence out of Asia.” China is already gaining economic and political control over areas such as Singapore that the Japanese Empire had to fight for during World War ii.

Bible prophecy warns that we should watch this region closely. Mr. Flurry continued:

This warning is not just for an ancient nation. It is a prophecy for the modern-day descendants of Israel! Two nations in particular represent Israel in this end time: America and Britain. …

You can already see this prophecy moving toward its fulfillment: The European Union is moving into South America, making trade agreements that are taking business away from the United States. Russia and China are militarizing the most important trade routes traversing the Asian continent.

This prophecy is being fulfilled before our eyes! America’s enemies are securing shipping lanes and creating economic alliances that will very soon enable them to choke off America’s supply lines. Soon America will find it impossible to import oil and other necessities.

This is where China’s rise in this region is leading. For more on this vital subject, read “China Is Steering the World Toward War.”