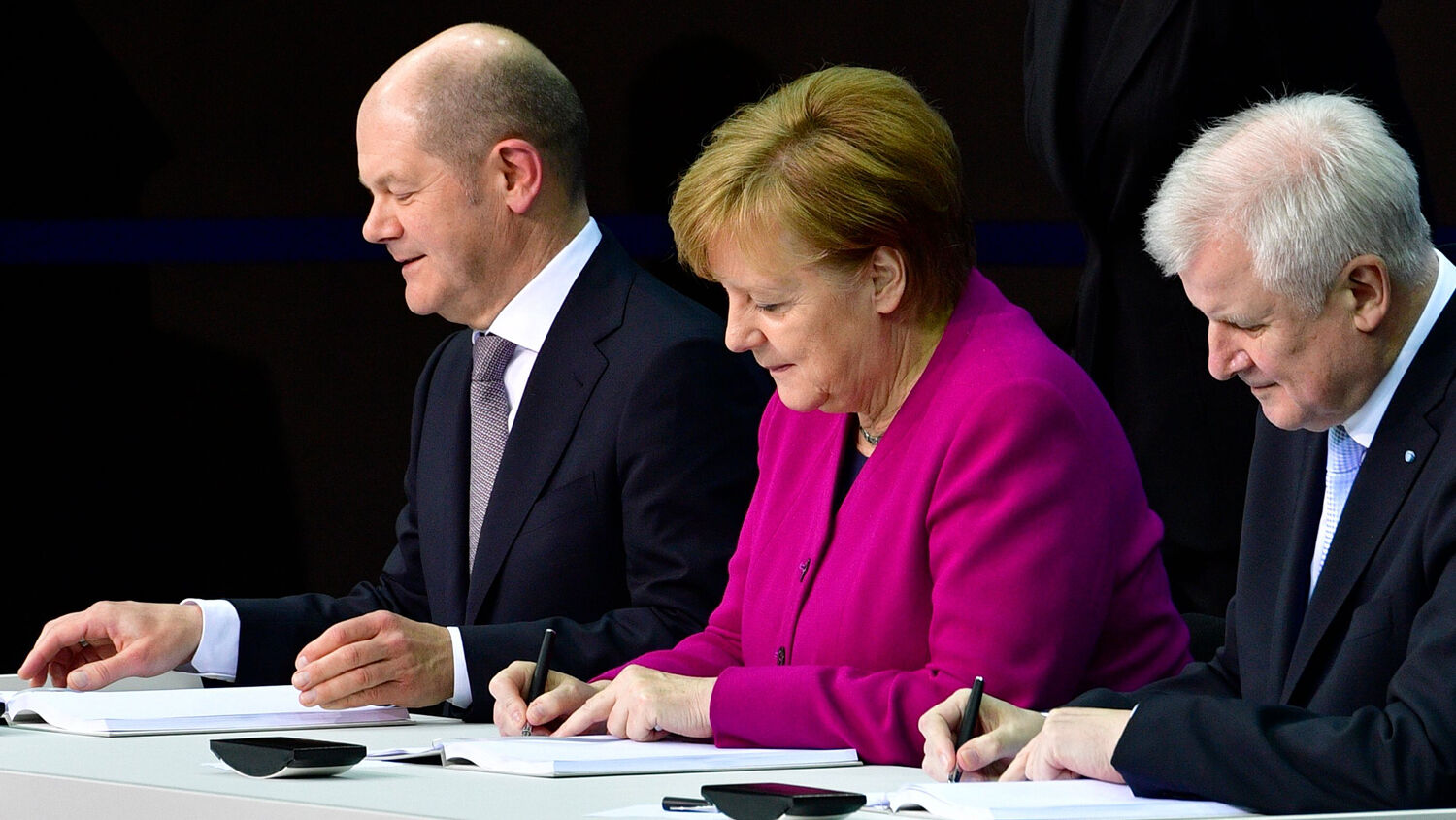 (From left) Designated Finance Minister and Vice Chancellor Olaf Scholz of the spd, Chancellor Angela Merkel of the cdu and designated Interior Minister Horst Seehofer of the csu sign the coalition treaty on March 12 to form a new federal government.
JOHN MACDOUGALL/AFP/Getty Images

Germany’s months without a stable government are about to end, but its problems are certain to continue.

After months of uncertainty, Europe sighed with relief on March 4. Germany’s Christian Democratic Union (cdu) and Social Democratic Party (spd) agreed to form another grand coalition government. spd voters approved the newly written coalition contract with 66 percent in favor. If all goes according to plan, the new government will be sworn in on March 14.

But the formation of the coalition does not end Germany’s political dilemma. The parties now have to work together to govern as Germany’s and Europe’s pressing problems stare them in the face.

Can such a sharply divided government solve the nation’s historic challenges?

The last several months have shown that the rest of Europe depends on German leadership. Germany needs a strong government to face the international challenges that lie ahead, as well as its own domestic issues. But its governing parties lack unity, leadership and the support of the people.

In each of the three parties that are about to enter the coalition government, the top party leaders have lost significant power. Germany may give the impression that it has finally achieved a stable government, but internally it is in a desperate leadership crisis. How can these parties lead the nation when they themselves are badly disunited?

The strongest party in the coalition is the Christian Democratic Union, directed by Chancellor Angela Merkel. But rebels within are rising and dividing the party.

The cdu is divided into two camps: the conservatives and those who are more liberal. Under Merkel’s leadership, the party moved more and more to the political center. For years, Merkel has been able to please the conservatives and prevent any uprising from diminishing her power. However, Europe’s ongoing refugee crisis has changed this dramatically. She now faces strong opposition from the conservatives, especially over immigration. But no one has been willing to openly rebel against her—so far. But her days as leader are numbered—it’s just a question of how big or small that number is—and the cdu is already planning for the post-Merkel world.

Merkel has lost support not only within her own party but also among her coalition partners. Commentators and politicians in the cdu expect her new term as chancellor to be short-lived.

The cdu’s sister party is the Christian Social Union (csu) in the state of Bavaria. Horst Seehofer is the party leader of the csu and the premier of Bavaria. But his power has significantly diminished and he feared devastating results in Bavaria’s state election this fall. So Seehofer announced that he would resign as premier of Bavaria. The new premier will be another prominent member of the csu, Markus Söder. But Seehofer will maintain leadership of the csu in Berlin.

Seehofer and Söder have been struggling for leadership of the csu and Bavaria for years. Seehofer’s power circle had been strong enough to prevent the rise of any successor, but the all-time low result in the 2017 federal election turned the tables in Söder’s favor. But Söder did not have enough support of his own to completely dethrone Seehofer. Seehofer will hand Söder the premiership, but will retain leadership of the csu. Bavaria is now divided between two rivals.

Historically, with only a couple exceptions, the csu has been the sole party to govern Bavaria. But that legacy is again under threat if the party receives another devastating election result like it did in September’s federal election. Such a defeat would throw the party into turmoil.

But the coalition party suffering the worst political crisis is the Social Democratic Party. The party has joined Merkel in a grand coalition before. It was dominated by Merkel’s cdu/csu, and its popularity plummeted. Sigmar Gabriel handed leadership of the party over to Martin Schulz ahead of the September federal election. Gabriel then became Germany’s foreign minister.

Schulz, who is a former president of the European Parliament, was seen as the spd’s new hope. But when the euphoria died down and voters cast their ballots in the federal election, the spd faced a shocking reality. It won only 20 percent of the vote: Its worst result since the end of World War ii.

The spd has lost so many supporters and the right-wing Alternative für Deutschland (AfD) has gained so many supporters, that the AfD, which many consider extremist, is now more popular according to some polls.

Schulz said he recognized that the voters who ditched the spd were sending it a message, and he said the party would not enter into another grand coalition with the cdu/csu. But after coalition negotiations between the cdu/csu, the Free Democratic Party and the Green Party failed, the spd was persuaded to give the grand coalition another try. Schulz broke his promise, gave up the party leadership, and announced that he would serve as foreign minister in the grand coalition government. Former party chief Gabriel received the news with great displeasure, and after a public dispute and internal party pressure, Schulz gave up the foreign minister post as well and departed from the political arena.

The spd turned its leadership over to Hamburg First Mayor Olaf Scholz as acting chairman. He currently shares spd leadership with Andrea Nahles, leader of the party’s parliamentary group. In the new government that will be sworn in on March 14, Scholz will serve as vice chancellor and finance minister.

Another coalition partner, another party in major turmoil.

Germany’s traditional parties are struggling to keep their heads above water. The three parties are endeavoring to push their own agenda through to please their voters. This nearly caused the coalition negotiations to fail and will make governing more difficult.

Germany’s political turmoil is far from over. The new government lacks unity and will struggle to solve the problems facing the nation and Europe as a whole. The refugee crisis is still boiling in the Middle East, the financial crises in Europe could escalate at any moment, and all eyes rest on Germany.

But how can Germany’s new government lead Europe through the challenges of 2018 if it can’t even govern itself? Germany is caught in a desperate leadership crisis. This crisis will drastically transform Germany.

Germans are crying out for change but remain unheard. Europe cries out for leadership, but Germany responds reluctantly. But Bible prophecy shows that the people’s and Europe’s cries will be heard. It will be in the midst of political turmoil, such as we see today, that Germany’s strongman will arise.

Trumpet editor in chief Gerald Flurry writes in his booklet A Strong German Leader Is Imminent, “Daniel 11:21 prophesies that this strong leader will come into power ‘by flatteries’—probably not by votes, but through a coalition government of some kind. We need to watch Germany and Europe carefully. Although Bible prophecy gives us the outline of how it will unfold, we don’t know the details.”

It would be wrong to think that the formation of Germany’s coalition will end the nation’s political turmoil. The coming weeks will show that the problems will only increase. Keep your eyes on Germany and you will find the Trumpet’s warning to be true.