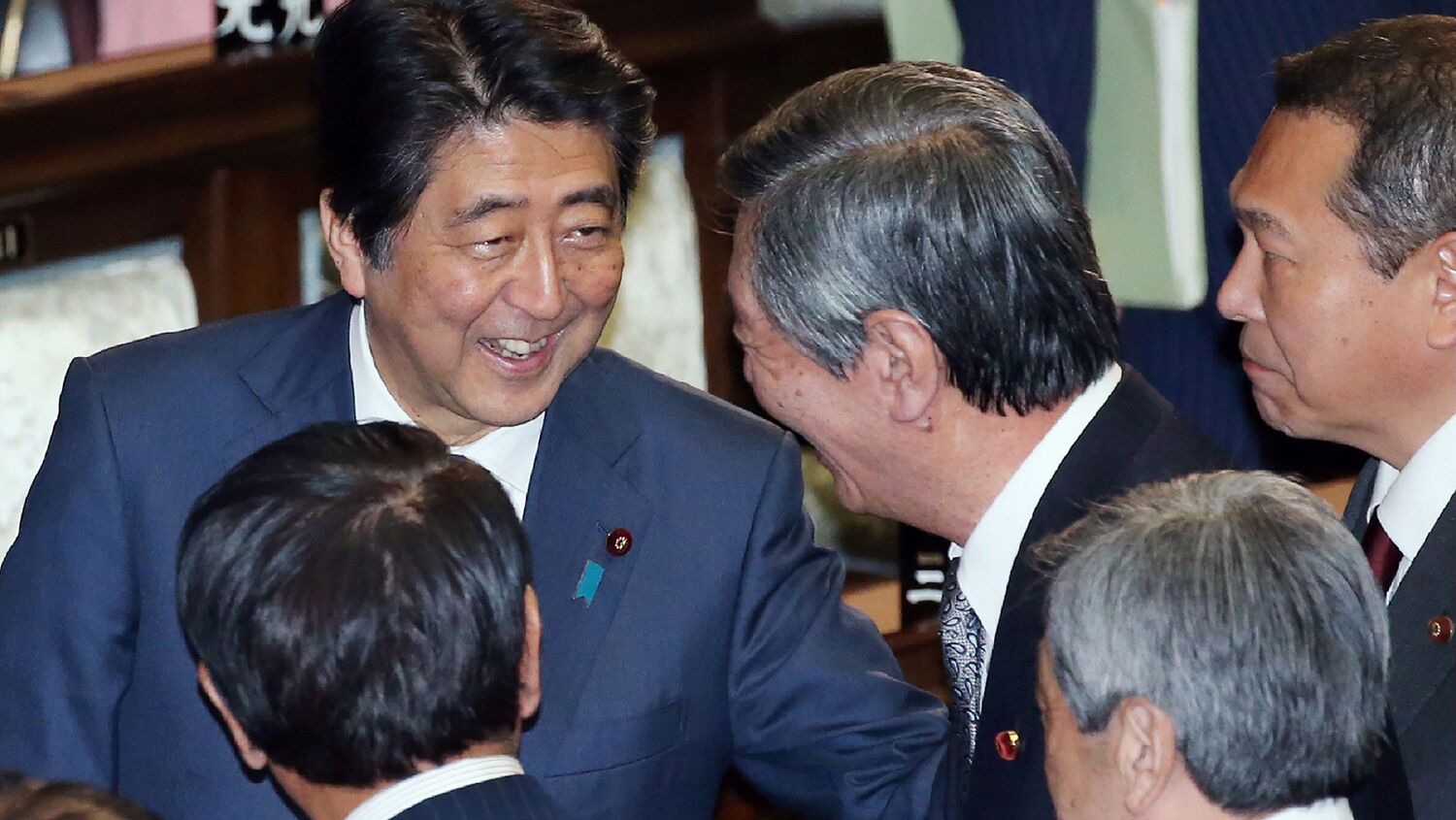 Japanese Prime Minister Shinzo Abe and other lawmakers congratulate each other after the Trans-Pacific Partnership free-trade deal passed in Tokyo’s lower house of parliament on Nov. 10, 2016.
JIJI PRESS/AFP/Getty Images

As America pulls back, Japan is filling a major economic void.

When United States President Donald Trump came to office in 2017, one of his first acts was to remove the U.S. from the Trans-Pacific Partnership (tpp) trade deal.

The tpp had been promoted to the public as a way of strengthening relations among Pacific Rim nations and a means of countering China economically. But the tpp, like many other “free trade” agreements, was actually more about government control and over-regulation than about economic freedom.

Without the U.S., the remaining 11 nations had decisions to make. Some wanted to salvage the tpp by rewriting its terms, while others wanted to just walk away from it. The nation that was the key decision maker, with the largest economy of the bloc, was Japan.

For Japan, this was a rare opportunity. Since the end of World War ii, Japan has tied itself to the U.S. in many of its endeavors. It has refused to participate in initiatives that excluded the U.S., such as the East Asia Economic Caucus, and has kept the Americans engaged in the Pacific by supporting U.S.-inclusive forums, such as the Asia-Pacific Economic Cooperation and East Asia Summit.

But with America exiting the tpp, Japan went from junior partner to senior partner. Japan’s lead trade negotiator, Kazuyoshi Umemoto, said, “This was the first time for Japan to take a leading role in any kind of trade negotiations.”

Japan embraced the role and decided to forge ahead on a new Pacific trade agreement. In July 2017, trade negotiators from the remaining 11 nations went to Japan to begin working on a new deal based on modifying the old framework. The result is the Comprehensive and Progressive Agreement for Trans-Pacific Partnership (cptpp): It is scheduled to be signed on March 8 in Chile.

Once again, the United States finds itself outside of another trade deal. While President Trump may have been right in principle to pull out of the deal, the U.S. will still suffer the consequences. The president recently spoke of the possibility of the U.S. joining the cptpp, if the terms were renegotiated to favor America. However, most analysts agree this is unlikely to happen. After he pulled the plug on the first deal that took years to negotiate, member nations are unlikely to want to renegotiate another. More and more, America is finding itself shut out of the global marketplace—a dangerous place to be.

President Trump last week announced his plans to impose a 25 percent tariff on all steel imports. This news sparked an immediate backlash from around the world, and has further weakened America’s position in trade negotiations. America is finding itself shut out of the world trade market because of its protectionist policies.

The cptpp agreement is an example of Japan’s expanding power in Asia. The nation has been slowly stepping out from America’s shadow, thanks in part to America’s retreat. Now Tokyo is putting itself forward as a regional leader and a new counterweight to China. Neither America nor the region seems concerned about its posturing.

Japan’s influence and independence reached a turning point in the past year. It forged ahead on the cptpp without America. It also brokered a trade agreement with the European Union, called the Economic Partnership Agreement. The agreement, completed in December, covers the biggest free-trade area in the world. It accounts for 30 percent of the global gross domestic product.

Having locked up two sizable trade deals, Japan now seems to have its sights on another major trade deal. This time it’s with one of its major competitors: China. At the end of January, a summit between Japan and China concluded with both nations agreeing to improve relations. Norio Maruyama, the spokesman for the Japanese delegation, said the summit could set the stage for visits between Japanese Prime Minister Shinzō Abe and Chinese President Xi Jinping. Because of strained relations, neither leader has visited the other’s country since coming to power.

As relations between the two nations begin to thaw, speculation is rising that China, Japan and South Korea may soon organize the next trilateral summit. Sun Xingjie, a foreign-policy analyst at Jilin University, said one of the main items on the agenda would be a proposed trilateral trade agreement between the three. The Washington Post speculated that Japan could instead begin focusing on the Regional Comprehensive Economic Partnership. This trade agreement is currently being negotiated between the Association of Southeast Asian Nations and Australia, China, India, Japan, New Zealand and South Korea.

Regardless of what specific action it takes moving forward, Japan’s direction is clear: It is stepping forward as a leader in trade, and it is doing so without America.

Japan’s economy is one of the most developed in the world. Although it’s not the biggest, having been overtaken by China in 2010, it is more stable. George Friedman wrote recently at Geopolitical Futures: “The problem for China is that it is unclear if the country can pull off the kind of politically stable economic transition that Japan managed when its high-growth ‘miracle’ ended in the early 1990s.”

China certainly is a dominant force in the region and plays a huge role in the global economy. But it draws much of its strength by feeding stable economic markets. Japan is one of the stable markets that it needs. This makes it advantageous for both nations to strengthen economic relations.

Despite historic and current tensions between the two nations, the Trumpet has consistently forecast that China and Japan will form an alliance. The Trumpet watches for strengthening economic ties. The Plain Truth magazine, the predecessor of the Trumpet, stated in February 1963, “There is an utter inevitability of the ultimate tie-up between Japan and Red China! The big question is how long China will remain ‘Red’ and survive without a tie-up with Japanese capitalism.”

With America setting up trade barriers, China needs other strong markets. Japan could be the perfect partner. At the same time, America is disengaging from Asia. With the growing anti-American sentiment in the region, Japan knows it needs to start making new friends, or it will find itself isolated. It needs new trade alliances to survive.

Japan is returning as a dominant, independent leader in the Pacific region. The last time Japan tried to take independent leadership in Asia, it plunged the region into war. Today, though, it is amassing its powers differently. Our booklet Russia and China in Prophecy states:

This is exactly what we’re seeing play out with all the trade agreements Japan is brokering. With America taking a back seat in world affairs, Japan is left to be the master of its own destiny. Bible prophecy reveals that this will have dangerous consequences. Continue to watch Japan step out from America’s shadow and into a dominant position in Asia. For a greater understanding on these prophecies, read our free booklet Russia and China in Prophecy.