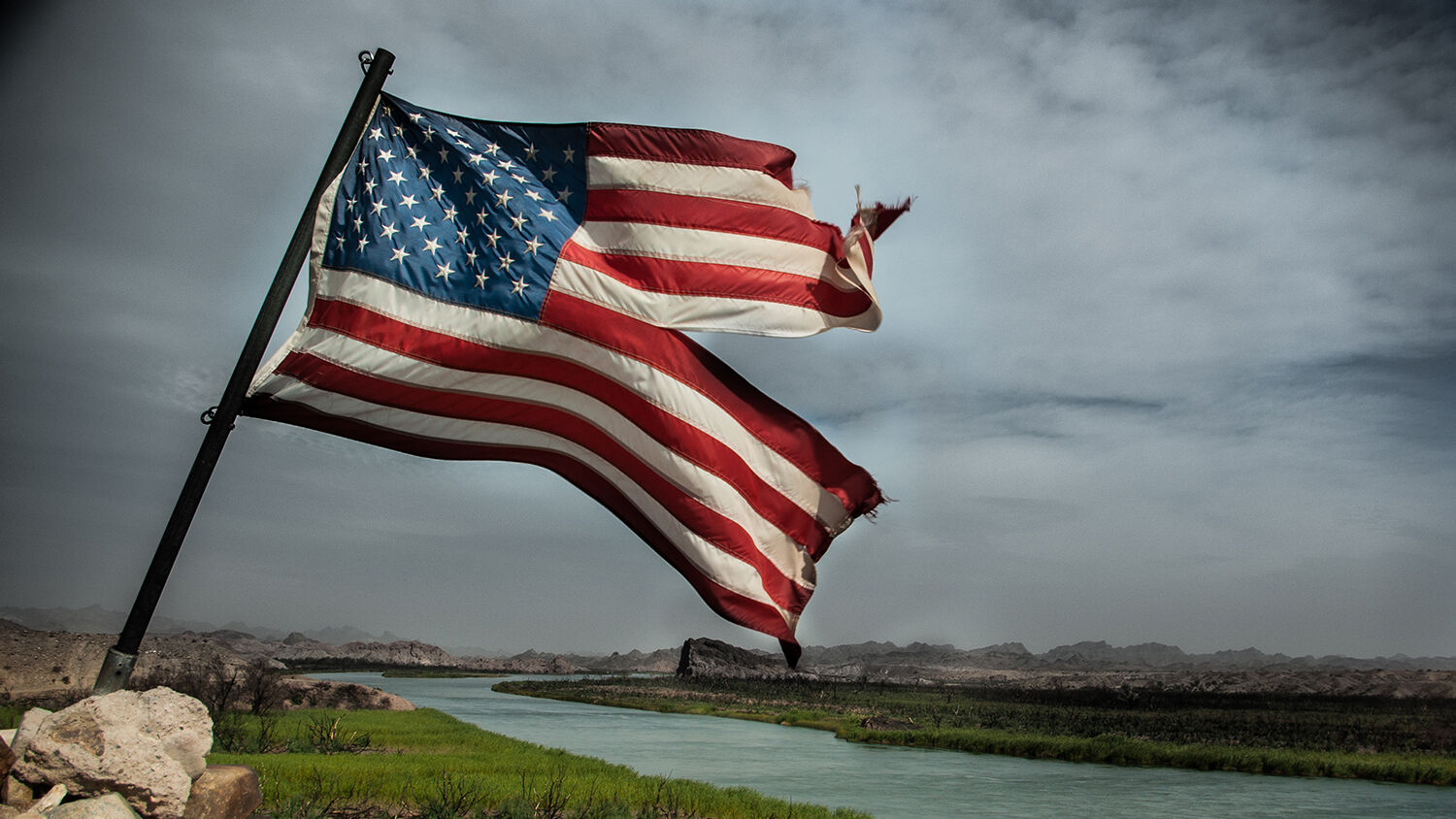 Please take this lesson from Robert Mueller’s investigation to heart.

Who are Americans’ real enemies? Surveying the social and political scene, it seems clear most Americans consider their bitterest foes to be other Americans. We see widening divisions between political parties, between liberal and conservative ideologies, between economic classes, between races, between different religious and moral persuasions, between gun-control advocates and Second Amendment enthusiasts, just to name a few.

This is a childish wish, I know, but I wish all Americans—of every political, ideological, racial and economic stripe—would think seriously about what was confirmed last week by Robert Mueller’s Russia investigation.

It is painful proof that by fighting each other, Americans are playing right into the hands of the nation’s real enemies.

It also teaches an invaluable spiritual lesson, if we will open our eyes to see it.

Last Friday, special counsel Mueller’s grand jury handed down its first indictments in its probe into meddling in America’s last presidential election. They slapped 13 Russian nationals and three Russian businesses with charges of conspiracy to defraud the United States, exposing a multimillion-dollar operation to sow discord in our politics as far back as 2014.

We’ve known a lot of this for months, but these indictments make it official. Russian hackers skillfully leveraged our own social media tools, even our mainstream media, to foment intra-American hatreds.

It’s now all laid bare: thousands of Russian-controlled Twitter accounts spewing out millions of tweets full of polarizing #NeverTrump and #NeverHillary rhetoric; over a thousand YouTube videos on divisive social issues uploaded by Russian agents; Facebook posts devised by Russian saboteurs reaching more than a third of America’s population. We can open the Kremlin’s playbook and see exactly how they used a toxic combination of truth and lies, half-baked accusations and inflammatory insults, to stir up anger, hostility and hate.

By military-spending standards, Russia executed this plan on a modest budget. But several million dollars can buy you a lot of exposure on social media. Russian agents created a lot of their own content, but they also took angry, fringy, conspiratorial posts created by Americans and used money and know-how to blare them to bigger audiences. Americans by the millions became outraged by provocative propaganda served up to them by Russians. Hundreds of thousands of them shared and spread it to millions more, becoming unwitting accomplices in Russia’s effort to weaken and destroy our democracy.

“This is cultural hacking,” said Jonathan Albright, a research director at Columbia University. “They’re feeding outrage—and it’s easy to do, because outrage and emotion is how people share” (New York Times, Oct. 9, 2017).

The Russians have a knack for playing on our fears, amplifying our suspicions, and pushing our buttons. The Times gives examples: To a fake account named “Being Patriotic,” the Russians promoted a fringe story from InfoWars claiming that federal employees were essentially stealing land from private citizens, and added, “The nation can’t trust the federal government anymore. What a disgrace!” To a fake account called “Secured Borders,” it publicized a video falsely accusing the state of Michigan of knowingly distributing welfare benefits to Muslim immigrants with multiple wives. To a fake account called “Blacktivist,” it posted viral videos of police brutality.

Russian organization Internet Research Agency created two Facebook groups, one called “Heart of Texas,” the other called “United Muslims of America.” To the one it spread posts denouncing the spread of Islam in the state—and to the other, posts highlighting discrimination against Muslims. Each of these groups attracted over a quarter of a million followers. Then, after laying all this groundwork, the agents announced a “Stop Islamization of Texas” protest to one group, and a “Save Islamic Knowledge” protest to the other—for the same day, same time, same location. It ended up with real Americans angrily confronting other real Americans in the streets of Houston—while agents at the Kremlin sat back and gleefully watched the fireworks.

They played us perfectly.

The Russians don’t take sides. They don’t care which side is right or wrong, who wins an election, who is president and who is the opposition—as long as America loses.

Shouldn’t we feel some shame? Shouldn’t this stir some remorse for having let foreign antagonists fiddle with our emotions to turn us against our own countrymen? Shouldn’t this be a wake-up call to reunite and redirect our indignation against those who are plainly exposed as trying to sabotage us?

You see Russia operating by the same script with the infamous “Steele dossier.” On the surface it looks like a false report created as a weapon to prevent the election of Donald Trump (and now a weapon to try to impeach him). American agents for the Federal Bureau of Investigation used it to obtain a warrant to surveil a Trump campaign adviser and to trigger an investigation that has dogged this entire presidency. The truth about the origin and use of the dossier has instead exposed partisanship and corruption within the Justice Department and the fbi, discrediting these two pillar law enforcement agencies. Daniel Hoffman, a retired cia station chief who served in the former Soviet Union, wrote in the Wall Street Journal, “The Steele Dossier Fits the Kremlin Playbook”—that it was likely not aimed specifically at Trump, but was “part of a Russian espionage disinformation plot targeting both parties and America’s political process” (emphasis added). “If there is one thing I have learned,” he wrote, after 30 years’ experience observing the Russians, “it’s that Vladimir Putin continues in the Soviet tradition of using disinformation and espionage as foreign-policy tools.”

What brilliant success he has had. And we really have ourselves to blame. The Russians would never be able to do what they did if not for Americans’ shallowness, ignorance, rashness, prejudice, partisanship, disloyalty, and many other weaknesses in our national character that are being exposed! A strong, united America, with its eyes fixed on the facts and the real issues, would be invulnerable to these attacks.

Sadly, there is no evidence that these revelations will inspire a change of heart. If anything, they caused Americans across the spectrum to intensify their accusations and recriminations against one another, against our mainstay institutions and against our president.

Trumpet editor in chief Gerald Flurry has written an important article for our coming April 2018 print issue titled “Nunes Memo Exposes Unseen Threat to America.” (The office of Rep. Devin Nunes authored a memo that exposed the truth about the Steele dossier.) Mr. Flurry makes the strong point that the real enemy of the United States is actually not Russia. It is an evil spirit being: Satan the devil. This article is a must-read, because it brings out this crucial spiritual dimension necessary to understand the real danger to America.

Studying the Russians’ divide-and-conquer tactics as they are unmasked by the Mueller indictments gives tremendous insight into the way the devil works. He is actively destroying this country. He is using every trick, tool and weapon he can to isolate us, break us and shatter us into rivalries. He plays no favorites: He takes every side and no side. Revelation 12:10 calls him “the accuser”; he accuses, maligns and scorns people “day and night.” He intermingles shards of truth and lies to create suspicion and fear, turning people against one another. He stirs us to cast reason aside and act out of pure, baseless emotion, passion and hatred.

The Apostle Paul warned that ignorance of Satan’s devices gives him an advantage over us (2 Corinthians 2:11). Americans are certainly oblivious to his tactics. As a result, the nation is falling right into his trap—and ripping itself apart.

Because of these recent revelations, we can no longer claim ignorance of Russia’s devices. Yet we remain too locked into our divisions against each other to make any changes that would unite us and nullify the damage the Russians are doing to us.

The truth of the Bible is that America is suffering curses right now. For proof, read The United States and Britain in Prophecy, by Herbert W. Armstrong. God is cursing this nation because of our sins. This truth is the most difficult thing to convince Americans of. We are so accustomed to pointing fingers at the other person, assigning blame rather than accepting responsibility, that we will not accept the notion that we are the problem.

Here is a dramatic instance where Americans could say, We were duped. They got us. But we won’t let them get away with it. God wants us to recognize our foolish complicity in this plot. He wants us to take responsibility. He wants us to acknowledge our sins—and repent of our sins!

Our failure to do so is going to have terrifying consequences. Ezekiel prophesies of a time, rapidly approaching, when America suffers widespread, murderous social breakdown that claims millions of lives. I implore you to look into these prophecies. You can read all about them in “Terrorism and Race Riots,” Chapter 4 of Ezekiel: The End-Time Prophet, by Gerald Flurry. Study it, and you will see where this growing division and hatred between Americans is leading. This really is a matter of national survival!

Who are Americans’ real enemies? Americans are ignoring this question and turning their animosity against one another. By doing so, we are playing right into the hands of forces intent on our destruction.