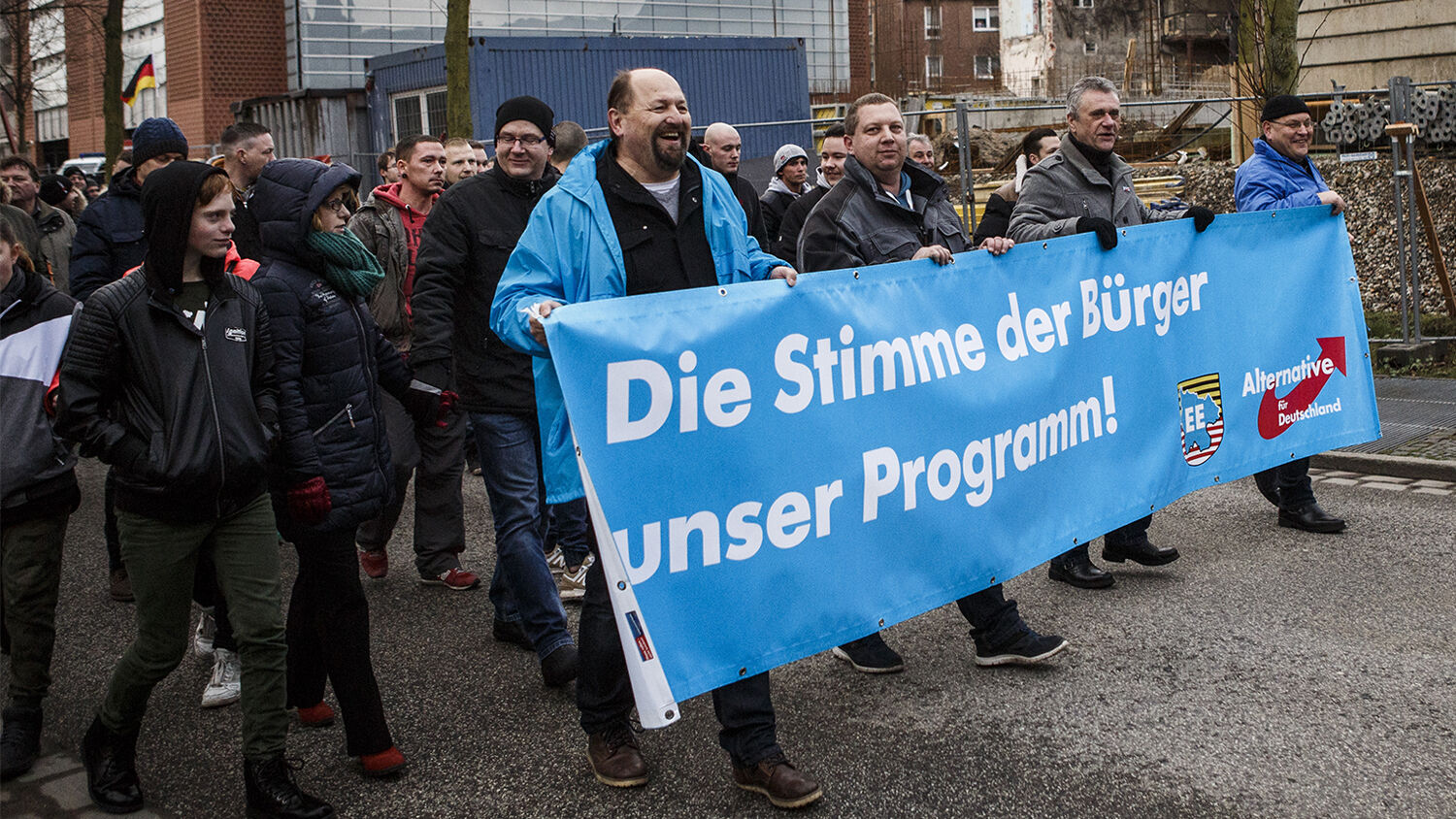 Participants hold a banner of the right-wing Alternative for Germany (AfD) in an event organized by the right-wing group ‘Zukunft Heimat’ (Homeland Future), gather to protest against the high number of mostly Muslim refugees who have moved to Cottbus over the past two years on February 3, 2018 in Cottbus, Germany.
Getty Images

Mainstream parties sink in the polls as upstart Alternative für Deutschland surges ahead.

The far-right Alternative für Deutschland (AfD) is now the No. 2 party in Germany, according to a poll published on February 19 by Bild. The results show the AfD ahead of the left-wing Social Democratic Party (spd) for the first time ever. Sixteen percent of those polled said they support the AfD; 15.5 percent said they support the spd.

The spd is Germany’s oldest party and has provided many German chancellors over the years. But after joining coalitions with Chancellor Angela Merkel’s center-right Christian Democratic Union (cdu) in 2005 and 2013, the party has lost many of its supporters.

Shortly after the federal elections in September 2017, spd leaders promised their voters that if Merkel again offered to enter another grand coalition with them, they would decline. Yet in February, spd leader Martin Schulz ended up supporting a coalition agreement with Merkel’s cdu and its sister party, the Christian Social Union (csu). Shortly after he announced the agreement, members of his party forced him to resign the party leadership and abstain from any political office.

The prospect of another coalition and the internal power struggle has caused the spd’s popularity to sink further. But the spd’s loss is the AfD’s gain.

“The spd is currently falling apart,” said Hermann Binkert, managing director for the German Institute for New Social Answers. “The AfD is currently the only party that’s decisively against everything that upsets people about the political establishment.”

Bild believes the spd’s last chance is to pull out of the ongoing coalition negotiations. The party’s members are currently taking the unique step of voting on whether to accept Merkel’s proposed coalition agreement: This voting ends March 2.

Many spd leaders, including Young Socialists leader Kevin Kühnert, are actively campaigning for members to reject the coalition. If they do so, they may win back some voters who abandoned the party in recent months and years, but they will also plunge Germany into worse political turmoil.

Germany has been attempting to form a government since September, when mainstream parties lost significant percentages of the vote and fringe parties surged. Merkel tried to forge a coalition with the cdu, csu, Free Democratic Party and the Green Party, but the negotiations failed. Now the negotiations between the center-right Christian Democrats and the leftist Social Democrats appear to be in trouble. If they fail, Germany must either call for new elections or form a minority government.

A minority government must convince a majority of legislators to pass every major decision on a case-by-case basis. It is oftentimes hard enough to build agreement within a party or a coalition, let alone among all parties in the legislature. For that reason, minority governments tend to be unstable. Chancellor Merkel has already stated that she will not lead a minority government. Many commentators and party colleges believe that if the grand coalition with the spd fails, Merkel’s 12-year career as chancellor will soon end.

Bible prophecies indicate that a strong leader in Germany will use political turmoil to rise to power. Trumpet editor in chief Gerald Flurry writes in his booklet A Strong German Leader Is Imminent, “Daniel 11:21 prophesies that this strong leader will come into power ‘by flatteries’—probably not by votes, but through a coalition government of some kind. We need to watch Germany and Europe carefully. Although Bible prophecy gives us the outline of how it will unfold, we don’t know the details.”

In the 1920s and 1930s, Germany found itself unable to form a stable government, and one minority government after another failed. This negative cycle was broken only by the rise of the National Socialist German Workers’ Party, led by Adolf Hitler. Some significant parts of that history are now repeating themselves. The soaring popularity of the AfD shows that many Germans are rejecting mainstream parties and want their nation to go in a radical new direction. One way or another, the current political chaos will lead to the rise of a new strongman, as prophesied in Daniel 11:21.