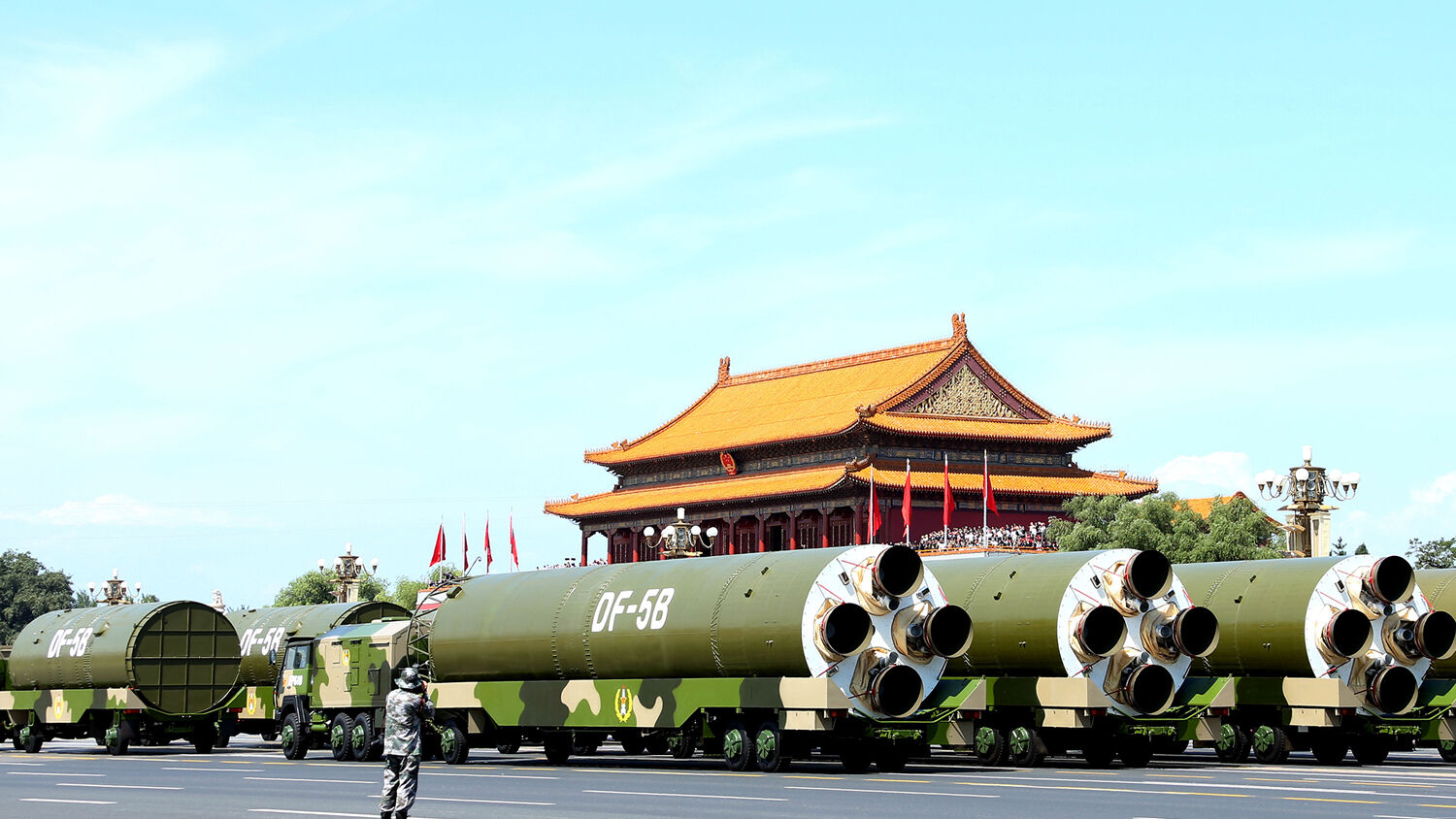 Military tanks and nuclear missiles pass the Tiananmen Gate during a military parade to mark the 70th anniversary of the end of World War ii on Sept. 3, 2015, in Beijing, China.
Getty Images

News from a little-known Chinese city has sobering implications for every person alive.

The future of nuclear warfare is becoming far more destructive. The Chinese Academy of Sciences announced last week that state-backed researchers at a facility in Lanzhou had successfully fired superheated beams of Tantalum 181. Tantalum 181 is a radioactive isotope that could be added to nuclear warheads to increase their devastating fallout.

This news from a Chinese city that many Westerners have likely never heard of has sobering implications for every person alive.

Adding Tantalum 181 to a warhead could theoretically produce a “salted” nuclear bomb. After causing extreme damage with the initial explosion, a salted bomb would release a cloud of radioactive isotopes that spread over a far larger area than those of an ordinary nuclear bomb.

Such bombs are named after a practice from the Middle Ages in which a victorious power spread salt on conquered lands. The practice often symbolized the desire of the victor to completely eradicate its enemy’s ability to rebuild and regrow after the war.

The purpose of a salted nuclear weapon is to spread deadly fallout as broadly as possible, contaminating huge areas and rendering them uninhabitable for years or possibly decades.

If enough of these devices were detonated, the radioactive clouds could merge together, making the effects exponentially worse.

The concept of a salted bomb was first suggested early in the Cold War by Hungarian-American atomic scientist Leo Szilard. He called it a “doomsday device,” because it was capable of killing everyone on Earth.

Some have said salted bombs should not be categorized as weapons of mass destruction because they are actually weapons of total destruction.

Szilard did not publicize the salted-bomb concept as a serious proposal, but to warn the world that it would soon be possible to construct weapons that could wipe out mankind. During a February 1950 nbc radio broadcast about salted bombs, he expressed the destructive ability of these theoretical weapons by asking, “Who would want to kill everybody on Earth?”

The Chinese Academy of Sciences has acknowledged its project in Lanzhou has direct military applications, saying the research is an effort to “meet a critical strategic demand of China’s national defense.”

China’s leadership has no desire to wipe out all human life on the planet. But in recent years, Beijing has focused on boosting the power of its nuclear arsenals and has said it seeks to attain a high degree of nuclear deterrence with a comparatively small number of weapons. Developing salted bombs would rapidly advance that strategy.

There is some logic in a strategy of developing weapons of deterrence.

American astronomer Carl Sagan echoed Amis’s sentiments by describing just how maniacal the nuclear buildup had become: “The nuclear arms race is like two sworn enemies standing waist-deep in gasoline, one with three matches, the other with five.”

In a major nuclear war, no one wins. And when salted nuclear weapons are added into the equation, the notion of being the first to drop a match becomes even more irrational.

But the trouble is that people are not always rational or clearheaded.

For this reason, Herbert W. Armstrong, whom world leaders often described as an unofficial ambassador for world peace, explained that faith placed in nuclear deterrence is faith misplaced:

Even if the Chinese leadership intends to develop salted nuclear weapons strictly as a deterrent, there is no guarantee that an instance of wartime desperation would not compel it to launch these devices.

As Mr. Armstrong said, history shows that when war breaks out, men ultimately do not sit on their most potent weapons. They use them. And Bible prophecy indicates that nuclear weapons of all kinds will be used en masse in a third world war.

‘Not a Single Person Will Survive’

Around 2,000 years ago, the disciples of Jesus Christ asked Him what would be the sign of His return and of “the end of the world,” as is recorded in Matthew 24:3.

In verses 21-22, Christ speaks of a specific war that signifies that the end of the age of man is imminent and that His return is at the door: “There will be greater anguish than at any time since the world began. And it will never be so great again. In fact, unless that time of calamity is shortened, not a single person will survive” (New Living Translation).

At the time Christ spoke these words, a worldwide war that could threaten to end the life of every “single person” was not technologically possible.

During that era of Roman rule, warfare entailed hand-to-hand combat with spears, swords and pila. The closest thing to a weapon of mass destruction would have perhaps been a catapult. For centuries thereafter, the technological situation remained basically the same: The weaponry to wipe out all life on Earth did not exist.

But in the last few centuries, human beings have made major advancements in weapons technology. In the 1950s, as Szilard was warning the world about a salted “doomsday device,” a major prophetic milestone was crossed. At that time, enough atomic and nuclear weapons had been developed so that a war capable of extinguishing all human life from Earth was, for the first time, possible, and even perilously probable.

Today, nations continue to hold each other at nuclear gunpoint. If China is developing Tantalum 181-laced nuclear bombs, then mankind’s ability to wipe out life from the planet has increased even further—just as Christ warned would be the case in the end time.

Yet even as this global conflict approaches, there is hope! In Matthew 24, Christ says that the global war at the end of this age will be so devastating that it could kill all human life. Then He adds a crucial detail in verse 22: It will be “shortened” (nlt).

World War iii will be interrupted! Before mankind fires enough weapons—salted or otherwise—to annihilate itself, Jesus Christ will cut the conflict short. Immediately after that time of unprecedented death and destruction, He will establish a new age of unprecedented peace and prosperity. Christ will rule Earth as King of kings and Lord of lords. He will usher in an epoch of worldwide peace. Regarding this future era of global harmony, Isaiah 2:4 says: “[N]ation shall not lift up sword against nation, neither shall they learn war any more.”

Knowing how close that radiant future is can give us perspective that fills us with hope.

To learn more about the prophecies of Matthew 24 and the profound hope that saturates them, read Trumpet editor in chief Gerald Flurry’s booklet Nuclear Armageddon Is ‘At the Door.’