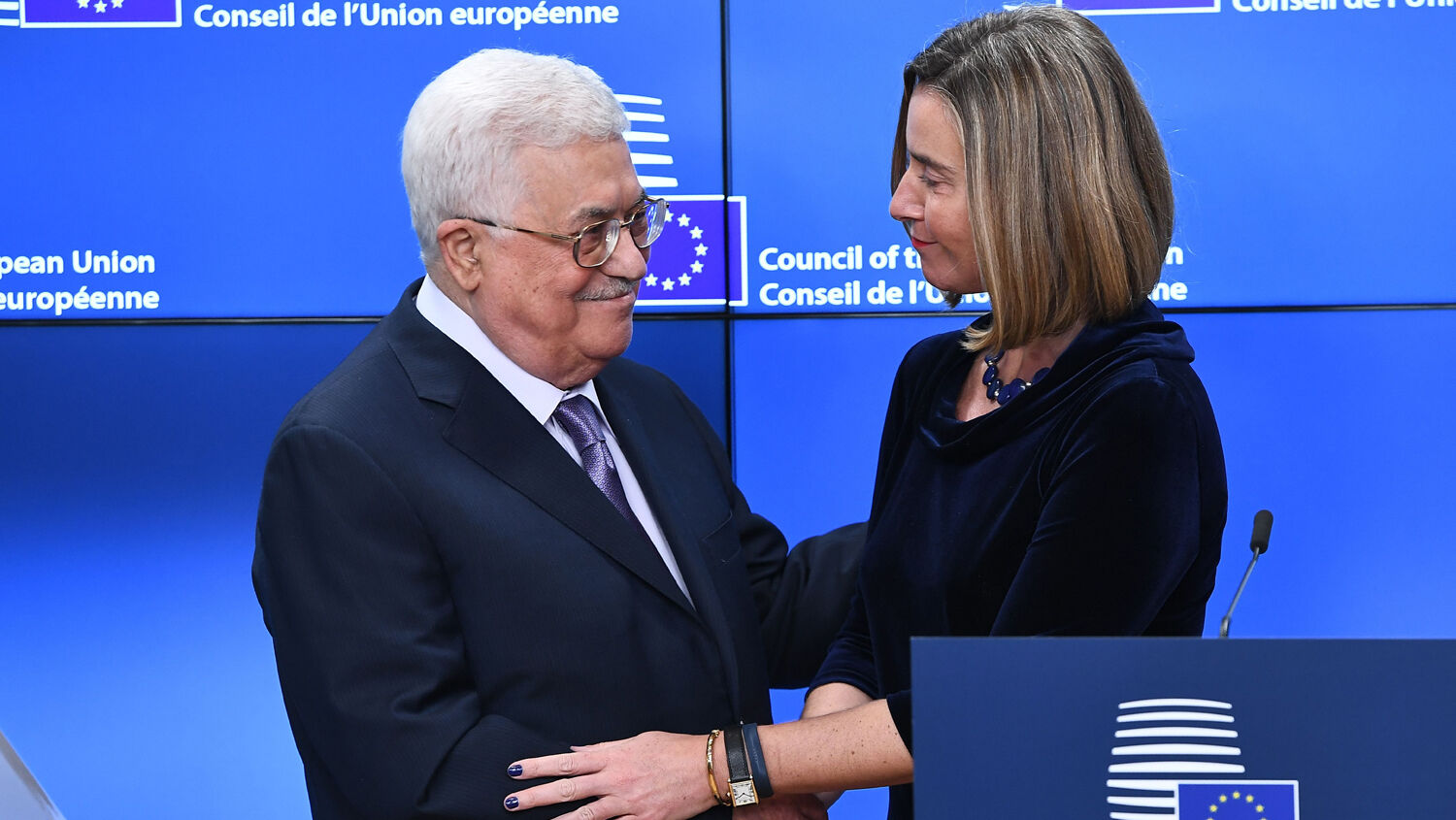 Could America lose its role in the Israeli-Palestinian peace process? Many think there is no alternative. But one power is eagerly looking for ways to replace the United States.

Palestinian Authority President Mahmoud Abbas has repeatedly called on Europe to step up as the chief negotiator in the peace process, especially since U.S. President Donald Trump announced his intention to move the American Embassy to Jerusalem. Sweden already recognizes a Palestinian state, Slovenia is in the process of following suit, and Portugal, Ireland, Belgium and Luxembourg are all actively considering it.

“We truly consider the European Union as a true partner and friend,” Abbas said upon his arrival in Europe, “and therefore we call its member states to swiftly recognize the state of Palestine, and we confirm that there is no contradiction between recognition and the resumption of negotiations.”

While U.S. Vice President Mike Pence was in the Middle East, Abbas was in Europe, arriving there on January 22. “The United States has disqualified itself from having a mediating role in the political process,” Ashraf Khatib of the Negotiations Affairs Department of the Palestine Liberation Organization (plo) told Al-Monitor. In its article “Europe Emerges as New Sponsor of Mideast Peace,” it reported that a plo source revealed that it would not negotiate with the U.S. alone, “but we haven’t said no to the possibility of having a multilateral setting with more countries, not only the U.S.” Al-Monitor continued:

The source told Al-Monitor that Palestinians have been talking with a number of parties, including Russia, China, South Africa, the European Union and its member states as well as Arab countries in order to come out with a formula. …

Palestinians would love to be involved in a process that is similar to that of the Iranian nuclear talks. In the P5+1 process, members of the UN Security Council and Germany participated in talks that brought about a major international breakthrough that addressed concerns about Iran’s nuclear activities. Palestinians would also be happy with a serious revival of the dormant Quartet group made up of the EU, the UN, the United States and Russia.

At the same time, the U.S. is cutting back its funding to Palestinian groups. As justified as this may be, as Al-Monitor pointed out in a later article, this too could lead to Europe playing a bigger role:

Now, however—as it appears the United States will no longer be the principle diplomatic mediator between Israel and the Palestinians or even a key economic donor—the door is wide open for the EU to take the regional stage. This does not mean that Netanyahu will agree to accept the EU as an alternative mediator to Washington, as Abbas would like, but the greater Europe’s economic involvement is, the more it will seek to expand its influence to the diplomatic arena as well.

It’s easy to see why—Europe does look far more pro-Palestinian than the U.S. EU foreign policy chief Federica Mogherini said, “I want to reassure President Abbas of the firm commitment of the European Union to the two-state solution with Jerusalem as the shared capital of the two states.”

But what’s in it for Israel? Why would it agree to a more pro-Palestinian mediator?

Israel may love Trump, but it fears America’s Democrats. This fear may yet motivate it to join the Palestinians and Europeans at the negotiating table.

A Pew survey published January 23 found that support for Israel in the U.S. has remained relatively constant, but with a radical shift: Support for Israel is becoming dramatically polarized. Just 27 percent of Democrats support Israel, compared to 79 percent of Republicans. Liberal Democrats are almost twice as likely to support Palestine over Israel.

Support for Israel among Democrats is plummeting fast. In April 2016, 53 percent of moderate and conservative Democrats said they support Israel. Today, that number is down to 35 percent.

Caroline Glick believes that Israel fears what might come after Trump. She wrote:

The Democrats’ move to the left has caused them to ascribe increasingly to identity politics as the basis for policymaking. Identity politics dictate a pecking order of victims. The greater a group’s status as victim, the more the Democrats support it. In this taxonomy, Israel has been determined to be an oppressor, and the Palestinians are defined as the victims.

The problem with identity politics, at least insofar as Israel is concerned, is that there is no basis in fact for the determination that Israel is the bad guy and the Palestinians are the good guys. To the contrary. As the steep rise in Republican support over the past 17 years demonstrates, the more you know, the greater the likelihood that you will support Israel. …

Israel cannot reason Democrats out of an anti-Israel position that they weren’t reasoned into. Israel has no ability whatsoever to convince the Democrats to rethink their animosity, when they never thought about it to begin with. They simply accepted the dictates of their political and ideological camp.

This mindset was demonstrated recently in comments by former Secretary of State John Kerry. In a meeting with Palestinian officials, Kerry reportedly told them to stay strong and not give in to Trump. He even suggested that Trump would be out of office within a year!

Kerry has hinted he may run for office in 2020. You can see why Israel would fear such a one-sided approach to the peace process.

As 2020 approaches, you can expect the Israelis to get nervous about a radical-left negotiating partner—perhaps even a partner that reverses Trump’s decisions. Glick warned that “if President Trump is not president in January 2021, Israel will face an administration that will make us miss Obama.”

Israel needs a back-up plan. As pro-Palestinian as Europe has been, there appears no safer alternative. Israel lives in a world where potential partners are either dictators or democrats.

The Bible forecast exactly this shift in the Middle East peace process—and because of this, we’ve been forecasting it for years.

Back in July 1971, our parent magazine, the Plain Truth, referred to “new calls for Europe to assume a greater role in the Middle East, including the peaceful settlement of the Arab-Israeli confrontation.” Under the direction of Herbert W. Armstrong, the Plain Truth prophesied that “Europe, and particularly the Common Market [today the EU], is certain to increase its involvement in the area” (emphasis added throughout).

Then in December 1996, Trumpet editor in chief Gerald Flurry wrote, “Europe is moving not only to be a cosponsor in the peace process—they want to gain control of it!”

Hosea 5:13 says: “When Ephraim saw his sickness, and Judah [the nation known today as Israel] saw his wound, then went Ephraim to the Assyrian, and sent to king Jareb: yet could he not heal you, nor cure you of your wound.”

A study of this verse in the original Hebrew reveals that both Ephraim and Judah go to Assyria (or Germany). To prove this fact, request our free booklet Germany and the Holy Roman Empire.

The word wound is number 4205 in Strong’s Concordance. It means “in the sense of binding up: a bondage, i.e. remedy.” Gesenius’ Lexicon defines it this way: “the pressing together, binding up of a wound; here used figuratively of a remedy applied to the wounds of the state.” In other words, the remedy is the wound!

Similar use of the word wound in Obadiah 7 shows that this word relates to being deceived in a peace pact.

Isn’t that what we see today? Time and again Israel has relinquished something for nothing. The land-for-peace deals have left Israel with just a thin sliver of land on the edge of the Mediterranean! Meanwhile, where is the peace it was promised? The peace process is indeed a wound.

And when Israel sees that wound, it will turn to Europe—led by Germany—despite all of its terrible history. As Mr. Flurry wrote, “It seems the Israelis can trust their worst enemy, but they can’t trust God to protect them!”

Israel has placed its trust in the hands of men for centuries. Sometimes in its own hands, and more recently in those of Uncle Sam. But how far must it go before Israel will trust in God again? As Hosea 5 says, Israel will try placing its trust anywhere else first.

But it is not going to work. As verse 13 says, this power won’t have a cure for Israel. In fact, Germany will double-cross Israel in an alliance with Israel’s Arabic neighbors! (For more, read Mr. Flurry’s article “A Mysterious Prophecy.”)

There is a cure—a solution to the peace process. We have been proclaiming it as long as we have been warning about trusting in men.

It will take the intervention of Jesus Christ to impose the only solution to the Middle East conflict (Isaiah 27:12-13; 30:19).

God clearly and plainly warns of what is coming upon men who trust in men. He is pleading for people to turn back to Him in repentance.

Be sure to go back and read Mr. Flurry’s full article “Israel’s Deadly ‘Wound.’” We can all do more to trust in God as our Savior. He promises a peace process that works on a national and individual level. It starts with looking to God as our peacemaker.