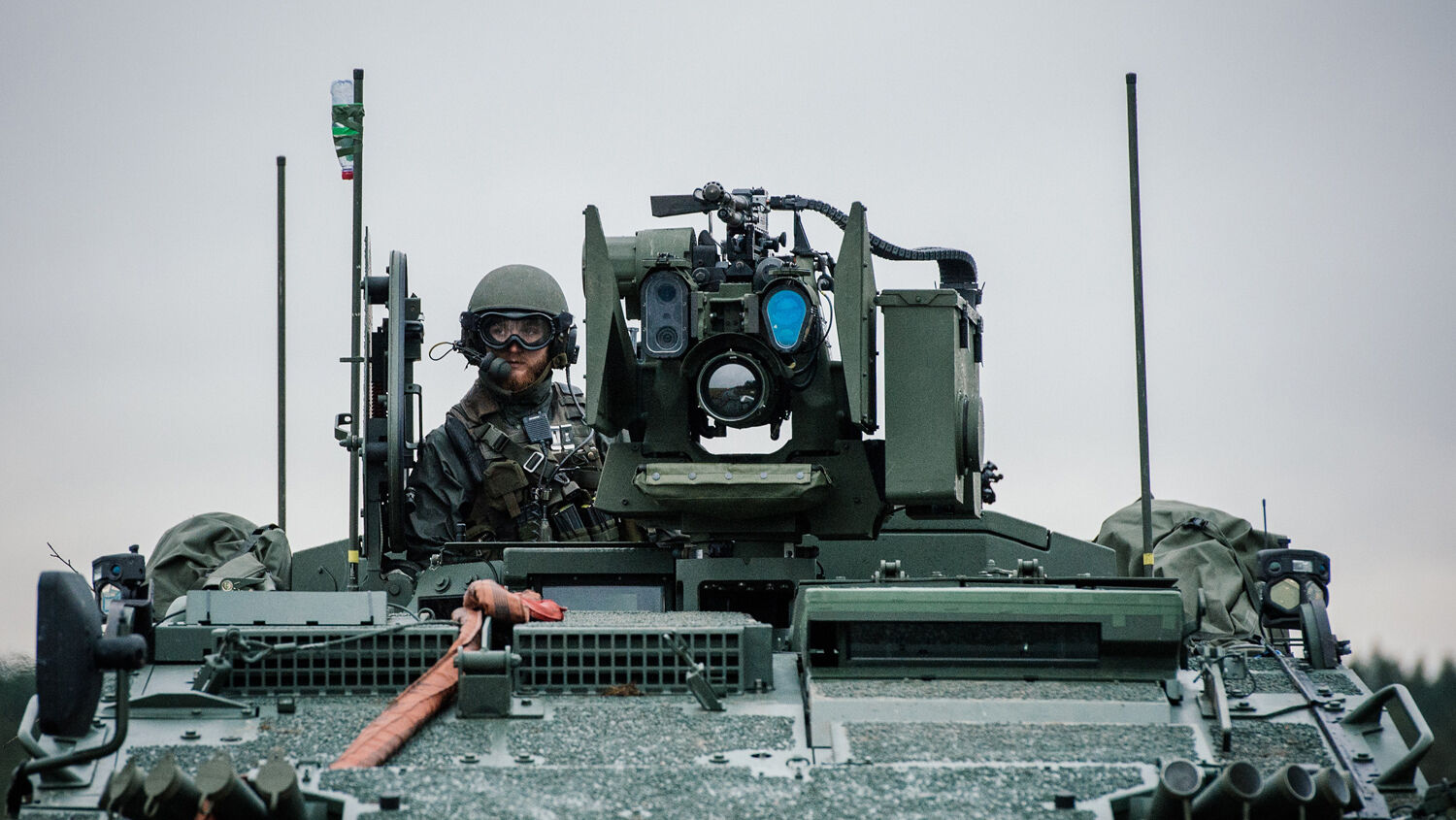 A soldier from the Swedish Armed Forces peers out the top of a Patria XA-360 AMV at Hagshult Air Base.
JONATHAN NACKSTRAND/AFP/Getty Images

Amid anxiety over Russian aggression, Sweden is ramping up its military readiness.

Sweden has taken its first steps to prepare citizens for an outbreak of war with Russia. Plans are currently being drawn up to produce and distribute pamphlets across the nation—pamphlets that detail how a civilian population can contribute to Sweden’s defense.

Starting in the spring, the instructions will go out to 4.7 million homes. According to cnn, these leaflets urge Swedish citizens to prepare not only for “crisis and catastrophes in peacetime, but also for different kinds of attacks on society and Sweden.” In addition, they will provide Swedes with information on how to take part in the defense of their country and procure essentials like water, food and heat.

The last time material of this kind was disseminated to the Swedish public, World War ii was raging. Sweden is again preparing for war.

Christina Andersson, the head of the Swedish Civil Contingencies Agency, said, “All of society needs to be prepared for conflict, not just the military. We haven’t been using words such as ‘total defense’ or ‘high alert’ for 25 to 30 years or more.”

Total war is a terrifying concept. It implies the active participation of every man, woman and child in an effort to survive.

Preparing its citizens for such a war is another step forward in Sweden’s surge in military preparedness. Last year, the country voted to bring back conscription; in 2015, the government budgeted an additional 6.2 billion krona (us$780 million) for national defense for 2016–2020.

These steps are in response to the rising threat from Russia.

Russia’s increasing military readiness coupled with its invasions of Georgia and Ukraine have alarmed Europe.

Sweden especially has cause for concern. The head of the Swedish Military Intelligence and Security Service, Maj. Gen. Gunnar Karlson, has stated publicly that the main perpetrator of cyberattacks against his country is Russia.

Many European countries are alarmed at Russia’s resurgence. The Trumpet has been watching this growing trend for over a decade.

In his 2004 article “Russia Frightens Europe and Fulfills Bible Prophecy,” Trumpet editor in chief Gerald Flurry discussed the biblical significance of Russia’s rise and its effects on Europe. At the time, Mr. Flurry focused on the Russian elections and the consolidation of Vladimir Putin’s grip on power.

After years of Russian economic and military growth, that warning is now more urgent than ever.

The consequences of Russia’s rise to power are extremely dire, not only for Europe but for the entire world. God foretold a coming clash of civilizations to occur in the time of the end. Daniel 11:40-43 warn of an end-time “king of the north,” a united Europe led by Germany. (For further information and proof on this subject, request our free book The Holy Roman Empire in Prophecy.)

Verse 44 states: “But tidings out of the east and out of the north shall trouble him [the king of the north] ….” This passage declares that in the end time, the very time we find ourselves in now, news from the northeast will cause Europe great alarm and anxiety. A map clearly shows that Russia lies northeast of Europe.

But notice what is prophesied to happen next: “[T]herefore he shall go forth with great fury to destroy, and utterly make away many” (verse 44).

There is a great war coming. Every time Europe anxiously prepares to defend itself against Russia is a step closer to this prophesied clash of powers.

It is essential that we watch events in Europe with this prophecy in mind. Continue to watch for further anxiety in Europe to push its nations to rise to meet the threat of Russia.

To learn more about this subject, request our free booklet The Prophesied ‘Prince of Russia,’by Gerald Flurry.