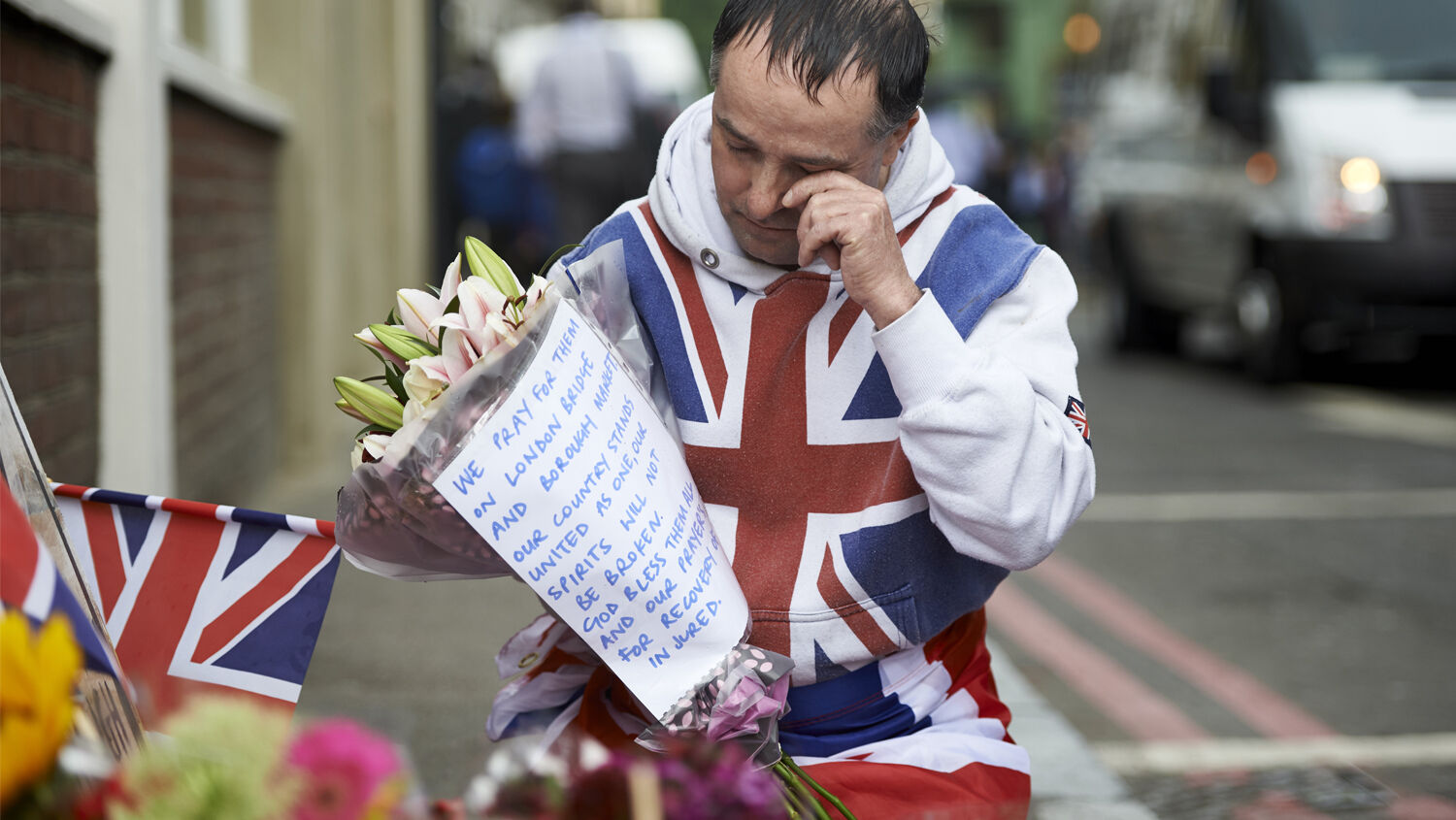 A man prepares to lay flowers at a police cordon on Borough High Street in London on June 5, 2017, in tribute to the victims of the June 3 terror attack on London Bridge.
NIKLAS HALLE’N/AFP/Getty Images

A recent survey indicates that many believe God is unable or unwilling to hear them.

“Our thoughts and prayers are with them.” “Our prayers go out to ….” Whenever a crisis hits, we hear these lines from heads of state, relatives, clergy and the common man. Some take to social media with hashtags such as “#Prayfor…”; others attend prayer vigils. Most are well meaning and no doubt many seek to commune with God when terror strikes our nations or illness afflicts a loved one.

But how many feel their prayers are being answered—or even heard?

Market research consultancy ComRes surveyed 2,069 people across the United Kingdom in early December on the subject of prayer. The overarching question that emerged from the poll was: Is God listening?

This question needs to be answered. If Christians are not being heard, why even pray? And if they are, why do we see so much trouble and strife in the world around us?

Looking at the state of our planet, it is easy to see why many are skeptical. Weather disasters are breaking records. Many languish in poverty and illiteracy. Wars rage on most continents, and the doomsday clock ticks close to midnight.

Is this because God cannot hear us? Or does He hear and refuse to answer? Or is there another explanation?

Of those polled, over half said they pray to one degree or another. But of that group, just 18 percent strongly agreed that God hears their prayers. Twelve percent believe God does not, while 36 percent were unsure. Remember, these are the people who pray. Nearly half of those who pray aren’t sure or don’t believe God hears them!

It is a sad statistic when you consider God’s intervention on Britain’s behalf in its recent history. And this poll was taken after a national day of prayer.

In 1940, British forces stood defenseless on the shores of the English Channel, stranded at Dunkirk. Behind them German Field Marshal Gerd von Rundstedt’s panzer tanks were closing in. The Allied forces were outgunned, outmanned and almost out of options.

Operation Dynamo was soon to start. Some 860 ships were ready to evacuate the troops—the smallest vessel was a 15-foot fishing boat. The Luftwaffe was ready to deal heavy casualties on the beach and on the open sea.

Then it happened. King George vi took to British radio and called for a day of prayer on May 26, the day preceding Operation Dynamo. The king asked the people to commit their cause to God. The people responded. Black and white photos attest to the support of the people. Outside Westminster Abbey, hundreds of people queued to gain access. Across the nation, people heeded the call and flocked to chapels and synagogues alike.

This day of prayer was preceded by a similar call to prayer back in 1918 by United States President Woodrow Wilson. Notice what he exhorted the people to do: “Pray Almighty God that He may forgive our sins and shortcomings as a people and purify our hearts to see and love the truth, to accept and defend all things that are just and right, and to purpose only those righteous acts and judgments which are in conformity with His will.”

In both wars, God answered those prayers.

Almost immediately after Britain’s wwii day of prayer, clouds started to brew in Europe. Hitler had been confident that his air force would prevent any sea evacuation. But soon the weather was so foul that it left much of the Luftwaffe grounded.

While storms brewed over land, the sea was remarkably calm. For nine days the conditions were so favorable that even the smallest British vessels were able to join the evacuation.

Furthermore, the German tanks stopped! Ten miles from British forces, Hitler overrode his generals and commanded the panzers to stop. This gave the British time to shore up their outer defenses, allowing them to fend off the German advance until the end of the evacuation.

By the end of Operation Dynamo, 335,000 soldiers had been saved from under the nose of the German war machine. Even newspapers were talking about this miracle!

How many in the UK today remember this powerful example of prayer and deliverance? Sadly, not enough. The recent Dunkirk movie omitted this important detail. Secular historians chalk the events up to British bravado and a stroke of luck with the weather. Is it any wonder so few today vehemently believe God can hear them?

That was another interesting question from the poll: “Can God answer your prayers?”

Again, of those who did pray, 16 percent strongly agreed that He can. Just 16 percent out of 1,073 people. If the same poll were asked of the British people in 1940, imagine how much higher that figure would be!

On June 9, Britain went back to church for a national day of thanksgiving. “One thing can be certain about tomorrow’s thanksgiving in our churches,” wrote the Telegraph. “From none will the thanks ascend with greater sincerity or deeper fervor than from the officers and men who have seen the hand of God, powerful to save, delivering them from the hands of a mighty foe, who, humanly speaking, had them utterly at his mercy.” Following their escape, these men knew whom to thank! They knew who was responsible! No doubt there were earnest prayers going up during those times.

Remember, these are the statistics of those who do pray. Almost half the population doesn’t pray at all!

With such a lack of confidence in our prayers, is it any wonder God is not fulfilling the requests of so many? We can and should have full confidence in God’s ability to hear our prayers. Notice Jesus Christ’s example in John 11:41-42—He was confident and had full faith that God heard Him “always.”

Yet today so many doubt God’s ability and many requests go unfulfilled.

Take U.S. President Donald Trump’s call for a day of prayer following Hurricane Harvey. After that day of prayer, America was hit by the worst Atlantic hurricane in history!

So why did the day of prayer not work? In Trumpet contributor Tyrel Schlote’s article “Will God Respond to America’s National Day of Prayer?”, he hit the nail on the head by comparing the president’s call for prayer with that of former heads of state.

“If you compare Mr. Trump’s proclamation to every other proclamation of national prayer, there is one stark difference,” Schlote wrote. “It boils down, really, to one word: repentance.”

Of those surveyed in the December poll in the UK, only 23 percent had ever confessed their sins and asked for forgiveness. While it is commendable to pray for family and friends, where is the repentance?

Remember that King George vi not only asked the people to pray for divine intervention, but also for the people to turn back to God in a spirit of repentance!

Trumpet editor in chief Gerald Flurry wrote an article in the November 2017 Trumpet titled “Is God Answering America’s Prayers?” Notice what he wrote:

When he was writing about God, the Prophet Amos used the word “Adonai” 25 times—more than the other 11 minor prophets combined. This word means “Headship,” “the Head,” or “the God who blesses,” according to the Companion Bible. Amos discussed a lot of negative prophecies, but he kept reminding himself of the great God behind the punishments—the God who sometimes sends trials and tests to humble us and to move us to get to know Him. When you understand their purpose, even God’s difficult prophecies are inspiring and uplifting! God is a God of love. He only sends chastening to inspire us to return to Him.

“Hear ye this word which I take up against you, even a lamentation, O house of Israel. … For thus saith the Lord unto the house of Israel, Seek ye me, and ye shall live” (Amos 5:1, 4; see also verse 6). God delivers bad news, but if we respond the right way, we will live forever!

“Seek him that maketh the seven stars and Orion, and turneth the shadow of death into the morning, and maketh the day dark with night: that calleth for the waters of the sea, and poureth them out upon the face of the earth: The Lord is his name” (verse 8). This is exactly what we saw in these recent hurricanes: God brought trillions of gallons of water out of the Gulf of Mexico and the Atlantic Ocean and poured it on American cities! He would much rather use water to grow our crops and give us prosperity, but we must listen to Him. He has to get our attention if He is going to give us eternal life and rule over the entire universe.

“For I know your manifold transgressions and your mighty sins …” (verse 12). This is why God punishes us with hurricanes! We could pray and not even get close to God if we are not obeying Him. When we are involved in transgressions and sins, then God will not listen to or answer our prayers (Proverbs 28:9; Isaiah 1:10-15; 59:1-2). We must repent and return to God to reap tremendous blessings.

As the recent poll highlights, people view the world around them and are skeptical about the power of prayer. But imagine if, as a nation, we returned to God and repented. We would see blessings and miracles that even Dunkirk could not compare to.

If you are interested in understanding true repentance and building a strong relationship with God through prayer, request and read our free booklet Repentance Toward God.