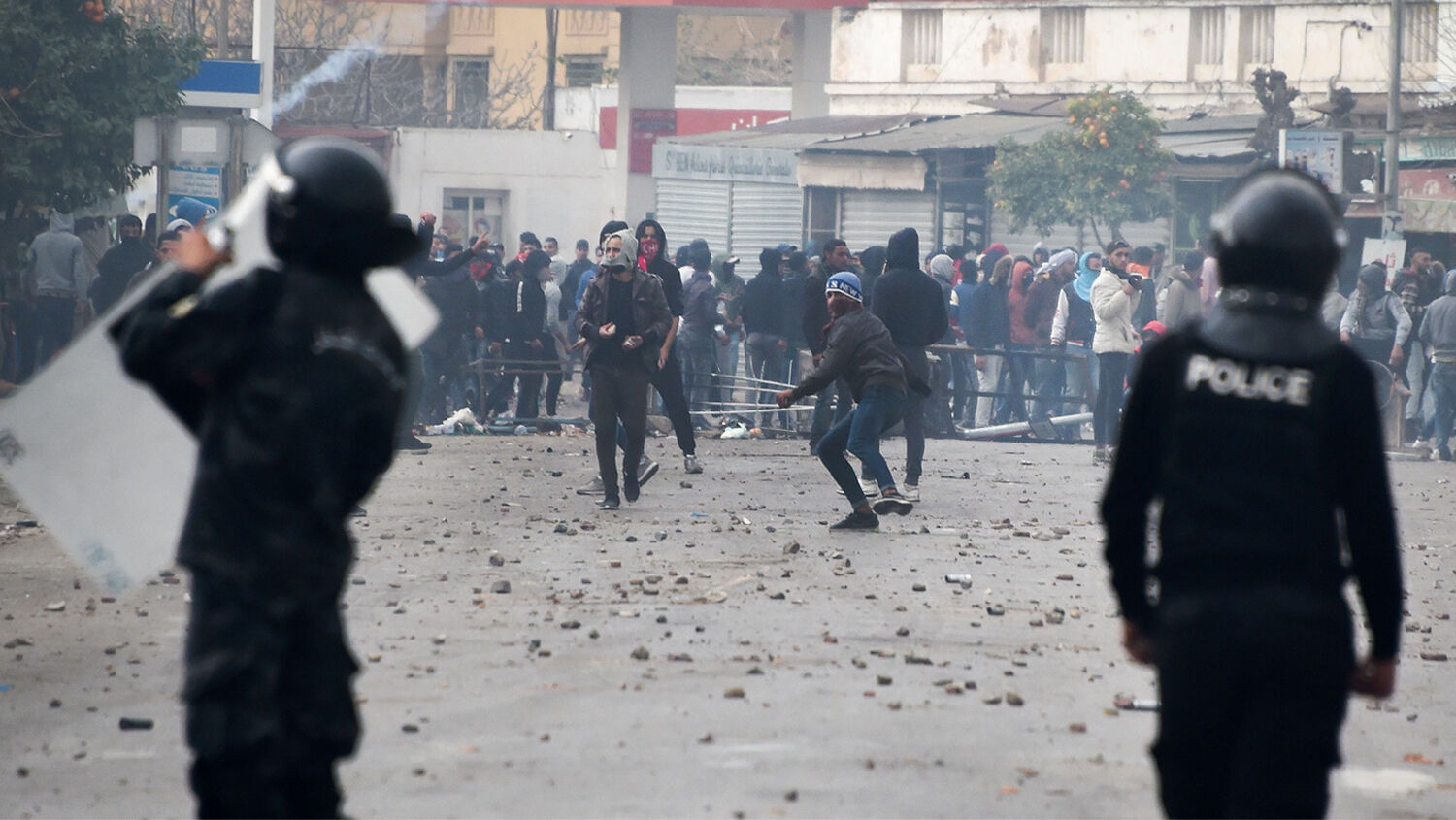 Tunisian protesters clash with security forces in the town of Tebourba on January 9.
FETHI BELAID/AFP/Getty Images

The spark that lit the Arab Spring is burning again.

Widespread rioting is flaring up across the North African nation of Tunisia. The on-again, off-again rioting has continued since January 3. What started as peaceful protests against government austerity measures has devolved into looting and vandalism. Security forces have reacted with force. One protester has been killed in a confrontation with police.

According to the Tunisian Interior Ministry, more than 900 people have been arrested. At least 100 security forces have been injured.

The riots started following the implementation of government price and tax hikes at the start of the year. The measures were part of a deal for Tunisia to receive $2.9 billion from the International Monetary Fund. The Tunisian economy is woeful: Jobs are scarce and tourism is languishing.

According to one Tunisian economic adviser, the current debt is 70 percent of the nation’s gross domestic product. The government needed the cash injection, but the terms and conditions have been deeply unpopular. Discontent first stirred through social media. Soon after, came the rioting on the streets.

The protests were organized around two key dates in Tunisia’s history. The first is January 3, the anniversary of the bread riots. In late 1983 and early 1984, the late President Habib Bourguiba announced price hikes on items such as bread and flour. Tunisians took to the streets in anger. Dozens of protesters were shot dead by security forces. The bloodshed led to Bourguiba annulling the unpopular measures. Today’s protest leaders say unrest will continue until current Prime Minister Youssef Chahed follows in Bourguiba’s footsteps.

The second and perhaps more tell-tale date is that of the Arab Spring. In late 2010, a street vendor lit himself on fire to protest police harassment. It sparked rage across the country. On Jan. 14, 2011, then President Zine al-Abidine Ben Ali fled to Saudi Arabia. This momentous time in Tunisia’s history birthed the Arab Spring, reshaping the Middle East.

Today, Tunisia is seen as one of the best outcomes of the Arab Spring, since its upheaval led to a “democratic” government taking control. But it is far from perfect and far from stable. For instance, the Ennahda Islamist Party went mainstream and even controlled the ruling coalition until 2013. But public anger over security shortcomings led to the party’s loss of its majority in the 2014 elections.

While it claims to have become a civil political party, Ennahda has been accused of refusing to abandon its Islamic roots. Recent efforts by Ennahda to support groups branded as terrorist organizations has only increased suspicion. Despite its Islamic ties and problematic three years of rule, Ennahda has managed to form a coalition government. Its partner is Nidaa Tounes, or “Tunisia’s Call.” This secular party won the most seats in the 2014 election, giving it the right to choose a prime minister and form a government.

While many hailed this as a great way to sideline Islamists like Ennahda, the 2018 protests could prove otherwise.

Being second fiddle in 2018 might play into the Islamist party’s hands. Notice what the Guardian recently reported:

Now it is the secularists who are in charge and face protests. Ennahda, the largest party, has become part of the government playing with fire in the dry tinder of inequalities and graft. In Tunisia, the Arab street ousted a dictator; it could also oust democrats.

If protests topple the current administration, Ennahda could be waiting in the wings for another chance to govern! The protesters on the street are chanting antigovernment slogans, but most of the heat is directed at Prime Minister Chahed, not the Islamists.

Why Should You Care?

Anyone who thinks a riot or two in a faraway African nation is little cause for concern needs only glance back to 2011 to realize the error of his thinking. The Guardian is right: Tunisia is a tinderbox. And that tinderbox has already lit fires across the Middle East in this decade!

And the region is much more flammable today than it was in 2011. The Arab Spring was a failure. It has left many nations across the region divided and rife with domestic unrest and terrorist infiltration. Just look at Tunisia’s neighbor Libya. The nation is a radical training camp today. Further east, Egypt is teeming with unrest similar to that of Tunisia. Only the strong hand of Abdel Fattah al-Sisi and his United States-funded military is keeping the terrorists in the Sinai and off the streets of Cairo. Yet Egypt still languishes in poverty—the scars of Muslim Brotherhood rule post-Arab Spring.

If Tunisia were to go up in flames again, it is easy to see how other nations in the region might follow its lead once more.

Tunisia has by no means seen the end of unrest. Nor has the Middle East.

There is more proof of this beyond the protests, economic hardship and terrorism. The Trumpet always points it out when discussing world news: It is the element of Bible prophecy.

For those who were following the Trumpet during the Arab Spring, you know that we pointed to prophecies in the book of Daniel and elsewhere that discuss the rise of a radical Islamic power known as the king of the south. Even if you are new to the Trumpet, ask yourself, “Who has gained the most from the Arab Spring?” Which nation has used the crises to expand its regional influence and fund terror?

And it is Iran that the Trumpet identifies as the head of this prophesied Middle Eastern power known as the king of the south.

Before reading further, watch the video below—it’s only 90 seconds long.

Tunisia may be not only the spark that lights the next Arab Spring, it may yet find a place in Iran’s regional empire. Notice what Trumpet editor in chief Gerald Flurry writes in his free booklet Libya and Ethiopia in Prophecy:

All you need to do is get a good map of the Middle East, with the emphasis on the Mediterranean Sea and the Red Sea. Then you can see why the king of the south, or radical Islam, is so interested in an alliance with or control over these two countries (as well as Egypt and Tunisia). They are the two seas that comprise the most important trade route in the world!

Tunisia sits on the southern shore of the Mediterranean. Much like Libya today, Tunisia could become both a training ground and a staging ground for radical Islamists. The target: Europe. Remember, prophecies in Daniel say that the king of the south will “push” at Europe! Do you think the flow of terrorists and migrants through Libya is a push at Europe? It certainly is!

Just look at what happened in Tunisia. It didn’t take long for that food crisis to topple a regime. In times of dramatic upheaval, people often look to the vocal radicals for solutions. Extremists will be empowered.

Even if Tunisia quells the unrest, the Trumpet forecasts that the nation will continue to be badgered by the influence of radical Islam.

For these reasons, it is important for us to keep a close watch on the protests on the streets of Tunis. These rioters toppled a government and sparked a regional revolution before. They might do so again.

You can read more on the role Iran will play in the future of the Middle East and North Africa, and why we keep a close eye on the rise of radical Islam. Visit our Trends page and read the article “Iran and Europe Heading for a Clash of Civilizations.”

While the prophecies about climactic wars between world powers are inevitable, so too are other prophecies. Prophecies of world peace and the soon-coming Kingdom of God are just as certain! And they are coming quickly on the heels of the brief but terrible clash between the king of the north and the king of the south.