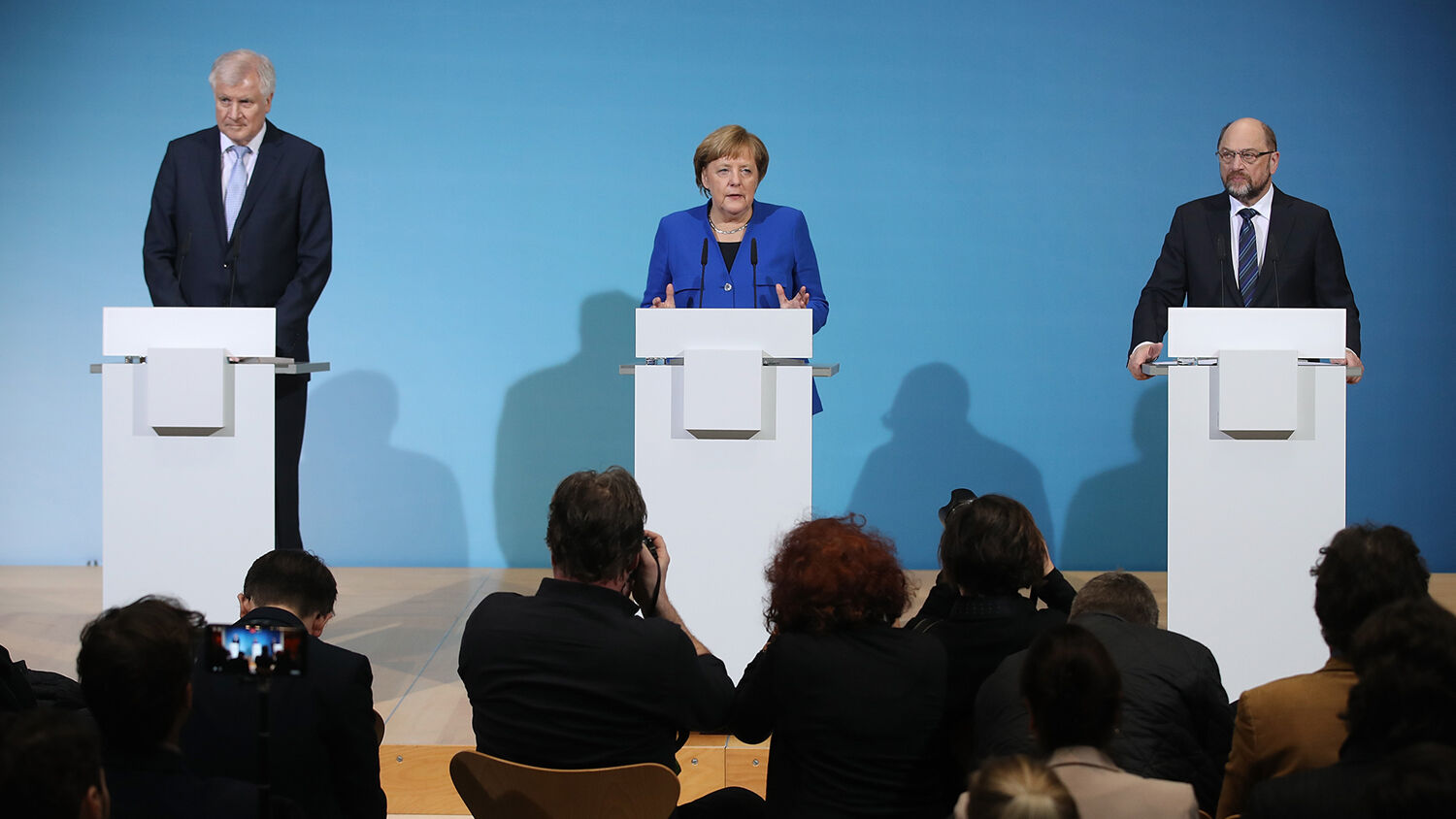 “You need to watch Germany. There has been a real turning point in German politics.” That’s how Trumpet editor in chief Gerald Flurry began his October 19 Trumpet Brief.

Today I want to help you do that. On Friday, Germany’s leaders emerged from a marathon 26-hour negotiation, declaring that they’d made a breakthrough in forming a coalition.

What does this latest news mean? What’s next for Germany’s government?

The truth is, German politics are still incredibly fragile. But the text of the agreement reached on Friday could have major ramifications for the European Union. It could see Angela Merkel strong-arming Eastern Europe into accepting thousands of migrants—and strong-arming Germany into a much more powerful role in Europe.

Germany held a general election on September 24. The results were described as a “political earthquake.” Fringe parties like the right-wing Alternative für Deutschland and the far-left Left Party won record shares of votes, making it very hard for mainstream parties to combine to create a majority and form a government.

Angela Merkel’s Christian Democratic Union and its sister party, the Christian Social Union, won the most seats and began trying to form a coalition with other parties. They tried to unite the environmentalist Green Party with the pro-business Free Democrats, but the differences were too great, and the Free Democrats pulled out.

Next Ms. Merkel turned to the Social Democrats (spd), Germany’s main center-left party. Ms. Merkel had governed a coalition with them prior to the election—the election that handed the Social Democrats their worst election result in postwar history. Because of this epic defeat, they had initially decided to sit out coalition talks and remain out of power rather than govern with her again.

But once Merkel’s attempt at a coalition with the Greens and fdp fell apart, the Social Democrats changed their minds. They agreed to begin exploratory talks toward eventually holding coalition negotiations, which, if successful, would result in Germany actually—finally—installing its next elected administration.

Meanwhile, Germany had entered its longest time in postwar history without a government. Which brings us to Friday.

What Actually Happened on Friday?

They hope to have the final coalition negotiations completed and a government ready to go by April 1. So in the best-case scenario, Germany is still three months away from a government.

Will These Talks Succeed?

Maybe, but there are some major obstacles. In the 26-hour negotiation, Merkel’s party got a lot of what it wanted—an ongoing trend, it seems—while the leaders of the Social Democrats made a lot of concessions.

The trouble is, the spd as a whole will have to vote on the deal—and its members may well vote it down.

In fact, it already has. On Saturday, spd delegates at a regional conference in Saxony-Anhalt voted against continuing coalition talks. This vote was non-binding, but Der Spiegel called the result “hugely symbolic.”

Binding votes are on the way. On January 21, 600 delegates will have to give the go-ahead for formal talks. If and when the talks are finished, all 400,000 spd members will vote on the final deal.

Some important party leaders oppose the deal, and the leader of the youth wing is actively campaigning against it. More importantly, almost a majority of the spd rank and file are against it. A recent Der Spiegel poll found that 49.7 percent had a negative view of a new coalition, with only 41.9 percent in favor.

If These Talks Succeed, Will Germany Have a Strong Government?

No. If they succeed, Germany will be ruled by something roughly equivalent to a coalition between United States Republicans and Democrats. That’s not a recipe for stability.

Chancellor Merkel has made it work before, but at those times, she had much larger majorities. In the last coalition, her government controlled around 80 percent of the seats in the German parliament. It would have taken a truly epic rebellion to block any government policy. But this potential new coalition would control only 56 percent of the seats. Even a minor revolt could block the government.

And this would be a government led by the walking wounded. Agence France-Presse (afp) wrote yesterday that “before the ink was even dry on the roadmap for her new administration, observers branded Merkel and the team she’s likely to lead a ‘losers’ coalition with little ambition or power to tackle the major challenges facing the country and the continent.” Der Spiegel called the proposed new government a “paleo-coalition” of political dinosaurs.

Here in the United Kingdom, a well-known quote by former soccer player Gary Linker provides an apt description: “Football is a simple game: Twenty-two men chase a ball for 90 minutes and at the end, the Germans win.” In Germany, democracy risks becoming a game where every four years you go to the polls, and at the end, Merkel wins. This is why more and more voters are shifting away from mainstream parties and toward more extreme parties. If you want something fundamentally different for Germany than Angela Merkel, they are your only choice.

This is very dangerous for German democracy. These extreme groups oppose not just political parties but traditional politics. They don’t just want new leaders, they question the political system itself. Their beliefs are so far outside the liberal mainstream that the mainstream parties won’t work with them.

The best-case scenario, then, is that Germany will have an unstable government by April. And underneath, an anger that threatens to burn down the political establishment will continue to smoulder.

Does This Proposed Coalition Have Any Significant Plans?

Yes. As part of the roadmap agreed to on Friday, this potential German government has agreed to a radical plan to transform Europe. If this coalition can limp on long enough to see it through, it will have some huge ramifications.

The coalition wants to harmonize minimum wages and social security across the EU. That doesn’t sound threatening, but it is a radical step toward creating a European superstate.

More obviously worrying is that the agreement “hints at the possibility of linking the EU budget to political conditions, when it states that reciprocal solidarity must also count for the EU budget,” as the EU Observer put it.

That is a big change. What it means is that the EU could cut off certain countries from receiving funds if they go against what the EU wants. Each EU nation pays into the central budgets, and everyone gets some money back. Poorer states get back more than they pay in. But if this change takes place, those nations who defy Brussels could find themselves paying money in and getting nothing out—a fine on EU member states.

The EU Observer noted that “solidarity” is “a code word for taking in refugees under the EU scheme.”

The idea of the EU was originally sold to voters across Europe as merely a trade agreement. Across Central and Eastern Europe, voters have made it clear that they don’t want more migrants. Deciding who comes within your nation’s borders is right at the heart of what makes a nation-state. Now voters face being fined by Brussels when they try to exercise one of the basic rights of a nation. What they are a part of has clearly become something far beyond a trade agreement.

Last week I wrote about the end of the “good Germany.” Is this what the new Germany looks like? One that tries to blackmail the rest of Europe into following its will?

This plan will be hard to enforce, but the fact that it is even an ambition of the coalition shows a newfound German willingness to throw its weight around.

Why Should You Care?

Because the political crisis brewing in Germany will shake the world.

I don’t know exactly what will happen next. This potential coalition could fall apart, and Germany’s time without a government could drag on. A crisis could hit before the negotiations finish. Or the coalition of the walking wounded may stumble on long enough to introduce some major EU reforms.

But I do know where this is ultimately leading. And you can too.

The Bible prophesies of a major change coming to Germany. It prophesies of a strong German leader. And it prophesies that this leader will not be elected democratically. This suggests he will come to power through some sort of political crisis. In a 2009 Key of David program, Mr. Flurry said this leader could “perhaps take advantage of a weak coalition.”

This may sound extreme, but if you call yourself a Christian, you have no choice but to pay attention to these words. Some of these prophecies came from the mouth of Jesus Christ Himself!

Germany is in exactly the situation that Mr. Flurry said this earthshaking leader could take advantage of.

That is why German politics are worth watching closely.

Our article “Why the Trumpet Watches the Rise of a German Strongman” will take you step by step through these prophecies. You can prove all this to yourself and, in the process, gain vital insight into the news of the immediate future—and the wonderful hope beyond.