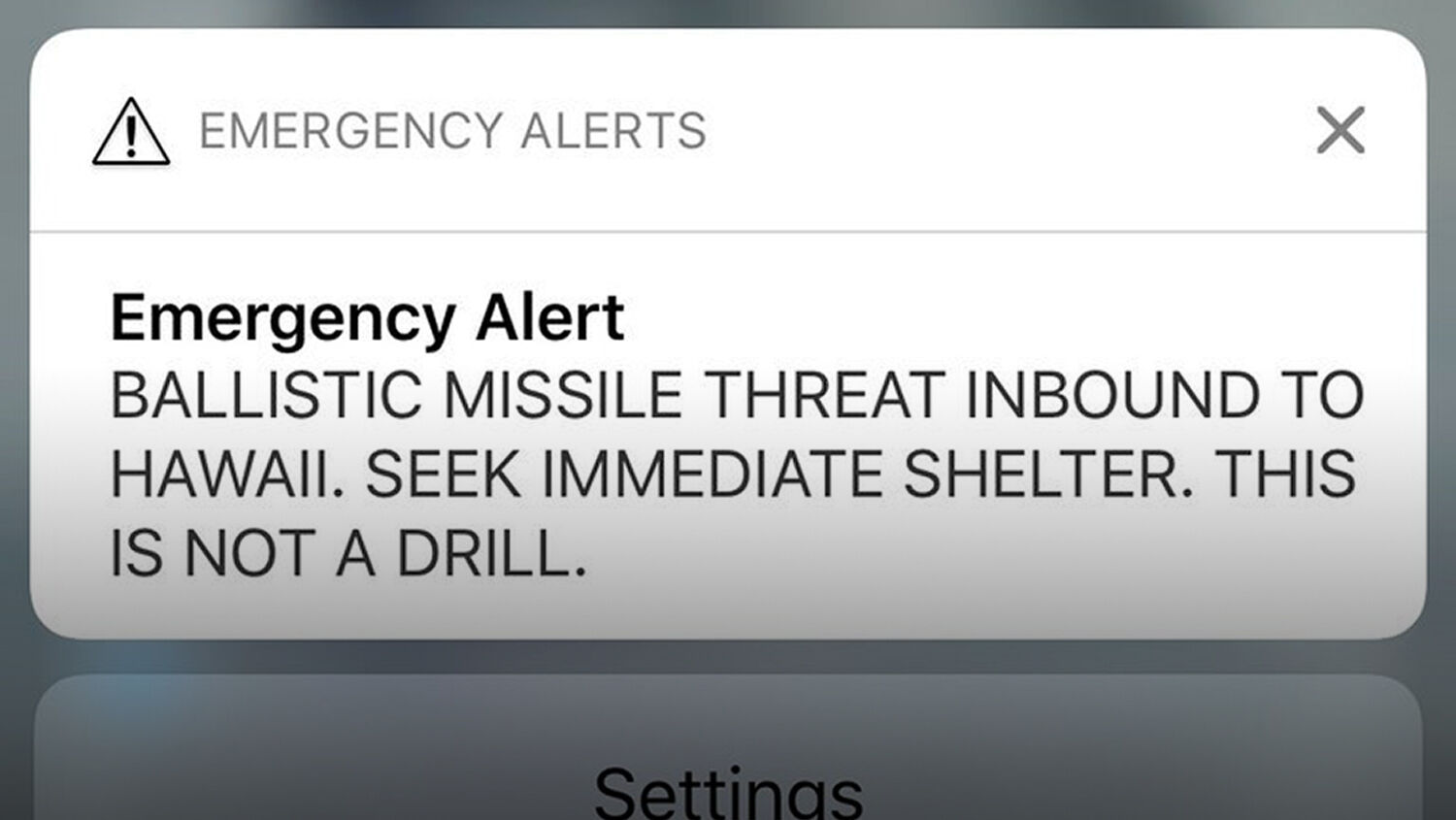 An image of the alert erroneously sent to cellphones in Hawaii

Is America jumping at its own shadow?

Across Hawaii, thousands of cell phones received a message: “BALLISTIC MISSILE THREAT INBOUND TO HAWAII. SEEK IMMEDIATE SHELTER. THIS IS NOT A DRILL.”

The message, sent at approximately 8 a.m. on Saturday, January 13, immediately propelled almost all of Hawaii’s 1.4 million residents into panic. The chaos lasted for more than half an hour before another cell-phone message was sent out, retracting the warning.

Fortunately for the people of Hawaii, the warning was merely the result of human error during a routine drill. State government officials have since apologized to the public, reassuring them that there was never a threat.

The mishap has added to the discourse about the current tension between the United States and North Korea. The ever expanding range of North Korea’s intercontinental ballistic missiles has grown from covering the U.S. territory of Guam to reaching even the shores of the continent. Hawaii, sovereign American soil, is well within the “danger zone” of Korean nuclear weapons.

Max Fisher of the New York Times agrees with analysts saying that the Saturday morning missile scare highlights the risk of an imminent nuclear exchange. In his article “Hawaii False Alarm Hints at Thin Line Between Mishap and Nuclear War,” he compared the situation between the U.S. and North Korea to the tension of the Cold War. Throughout his piece, Mr. Fisher provided examples of just how close the ussr and America came to launching their nukes—all over small mistakes in protocol and human error. He and many others claim that the tension between Pyongyang and Washington could soon erupt into World War iii.

About one third of God’s inspired Word is prophecy, 90 percent of it for our time today referred to as the “end times.” And while the Bible reveals that nuclear war is just around the corner, it also reveals that it will not be a conflict with North Korea that kicks it off.

Luke 21:20-22 give an account of Jesus Christ’s description of the times right before the outbreak of the final world war: “And when ye shall see Jerusalem compassed with armies, then know that the desolation thereof is nigh. … For these be the days of vengeance, that all things which are written may be fulfilled.”

In his booklet Nuclear Armageddon Is ‘At the Door,’ Trumpet editor in chief Gerald Flurry explains how the radical, tyrant-led nations of North Korea and Iran may seem threatening today but they are not America’s greatest threat.

It is interesting to note, however, the prophetic aspects of such false alarms as we witnessed with this recent missile scare.

The following is from our article “False Alarms, True Terror”:

Long before the United States was established, God prophesied many riveting details of the nation’s prosperity through His servant Moses (Genesis 48:13-22; 49:22-26; Leviticus 26:3-10). God also explained specifically how He would punish America if this powerful, blessed nation forgot and disobeyed Him: “… I will even appoint over you terror …. [A]nd ye shall flee when none pursueth you” (Leviticus 26:16-17).

The hysteria and panic during the 38 minutes it took to send out the all-clear message to Hawaii’s residents reflect the deep-seated anxiety prevalent in the U.S.

Leviticus 26 offers a particularly powerful prophecy to the end-time nations of Israel. (For more information on precisely who these people are, request our free book The United States and Britain in Prophecy, by Herbert W. Armstrong.) God warns that if the people of Israel do not repent of their evil ways, great curses will fall upon their nations. As verses 16-17 show, God will bring great distress on Israel, so that they see attacks when there are none.

As time progresses and tensions rise in the United States, we can expect more incidents like this to bring panic and fear upon its cities.

It will take far more than diplomacy with North Korea to bring about true peace of mind for all Americans. The only way to rid the land of all terror is the return of Jesus Christ and the repentance of all individuals on Earth. Missile scares and tension with North Korea may be terrifying prospects now, but let’s look beyond these issues, with joyful anticipation, to the soon-coming return of our Savior and the end of all war.