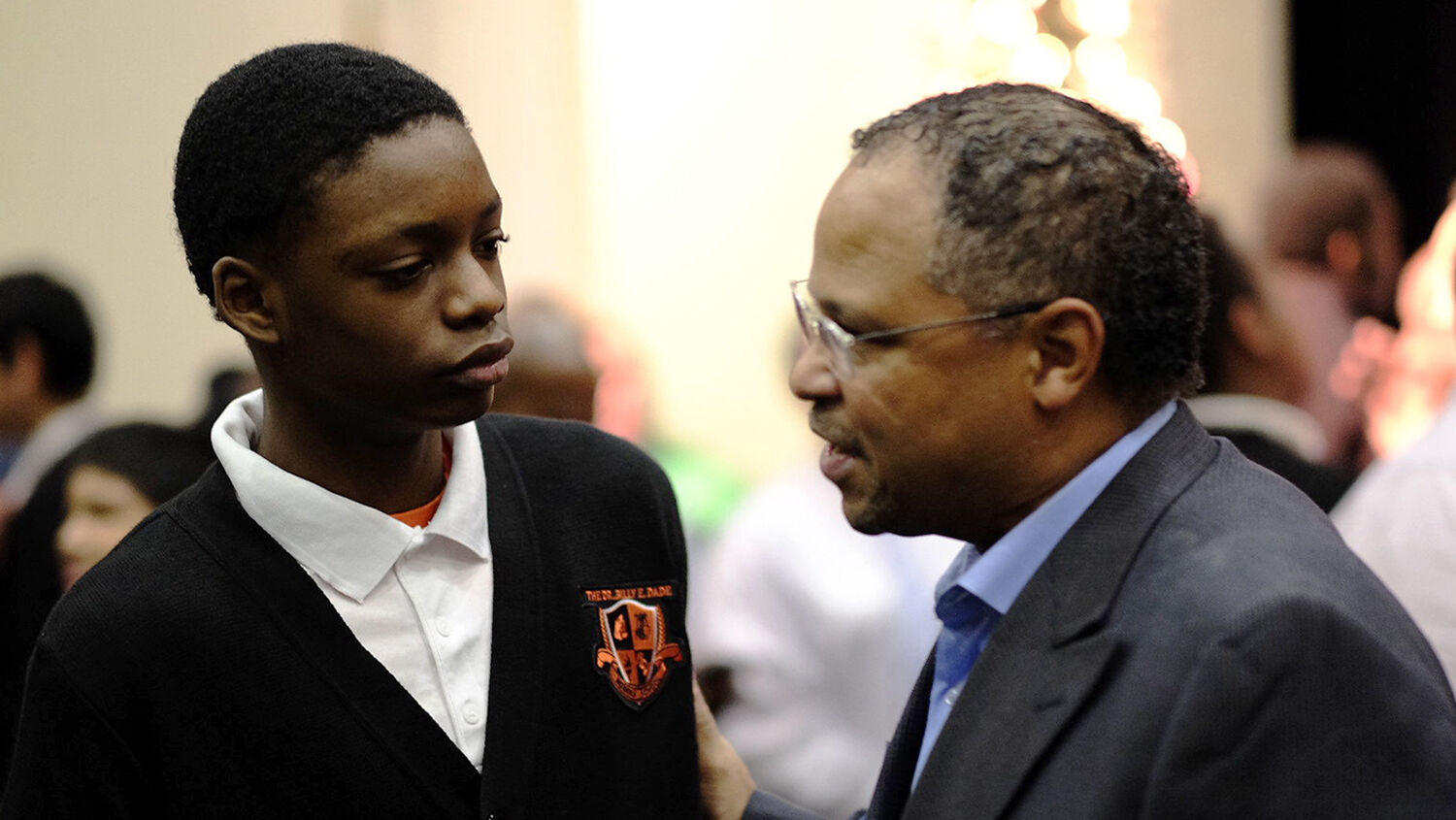 A stunning incident in a Dallas middle school is worth thinking on.

The first “Breakfast With Dads” happened at Billy Earl Dade Middle School last month. The school wanted their sons to bond with their fathers. More than 800 of the school’s 900 students are from low-income families; many are from broken homes. Hundreds of the 11-to-13-year-old boys simply did not have a father to come with them to breakfast. So sign-up was low. Only 150 boys.

And still there were not enough dads.

So the school asked men to volunteer. “[T]he reality of a great event like this is a lot of our kids will not have a dad present. But there is nothing like having a male present in the form of a mentor,” one organizer posted on social media. “We are in need of at least 50 or more additional male mentors who can devote 1 hour of their Thursday morning next week to this cause.”

Fifty men. One hour. Word spread. The Dallas Morning News picked up the story. And when breakfast on Thursday came, an astounding six hundred men showed up.

“The look of awe—even disbelief—in students’ eyes as they made their way through the crowd of ‘Dads’ was astonishing,” wrote Stephanie Drenka, whose beautiful photographs of the event have hit several news sources. “It was a miracle any of the pictures came out in focus, because I could barely see clearly through the tears streaming down my face and fogged-up glasses.”

Present and accounted for that day was assistant Dallas police chief Jason Rodriguez. He wrote, “Words cannot describe the impact mentoring youth can have on both you and your mentee. Powerful to see a community of fellow men and fathers come together to wrap their arms around [our] young men.”

Words cannot describe the impact mentoring youth can have on both you and your mentee. Powerful to see a community of fellow men and fathers come together to wrap their arms around or young men. Thank you for having me out. pic.twitter.com/2fTicFpzws

The boys were taught how to tie a necktie in a half-Windsor. Then everyone ate breakfast together and broke into individual chats. “There was so much inspiration everywhere,” Drenka wrote. She said the hope in that room was palpable.

Why is this so moving?

Because we appreciate seeing solutions and hope in a world we know is broken.

Because someone recognized that the boys at Billy Earl Dade Middle are struggling. And they saw that what they needed was not funding or social theories but dads. And because when dads—and substitute dads—for one Thursday morning in December answered the call, the looks on their faces told the whole story.

We don’t talk about it much in public, but we know that our boys need the help and attention of engaged fathers—or, in their absence, selfless men.

Look at the photos of those boys, looking up at the policemen, the civil servant, the auctioneer, the preacher, the soldier, the professional, the 30-, 40-, 50-, 60-year-old men who, just by being there, showed them: You have a future. You have something to give. You can grow up to be a good man.

We know how valuable this is. Look at those boys, and you sense what a difference this sort of involved masculine mentorship can make in a young man’s life. You see this building future men, men with a better shot at responsibly raising sons of their own and contributing to society.

For all the extremes our societies have gone to in order to destroy the role of dads, we still see that a grown man who works, who produces more than he consumes, who cares about his community, who gives his time to growing boys, is a good thing.

This story struck a nerve, and not just in Dallas. Inspiring photos from Drenka and others are up at abc, cnn, msnbc, Fox News, the Washington Post, the Daily Mail and many other outlets. Organizers created a Facebook community to turn “Breakfast With Dads” into a movement.

A middle school hosted a “breakfast with dads” event, but some school administrators worried about students who didn’t have father figures or whose dads couldn’t attend. When they put out a call for volunteers, nearly 500 men reached out. pic.twitter.com/y2hfeQOoGR

It is moving to see reporters and readers celebrating something so unabashedly pro-man.

In the backs of our minds, we know our society is suffering a crisis of manhood. Dads and men are not engaging in young people’s lives. And lost boys are growing up to become absent fathers themselves. Whether real dads or substitute dads, we need dads.

We need grown men who sacrifice their time for boys, who invest in the future of growing young men. We need men who will hear a call for help, inconvenience themselves, and be there when it really counts.

Yes, in fact, we need men. The argument that men are unnecessary as leaders, as providers, as protectors, as fathers is false.

This December, when 600 men saw yet another newspaper article or news clip or social media post scroll by and had the option to ignore it and move on with their lives, they stopped. When someone said these young men you’ve never even met need you, they dropped what they were doing, found out where Billy Earl Dade Middle School was, and stood up for these boys.

Look what happened when men were told, You are needed. For every man the school sought, 12 men answered!Twelve men leaped into action.

What these men did was genuinely manly, and we are moved by manliness. It is especially uplifting when all we have been hearing for months is how men are monsters and predators. We have seen vile men shamed, and all men blamed and scolded, and many men meekly apologize for things they did not do. So it is refreshing to see men exhibiting truly masculine compassion and strength.

News outlets may use it as a short feel-good story and move on. But we should all consider why it makes us feel good. We should also be honest about how many of the assumptions modern society is making about men, marriage, family, parenting, sex roles, and the needs of our children it undermines. Though most of the time we simply look the other way, the needs that these men rose to fill are real. And the need for such men has never been greater.

If you are a man and want to better understand your God-given role—as a leader, a provider, a protector, a husband, a father and a builder—if you want to heed the call and fill the needs in your family and in society, start by reading our free e-book Biblical Manhood.