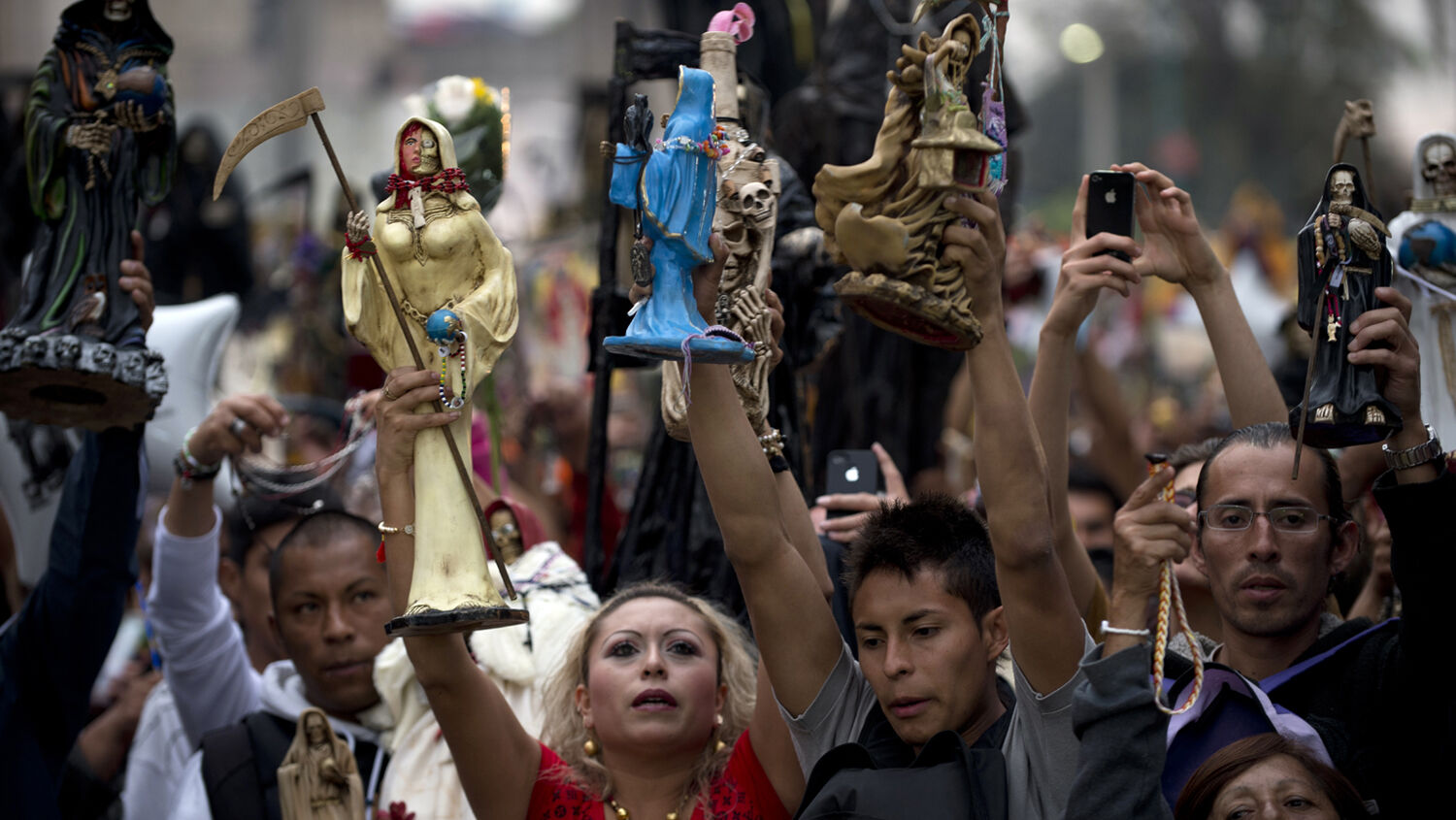 Devotees hold aloft their figures of Santa Muerte before the central altar, asking for favors during the main celebration in one of Mexico City’s most dangerous neighborhoods: Tepito.
YURI CORTEZ/AFP/Getty Images

An Aztec death cult is the fastest-growing religion in the Americas.

Jose Herrera-Guzman was murdered in Silver Springs, Maryland, on December 24. The 18-year-old was an illegal immigrant from Honduras. He was arrested for burglary last October, but county officials released him on $100 bail. He was found dead with multiple gunshot wounds after police responded to a shots-fired call.

While gang-related killings are not uncommon in sanctuary cities across the United States, Herrera-Guzman’s murder got special attention for a ghastly reason.

In a house Herrera-Guzman was sharing with other suspected members of the MS-13 street gang, police found a mask smeared with blood and a shrine to an Aztec death goddess. Before the Spanish conquest of Mexico, the Aztecs worshiped this goddess as Mictecacihuatl (Lady of the Land of the Dead). After Spanish colonists introduced the Grim Reaper and the Virgin Mary to Mexico, however, the locals combined these figures with Mictlantecihuatl to produce a pagan hybrid deity named Santa Muerte (Holy Death).

Depicted as a skeletal figured dressed in flowing robes, Santa Muerte was worshiped in Mexico during colonial times. But her cult died out, for the most part, after Mexico won its War of Independence in 1821. Over the past two decades, however, the worship of Santa Muerte has exploded in popularity. “She was unknown to 99 percent of Mexicans before 2001, when she went public,” Andrew Chesnut told Catholic News Agency in an interview. “Now I estimate there’s some 10 to 12 million devotees, mostly in Mexico, but also significant numbers in the United States and Central America.”

This makes the cult of Santa Muerte the fastest-growing religion in the Americas.

While most of its adherents live in Mexico, the cult spread to the U.S. around 2005. It is most prevalent in cities with a large population of illegal immigrants, such as Chicago, Houston, Los Angeles and New York City. But in other places, such as northern California, it has spread beyond the immigrant community.

Four human sacrifices related to the worship of Santa Muerta have been documented in the U.S. since 2006, according to an fbi Law Enforcement Bulletin written by Dr. Robert Bunker.

There is concern, however, that the type of ritual sacrifices performed in front of Santa Muerte shrines in Mexico may spread north. “For U.S. law enforcement agencies, the rise of a criminalized and dark variant of Santa Muerte worship holds many negative implications,” Bunker wrote. “Of greatest concern, the inspired and ritualistic killings associated with this cult could cross the border and take place in the United States.”

Only time will tell whether or not the threat posed by this specific Aztec death cult will intensify. But this horrific situation is an example of the natural consequences that come from breaking God’s law. If the American people hadn’t abandoned biblical family values, an entire generation of youth would not have turned to drugs and gangs as a form of escapism. If the proliferation of drugs had never happened, waves of illegal immigrants would not be pouring into the U.S., fleeing cartel violence in Mexico. Without the problems of drug addiction and illegal immigration, people across North America would not be facing the threats they are currently facing.

In the first chapter of Isaiah and the fifth chapter of Ezekiel, God reveals that cities will burn with fire, pestilence and widespread violence as a natural consequence of the people’s rebellion against His law. Be sure to read editor in chief Gerald Flurry’s book Ezekiel: The End-Time Prophet to learn what the Bible reveals about this building national catastrophe.

While other scriptures foretell the soon-coming peace and prosperity of all nations, the sad truth is that man will have to go through a time of intense suffering before he will accept God’s way.